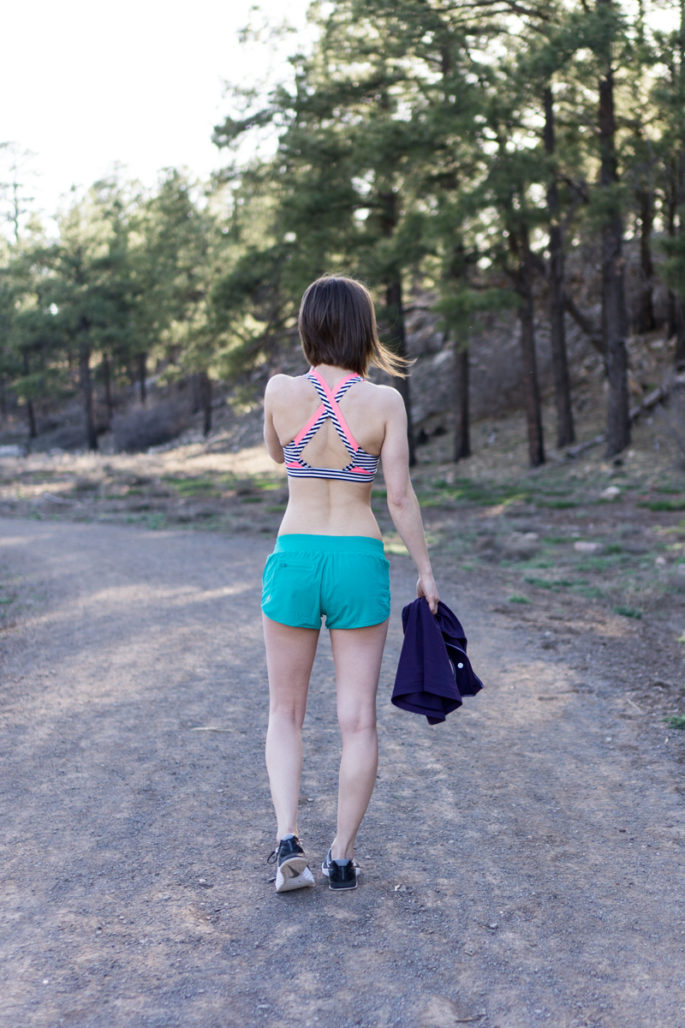 Anyway, here’s a recap of my training so far, how things have been going, and my plan going forward.

Each week, I run about 4 times.  As my mileage has increased, I’ve leaned more and more toward trail runs.  Occasionally I’ll do an easy run through the neighborhood if I’m pressed for time, but I’d say 90% of my mileage has been on trails.

Ideally, my week includes an easy run, speed work, a medium run, and a long run.  Here’s what those look like:

As far as I can tell, this assortment of runs is a pretty common strategy for half marathon training.

What isn’t common is that my plan has been fairly conservative, keeping me at a distance “block” for my long runs (e.g., 5-6 miles) for several weeks before I move to the next distance.  Since I had longer to train, this meant I didn’t have to aggressively increase miles every single weekend.  Increasing distance slowly has been ideal for me as a new runner.

What’s going well (and what’s not)

So far, my strategy of increasing long runs slowly has worked very well for me.  Spending several weeks running the same distance, that means I get very comfortable with that run length before I bump it up.  This has helped build my confidence as well as give my body plenty of time to adapt to the training.

A longer training plan has also given me some much-needed leeway.  It means I can take weeks where I dial back the mileage to rest and recover.  It also means that if I miss workouts because of traveling, work, or whatever other life things, it doesn’t completely ruin my training plan.

The most surprising thing about my training progress is the increase in my confidence as a runner.  When I first decided to tackle a half marathon, I expected it to mostly just suck a lot.  I expected to be shaky and slow no matter how much I ran, and I expected 13 miles to always feel daunting.

As I’ve progressed through the weeks, I’ve found that I’m no longer intimidated by my long runs.  In fact, I look forward to them.  I’ve been surprised by how many good runs I’ve had, including runs where I was running for over an hour solid without feeling like death.  That’s huge for me, and it’s forced me to even more deeply rethink my long-held conceptions of my limitations as an athlete.

I’ll reiterate here that I love how much more time I get to spend outside.  I’ve been checking out lots of new trails and enjoying all types of weather, even the “bad” weather.  Running gives me an excuse to get out the door day after day, even when I would normally sit at home.  All the fresh air and sunshine has had a noticeable effect on my overall mood.  I love being out alone running, just listening to music and letting my thoughts wander.

On the other end of things, I’ve admittedly been terrible about cross-training.  I go to my aerial silks class every week, which is good for maintaining my upper body and core strength, but most weeks I don’t manage to squeeze in other workouts.  I want to be more diligent on this front by throwing in some yoga and/or BBG workouts, but since silks and running account for 5 days of my week, it can be hard to muster the energy for more.

I’ve also noticed I’ve been getting slightly more achy as my mileage has increased.  Any aches or pains typically only last a day or maybe two.  I’m not sure to what extent this is just my body adapting, or if there are potential problems that I need to be nipping in the bud.  The jury’s still out on this one. 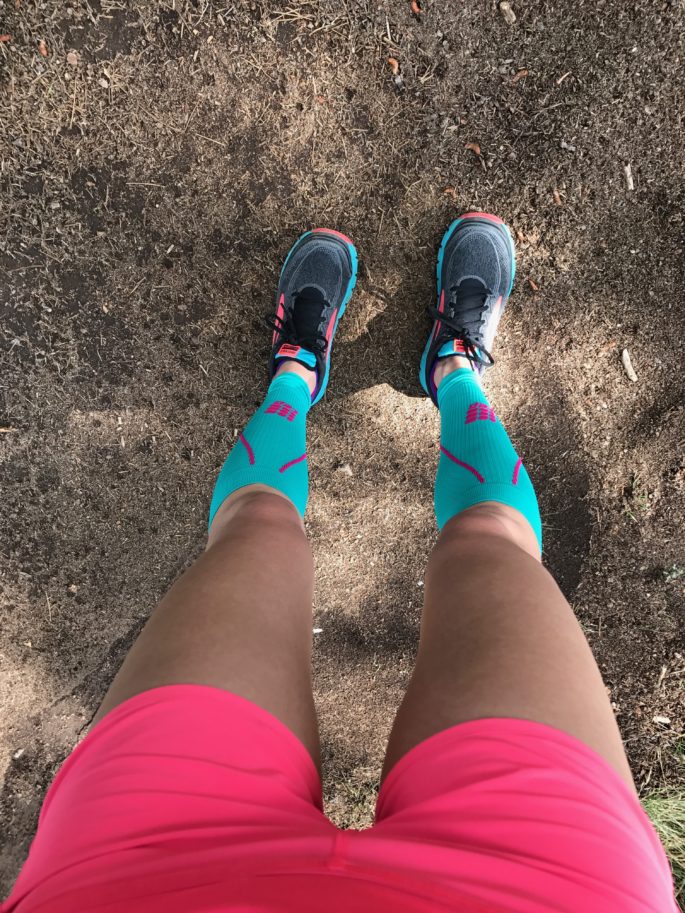 I’ve run 3 races this summer: a road 5k for my first race, and 2 trail 10k’s.  Each race was a wildly different experience.

In the first race (5k), I had a plan and executed it exactly as I intended.  I missed my time goal by 25 seconds, but everything else went so well that I couldn’t complain.

For the first 10k, I was in for a surprise.  I was expecting about 400 ft of elevation gain and ended up getting over 800!  It ended up being a very challenging course with hot sun scorching down during the hardest parts.  I was proud of myself for pacing the climb well, but even keeping it slow, the climbing eventually caught up to me and I had to walk for the last uphill segment.  My second wind started to set in as my legs loosened back up on the long downhill back to the finish line.  I ended up placing 1st in my age group out of 5 women (which I discovered later when the results were posted).  Although it wasn’t a fast 10k by ANY means, I’m glad I was able to hang onto my mental toughness…at least for like 95% of the race, anyway. :)

I did a second 10k this past weekend, which also didn’t go how I expected.  My legs didn’t feel great coming out of the gate and since it was a trail run, I kept getting stuck in traffic jams.  Then, a huge group of us ended up taking a wrong turn on the course where an intersection wasn’t marked.  I have no memory of even seeing the intersection, so I wasn’t blindly following the crowd so much as I didn’t even realize it before it was too late.  I ended up only running 5.4 miles instead of 6.2.  That said, I’m glad to have had a course mishap on a race where I didn’t feel great anyway.  I would’ve been pretty sad if it felt like a PR day and I had missed my chance.

Later this month, I’ll be doing a (steep!) trail 15k, which will be my biggest race and a nice warm-up for the half.  With 1,230 ft of gain spread out over 3 major hills, it’s going to be a challenging race, but I’m actually really excited for it.

The half marathon plan

After a lot of hand-wringing, I signed up for the Flagstaff Half Marathon on September 16th.

And let me tell you, this race is no joke.

Besides a half marathon worth of miles, this course accumulates 1,762 ft of elevation gain.  Adding to that, the minimum elevation is about 8,000 ft, where the air is pretty darn thin.  The course is 100% off-road through the aspen and pine forests of wild northern AZ, with a mix of single- and double-track.

So why did I pick this race?  A few reasons…

First, the home field advantage.  This race is local, which means I can sleep in my own bed, eat my own food, not to mention save time and money by staying close to home.

Second, since I’ve been running almost exclusively on trails, I started to get a bit sketched out by doing a half on roads.  Besides the fact that I like trails better, I was worried that switching to road for my longest run ever would be a bit jarring, both literally and metaphorically.  That said, finding trail-only half marathons that were a drivable distance (<6 hours away) and in my desired time frame was nearly impossible.

Lastly, as I mentioned above, my confidence has grown much more than I expected 3 months ago.  I had originally ruled out this race because it’s so tough.  Basically, I wanted to stack the deck in my favor and find a much less challenging course instead.  The main reason I was leaning toward an “easier” race was because of confidence concerns.  I wanted to do everything I could to make sure my first big race was a good one.  I didn’t want a bad race to discourage me from ever trying again.

Now, my reasoning has flipped the other way.  The fact that the race is so challenging makes it more appealing.  Even if it doesn’t go as perfectly as I imagine, I’ve built enough confidence that I could withstand the blow.  I like the idea of just going for it and testing what I’m really capable of.  So far, that’s been more than I ever expected, so why not step up to the challenge?

And on a more practical note, I think my training is appropriate for this race.  I already regularly complete runs with 700-1,000 ft of elevation gain, so I’ve been conditioning my body appropriately.  As I work through the back half of my training, I plan to continue incorporating plenty of climbing and high elevation runs to keep strengthening my legs and lungs.