I made my quarterly pilgrimage to a lululemon store this past weekend, and did some obligatory try-ons to share.  Here’s the first half–I’ll get the second half up written up in the next couple of days.  This installment focuses on some of the cold weather gear that’s recently been released. 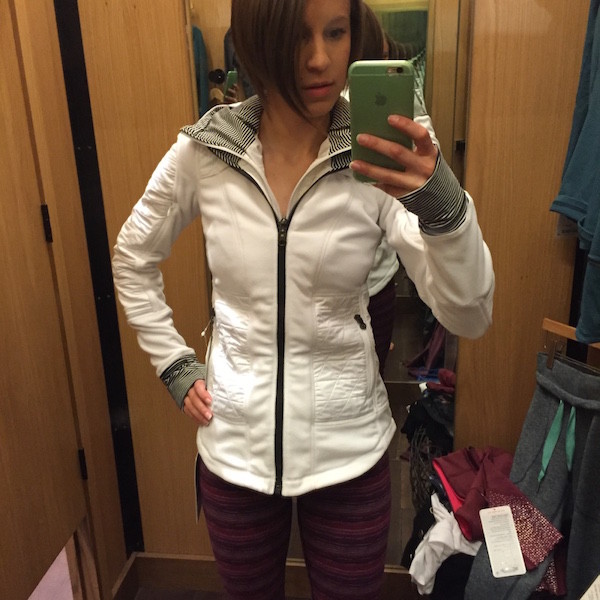 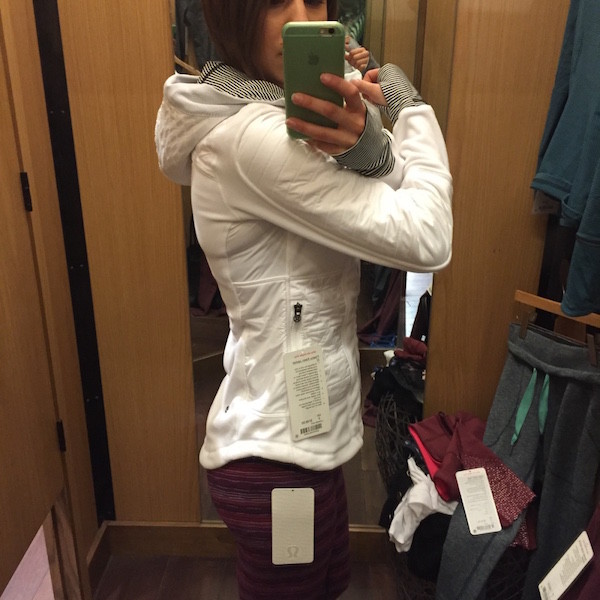 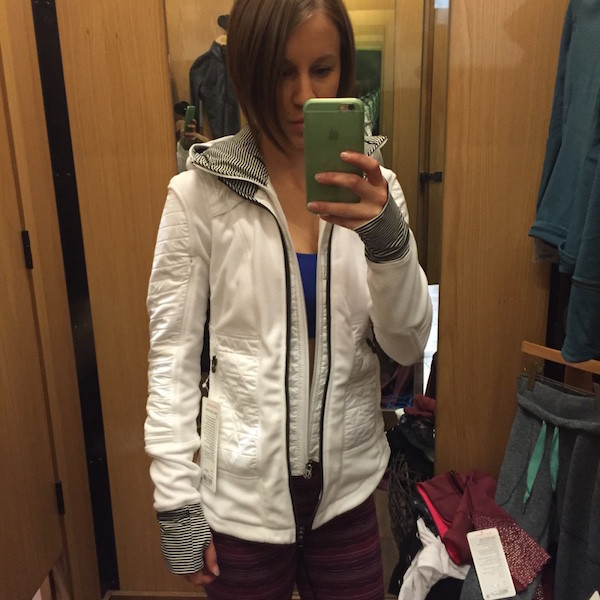 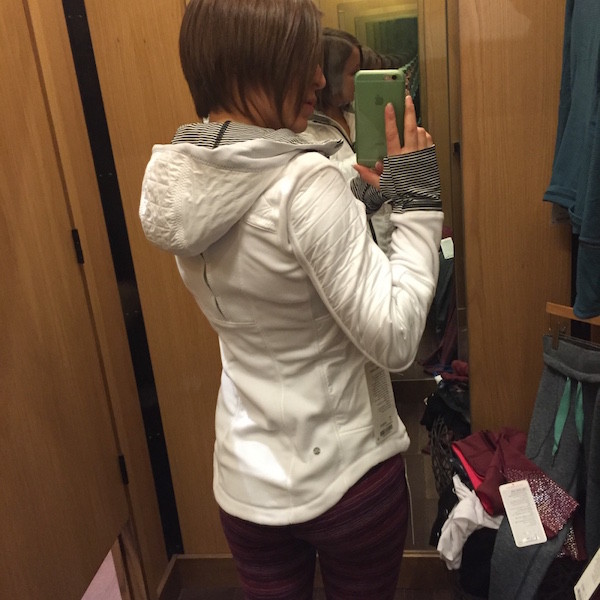 I had high hopes for this jacket after so many people raved about it.  I couldn’t help but pick up the white version to try, since it’s such a beautiful pure white.  I love all the details of this jacket.  There are so many thoughtful features as well as design motifs that really reinforce what lululemon does so well.  I love the contrasting pops of black throughout.  The jacket also felt very warm.  I got hot in the dressing room with this on even though I only had my energy bra underneath.  Warmth-wise, I’d say it’s actually pretty comparable to my fluff off jacket from a couple years ago (though of course I didn’t wear the fleecy keen out in the cold to tell for sure).

In my true size, the jacket fit well through the waist, bust, and shoulders.  It was nicely fitted and flattering while still leaving room for a layer or two underneath.  I don’t recommend sizing up, instead stick with your normal tank/top size.  Unfortunately, it fit me poorly at the hips: 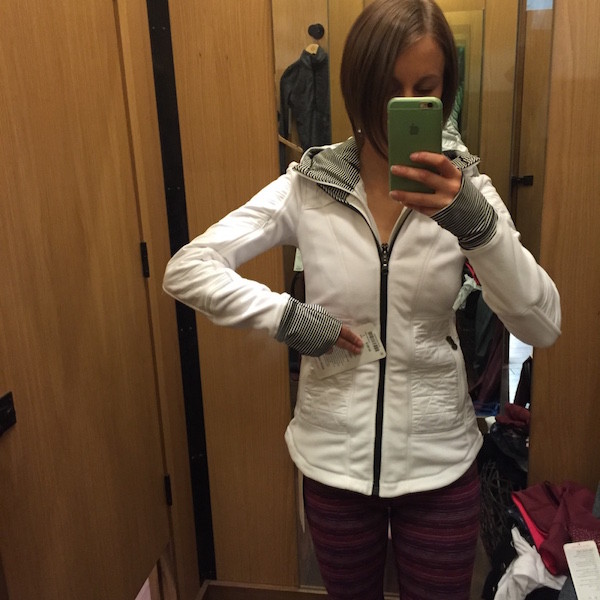 In this photo, you can see that there’s quite a lot of extra room at the bottom, where it flares out oddly.  I’m not a tall person by any stretch of the imagination, but it seems like this flare was intended to hit along the curve of the hip, when on me it was a couple inches too high.  Basically, the jacket was kind of shaped like an “A”.  If this wasn’t an issue, I would’ve had a hard time leaving it at the store.

In terms of fit and style, this jacket still beats the crap out of anything comparable I’d find at, say, REI.  Still, pretty as it is, I wasn’t prepared to throw down $200 bones plus tax, since the hips didn’t quite fit right and since the white probably would only stay white for all of 3 days. :) 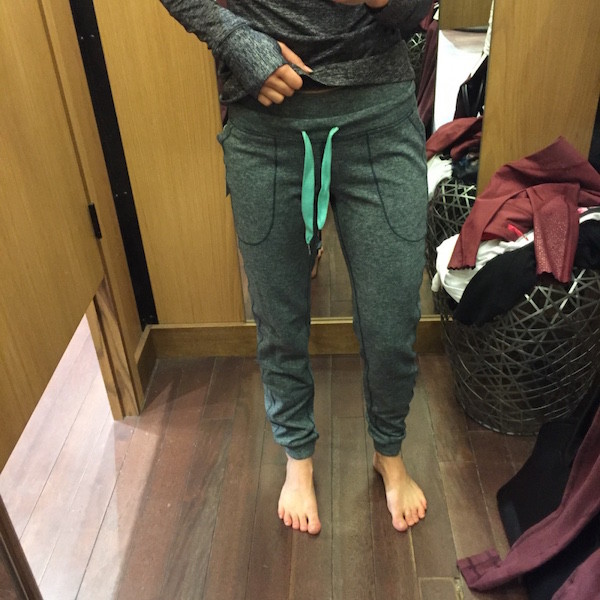 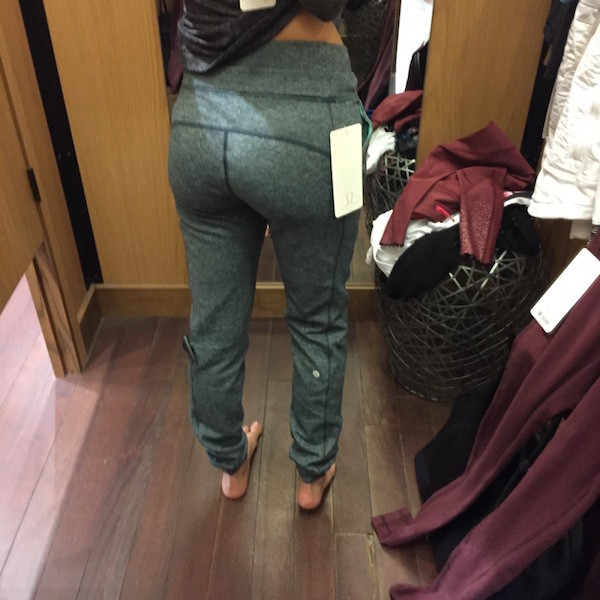 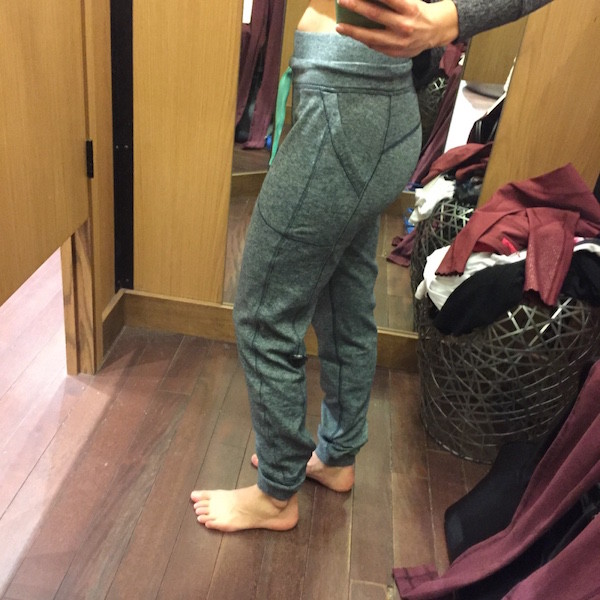 It’s hard to resist a pair of rulu pants.  The fabric is soft and cozy, like sweatpants but somehow better.  Everything about these pants screams relaxing.  The heathered fuel green does look pretty casual, but if styled right, it doesn’t have to look like you just rolled out of bed.  In my usual pants size, I have a bit of extra room throughout the leg and could layer crops or leggings underneath.  I felt like I could have comfortably sized down (had it been available) for a somewhat more tailored look.  What killed these pants for me is everything below the knee.  Because they’re too long for me, they end up stacking above the cuff, and because of that cuff, it would be an ordeal to have them hemmed.  If these had been a tapered leg with a plain, hemmable cuff, it’d be a much easier sell for a shorty like me.  My rolldown sweats from Alala are similar enough, so I’ll stick with those for now. 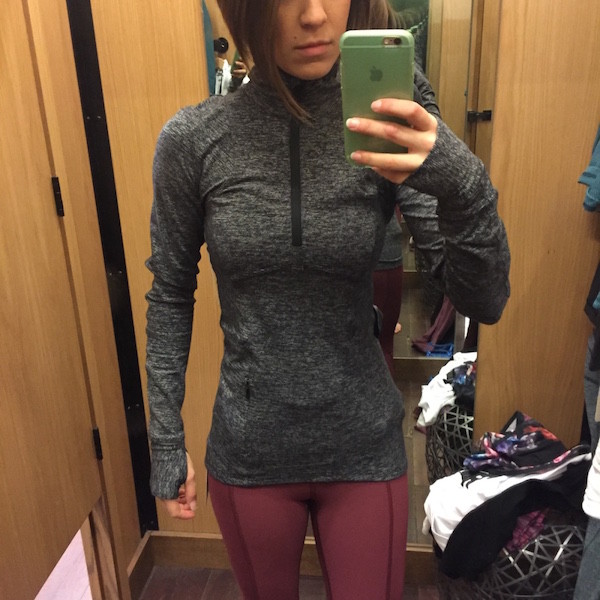 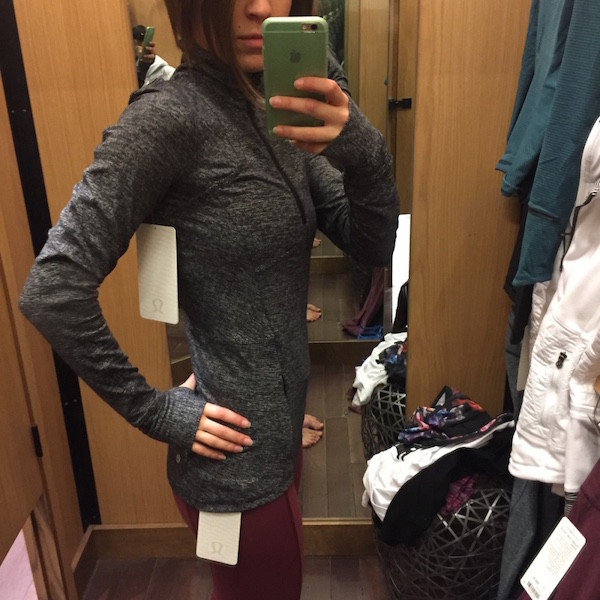 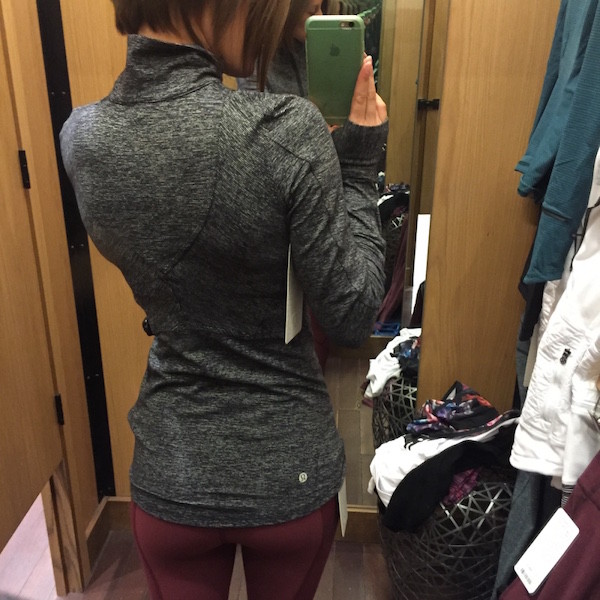 Some have said this year’s rulu has been going downhill compared to the quality of years’ past.  I can’t say that I totally disagree there.  I touched the white herringbone and heathered sapphire kanto 1/2 zips on the hanger, and I thought both felt bad.  They weren’t very soft, and the heathered sapphire especially felt quite thin.  I do recommend avoiding the heathered rulu colors for that reason.  The wee stripe definitely felt the best out of those three, and generally felt close to older rulu.  Overall, this is a decent top.  It fits pretty well, the length is just right, and the seaming at the bust didn’t bother me as much as I thought it might. 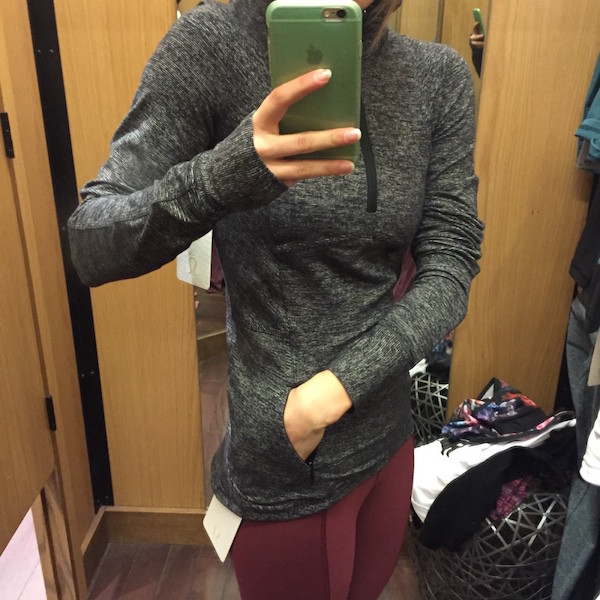 It also has a generously-sized zip pocket.  The pocket opening sits at the front and wraps around the side, though it’s pretty inconspicuous when zipped closed.  There’s also the obligatory cuffins.

That said, overall I prefer the look of last year’s race your pace 1/2 zip (for comparison, pics of the RYP are here).  That one had a more flattering curved seam at the waist, and the rulu was more consistently good last year.  If I were to spend the money, I’d probably rather hunt down last year’s iteration than buy this one new. 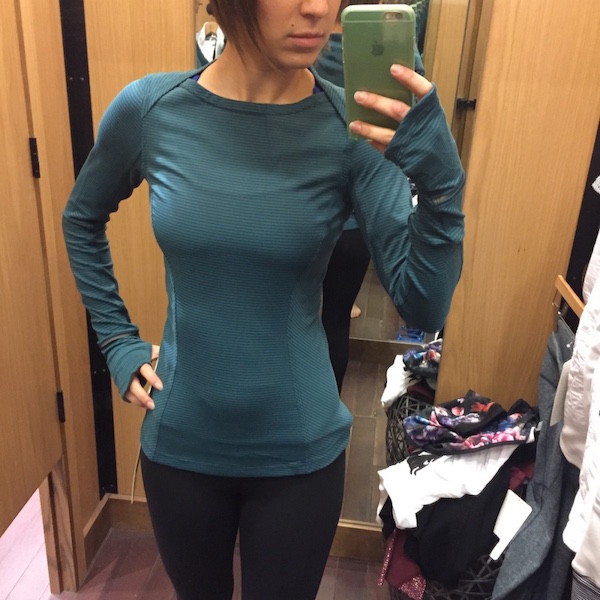 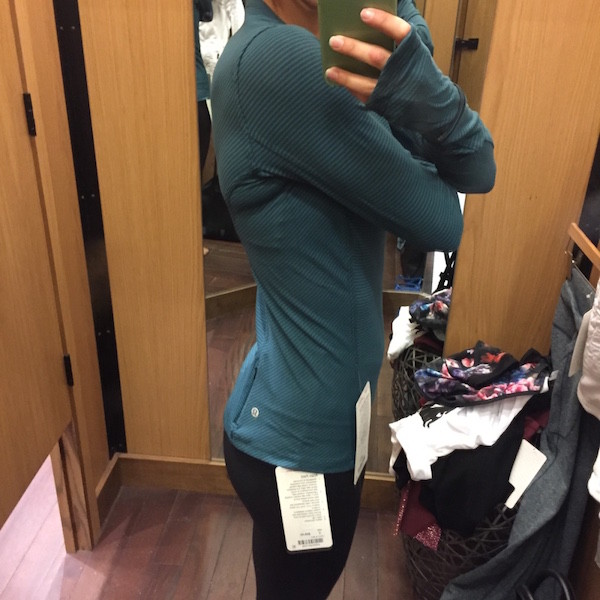 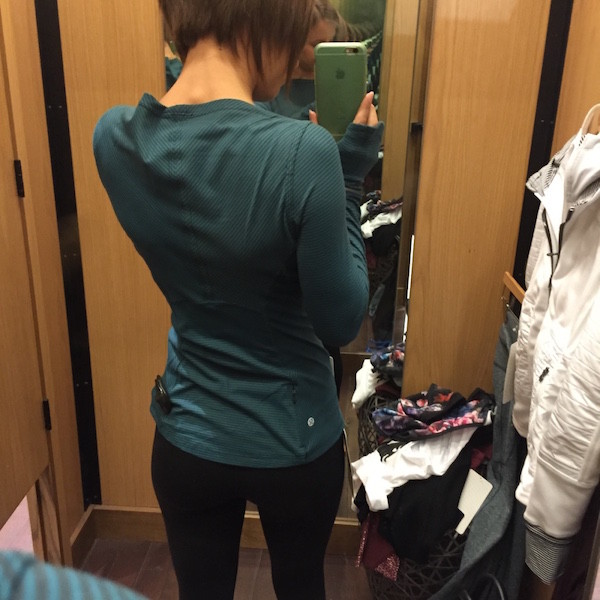 Along a similar note, I also tried out the kanto catch me long sleeve.  This had a really nice fit.  The front seams are nicely and flattering, and the neckline is flattering, albeit reminiscent of a baby onesie.  This one also has a little zip pocket in the back as well as reflective details near the wrists. 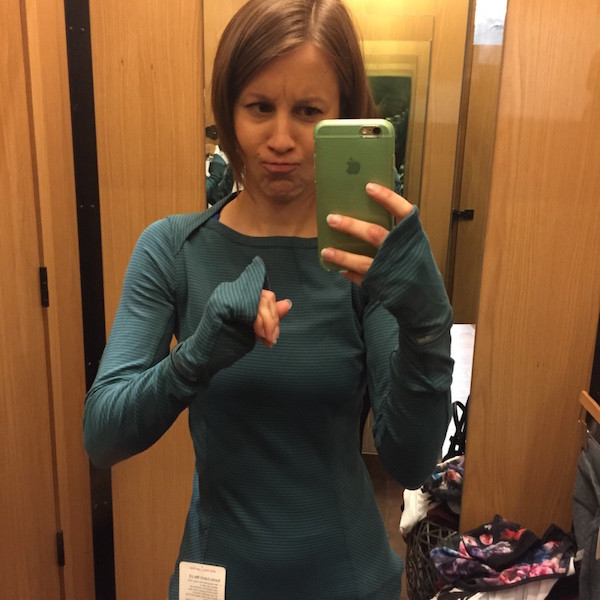 Lulu tried to incorporate extra coverage on the hand so that this actually covers the middle knuckle of my fingers.  This is nice in theory, but in practice ended up being strange-looking and reminiscent of a duck bill.  And yes, it did flare even if my hand was straight.  I imagine the extra length here would also mean it’d be hard to pull the cuffs out of the way when you’re not using the thumbholes.  If you took away the weird cuff flare, this would’ve been my favorite rulu LS in a couple of years (I didn’t love either last year).  Next time, lulu, I say stick with cuffins!