The past few weeks there have been just too many interesting newbies pass up.  Here’s what’s caught my eye from the fitness fashion universe lately: 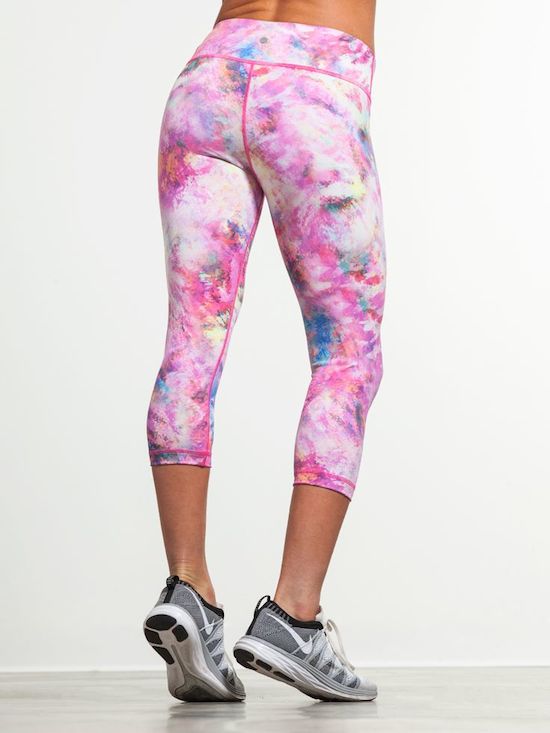 This new abstract print from Vimmia is just so pretty.  I haven’t been able to find a print name yet, but it reminds me of something between crushed makeup and an expressionist painting.  I love the color scheme.  Most printed fitness bottoms are made from a polyester blend, which can be a slimy, sheer mess sometimes, but Vimmia’s are all nylon.  Even just since last year when I first discovered Vimmia, their aesthetic has evolved quite a bit, and I’ve really been liking some of their styles lately.  I’m itching to give them a try, especially their bottoms. [Photo via Carbon38] 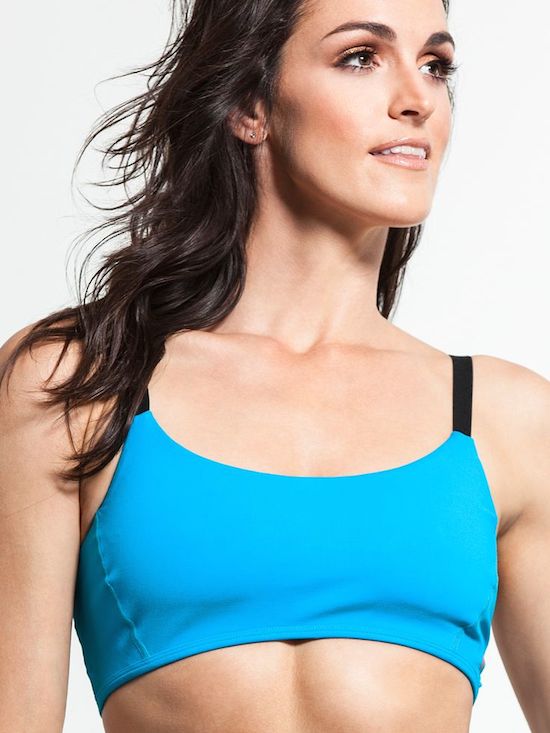 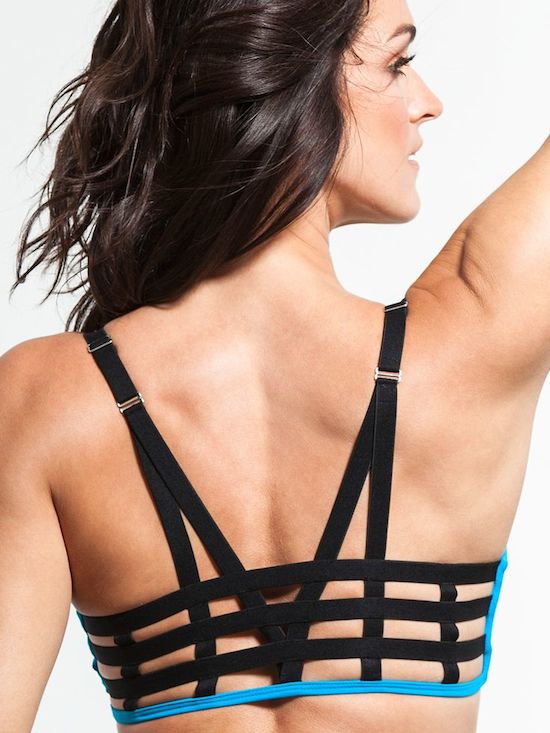 Another style I really love is the spirit bra, which is newly available in the same print above as well as this (gorgeous!) new shade of blue, bali.  You might notice that the cage back has a lot of similarities to lululemon’s hot spell bra (and the more recent wanderlust shala bra).  I’ll let you be the judge of whether they’re too similar.  I like that they’ve incorporated adjustable straps, and the double strap, “M” shape is kind of cool.  It’s definitely more of a yoga/low impact bra, since the band looks pretty skimpy.  Unfortunately, though their crops and leggings are priced pretty decently, the bras are pretty spendy at $80+ a pop.  Probably too much for me to justify for something that wouldn’t have enough support for my usual daily workouts. 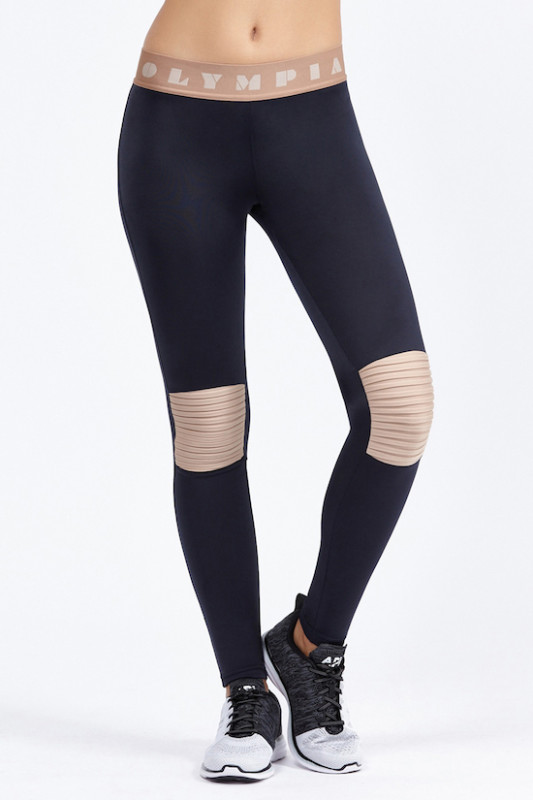 A few weeks back, Olympia Activewear released a mini-collection of special edition summer product.  The summer designs include a different design of their custom elastics, a new navy, and riffs on their current Collection 2015 styles.  I really like the look of these navy/nude moto leggings and the model at Bandier (above) makes them look really nice.  I already have a pair of moto leggings in iron, but of course that hasn’t stopped me from pining after another color.

You can find Olympia’s summer collection in full on their website, with some pieces available via Bandier and Carbon38. [Photo via Bandier] 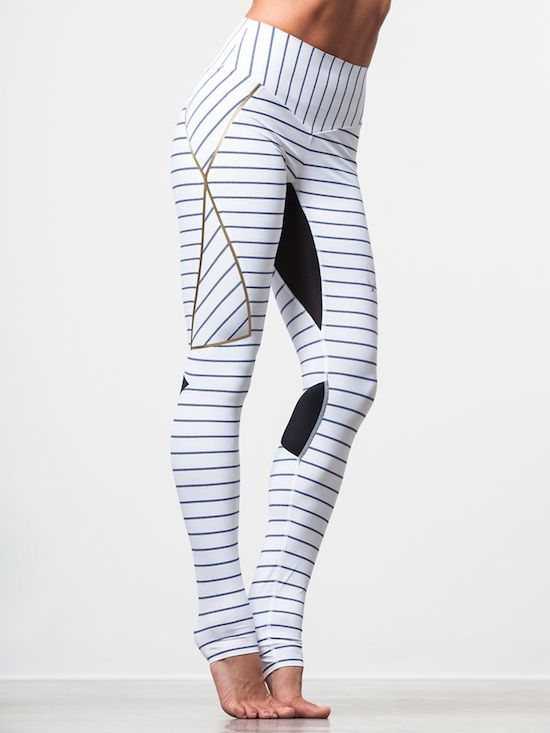 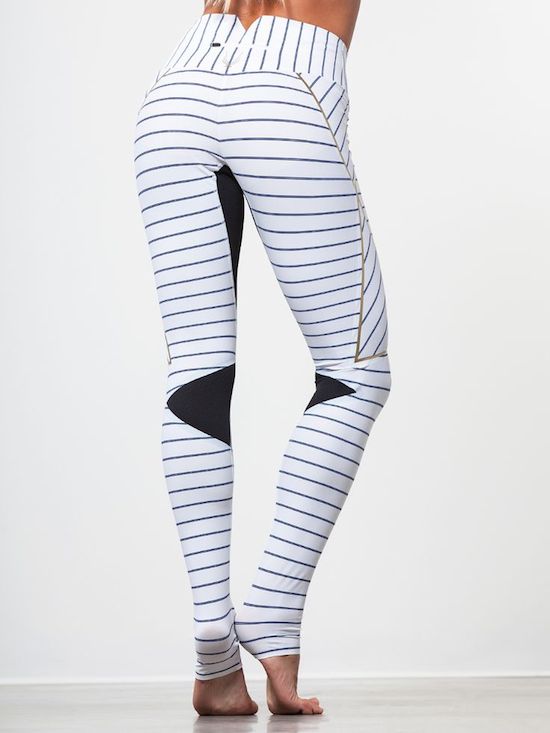 Call me crazy, but I am seriously hung up on these new midnight pinstripe nordica leggings from super-premium UK brand Lucas Hugh.  I spotted these on LH’s website last week when I was checking out their new fall line, which is gorgeous (see it here).  The pinstriped nordicas really take the cake for me; I love the metallic gold accents and angular details.  The pinstripe motif is reminiscent of the infamous quiet stripe, though they’re obviously very different. (Notably, these nordicas don’t have the stripe angle at the butt that QS are in part famous for.) I had been searching and searching for a US stockist but hadn’t found one, so I was pleased when an email from Carbon38 came this weekend saying these very leggings had just been uploaded to their website.

At the ultra-luxury price point of $420 (yes, really), these pants are anything but a casual purchase (though somewhat ironically, about the same price as a pair of QS).  LH talks a little bit about the tech that makes their fitnesswear so special, so on top of loving this design, I’m also really curious how much better they actually are (or aren’t?) than their more modestly priced competition.  I haven’t been able to stop lusting after these since I first laid eyes on them and it’s becoming a liiittle bit of a problem.  Maybe some strategic deal hunting (or perhaps selling an organ?) will bring these into the realm of possibility–I’m not ruling it out…

So far, I’ve only found the pinstripe nordica leggings stocked in the US via Carbon38, though Shopbop has the crops version (which I admit I don’t like nearly as much).  The leggings are also available via the UK on the Lucas Hugh website. [Photo via Carbon38] 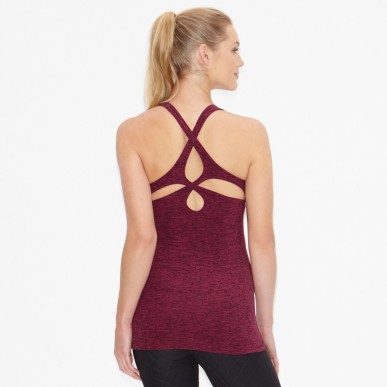 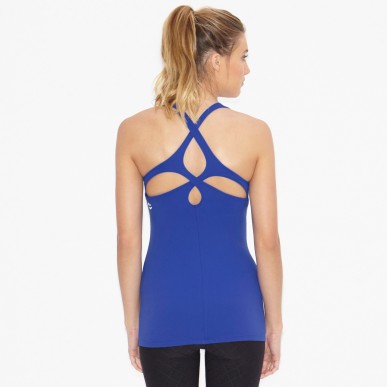 Beyond Yoga is already starting to drop the first bits of their fall collection.  The main colors so far are lapis, wildberry, port, and wintergreen–all very fall-appropriate colors for sure.  BY has also been branching out into prints territory, and the fall collection includes a couple of those, too.

A bunch of these new colors in the cut-out cami were added to their website this week.  This design is pretty cute and I’ve noticed it’s sold fast in other colors.  There’s a heathered version as well as a solid one.  You can see more of what’s new for fall here.

Btw, if you like this look, you can also get a somewhat similar design, minus the built-in bra, from Titika.  Lorna Jane also has this acrobat tank that’s a bit similar too.