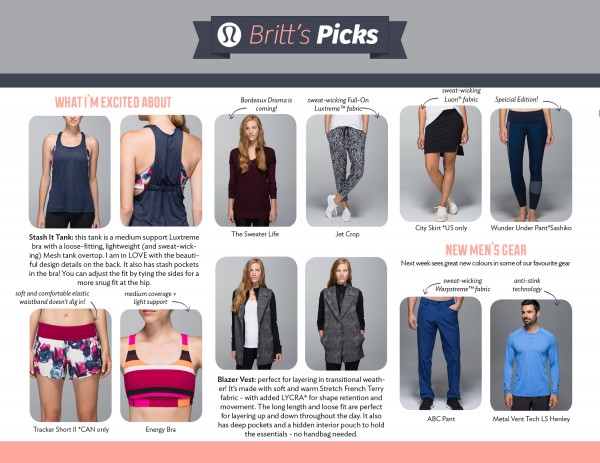 Britt’s picks this week has some old news, but still a few new things to keep an eye out for.

The blazer vest is aptly named–looks like your dad’s blazer with the sleeves cut off. :) Odd that it looks like it’s coming in the burlap texture, since I thought burlap was over a while back.  Also, this is another item demonstrating lulu’s recent love affair with oversized pockets.  I’ll be interested to see what this looks like on people–if it’ll look cute or just massive and awkward.

Another thing I thought was over: pretty palm.  That’s coming in new jet crops, which look like yet another tapered, saggy-crotch lounge pant, but this time in luxtreme.

Tracker shorts are coming in the inky floral print and the energy bra will be coming in blossom stripe.

Another new luon skirt: the city skirt, which has a split on the sides so that the back is just a little longer than the front.

Lastly, funky patchwork wunder under pants: the patches look like they’re made up of the sashico patterns and grey.