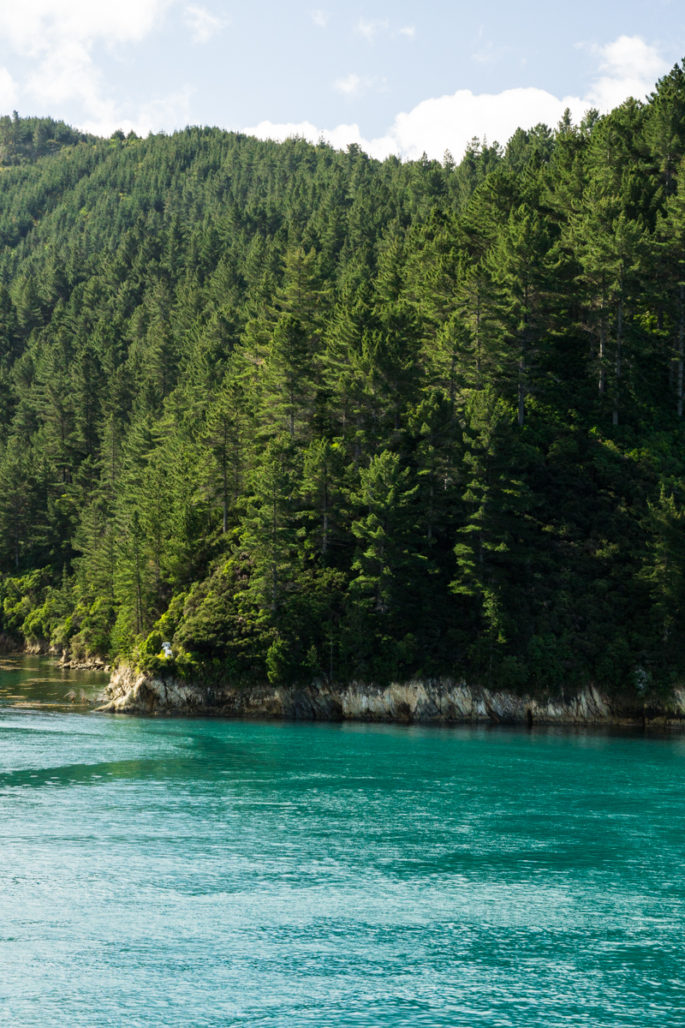 After our wedding in Yosemite, we boarded a plane for the second leg of our adventure: New Zealand!  I started dreaming of visiting New Zealand  when I was a young girl, so I couldn’t have been more excited to take this trip.  When we first started talking about honeymoon destinations, we both had NZ high on our list, but we thought it would be too expensive.  Once we looked into it, we realized it was a lot more affordable than we thought.  After finding a great deal on nonstop flights from San Francisco, we were in business!

Against our better judgment, we packed both the North and South Island into just 10 days.  For this first post, I’ll be talking about our time on the North Island, then I’ll follow up soon with a post covering the South Island.

Before I dive in, I have a couple quick side notes for you.  Lululemon’s mega-popular tech mesh tights are back as of yesterday!  If they’re on your wishlist, grab a pair before they’re gone!  On the sale front, Sweaty Betty’s end of season sale is underway, as is Athleta’s semi-annual sale.  The deals on both of these sales are always fantastic. 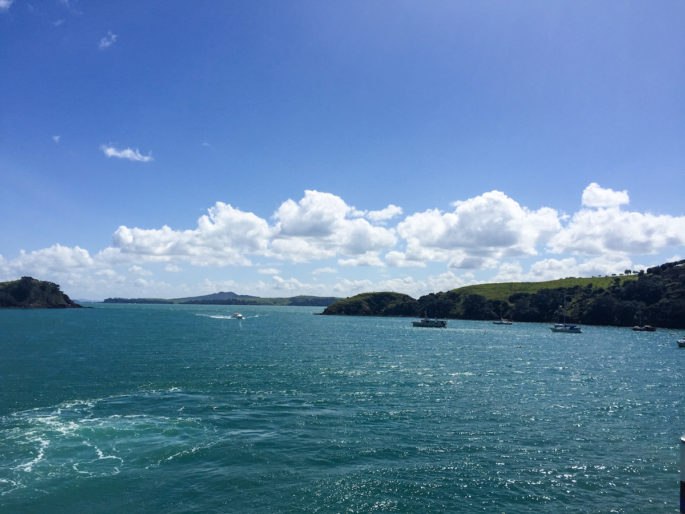 After our flight was delayed several hours in San Francisco, we finally touched down in New Zealand around 10a local time.  Although I was thrilled to finally be there, getting to the hotel was easily one of the most stressful parts of our trip.  We had never driven on the lefthand side of the road before, we were dead tired, and I had trouble getting my phone’s international data up and running.

Finally, we made it to our hotel in downtown Auckland.  Fortunately, our room was ready and they let us check in early.  Taking a shower after such a long day of travel has to be one of the finest things in life.  It was so hard to resist the urge to nap, but I was determined to stay up until a reasonable bedtime hour to avoid jet lag. 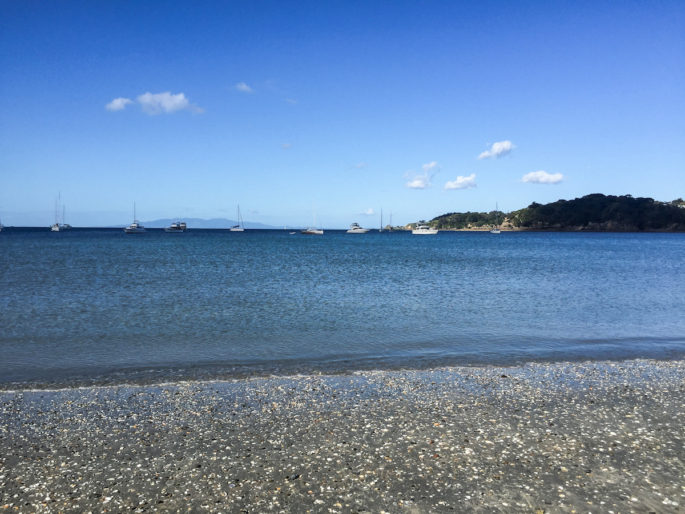 Since our energy levels could best be described as “zombie”, we wanted to do something pretty low key.  We walked down to the harbor and boarded a ferry to Waiheke Island.  Waiheke was a beautiful and quaint little spot with rolling hills, pretty beaches, and lots of wineries.  Unfortunately, most of the wineries were closed by the time we arrived.  Oops!  Instead, we grabbed a late lunch at a brewery instead and walked around some of the little towns.

By the time we made it back to the hotel, I couldn’t have been happier to call it a day and go to sleep.

The next morning, we woke up early to head to Matamata.  My will to stay awake paid off and I already felt adjusted to local time.

As a teenager, I was a huge Lord of the Rings fan, so the LOTR-related attractions were a must-see for me.  I’ve wanted to visit the filming sites for about 15 years since the trilogy was first released, and I was NOT going to miss seeing The Shire!  The Hobbiton movie set was a long drive from Auckland–almost 3 hours each way.  We quickly learned that roads in New Zealand are nothing like roads in America.  Turns out, NZ “highways” aren’t so much highways as small, winding, two-lane roads through the countryside.

We also quickly learned just how many sheep are in NZ.  So. many. sheep.  From what we see, it seemed like the majority of the North Island is basically green, rolling hills used for farming. 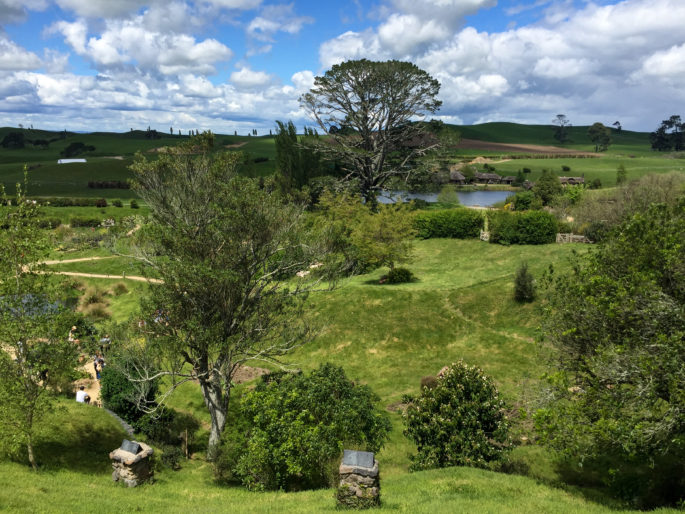 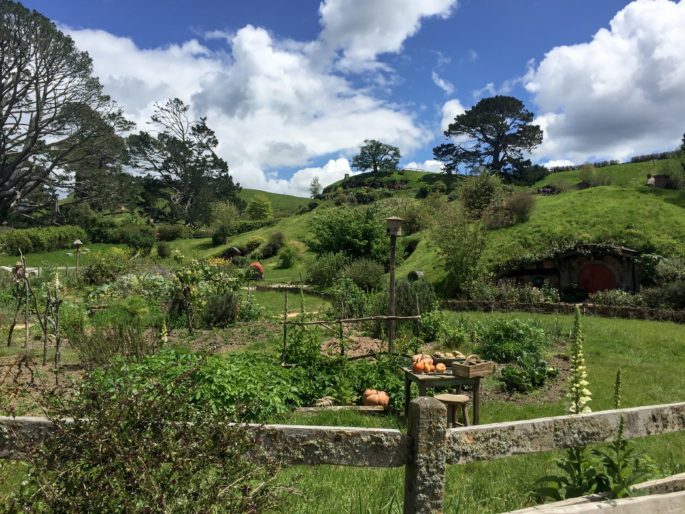 Once we arrived and started our tour, I was struck by how detailed the movie set was maintained.  There were flowers and plants growing everywhere, and lots of props set outside the many hobbit holes.  It really was like a tiny little village out there.  It was definitely one of the more touristy activities we did, but it was totally worth checking it off my bucket list. 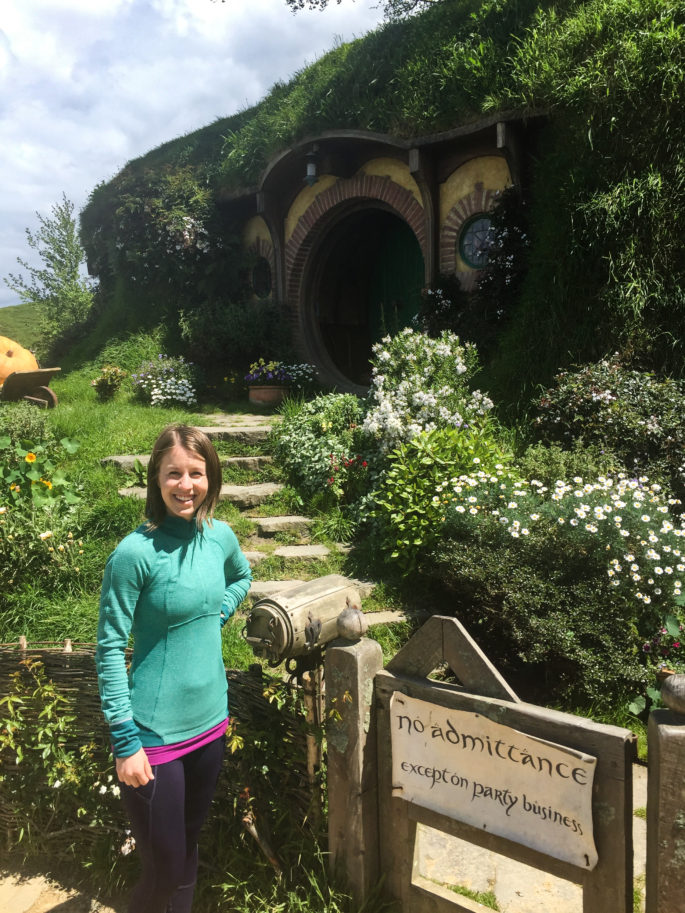 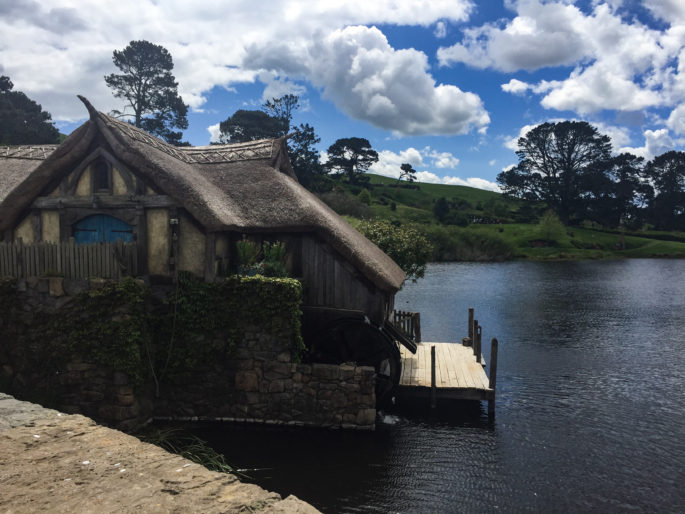 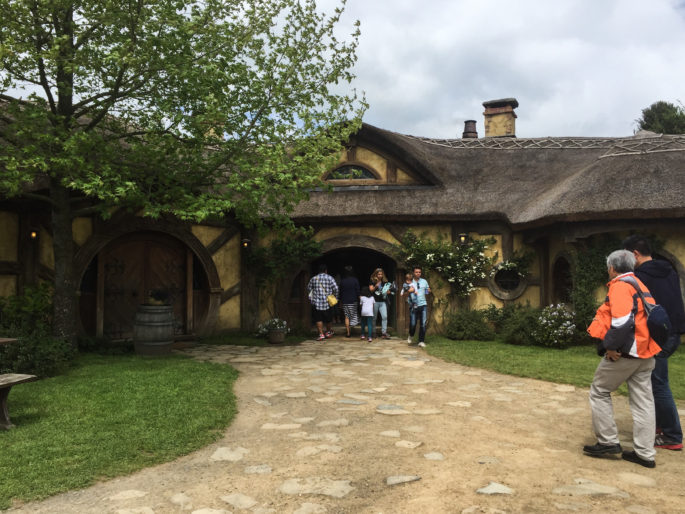 If you’re a bit of a nerd yourself, or you just have a good memory, you might recognize a couple of these famous spots in Hobbiton. :)

After the tour, we rushed back to Auckland.  We had tickets to see the All Blacks face off with Australia in a rugby match.  After grabbing a quick bite to eat at the hotel, we took a bus out to the stadium.

Ironically, I had heard locals complaining that the tickets for the match were too expensive.  We sat in the 7th row(!!) and paid a bit less than $100 USD per ticket.  For a major sporting event in America, you couldn’t even walk in the door for $100, much less get such amazing seats.  I certainly wasn’t going to complain! 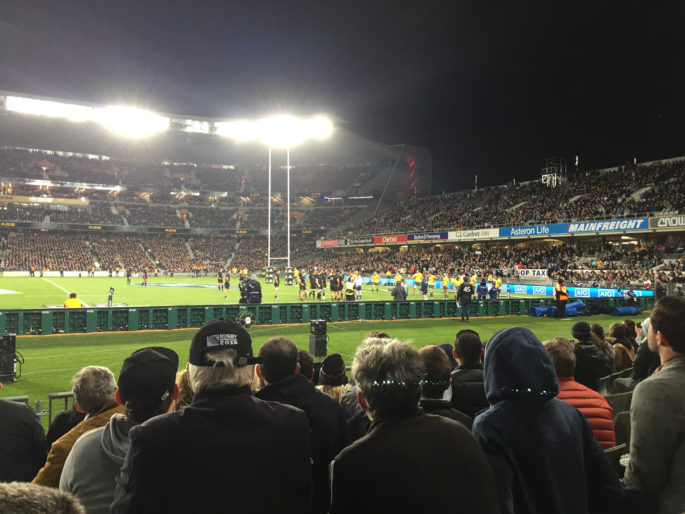 I’d never seen a live rugby match before, but it was so exciting to watch!  The All Blacks performed their traditional haka before the match, and then dominated when the match began.  It was really fun to be a part of a local tradition.

We woke up bright and early at 5a to say goodbye to Auckland.  Since it was too early for normal breakfast hours, the hotel staff were kind enough to provide us with sack lunches at checkout.  Each lunch had loads of food, so we reserved some extra for the hike we had planned for Day 4.  It was perfect since it saved us the trouble of having to make an extra trip to find backpack-friendly lunch. 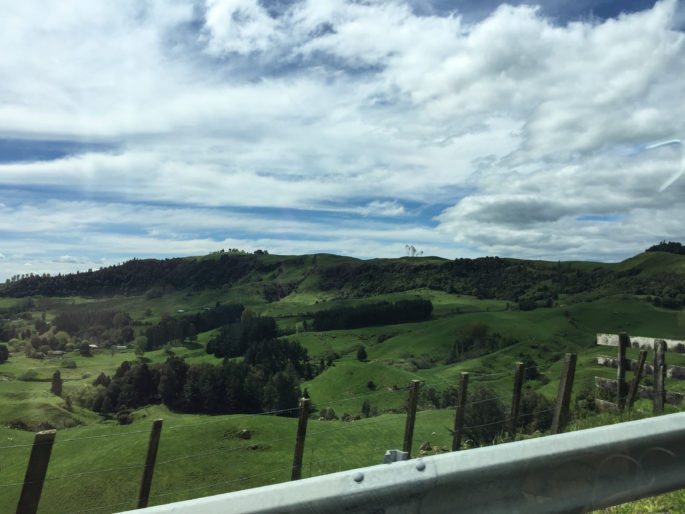 We drove about 3 hours (more rolling hills! more sheep!) to Waitomo to check in for our tour.  Waitomo is home to glow worm caves, where little bioluminescent creatures light up the night of the underground.  The area is carpeted with green, rolling hills, but there are small openings that reveal a maze of caves underground.  You wouldn’t know they were even there!

We booked a 5-hour underground adventure through The Legendary Black Water Rafting Company.  The cave tour was WILD.  It really pushed my limits in about 600 different ways.

For our first challenge, we rappelled (or “abseiled”) about 100 ft down.  Basically, you go out onto a platform, attach your harness, and then just sort of lower yourself down this massive hole in the ground.  A little scary, but not awful.

The worst part came just a few minutes later.  The tour company provided tubes for us to float along the stream that runs inside the caves.  Well, to get into the river, we had to jump about 8 ft into the freezing, black river.  I’ll be the first to tell you I am not an adrenaline junky, plus the idea of jumping into cold water sounded…well, not appealing.  So, I wasn’t exactly eager.

After a lot of coaxing from one of our guides, I begrudgingly jumped into the water.  I was wearing a thick wetsuit, but trust me, you still very much feel the cold!  Once we all were situated in the water, our guide took us upstream to a nook in the cave with an incredible colony of glow worms.  We floated down the cave for a while, admiring the starry night on the walls of the cave.

For the last part of the tour, we ditched our tubes and trudged through the underground river, sometimes waist-deep in water, and sometimes with just our boots splashing the surface.  We made our way through nooks, waded over incredibly rocky terrain, and finally climbed straight up a couple of small waterfalls.  I was wet and mildly cold the whole time, so toward the end of our tour, I was getting pretty chilled.  I couldn’t have been happier to see the sunlight overhead after hours trudging around the caves!

After peeling off our wetsuits and warming up, we got back in the car to drive the remaining 3 hours to a town just outside Tongariro National Park.  We stayed in the Adventure Lodge, a simple but ideal spot for the night before our hike.  During our trip, we alternated between pricier, fancier hotels and inexpensive options like this one.  That meant we could still make the trip special without totally breaking the bank, and it worked really well for us. 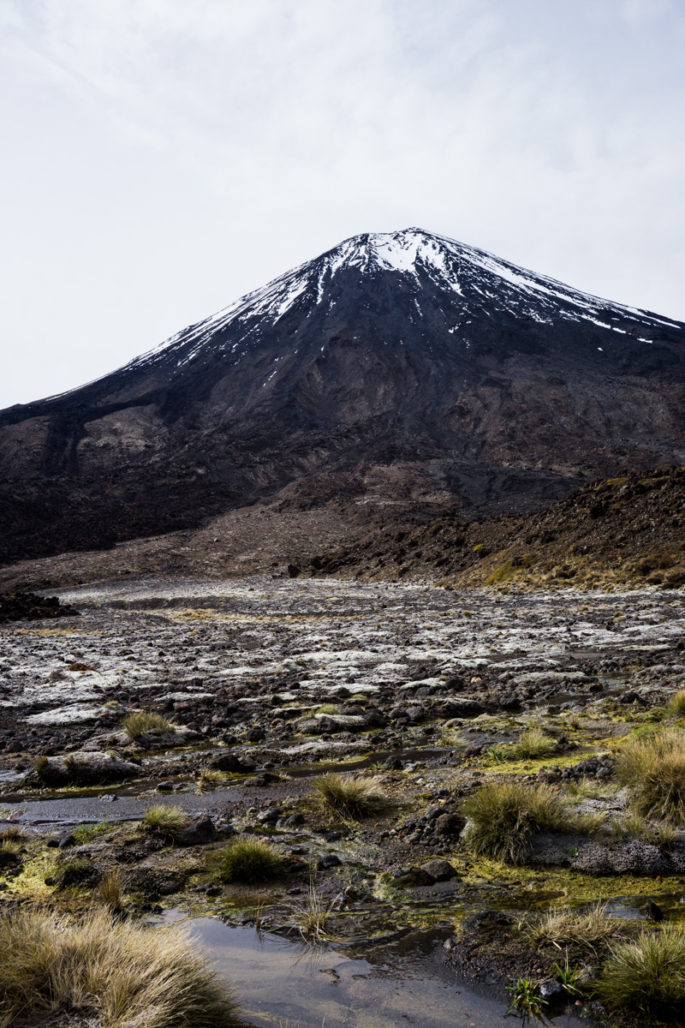 This day was our biggest and baddest physical challenge.  After the lodge owners cooked us a hot, hearty breakfast, we were off to hike the Tongariro Alpine Crossing, a one-way, 19.4-km (12-mile) trek across some of the most varied terrain I have ever seen.  In addition to the 12 miles, we added on a trek to the summit of Mt. Ngauruhoe (pictured above).  Although I’ll share more about this later in a separate post, suffice it to say that summiting that volcano was probably one of the scariest and most challenging things I’ve ever done. 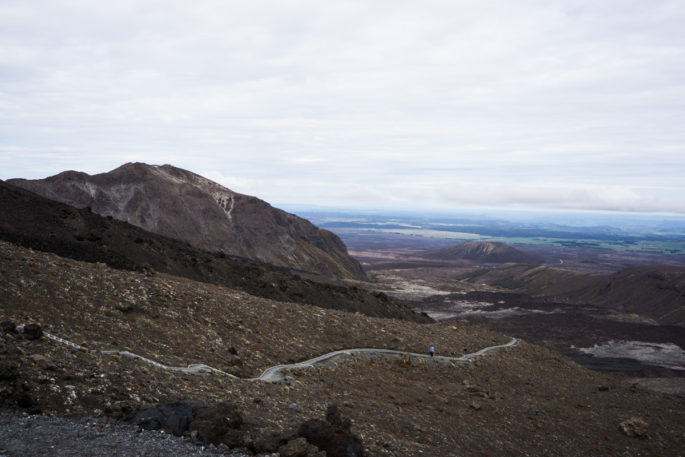 Overall, we hiked about 15 miles for a total elevation gain of 5000 ft (plus the descent!).  It was one of my most grueling days of hiking ever, but also one of the wildest and most unique.

But because we had such a packed itinerary, our day wasn’t over yet!  We dragged our aching bodies into the car for another 4 hours of driving to Wellington.  We met an Australian couple on the trail who had highly recommended a particular pizza place, but since we didn’t arrive til 9:30p, it was already closed.  Instead, we stumbled into the hotel, ordered room service, and called it a day. 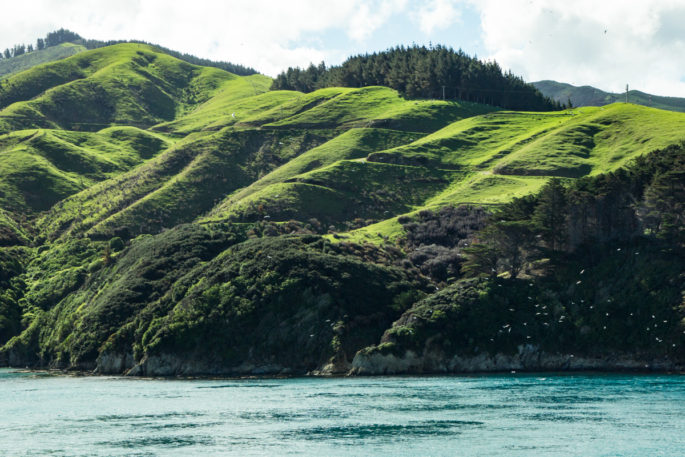 After sleeping the sleep of the dead, we emerged from our Tongariro-induced coma to explore a little bit of Wellington.  Wellington was a delightful (and clean!) little city full of interesting nooks and beautiful coastal scenery.

After breakfast at a little coffee shop called the Flight Hangar, we popped into the Te Papa museum.  We learned a bit about New Zealand history, culture, and wildlife.  And, I dropped a couple hundred bucks on gifts and souvenirs at the shop. 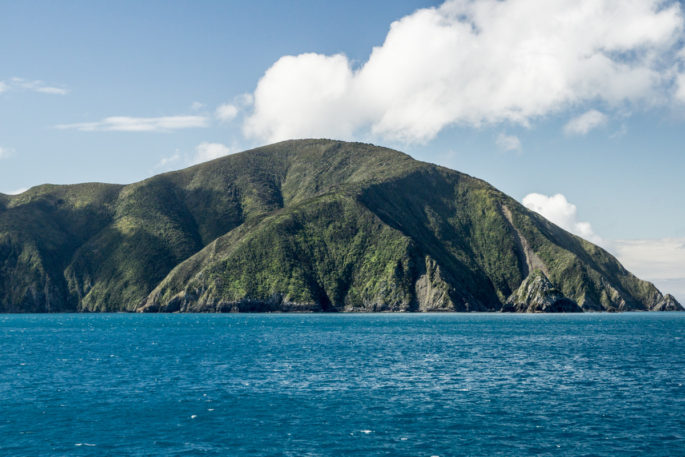 After our morning of exploring, we caught the ferry to the South Island.  The ferry was huge, basically the size of a small cruise ship.  Besides being a necessary form of transportation, the ferry ride was a delight in and of itself.  As we made our way closer to the South Island, the clouds lifted, giving way to a sunny, beautiful day.  There was never a boring moment of the 3-ish hour journey.  I stood outside on the deck almost the entire time, tolerating the biting wind to practice my photography and admire the view. 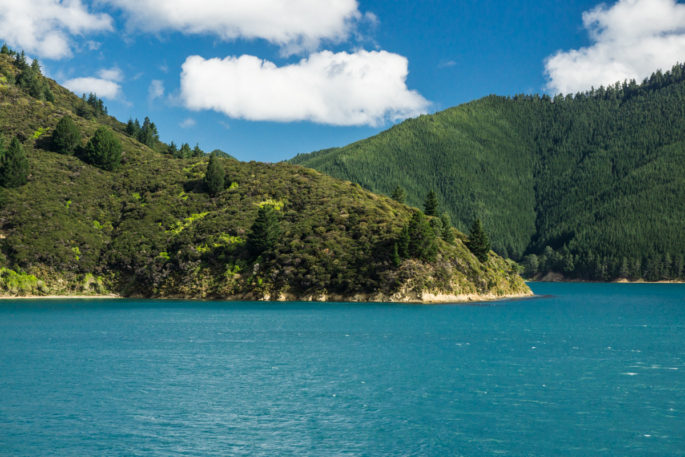 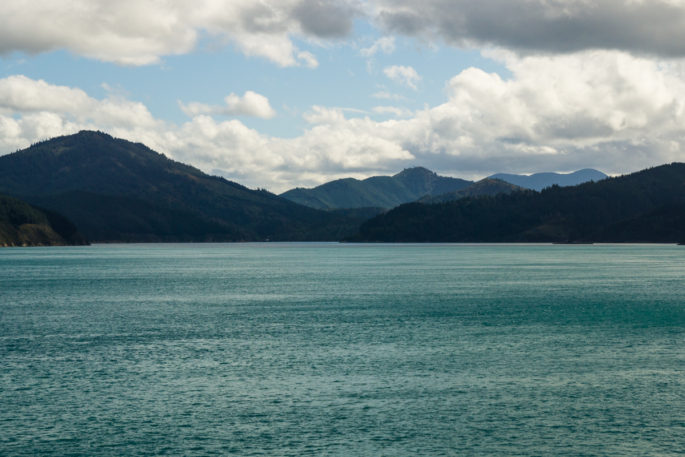 After a meal in Picton, we drove past endless vineyards nestled at the foot of the mountains.  Turns out, wine is a pretty big industry in NZ!  After an hour and a half’s drive, we arrived in the teeny-tiny town of St. Arnaud.  Let me tell you, I thought I knew small towns, but NZ takes small towns to a whole other level.  This was a recurring theme of our NZ travels.  Even the “big” towns and cities were smaller than I expected.

We had a room at the Alpine Lodge, a rustic, older hotel.  Since it was the off-season, there wasn’t too much tourist traffic in St. Arnaud, which also made our hotel room very inexpensive.

With another busy day in the books, we collapsed into bed to rest up for the next thing.

Stay tuned for a recap of the mind-blowing South Island!