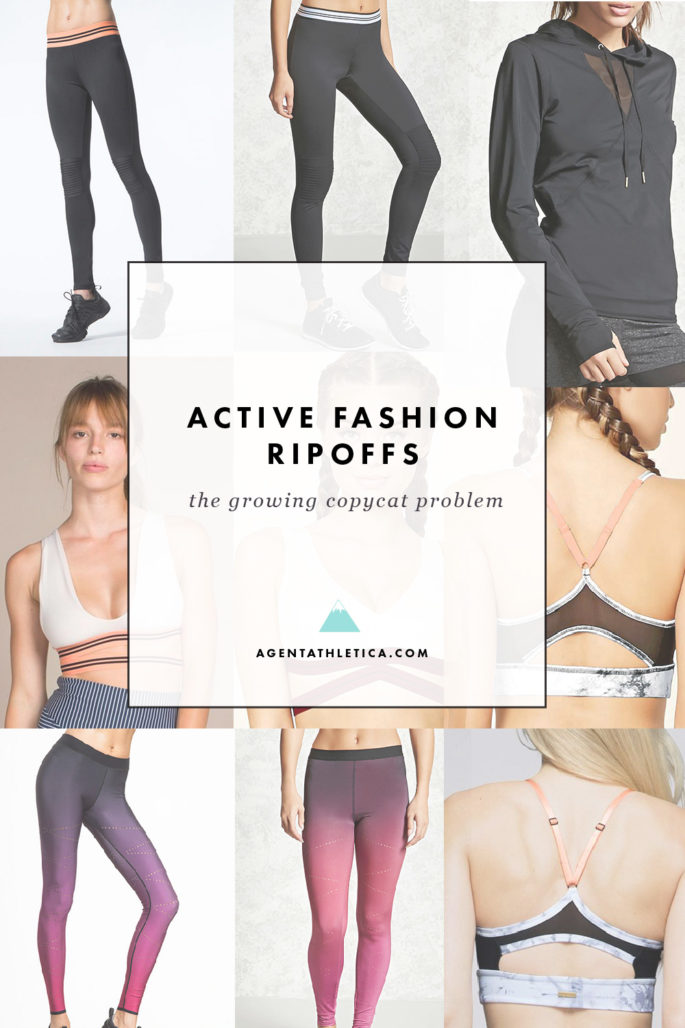 Activewear ripoffs.  We need to talk about them.

Knockoffs have been a problem in fashion for ages, but it’s only recently started to infiltrate the world of active fashion.  As the activewear market has grown by leaps and bounds, businesses are on the lookout for easy ways to cash in on this popular niche.  Producing and selling copycats of successful active designs is emerging as a less-than-honest way to make a quick buck.

One of the first times the copycat problem hit active fashion was last year when Athleta released leggings bearing an uncanny resemblance to K-Deer’s signature stripes.  Fortunately, this story had a fairly happy ending, as public outcry influenced Athleta to ultimately pull the designs.

Now, the problem is growing.  More and more copycats are popping up, and those copies are becoming even more blatant.  It’s high time we talk about it.

Before we dive in, let’s define exactly what we’re talking about.  There are two distinct ways businesses steal original fashion designs.

Fakes.  Also called: replicas.  A fake isn’t just something that looks similar to another style.  A fake is actually sold as that brand.  Fakes are what you find in sketchy tourist traps selling “Louis Vuitton.”  It doesn’t just look like LV, it actually has the logo and is sold to you as if it were LV.  Using another brand’s name and logo (read: trademarks) without authorization is a huge no-no and is one of the few cut-and-dry, legally enforceable areas of intellectual property infringement in the fashion world.

Ripoffs.  Also called: copycats or lookalikes.  This is when one company takes clear “inspiration” from another company and passes off the design as if it were their own.  A ripoff doesn’t bear any of the original brand’s logos or name anywhere.  For example, Nasty Gal made the embarrassing mistake of claiming Taylor Swift wore their jumpsuit to an awards show, when it was actually an original design by Balmain, from whom Nasty Gal copied the design.  It’s important to note that if a company simply steals a design and slaps their own name on it, it is not a “fake.”  The two terms aren’t interchangeable since they represent two very different offenses.

For the purposes of this post, I’ll be focusing on ripoffs.

Side note: the term “knockoff” could apply to either of these.

Ripoffs: where is the line?

While there is no ambiguity in one business stealing the trademarks of another, things get murky when it comes to stolen fashion designs.  On a legal level, fashion design IP is notoriously tricky.  Fashion design patents are somewhere between difficult to obtain and impossible to enforce.  On an individual level, where each person draws the line for the ethics of creating and consuming “inspired” designs can vary wildly.  My own views have evolved over the years, and I’ll be the first to admit there’s a lot of grey area.

Wherever possible, I try to give the design in question the benefit of the doubt.  I don’t want to immediately accuse a company of copying when it’s possible it was an honest coincidence.  That said, there are a few things that throw up some serious red flags.  Here is my personal framework for evaluating the ethical dubiousness of a ripoff.

This first point involves evaluating two similar questions: how complicated is the design and how many details do the two designs share?

If the design is a very simple legging with a black and white striped pattern, of course two different people could come up with that on their own.  But as the design gets more complicated with more and more details, the odds of two people coming up with a nearly identical final product shrink dramatically.

Looking at the original vs the suspected copycat, what are some unique elements of the original design and how many are carried over to the copycat?  Did they use similar color motifs?  A similar pattern?  Similar seam placement?  Similar straps, cut-outs, and design details?  Are there details they don’t share?  The more of these similarities I see, the more I suspect foul play.

If you’re browsing a website and notice that one design reminds you of another, look for others.  I frequently find that the copycat has swiped more than one design either from the same brand or multiple brands.  When you start seeing product after product that appear to be copied designs, it’s harder and harder to give them the benefit of the doubt.

This one is pretty simple: whose design came first?  The fashion cycle typically takes around 1 year from ideation to products hitting the shelves, but some companies (particularly fast fashion brands) have been able to shorten that cycle to more like 3-6 months.  If two similar designs come out around the same time, you can probably chalk it up to a similar interpretation of current trends.  But if one comes several months after the other, I’ll raise an eyebrow.

Once you’ve evaluated the first three points, you’ve probably got a pretty good idea of whether the style in question is a copy.  From there, I also consider two additional factors when weighing the situation.

If Target makes a $25 bag that’s an imitation of a $15,000 Hermes bag, how much does it really hurt Hermes?  I would contend not a lot.  No customer with a Hermes-level budget is going to seriously consider a Target bag as a viable substitute.  While that wouldn’t excuse Target’s designers from their sloppy ethics, the harm that comes from the mimicked design is arguably quite small.

That said, that kind of price difference is rarely found in the activewear world, since there aren’t exactly $3,000 leggings floating around out there.

That being said, I want to be very clear that the price of the original being high in no way provides ethical justification for a ripoff.  Yes, fast fashion has proven that there’s a huge market for taking current trends and translating them into something cheap and accessible.  But there’s a difference between riffing on the same trend and stealing an entire design, right down to the details.  Likewise, just because not everyone can afford a product doesn’t somehow entitle another company to that intellectual property.  A brand pricing their leggings at $150 is not “asking for it.”  Plenty of low-budget brands have managed to come up with non-stolen designs and provide people of all budgets with functional, stylish activewear.  Forever 21 (or others) offering cheaper versions of original designs doesn’t exactly make them some sort of fashion Robin Hood.

The large business can easily win against the small business in two ways.  First, the large one has more resources to squash any legal complaints–if the small business can even afford legal action at all.  Second, the indie brand has limited reach and limited influence, meaning that precious few people would even realize the design was copied.

While two companies being similar in size and power doesn’t excuse a copycat, in my opinion a power imbalance makes a bad situation even more infuriating.

Note: copycat products and sites will not be linked so as not to encourage traffic and purchases. 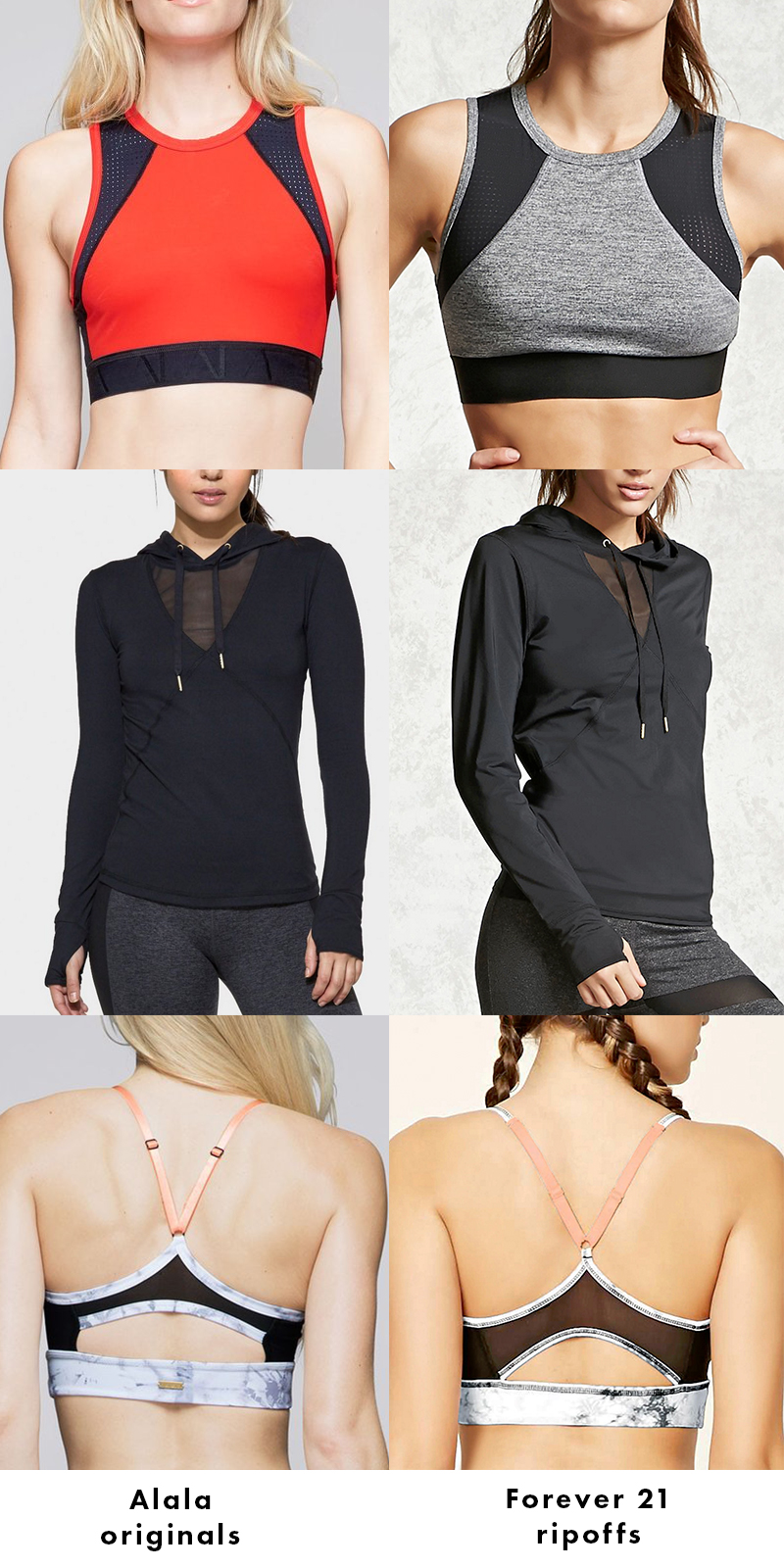 F21’s Alala copycats check just about every box in the copycat book.  They took several designs from Alala’s summer collection last year, making it hard to call the similarities a coincidence.  The copycat of the cut bra takes just about every detail, from the neutral print, to the mesh back, right down to the adjustable coral straps.  Not subtle. 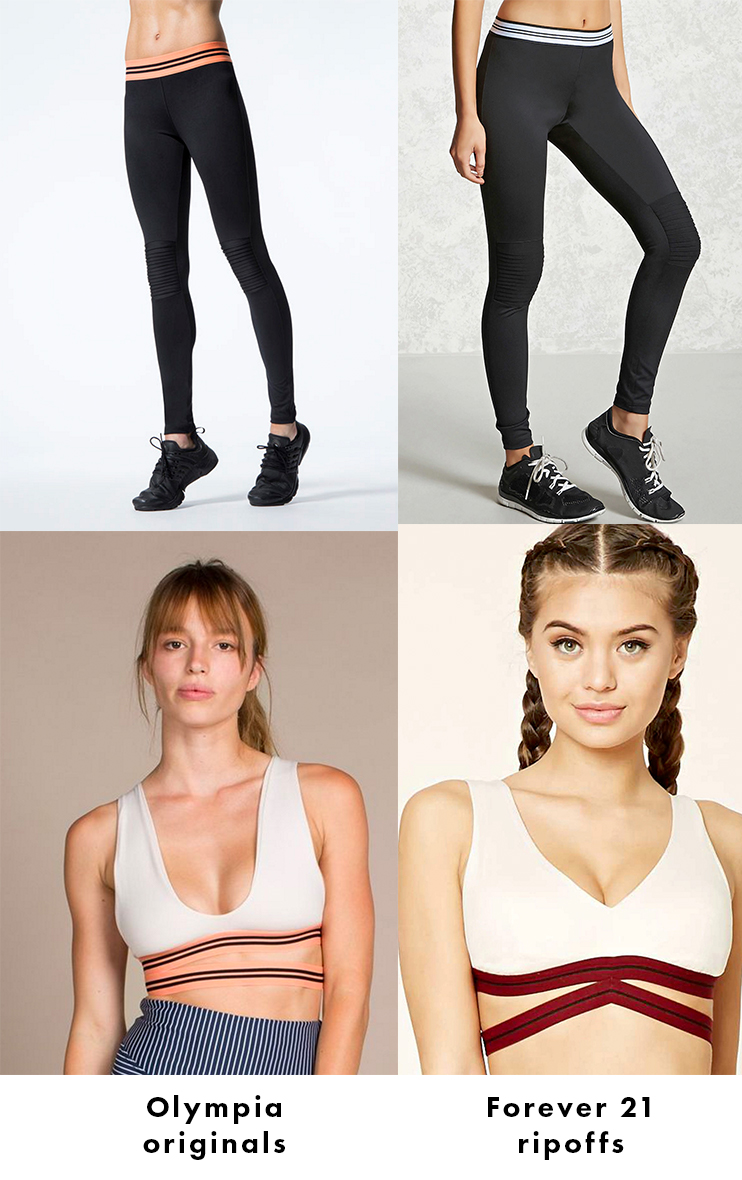 Another not-so-subtle copy comes from Olympia, where they’ve mimicked Olympia’s signature contrast elastic details.  Olympia’s moto leggings have been one of their most popular styles, so of course F21 went after that with the textured knee detail. 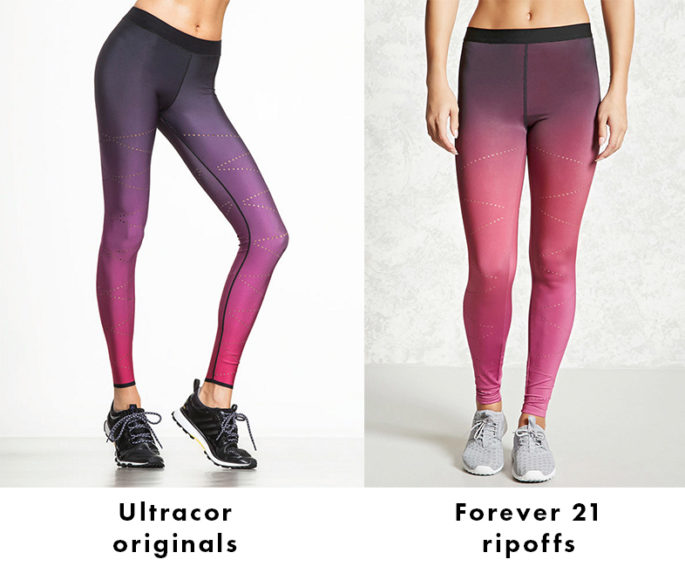 The number of details they’ve taken from Ultracor’s original make these a copycat slam dunk.  They used the purple and pink ombre, Ultracor’s signature plain elastic waist, the high rise, the dark center seam, and of course the zig zag perforated details.

And of course, F21 couldn’t help but add lululemon to their roster, too.  All three of these styles are dead ringers for lululemon’s originals in every way.  Although lululemon is not a small business like the other brands I’ve highlighted on this list, that doesn’t make it ethical for F21 to shamelessly lift their designs over and over again.

Unfortunately, what I picked out for this list is just a few examples of the copies from F21 and is by no means exhaustive.  Taking a gander through their activewear section means rooting through an almost overwhelming number of blatant or suspicious-looking copies from these brands and more.  Forever 21 has come under fire for copying designs on numerous occasions and seems to be utterly unapologetic for their practices.  But the sheer quantity of stolen designs as well as the repeated small business element in their activewear section brings them to a new low.

Aritiza’s in-house label “The Constant” matched not just one piece but a whole coordinating set from Outdoor Voices.  They’ve copied the high neck of the slashback crop, the back cutout, and the colorblocking.  They borrowed the exact same dark-to-light heathered colorblocking of the leggings, right down to the curved back seam detail.  Even the photography style matches OV’s aesthetic.  The only tweaks were the slightly flattened line above the knee leggings versus OV’s diagonal line on the leggings, and the slightly altered colorblocking on the crop top.

Kudos to Catherine @heelsandjuice for spotting this one last week.

Werkshop’s claim to fame is the ornate, original artwork on their printed leggings.  Their founder spends a ton of time designing and perfecting her artwork for each pair of leggings, and it shows.  Lotus Leggings lifted nearly indistinguishable patterns from some of Werkshop’s most popular designs.

Lotus has been ruthless in their copying, including using some of Werkshop’s photography for advertisements as well as removing comments and blocking users who point out the stolen artwork.  They also have numerous complaints alleging that they’ve taken people’s money without delivering goods, so one can only hope that it’s only a matter of time before they’re forced to close their doors.

For thoughts from a small business’ perspective, Werkshop wrote an article about this here that’s worth reading.

What can we do about it?

If copycats get you all fired up, there are a few things we consumers can do to combat this issue.

First, don’t be afraid to speak up.  For example, use social media to bring attention to the problem.  Use your own social media platform to raise awareness of ripoffs or leave comments on the copycat’s accounts.  Both can help raise visibility for the original designer’s work.  The Athleta/K-Deer debacle last year was a good example of this.  Athleta’s social media was swarmed by unhappy customers bringing attention to the issue, which I’m sure contributed to the ultimate removal of the designs in question.

You can also contact the brands directly, point out the copied designs, and politely ask them to be removed.

And of course, vote with your dollars.  If you believe something is a copy and it rubs you the wrong way, don’t buy it.  Instead, funnel your money toward brands you feel are innovative, original, and valuable so that they can keep doing that work.

As for me, I highly value the integrity and creativity of the talented people in the active fashion world.  In light of that, I will continue to use my dollars and my voice on this blog to support and promote innovative design and the hard work of small, independent businesses.