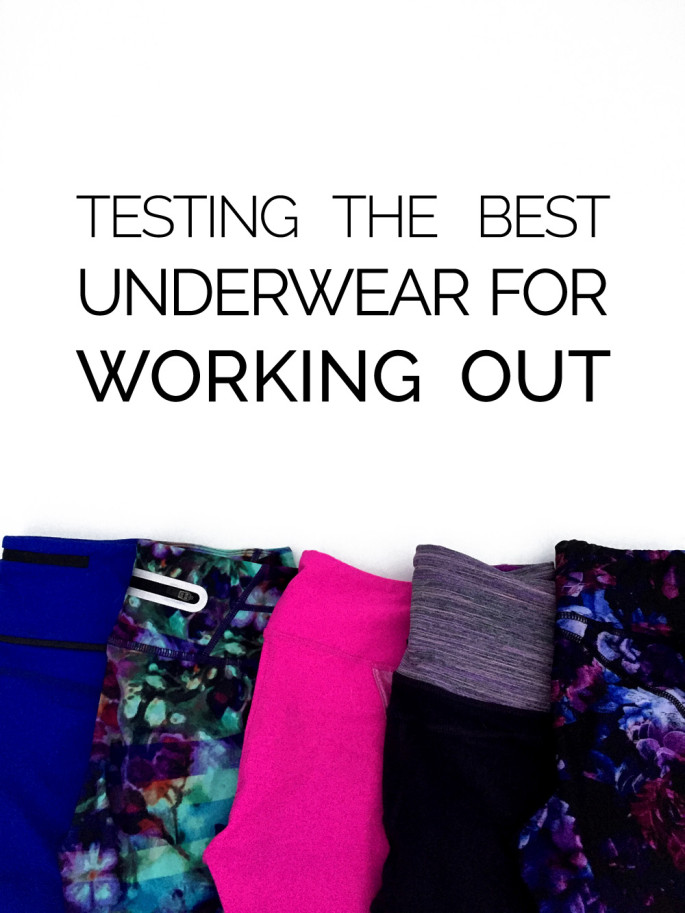 Let’s be honest, bad undergarments can ruin your day.  No one has time for uncomfortable, shifting underwear while you’re just trying to focus on your barre routine, or your run, or your squat form.

Last year, I wrote a post recapping a few styles of underoos that do and don’t work well for fitness endeavors, plus a few general observations.  You can read that here.  That said, several of the styles I discussed in the original post have been discontinued, and I wanted to follow up on the topic with a few more options and thoughts.  So, here we are for the workout underwear rundown round 2.

In case you haven’t already found out through personal experience, you don’t need workout-specific underwear.  Some of the best styles I’ve found are great both for workouts and everyday life.  That said, I recommend avoiding cotton and sticking with synthetic fabrics to avoid that gross, sweaty feeling.  Both full coverage and minimal coverage work just fine; coverage level totally comes down to personal preference.

To get into the specifics, here’s a few styles I’ve tested out lately and how well they held up.

Although these are advertised as a boyshort, in my opinion they fit like a brief.  The rise on these is very high compared to most other styles.  They hit a little more than an inch below my belly button, so as you can imagine, I can only wear them under high-rise bottoms.  They stick out under anything mid-rise, and of course low rise as well.

They’re made of a very slippery material which is nice and lightweight.  That said, because the rise is so high, I’ve found that the waistband of the leggings I’m wearing can struggle to find a grip, meaning that these can cause my leggings to shift and slip. (Slippage that, I should note, does not ever happen in any other circumstance.)

The last thing that makes these unique is the bonded seams at the top of the waistband and leg openings.  The advantage of the bonded seams is that it prevents any rolling at all.  The downside is that it does add a bit of bulk.  These seams felt tight and cut in slightly when I first wore them, but I have not had that problem since then.

Overall, these were definitely not my favorite.  The high rise drives me crazy.  I also don’t care for the bonded seams at at the waistband and leg openings, because I feel they add bulk.  Although they seem to be good quality, they don’t work for me personally.  If you’re looking for high-rise, full coverage and don’t mind bonded seams, these might work for you.

This style splits the difference between a thong and a boyshort.  Depending on your body shape, expect somewhere between 1/2 to 3/4 coverage, as opposed to the more full coverage of a typical boyshort.  As a quick sizing note, in my opinion, the S/M fits like a small.  The material is quite stretchy, so it would probably stretch nicely.  That said, if you’re between sizes, you may be more comfortable in the larger size.

They’re made of a lightweight but sturdy microfiber (nylon/spandex) material.  Unlike some of the flimsy styles I’ve tried before that shifted all over (like lululemon’s light as air line, ugh), the material stays in place nicely while still being light enough not to notice it’s there.  I never notice these when I’m working out, which is exactly what you want in a pair of good workout underthings.

In my last workout underwear post, I got a lot of comments recommending Commando, and they’re not wrong.  These were an excellent purchase.

These are made of the same material as the Commando girlshorts above, but in a lower-coverage style. (If you want even lower coverage, they have a pared-down version of this style as well.) Unlike most of the other styles on this list, the waistband on these (and the girlshorts above) angle downward just slightly in the front.  I don’t find this makes a significant difference in the function, just something to note.

This style is another great one from Commando.  I love them.  Unlike a lot of the other styles on this list, Commando offers a handful of colors and prints, so if you’re not into an endless sea of black and nude, you can switch things up. (They also offer multiple shades of “nude” for women of varying skin tones, which is a rarity!)

I tried Zobha’s boyshort style in my last post and really, really like them, so I figured I’d try their thong version as well.  Sure enough, these were a winner, too.  They’re lightweight but not flimsy, they fit comfortably, and they’ve held up very well.  They’re simple, but very effective.

The Zobha thong is nearly indistinguishable from the Commando thong mentioned above, but Zobha’s are cheaper at only $15 each instead of $22.  Also, Zobha frequently runs sales where you can score up to 40% off, so if you time it right, you can stock your drawer for a very good price.

Although they’re supposed to be lightweight and breathable, the material on these felt the heaviest out of the bunch.  These are also the only ones that have a seam running across either side of the front of the hip.  They felt like they ran slightly big, so the fit was not great on me.

Overall, these were pretty underwhelming.  Even though they’re advertised as workout bottoms, they didn’t perform any better than others.  If you want a similar material, but a better product, the Under Armour sheer hipster just below is a better bet.

I tried this in 2 variations: the sheer version and the regular pure stretch version.  The two are made of very different materials.  The sheer is a perforated, mesh-like material, while the regular version is a solid, seamless material that’s very similar to several others on this list (Zobha, Hanky Panky, Commando).  The sheer version is like a lighter, slightly nicer version of the Adidas above.  Note that the sheer one does have seams at the leg openings and waistband, so if you don’t care for seams, steer clear.

Since both of these are billed as hipsters, they have a higher cut leg opening.  Although it’s designed to be full coverage, the leg opening angles sharply, rather than the relatively shallow angle of boyshorts.  Take note that these run a bit big in my opinion.  I wore a size smaller in these compared to all the others on this list and the fit is comparable.

Overall, I’d rate both of UA’s hipsters as decent, but not great.  They work just fine, but I prefer others in my drawer.

Hanky Panky’s bare line is cut just like their classic lace styles, but are made of a solid material instead.  The material is similar to the other seamless options on this list (Commando, Zobha, UA).  They’re lightweight and hold up well to a workout without shifting or feeling heavy.

While the Commando and Zobha styles are made out of one continuous piece of fabric, Hanky Panky’s has multiple seams.  The crotch panel is separate, and the waistband is made of two panels.  That means there’s a seam on either side of the waistband, plus one at the front and back where the waistband connects with the crotch panel.  The seams aren’t uncomfortable, but if you’re looking for something as smooth as possible, go with one of the other options on this list.  Although this might be a strange thing to point out, I noticed that the crotch panel on these is wider than most others at both the front and back.

While I really like these and they’re quite comfortable, most of the time I prefer the more truly seamless styles under leggings.

Out of all the styles I’ve tried so far, I would most highly recommend Commando and Zobha.  Both the high and low coverage options I’ve tried from these brands have been rock solid.