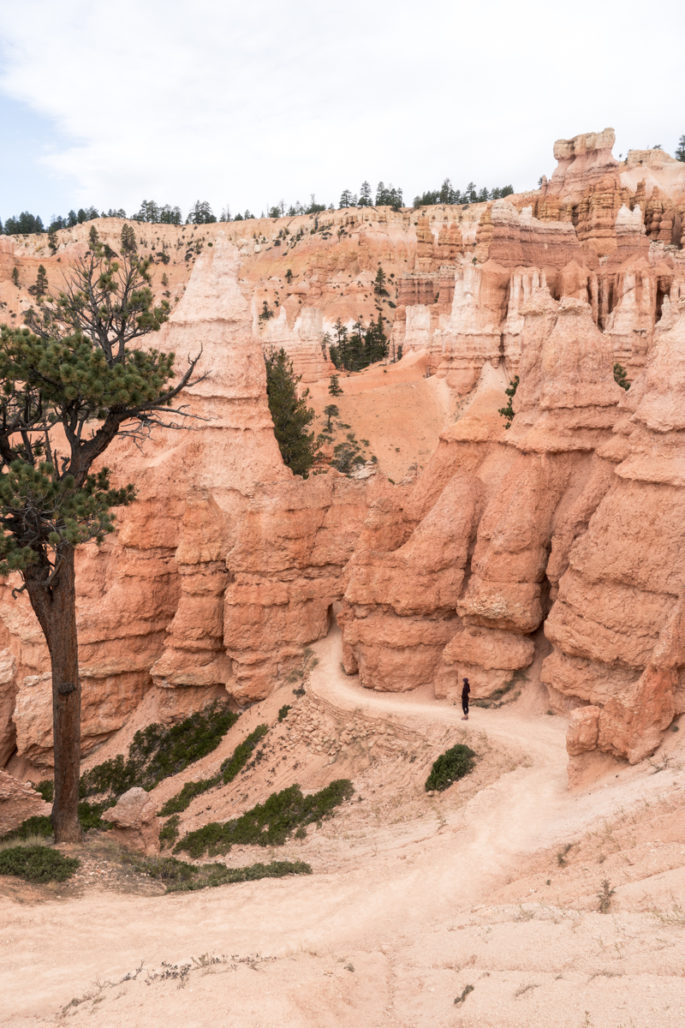 Bryce Canyon National Park is a small park in southern Utah, not too far from the super-popular Zion National Park.  I’ve taken a couple trips to Zion, but finally made the extra drive out to Bryce this past fall.  Friends, Bryce does not disappoint! 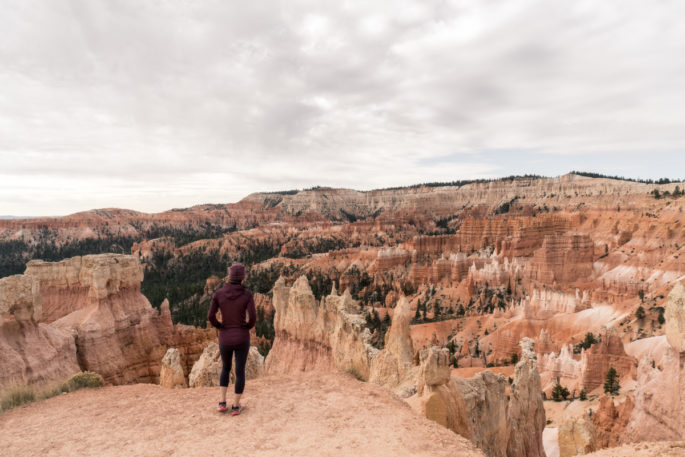 The elevation at the rim of Bryce Canyon starts just under 8,000 ft and goes up to over 9,000 ft in the south side of the park.  Compare this to the elevation at the base of nearby Zion Canyon, which is a bit over 4,000 ft.  Elevations above 5,000 ft get much, much chillier with every extra thousand feet you ascend.  This means that you can expect Bryce to be about 15-20 degrees colder than Zion or other surrounding areas.  High elevation also means that temps in the early morning and later at night can get especially chilly.  Check the forecast and layer accordingly.

Side note: if you’re paying a visit to nearby Cedar Breaks National Monument, it’s perched up at an even colder 10,000 ft! 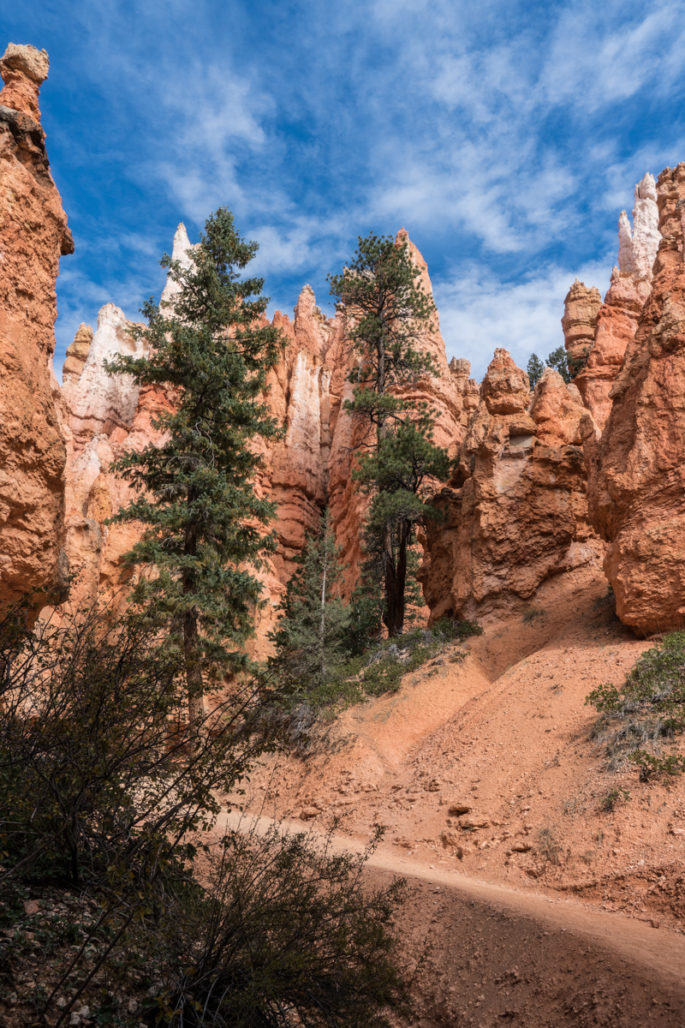 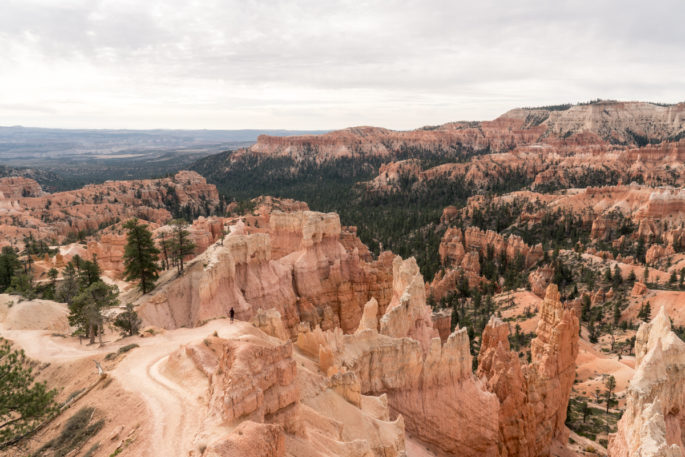 The high elevation at Bryce doesn’t just mean chilly weather, it also means less oxygen due to the lower air pressure.  While you might not feel the difference in your breathing when you’re still, as soon as you start moving around, you’re very likely to get winded much faster than you’re used to.  Slow your pace when hiking, especially uphill!  If you’re used to sea level air, it can be easy to push it too far even to the point of altitude sickness.  Don’t let your ego get in the way.

One more thing about thin air: the thinner atmosphere means sunburn happens much, much faster.  In full sun, you can burn quickly even in winter.  Lather up or cover up! 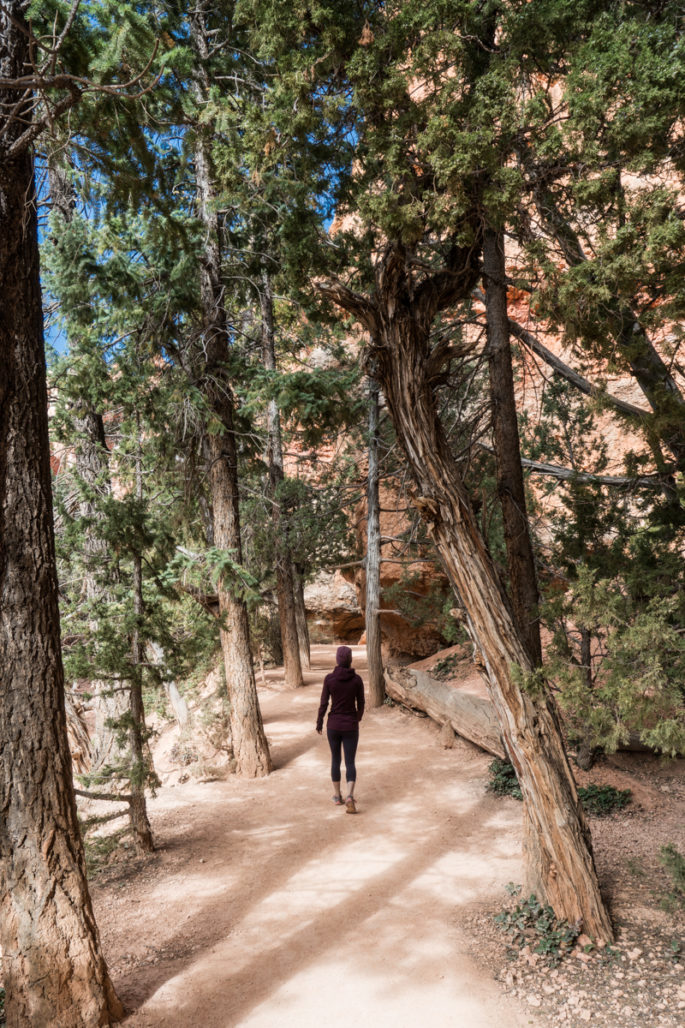 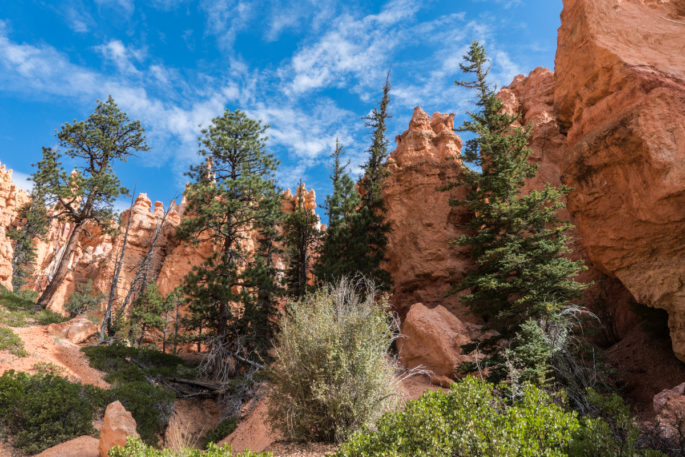 Bryce isn’t just a sandy, deserty landscape.  I was expecting it to be a bit more desolate, but there’s actually quite a lot of plant life.  They’re sparse around the hoodoos, but plentiful both on the rim and just below the rim as you get past the thickest areas of the hoodoos.  It creates a beautiful contrast of the sandy and colorful high desert with the rich greens of plant life. 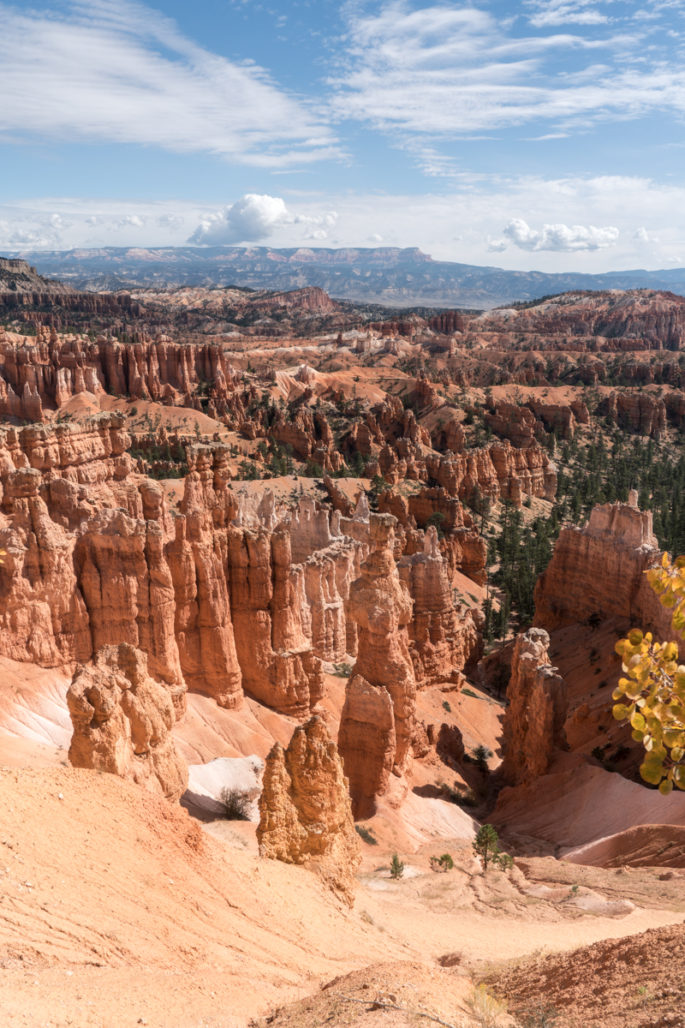 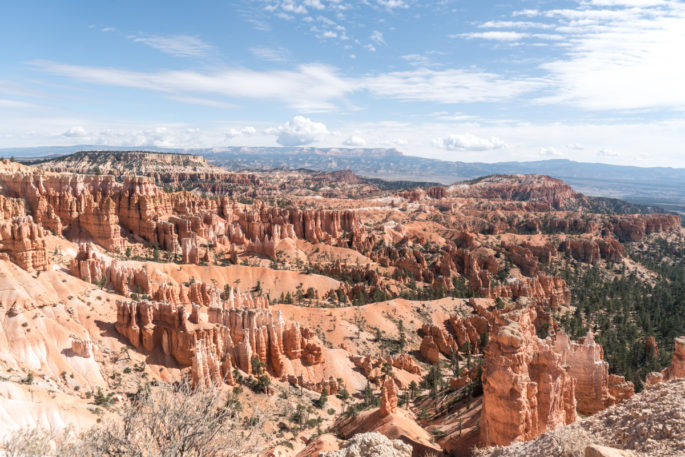 Bryce is a smaller park, so if you’re short on time, you can see several high points in just a day.  But if you’d like to stay a bit longer, there are enough trails and sights to fill up a few more days.  To switch things up, one popular activity is to take a horseback ride into the canyon via horse-specific trails.

Bryce amphitheater is the main area where most of the hiking trails and iconic sights reside.  The rim in this area spans just a few miles.  The park only has one main road that extends the length of the park, with trailheads and viewpoints stationed along it. 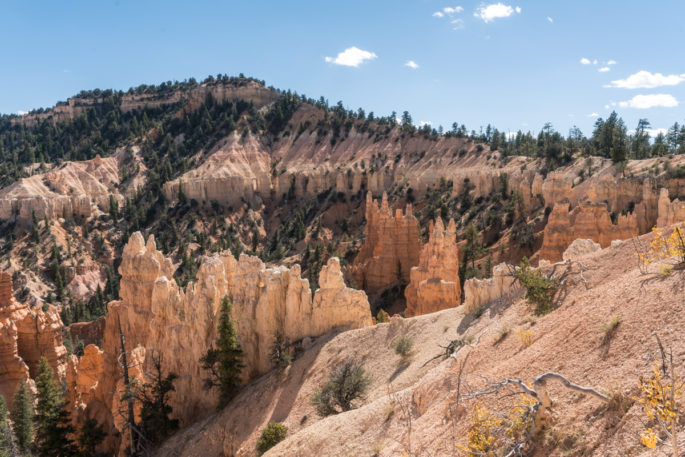 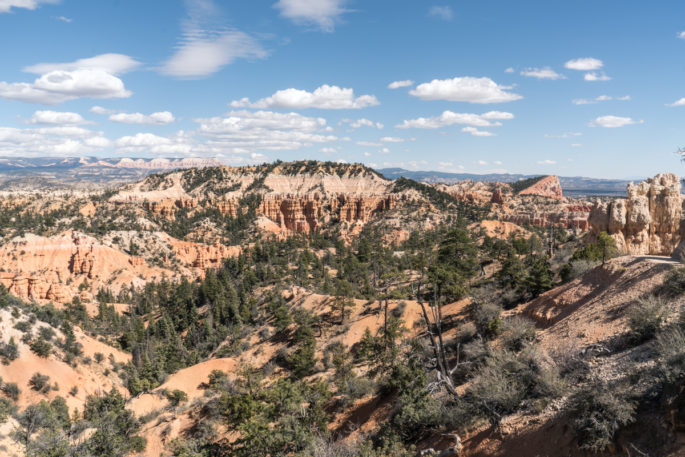 To the north, closer to the entrance, Fairyland is accessible by a small off-shoot road.  There’s a nice trail that leads deep into the backcountry or provides a nice out-and-back day hike with plenty of beautiful views (pictured above near the trailhead).

To the west, you can continue driving south on the main park road to numerous more view points, camp sites, and trails.  We didn’t get further south than Bryce Point on this trip since we were short on time.

One advantage of Bryce being a smaller park is that it is much less crowded compared to more famed parks like nearby Zion.  Despite that, I think the photos prove that is absolutely worth your while. 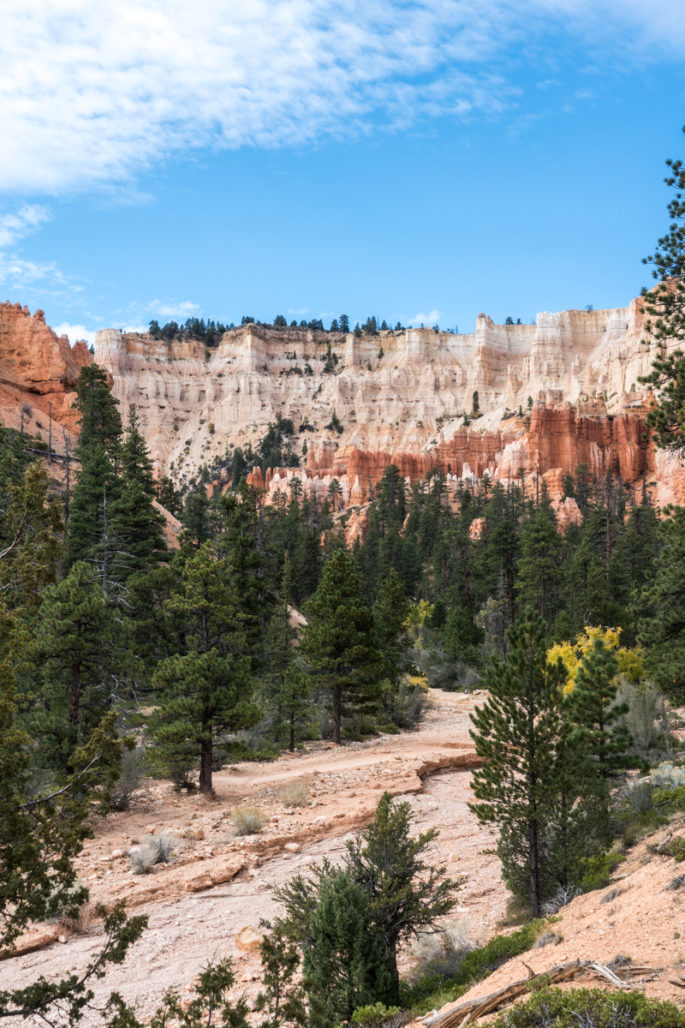 The morning started off chilly and cloudy.  The dense cloud cover provided some beautiful contrast and moodiness in the morning light.  Beyond the hoodoos, the landscape fades into the tiered landscape that is the hallmark of the Colorado Plateau.

After a couple hours, the clouds broke.  The feel and the views of the park totally changed as the light transitioned.  I loved getting to see two moods of the park in one day.  The contrast of the intensely blue sky with the orange geological features is at least as striking in real life as it is in photos! 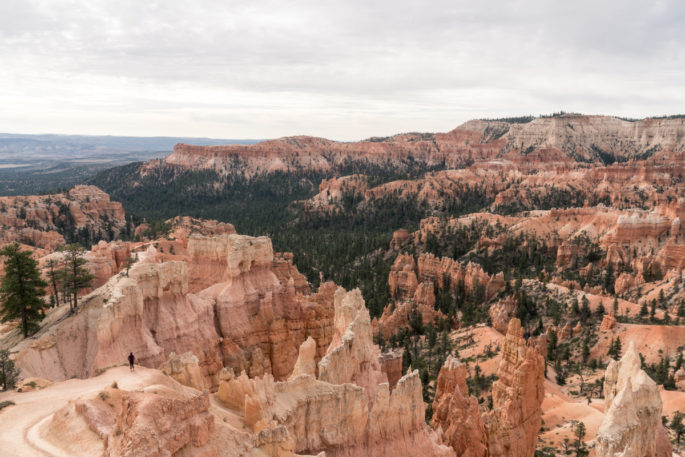 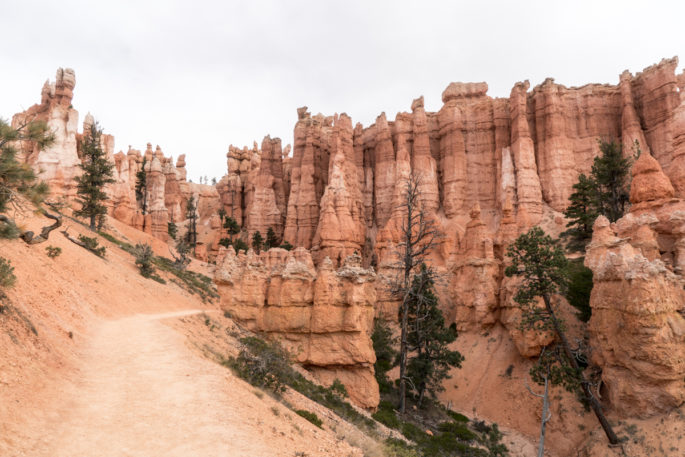 We elected to take a stroll starting from Sunrise Point down Queens Garden Trail.  There’s a viewpoint at Sunrise Point that overlooks the trail.  It’s an amazing spot to set up a photo!  It really gives the whole place a sense of scale.  The hoodoos of the amphitheater look so much more dramatic in real life. 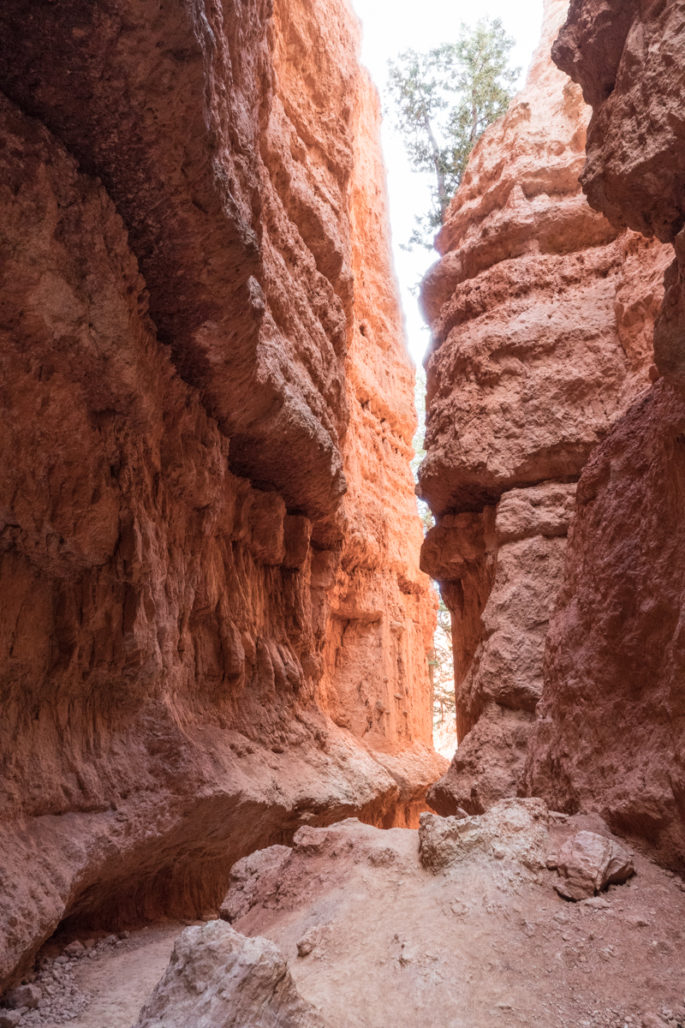 Once you reach the end of Queens Garden, the trail meets up with Navajo Loop.  You can choose to go toward Two Bridges or Wall Street.  Both will lead you to the same place, just with different views along the way.  We chose Wall Street, which seems to be the more popular of the two.  When we came up out of the canyon this way, the trail terminated with incredibly dramatic, towering rocks that frame steep switchbacks up to the canyon rim.

Together, Queens Garden connecting to Navajo Loop is only a bit under 3 miles with some mild elevation change concentrated at the beginning and end of the hike.  Since we had family with us, the more laid back trail was best for us.  It’s one of the most popular routes in the park since it’s very doable for casual hikers and families. 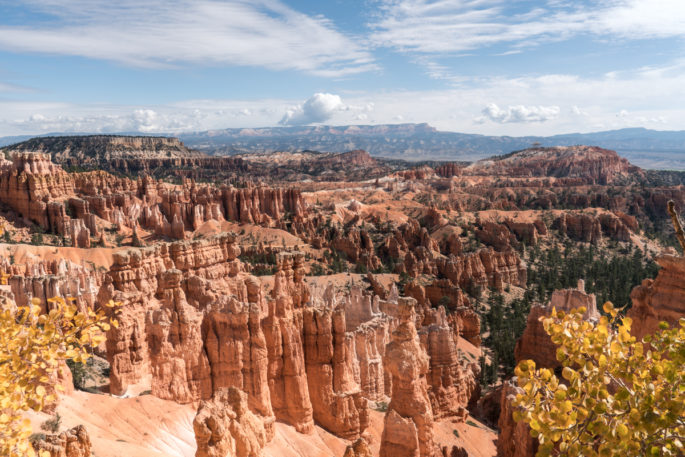 We popped out at Sunset Point, snapped a few pics, then walked along the Rim Trail to Inspiration Point. 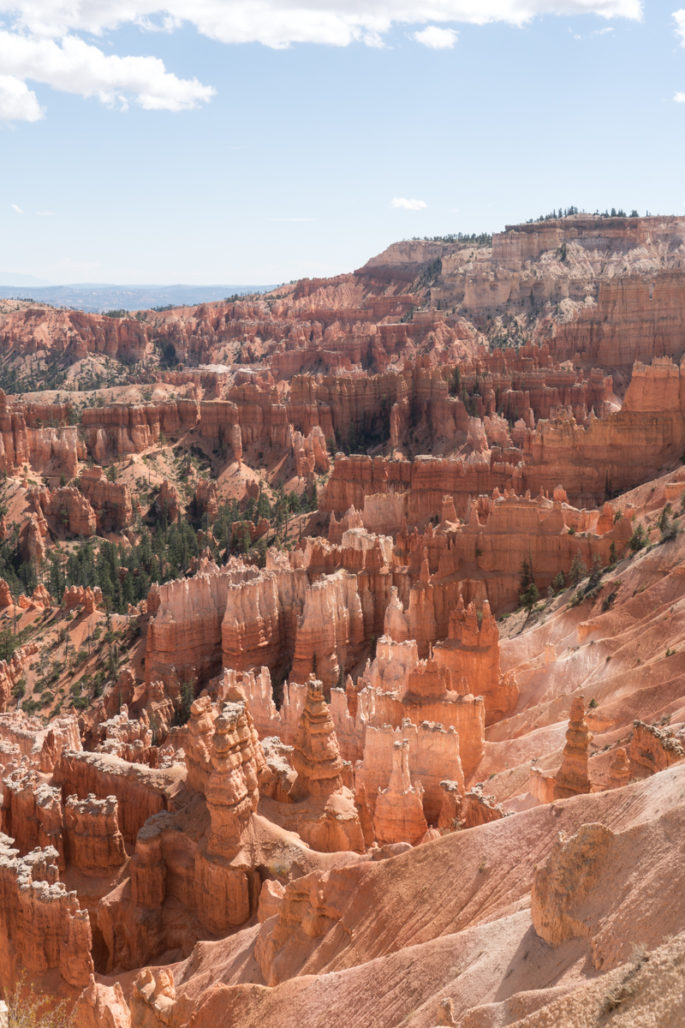 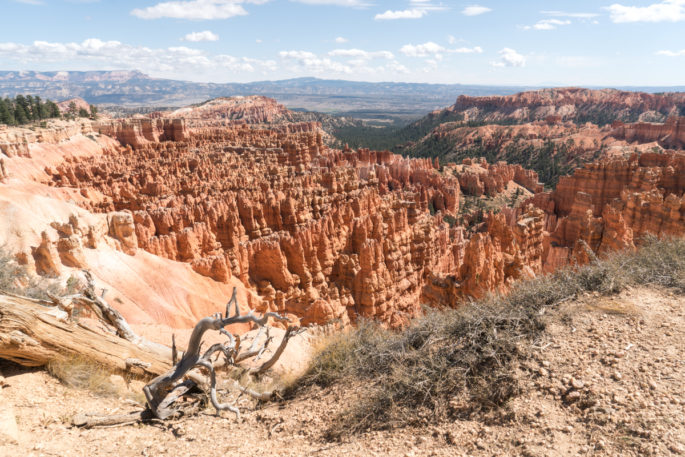 From Inspiration Point, our plan was to walk all the way to Bryce Point, but don’t be misled.  Just because you’re walking along the rim doesn’t mean it’s flat!!  This southbound portion of the rim trail is actually a bit steep.  We had already walked quite a bit and another 2 miles to go before Bryce Point, so we decided to hop on the bus. 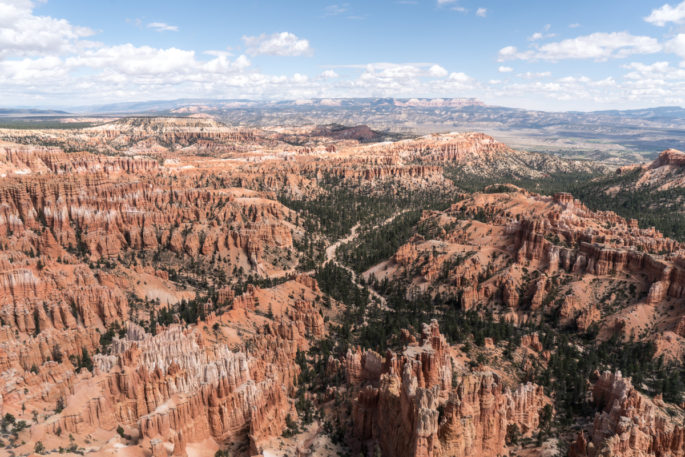 Bryce Point provides sweeping views the amphitheater thanks to its higher vantage point versus the other vistas to the north.  A couple of trails also start from here, including Peek-A-Boo Loop, a more strenuous 5.5-mile loop.  It rings in at about 1,500 ft (remember, you’re in a canyon so the hard part is at the end!), making it more challenging compared to the other hikes from the rim. 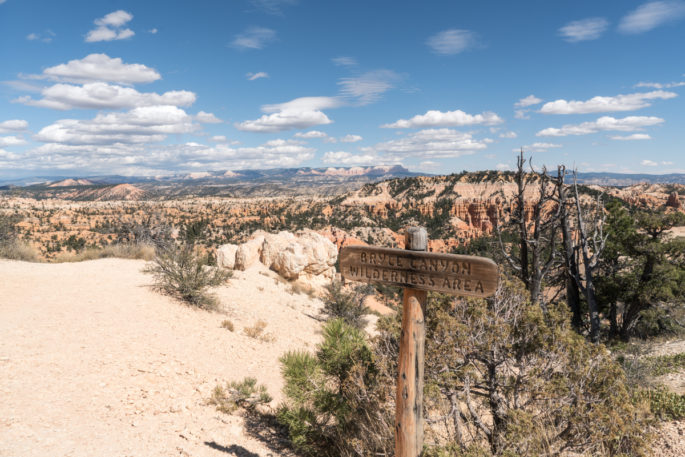 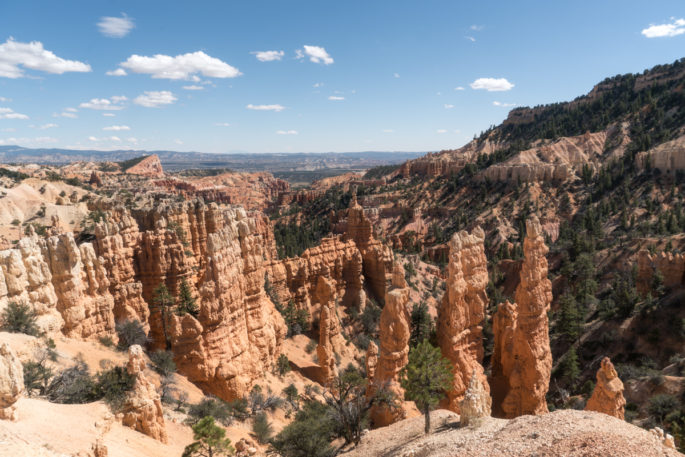 After Bryce Point, we took the bus back to our car and drove to Fairyland on our way to the park exit.  We walked for just a few minutes along the trail before moving along. 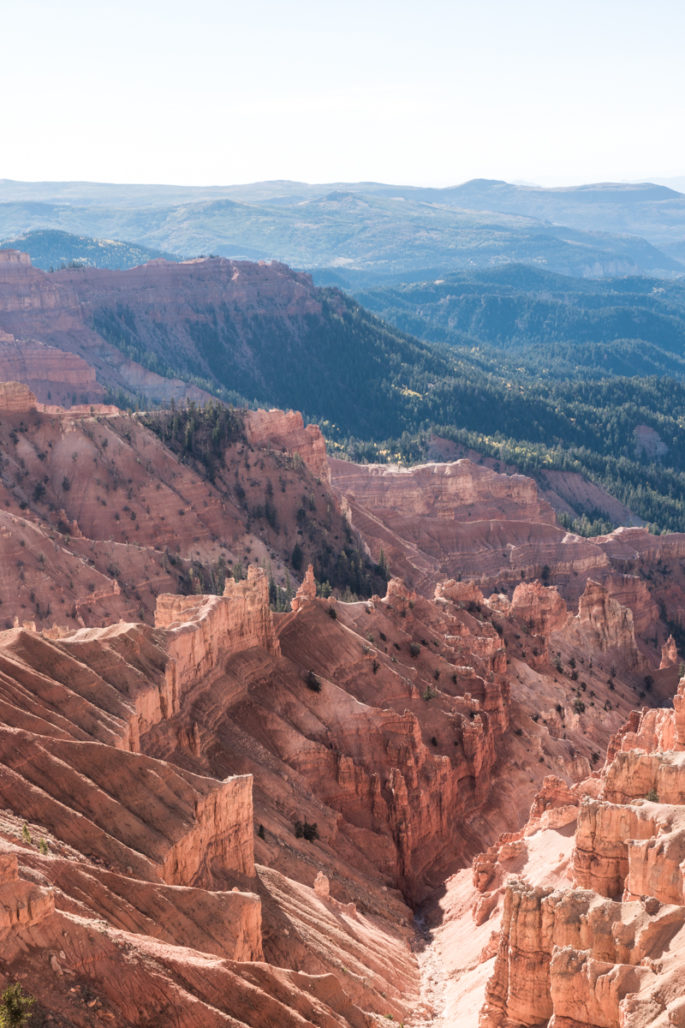 After Fairyland, we made a quick side trip up the hill to Cedar Breaks (pictured above).  We only stayed at Cedar Breaks for a little while because, man, it was cold!  The drive up through aspen forests and alongside lakes is so lovely, which made the extra driving not seem like a chore. 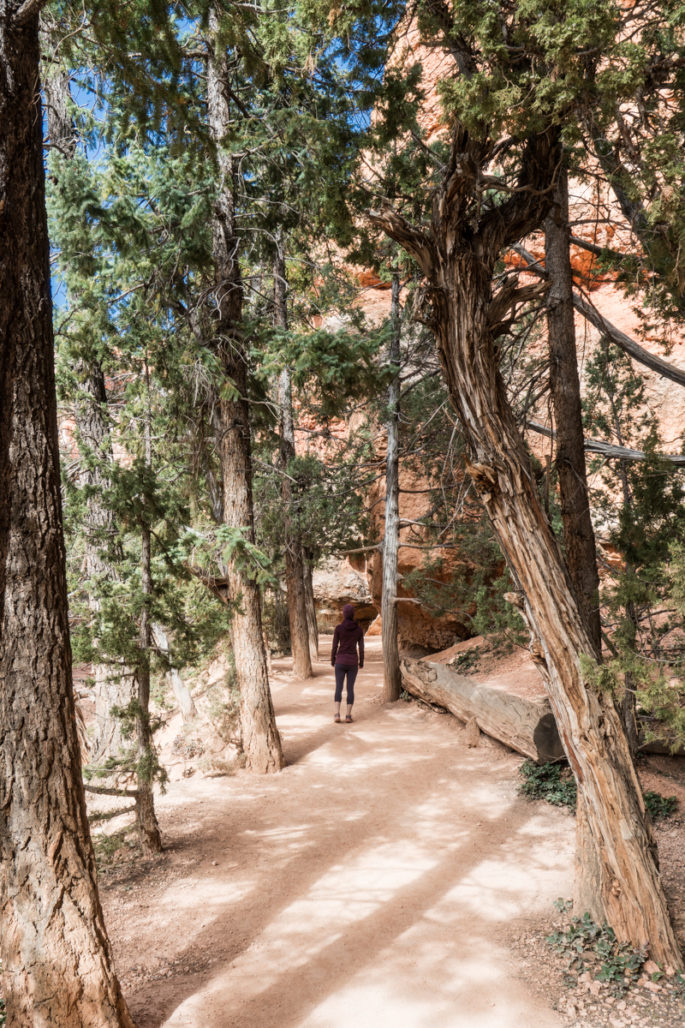 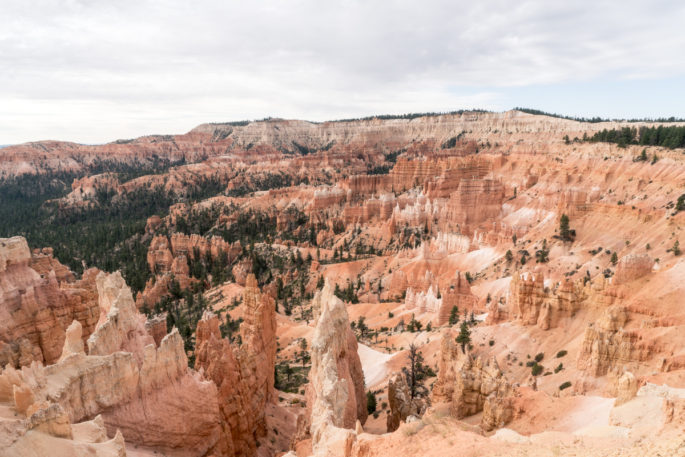 If you’re hitting Zion and Bryce in the same trip, you can switch hotels, or you can split the difference and stay in the middle.  We opted for the latter and stayed at an inexpensive hotel at Mt Carmel Junction.  The drive up to Bryce was actually quite beautiful, much moreso than I expected.  It helped that it was fall, so there were some patches of rich color to enjoy.  Note that if you stay in Bryce (the town), it’s very small with not much to do.  In contrast, Springdale is larger with more restaurants, a movie theater, a grocery store, etc.  There was nothing to do at all in Mt Carmel Junction, which has a couple of restaurants nearby, unless you’re willing to drive about 30-40 minutes through Zion to pop out the other side in Springdale.  Plan accordingly!

Next time, I’m considering staying at The Lodge at Bryce Canyon, a historic hotel mere steps from the rim.  The location simply cannot be beat, and rates are reasonable if you can find an available room.

Lastly, do not for a minute dismiss the possibility of visiting Bryce in winter.  Snow absolutely transforms the park into something really uniquely breathtaking.  Not to mention, accommodations are considerably cheaper, at only $130/night for a room in the Lodge.  Although I’ve only seen Bryce in winter through pictures, it’s absolutely on my list!