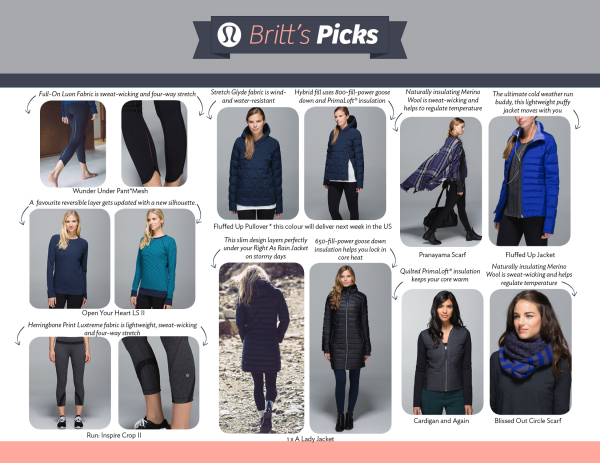 Britt’s picks is out for this week:

– The open your heart LS is back, but the fit is different from the one last year.  For one thing, the hem looks different: last year had a barely-finished hem and slight contouring, but this year’s is straight and thicker.  This year’s is a crew neck, but last year’s had a gentle scoop.  This year’s is made of the same fabric and is still reversible with stripes on one side–in fact, the one pictured looks just like last year’s surge/inkwell.  This looks like what’s in the “tops” product banner, so it’s presumably coming in purple (nightfall?) too.

– The new 1x a lady jacket is another thing from product banners: it’s a knee-length, hooded, 650-fill down coat.  If this comes in nice colors, I would love to try it, but it’ll probably be >$300.

– The giant herringbone inspire crops will hit North America after being uploaded overseas last week.  On the one hand, I love anything herringbone, but on the other hand, I tend to like the look more on cozy luon/rulu layers–not sure how I feel about it on running crops.

– I had almost completely forgotten about the cardigan and again, which has a quilted primaloft front panel and probably hit Europe like… a month ago?

– Scarves!  The pranayama scarf must be the same thing as from the product banner, but will also be coming in the plaid shown here.  No idea if the chevron will be out next week.  Really sad it’s made of merino.  There’s also a new pigment striped blissed out circle scarf, also merino.

– The fluffed up pullover will be arriving in North America.  Still think it looks just like the om and roam pullover, which I think translates very poorly to an insulated pullover–it looks so boxy.

– The pigment blue fluffed up jacket will hit North America–US did not get any fluffed up jackets last week, and Canada only got the other 2 colors.  I wish this jacket wasn’t so plain, it doesn’t seem very flattering, but at least the color’s good.

– Lastly, another new mesh version of the wunder unders, with a delicate inset of mesh running up the back and curved hems.  It looks like they’ll be coming in black and inkwell.  These look like the laser cut WUP in that they’re basically crop length, but probably are being billed as WUP for pricing purposes.