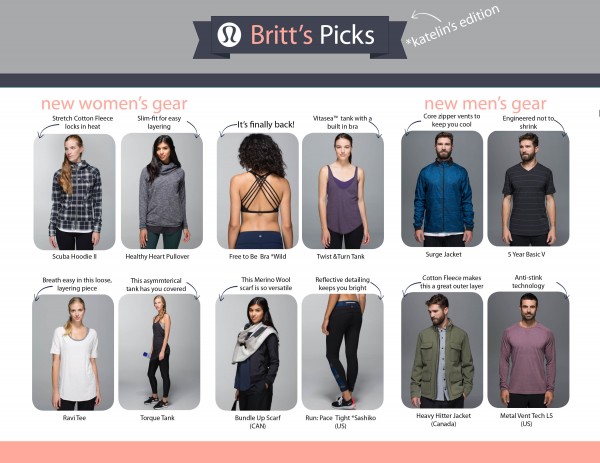 Another week of Britt’s picks, still being covered by Katelin.

As we saw in stores, the free to be wild bra is coming next week.  In the comments, Katelin spills the beans that there will be 3 colors besides black.  We’ve only seen two so far.  Maybe something with berry yum yum or flaming tomato?  Also: rumors are circulating the FTBW might become part of lulu’s core bra line instead of just the occasional color.

The healthy heart pullover is returning.  Pictured is coco pique.

The varsity plaid we saw in wunder unders will be on the scuba hoodie.

Two new tanks: the twist and turn tank and torque tank, the second of which is asymmetrical, which is interesting.

The ravi tee is coming, although we saw this uploaded overseas this past week.

The sashiko/reflective pace tights will be uploaded…these are kind of old news though.

Lastly, new bundle up scarf made of merino wool in some sort of block/check pattern.

Besides the free to be wild, kind of another snoozefest this week!  Still waiting for my berry yum wheezy check speeds…