Time for another week of Britt’s picks!  Katelin notes that there will be a new name next week, which makes sense given that Britt no longer puts these posts together.  She didn’t say what the name will be yet.

Notice also that, if this preview is any indication, the uploads for US and Canada will be pretty different.  Most of these items are exclusive to one country or the other.

Next week is the first upload of the month, which usually means a particularly high number of newer colors and patterns rolling out.  This preview seems to be right in line with that. 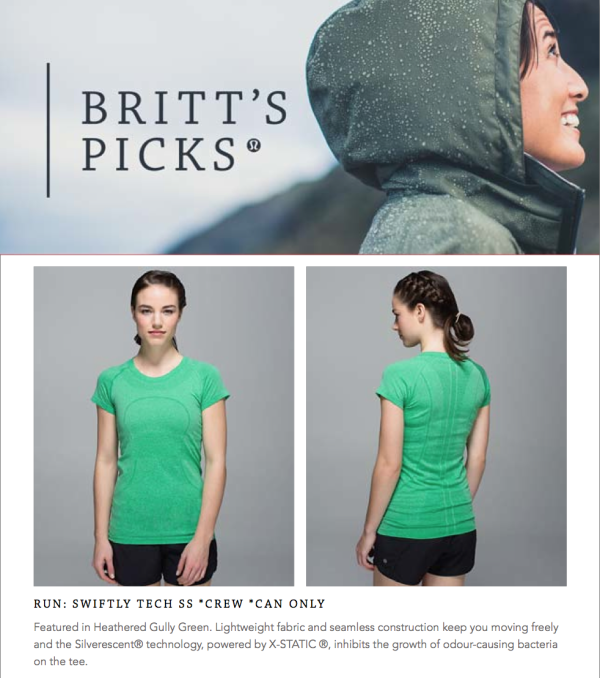 New shade of green: gully green.  This looks like a really nice kelly green, and there aren’t a lot of kelly green shades in lulu’s history.

Note also the fatigue fo drizzle in the header will be uploaded in the US this week. 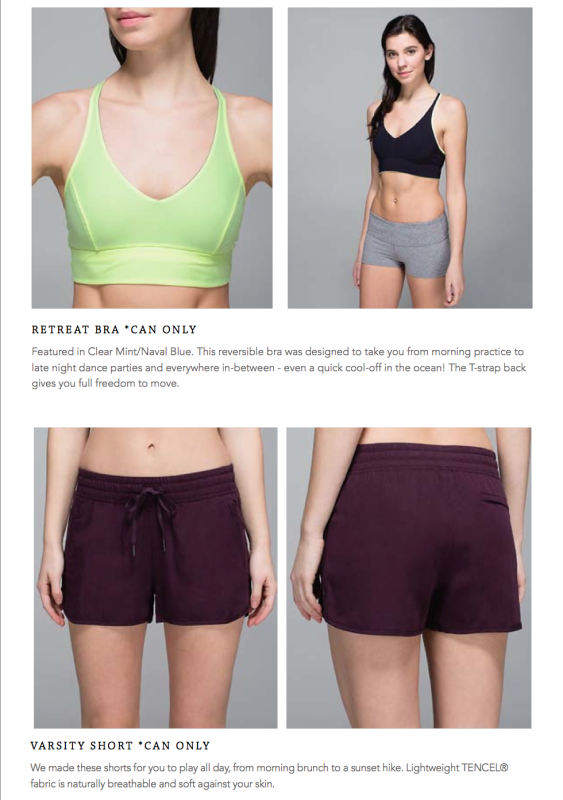 New bra: the retreat bra.  Apparently, it’s reversible, but sadly that probably means it does not have slots for cups.  The pictures shown are of different sides of the same bra–you can see the naval blue showing through on the clear mint side.  The description says it will have a T back, perhaps like a sturdier version of the arise bra?  The wide band looks like it would help with support, and the coverage might be enough for some C/D-cupped ladies to not feel too naked.

The varsity shorts are also returning.  These came out a few months ago and languished on markdown for quite a while.  The black cherry (I assume) is much cuter than the greys and blacks released last time, though.  They also don’t look as pancake-butt-ish as last time, but that could just be the model and/or the color.  Katelin mentioned in a previous Britt’s picks that black cherry would have a moment in March, so perhaps this is representative of that. 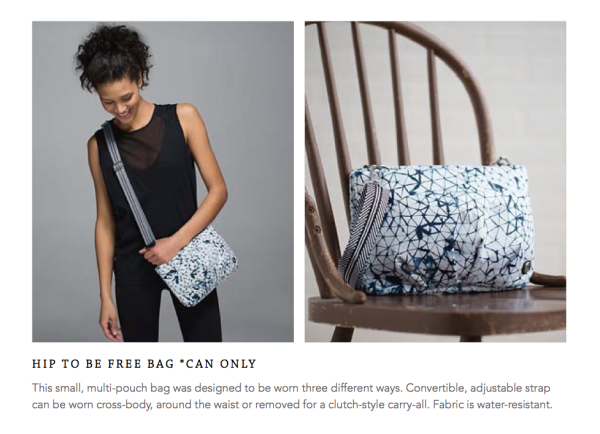 The hip to be free bag was spotted in Australia a little while ago, but not in this color.  This print is called star crushed silver fox deep navy, and I think it’s a really nice print.  As far as crossbody bags, though, I think the festival bag is a little cuter design than this one. 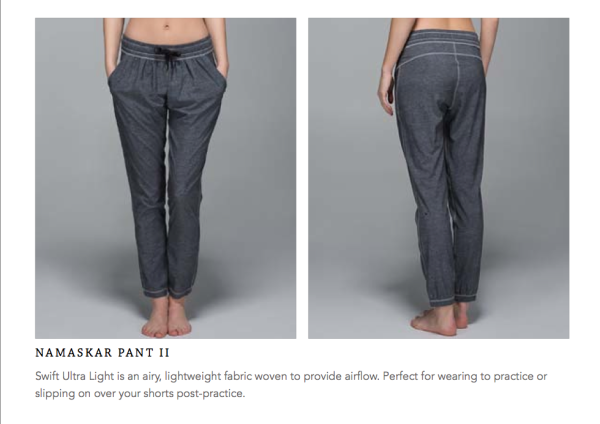 The namaskar pants got a do-over (these are the original namaskar pants for comparison): now they’re made of swift ultra light instead of luon.  It’s tough to tell whether there were any fit updates since the model is pulling on the pockets.  The contrast seams on this pair do nothing for me. 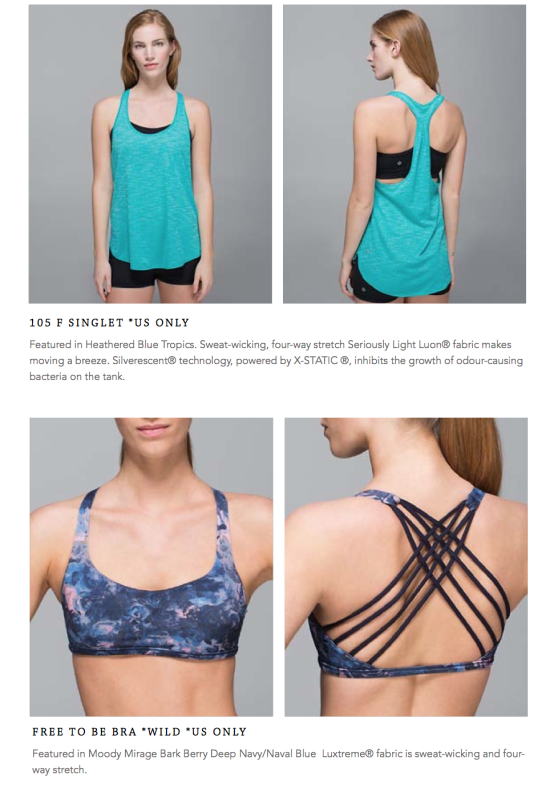 It looks like blue tropics is making a little bit of a comeback this spring.  It was a spring color for 2014, but is a nice complement to some of the current shades also.  There was already a blue tropics 105F singlet last spring, but this looks like it might be one of those space dye 105F’s.  The difference is not listed in the color description, but visually you can see a difference. (For an example of what I mean by a space dye 105F, see this boom juice 105F.)

The US continues to be ahead of Canada with FTBW uploads (although Canada seems to get more new colors in stores first), with the moody mirage coming this week.  This pattern first showed up overseas during the first week of this month, so it’s taken a few weeks to finally make it to our continent. 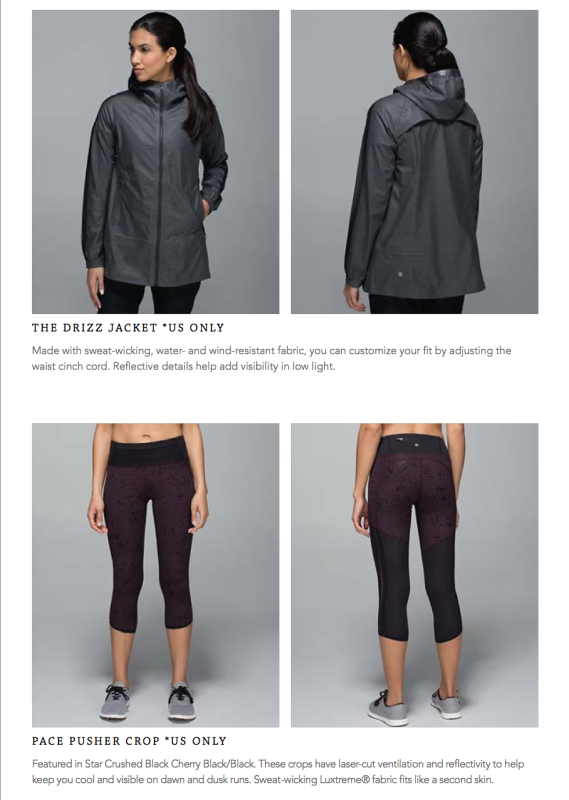 Another rain jacket is on its way: the drizz jacket.  I can’t help but think of how much “drizz” sounds like a rather inappropriate slang term.  Just me?  Anyway, this one is fairly nondescript, but might be popular if it comes in interesting colors.  No info on material either.

Lastly, this one is a total surprise: apparently, the star crushed print has a black cherry variety.  This pattern could be really pretty if it comes on other things.  The mesh block on these pace pusher crops is a little bit less obvious than the mesh on the brush strokes pace pushers, but still may be a dealbreaker for some.  Also, a lot of these patterned fabrics seem to be plagued by sheerness issues, so obviously that could be a dealbreaker too.