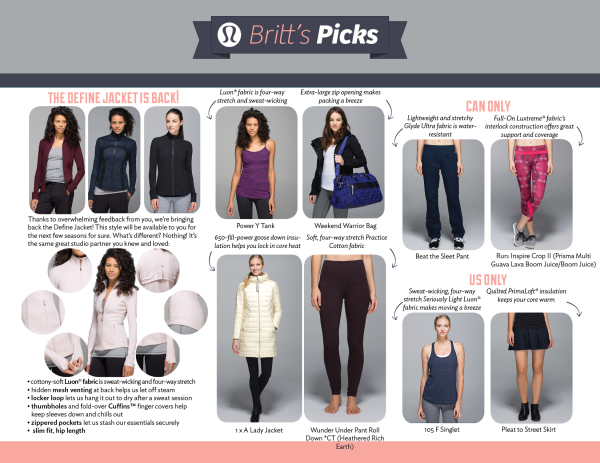 Britt’s picks is finally up!  Britt notes that it will have a new name and a new look as of next week.

– I was right!  The weekend warrior bag is coming back.  The houndstooth pigment pattern is even more apparent in this pic.

– Loads and loads of define jackets!  Colors look like inkwell geo soul(?), bordeaux drama, black, and neutral blush.  And maybe the giant herringbone from earlier today??  None of the colors shown here tempt me, but I would dig herringbone.

– There’s a hyperstripe power y that isn’t particularly exciting, and also the ghost 1x a lady jacket that was already spotted overseas.

– Canada will get new beat the sleet pants.  I wonder if these are the winter pants for the year, like last year’s dog runners?  Doesn’t say if they’ll have leggings underneath.

– US will get an (I assume) inkwell geo soul pleat to street skirt.

– I’m not sure what the new 105F singlet is.  It looks just like the inkwell one that was uploaded recently, but the pics are different.  So, I don’t know what the deal is there.  Maybe it’s euro navy, the new color in Australia?  Beats me.