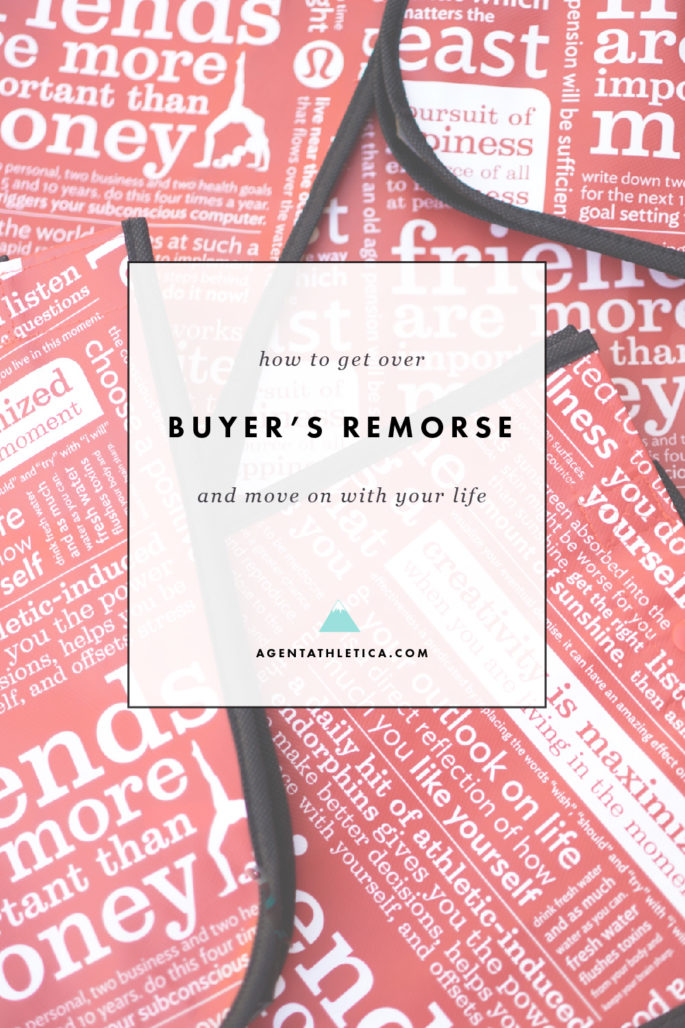 A couple weeks ago, I wrote about buyer’s remorse and how to avoid it.  I included a few tips designed to help you stay away from bad purchases.

But of course, the reality is that even with the best intentions, less-than-ideal choices still happen.  No one’s perfect!  What do you do when it’s too late and you’re stuck with a bad buy?  Here are a couple tips for dealing with buyer’s remorse once it’s already happened.

One of the first things to do when you’ve made a bad purchase is to figure out why it happened.  I don’t know about you, but when I understand the underlying issue, it’s easier for me to accept it and move on.

Think through the circumstances when you made the decision to buy.  What did you overlook about the product, or what created the feeling that you needed to buy it?  Why didn’t you return the item: did you run out of time, was it against policy, did you think it would grow on you…?  What could you do differently next time?

Once you’ve identified what went wrong, add it to your mental list of what to do (and what not to do!) next time you’re shopping.

Forget what you paid

Once we’ve spent money on something, it’s easy to feel like you have to somehow make it worth it.  I hate to break it to you, but once you’ve spent the money, the amount you paid will NOT change no matter what you do next.  You’re better off ejecting that little fact of the price from your memory.  Instead, make a decision without factoring in guilt over how expensive it was.

When you spend money on something, you might try to convince yourself you like it.  For example, let’s say you spend $200 on a purse that you don’t like.  You begrudgingly use it a few times but you still don’t love it.  Or maybe you buy an expensive pair of leggings.  They don’t really fit and they don’t work well for your workouts, but you force yourself to wear them anyway because they were expensive.  Eventually, they probably end up collecting dust, unloved and unworn.

The thing is, how much you paid shouldn’t be something you use to guilt yourself.  Simply put, you should keep things that work for you and that you love, and figure out another plan for the things that don’t.  What you paid shouldn’t come into play because whether you wear it or not does nothing to change that cost.

A particularly tricky place this pops up is selling.  When I buy something that I regret, I’ll usually try to sell it to recoup some of my costs.  But, this can get me in trouble.  If I spent $100 on something, it’s easy to be stubborn and try to get, say, $75 for it, even if a more reasonable price might be $40.  Here’s the thing: if it never sells, my price is irrelevant.  It’s better to have it sell for $40 and actually get that money back than be stubborn on my price and ultimately make $0.

I’ll be the first to say that this is a really tough lesson to internalize.  But the more I can forget about what I paid, the better decisions I make on what to do next.

P.S. In economics, this concept is called the sunk cost fallacy.

Make a plan and move on

More often than not, the things I regret buying are things I don’t actually like or won’t really use.

When I can’t reverse the purchase, sometimes I try to force myself into liking it.  This almost never works.  I’ve learned that when I use brute force method of trying to make it work, I usually end up just wasting my time and energy.

This also ties back into the issue of what you paid.  You might decide to keep something just because you feel guilty about buying it.  The problem is, holding onto something you don’t like will just resurrect those feelings of guilt over and over.  Stop putting yourself through that nonsense!  It feels good to clear the mental clutter and guilt of bad purchases.

My first line of defense against bad purchases is always selling.  Chances are that whatever I bought is still new, which usually makes it a little easier to sell.  Getting a few dollars back in my pocket always helps facilitate forgetting about it and moving on.  If selling isn’t an option, I’ll look for other ways to put it to good use, like giving it to a friend who might need or want it.  The good feeling of doing something nice for someone else is a great antidote to guilt.

On the other hand, maybe the source of your regret is that you bought something you really liked, but you paid too much for it.  In this case, I try my best to just let go of that guilt and practice a little self-forgiveness.  To make up for it, I try to be more stingy with my purchases for a little bit until I’ve balanced out the indiscretion.  But if you truly love it, work toward putting the price in the past and instead focus on really enjoying what you have.