It’s the first fall upload, and that means *sooooo* many new things!  New shades of red, blue, and pink are here (plus some accents), plus new butterfly and snake prints.  I’ll do my best to hit the high points!  Also, this was the second week in a row (that I know of) where upload was earlier than 3:45 PT.  It was somewhere in the neighborhood of 3:15, I think. 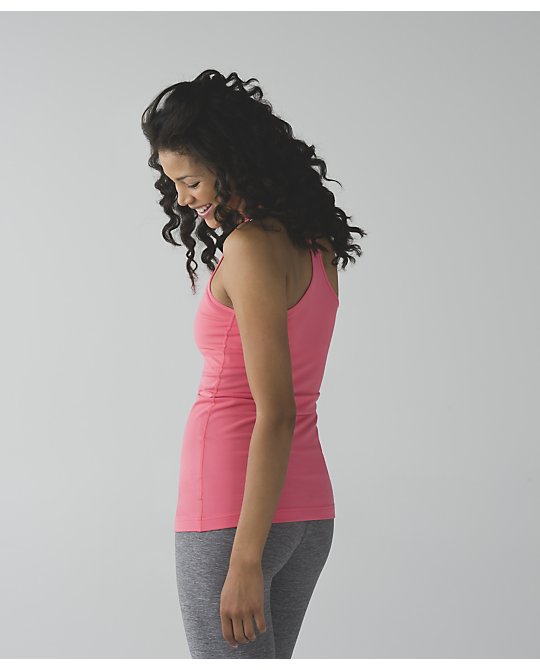 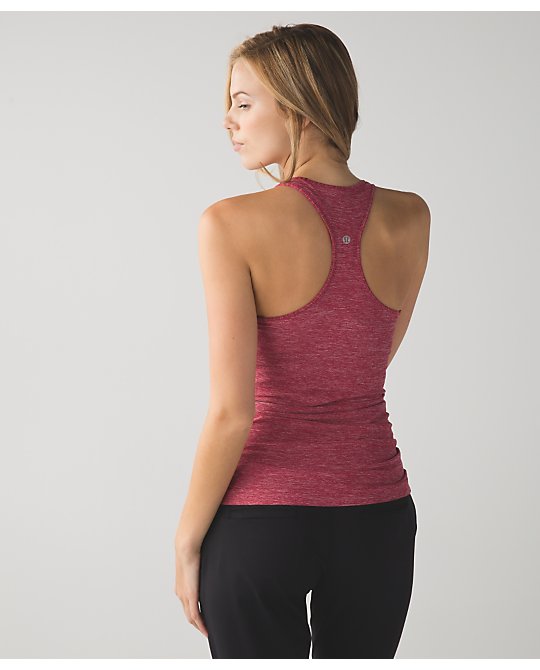 New pink lemonade and heathered cranberry cool racerbacks in Canada.  There was big drama the past few days after the new heathered cranberry CRB was tagged and ringing up as $48 in store.  People were peeved it seemed to be a sign of another (kind of arbitrary) price hike.  However, the same CRB is listed at the regular $42 online.  This is just one of quite a few pricing inconsistencies lately.  It often seems lulu’s left hand does not know what it’s right hand is doing, so to speak. 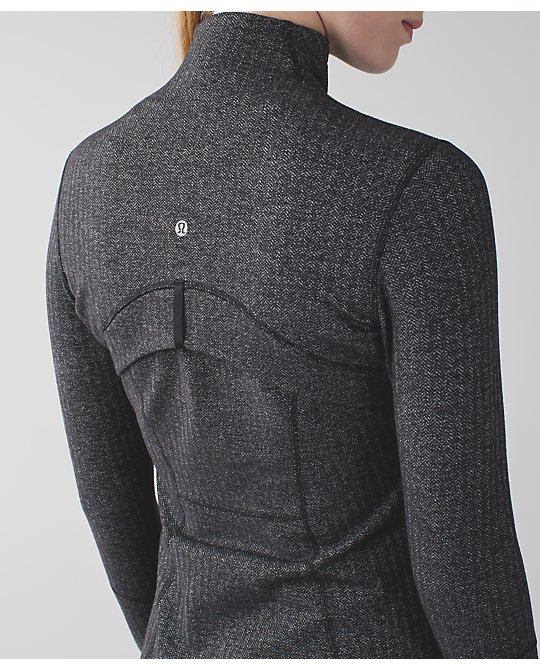 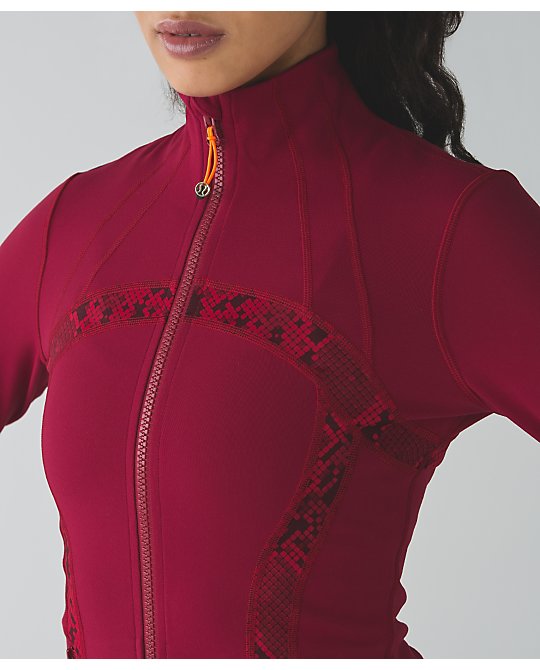 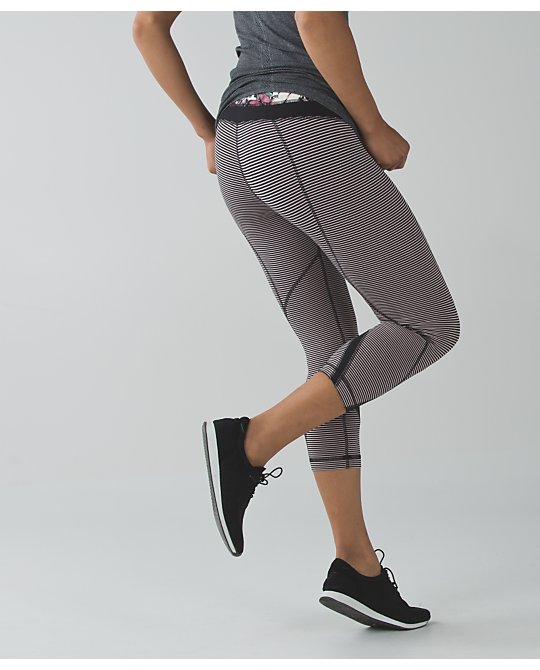 I actually kind of like these mini pop stripe inspire crops.  The light stripe color is another new fall shade, mink berry, not white. 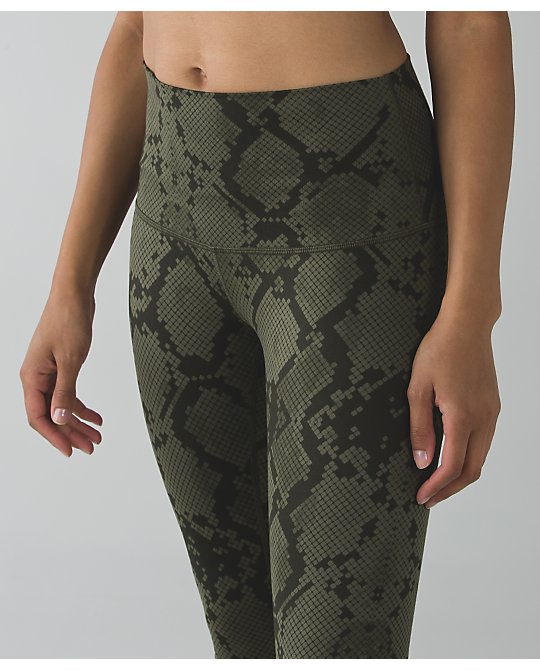 New ziggy snake fatigue green hi-rise wunder under pants.  Take note: the new rolldowns are now called hi-rise.  A commenter noted that there are two changes: the new hi-rise now have a waistband pocket (somewhat visible in this pic), and the fit at the waist has been narrowed slightly.  There were two other hi-rise colors uploaded, too: black and so fly butterfly fatigue green. 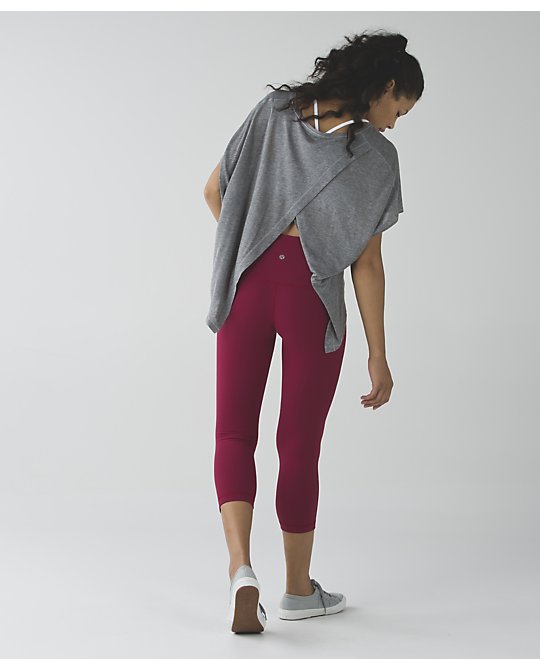 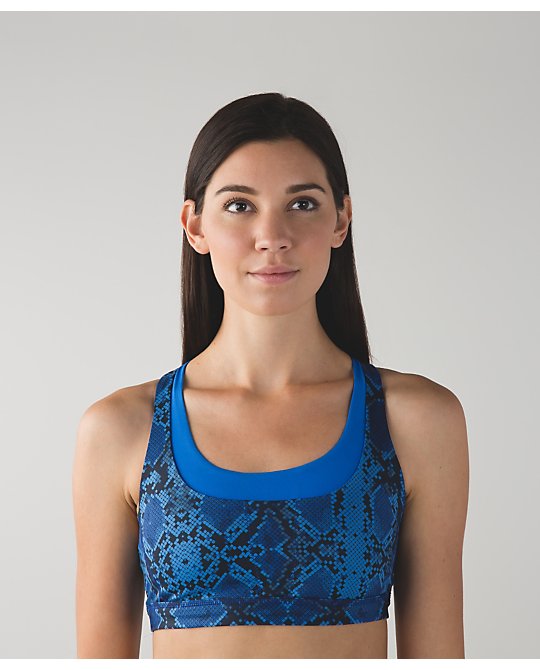 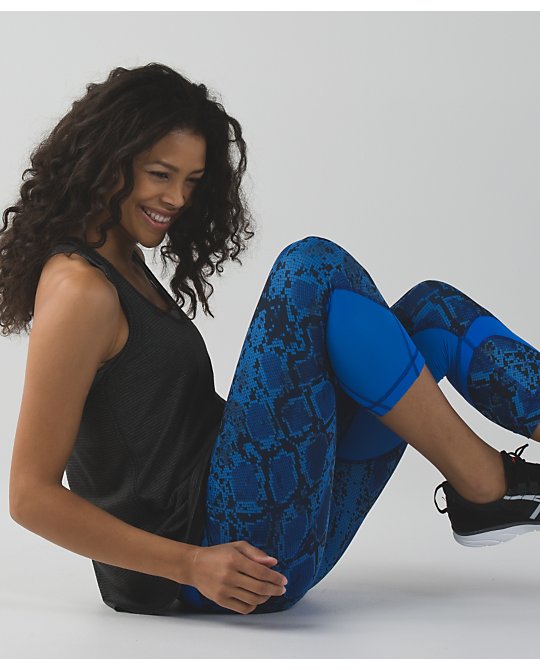 Another new print: ziggy snake pipe dream blue/sapphire blue.  Canada got the stuff your bra, US got the inspire crops.  This was the best pic I could get of the inspires, since everything else was either too close or too posed to be able to see the full pants. 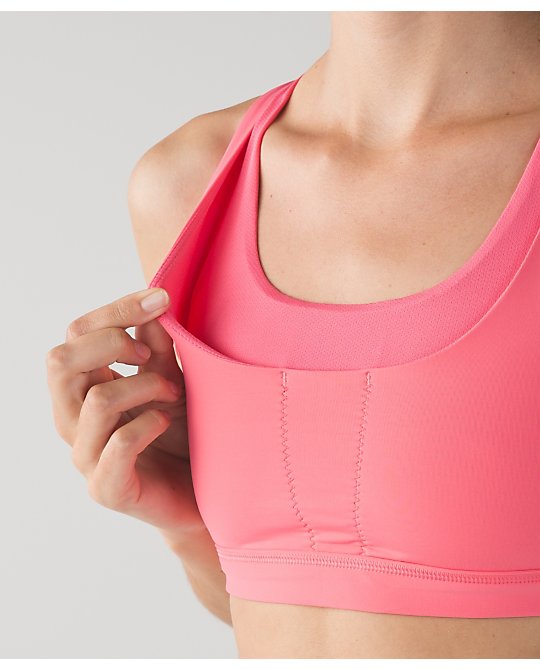 Also: new pink lemonade stuff your bra in Canada.  Both sides also got an energy bra in this shade.  I would love a pink bra, but it’s not a true pink, so I’m not sure how well it’ll match things.  I might give it a shot when the RSYB hits the US, since bra returns are free anyway.  Also, the US still doesn’t have the peacock blue RSYB.  Sigh. 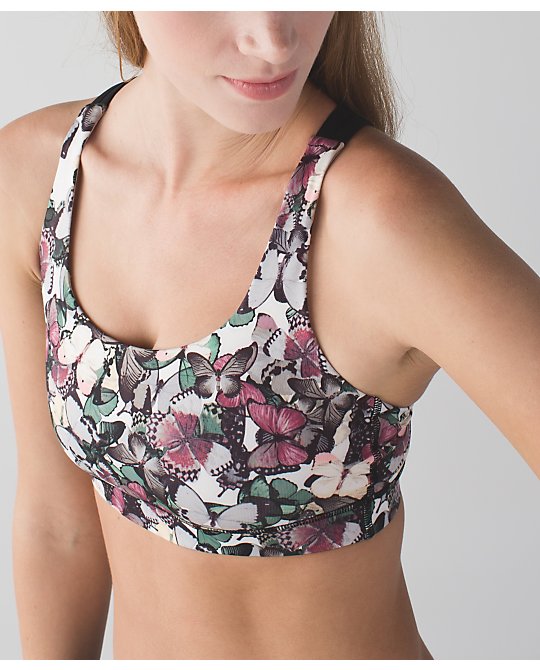 Here’s another variation of the so fly butterfly print: angel wing multi. (Energy bra; Canada only.) 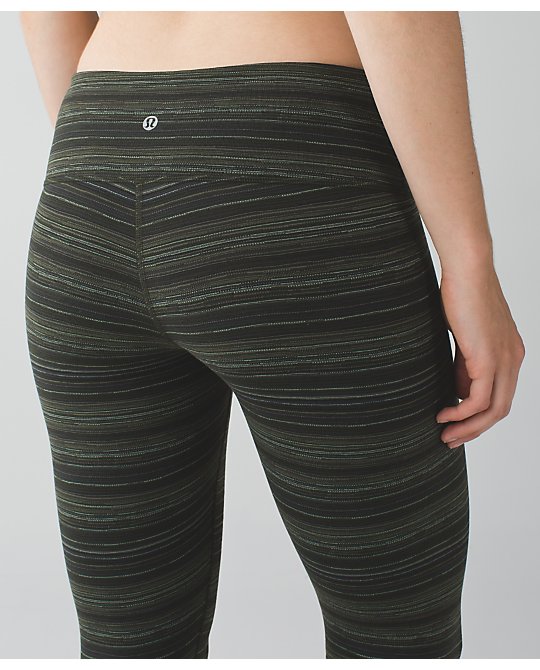 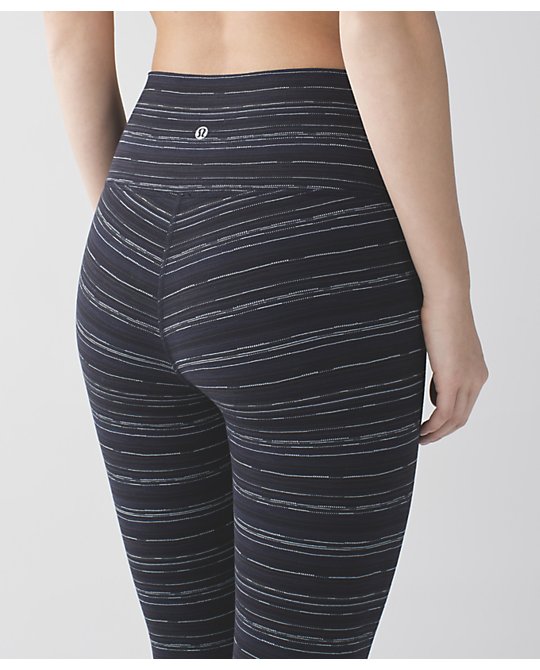 Note that the new cyber stripe gator greens are marked as “Wunder Under Pant III“.  First of all: where was the WUP II?  Second of all, the all-important question: what changed??  I’m guessing it has to do with the leg opening, at the least.  The new description states the leg opening is 7 3/4”, while the regular WUP page says they have a leg opening of 11″ (which, oddly, is the same opening as WUC even though those hit at a wider part of the lower leg).  I’m wondering if the whole leg has been slimmed as well, or just the lower leg/hem.  Note that the new hi-rise versions have the same leg opening listed as the III’s. 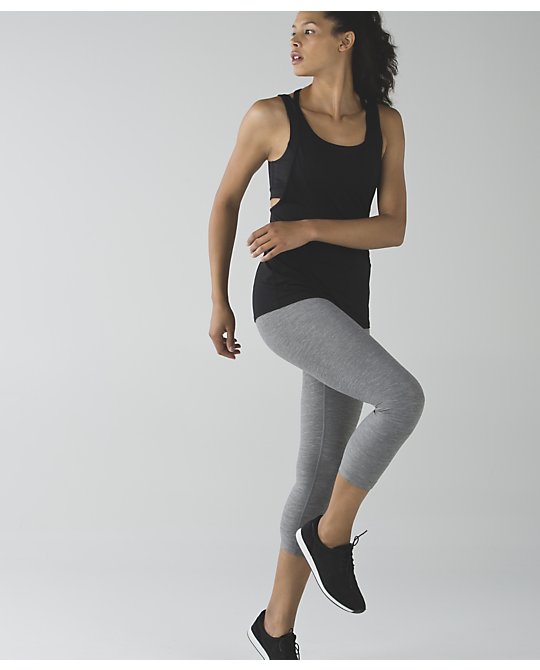 That said, US got these new heathered slate crops marked as “Wunder Under Crop III“.  The WUC II was the result of lengthening the inseam.  Between the WUC II and WUC III, the leg openings are marked as 11 1/8″ and 11″, respectively.  The hems gape on me on WUC II (haaate), so I’ll be interested to see if the WUC III are better, though I’m not sure 1/8″ is gonna cut it.  And again, curious about whether the leg openings have changed.  If anyone gets a pair of either of the new WU III’s, I’d love to hear what you discover. 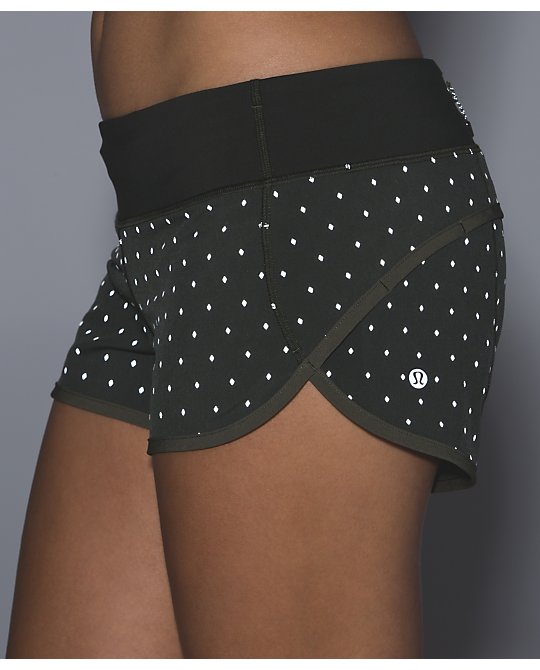 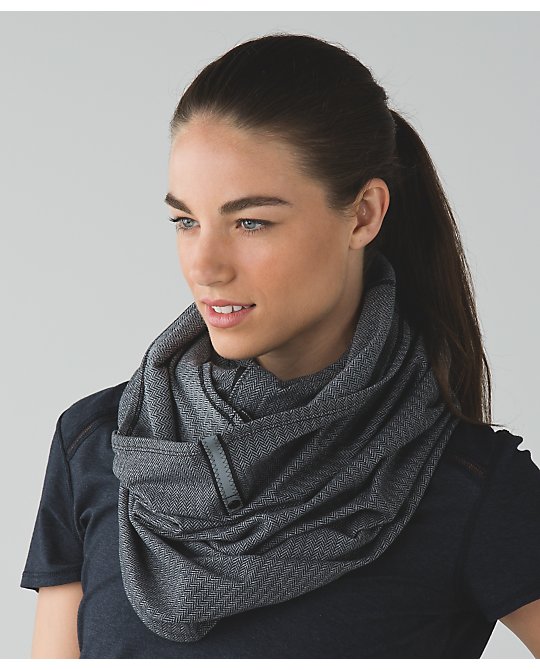 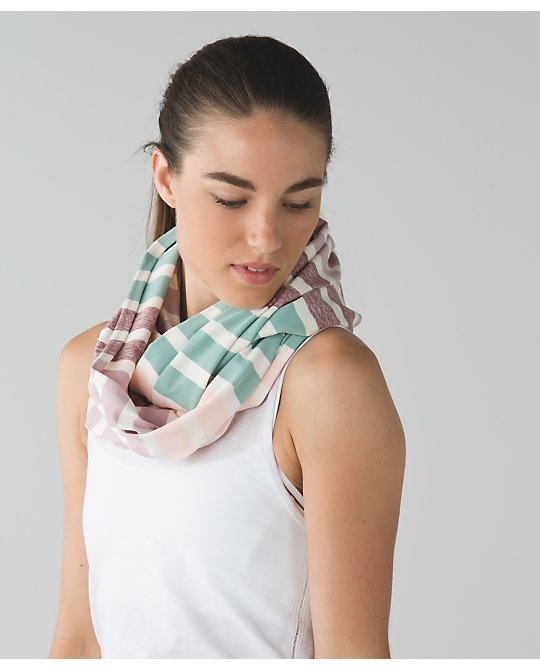 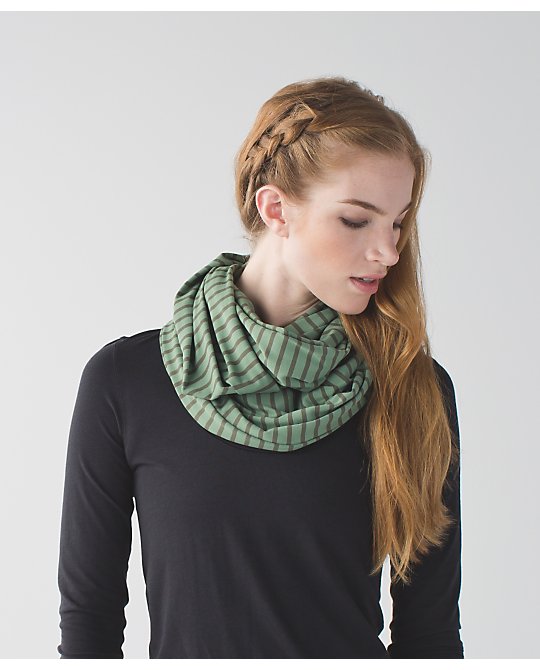 New vinyasa scarves: heathered black herringbone, triplet twin stripe angel wing, and deenie stripe desert olive/fatigue.  Notice the little tab in the herringbone pic is different from previous vinyasas.  It’s reflective.  The triplet twin stripe has this tab, too.  I wonder if all vinyasas will be this way now? 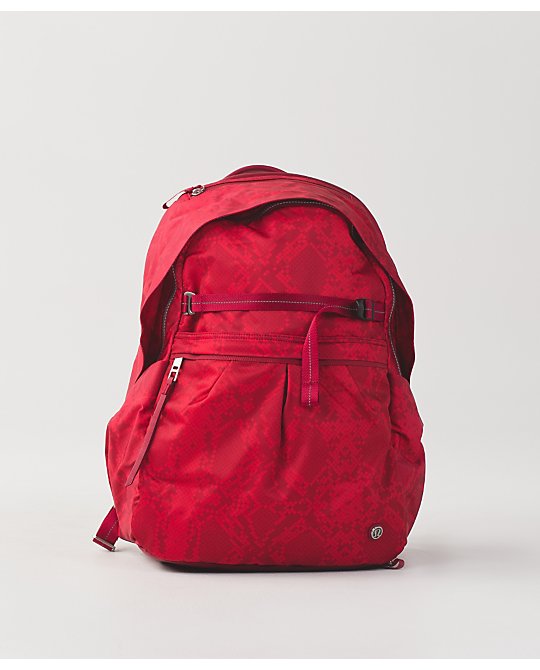 New pack it up backpack, a little like the pack to reality backpack from previous seasons. (Sapphire bllue sh 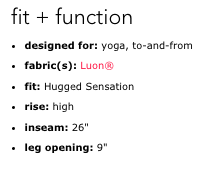 Also, looks like lulu is changing their verbage on product descriptions.  Previously, where there was a line that said “fit: tight” or “fit: loose” or whatever, it now says “fit: Hugged Sensation” or “fit: Relaxed Sensation”.  Sorry, lulu, I have to say it: that sounds absolutely absurd.

Pretty plume WUC are in the US!

New silverescent tank style in Canada: the sweat it out racer.

In case anyone cares about the wrap mesh high times that aren’t pretty plume, Canada got black and ace spot today.

New run times shorts in Canada in butterfly and in pink lemonade.  Pink lemonade speeds would be hard to resist…

The banners in each product section (e.g., tanks, crops) are usually updated for the season along with the first upload, but they haven’t been yet!  I’ll be checking back to try to sneak some peeks of what’s to come.  The fall video hasn’t come out yet either–I guess the team is still editing these.