It’s only December, and my hunt for winter-ready running/workout gear has not slowed down.  Next on the docket, I sampled some of lululemon’s new releases this season.  Here’s what I thought. 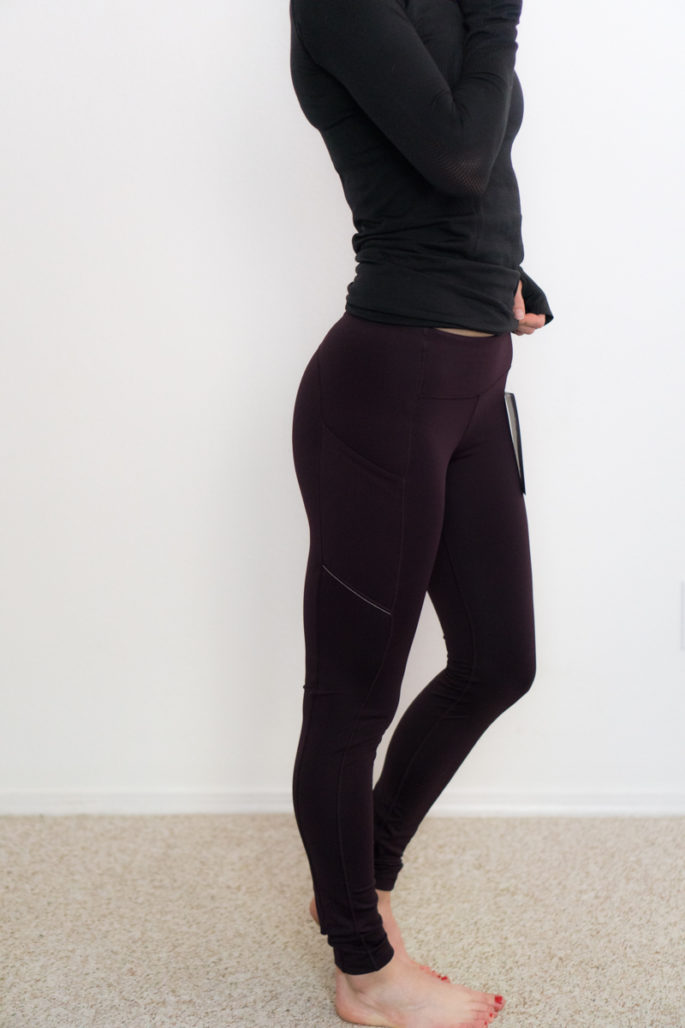 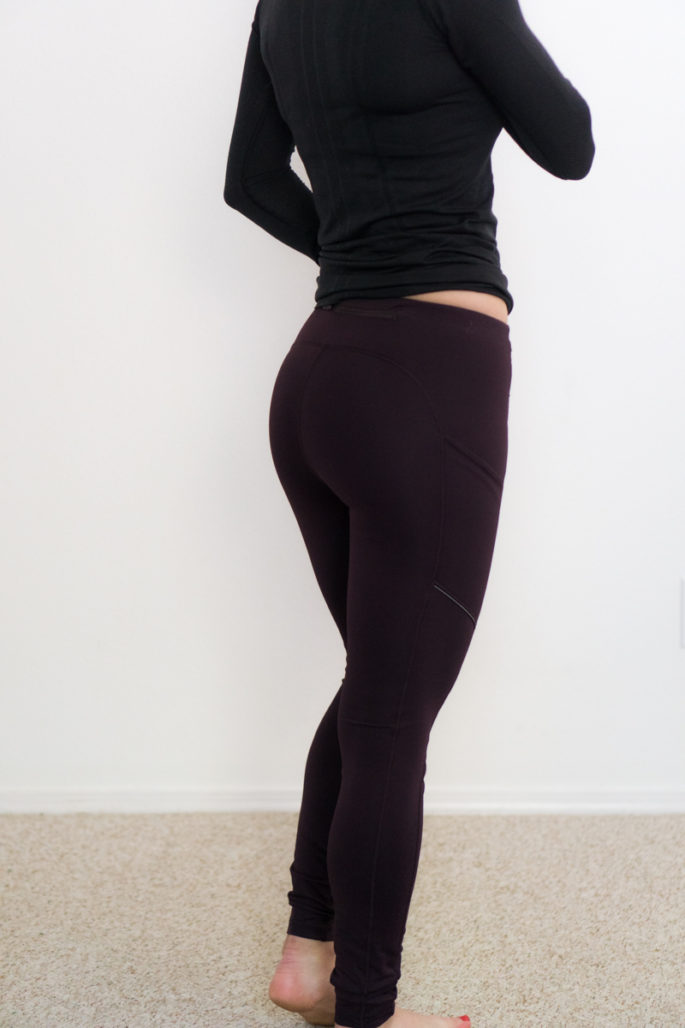 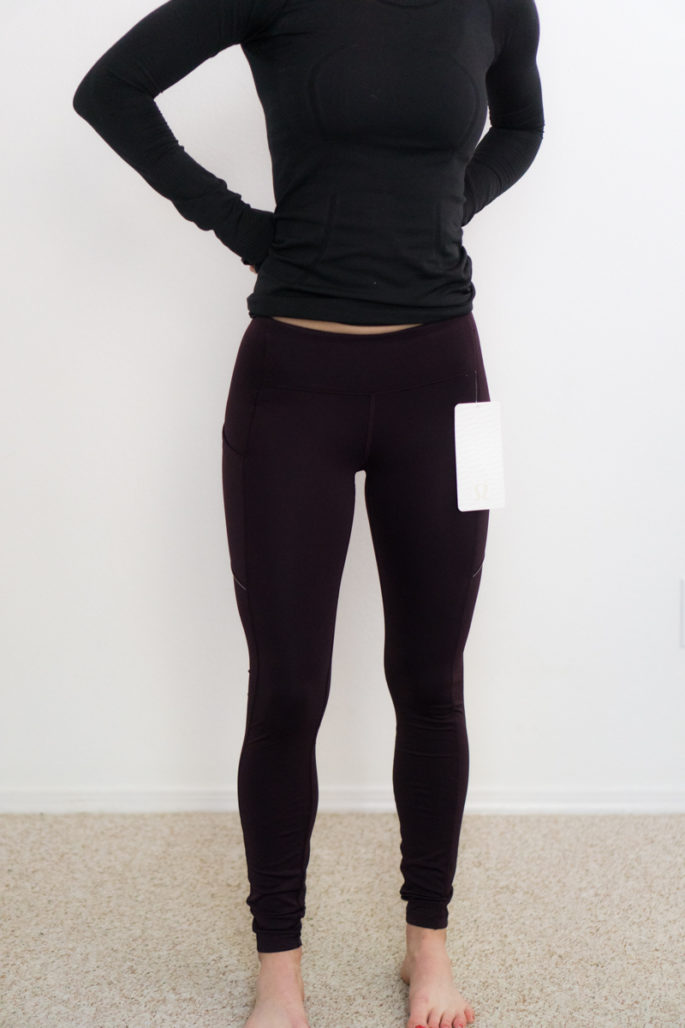 This was my first time trying the speed up tights, i.e., the new version of lululemon’s flagship running tights.  Although I had no strong opinions on them going into it, I wasn’t particularly impressed with the fit.  I purchased my usual lululemon size, but for some reason, the waist just did not feel right on me.  First, it was difficult to get on, then once I got them situaiton, the waist/hip area did not feel as secure as I’m used to.  It didn’t feel like the incorrect size for me, the fit just felt awkward.

Lululemon’s tech fleece has been getting progressively thinner, but I keep holding out hope they’ll go back to being thick enough.  Unfortunately, this year wasn’t a winner for me either.  Compared with my toasty tech tights from 2015, these tights are noticeably thinner.  Although these are warmer than your standard luxtreme running tights from lulu, don’t expect hardcore warmth.  The two pairs of Athleta leggings I reviewed in this post are much better for real thermal weight, in my opinion. 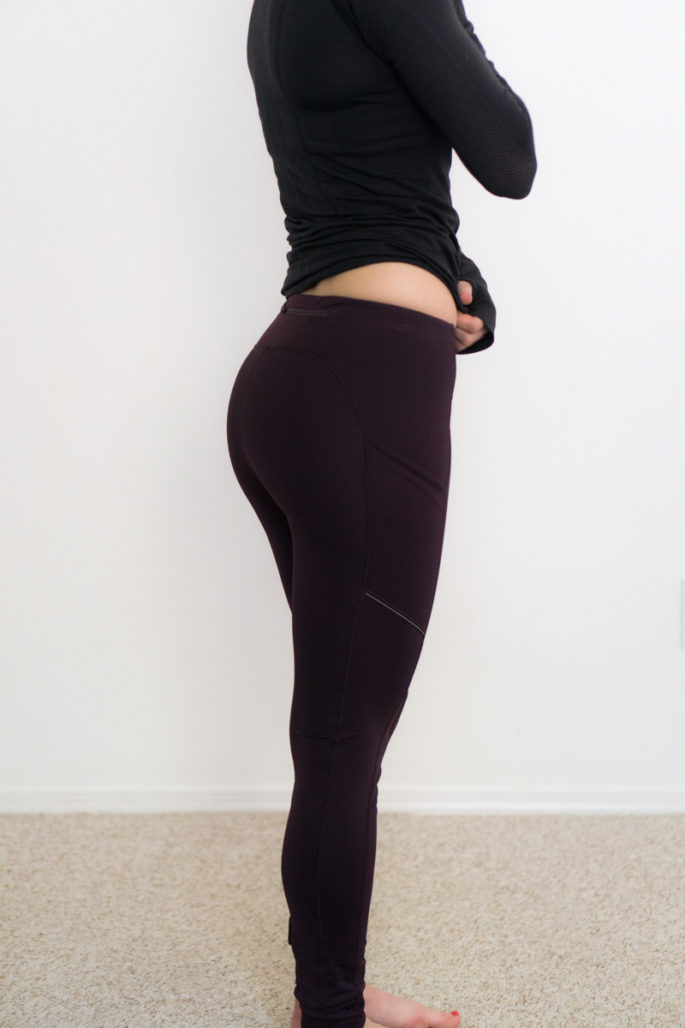 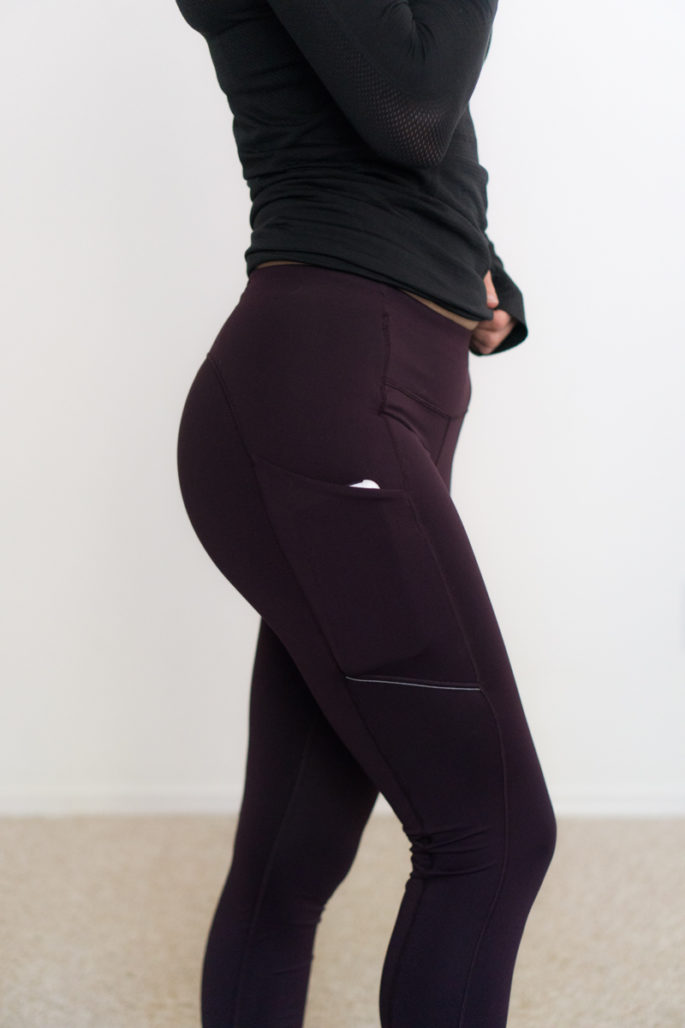 On the plus side, the design looks quite sleek, black cherry is lovely, and the fabric passed the bend test with flying colors.  The side pockets are also plenty large and fit my iPhone 7.  But, that wasn’t enough to redeem them for the awkward fit and the underwhelming warmth.

As you probably could’ve guessed, these went back. 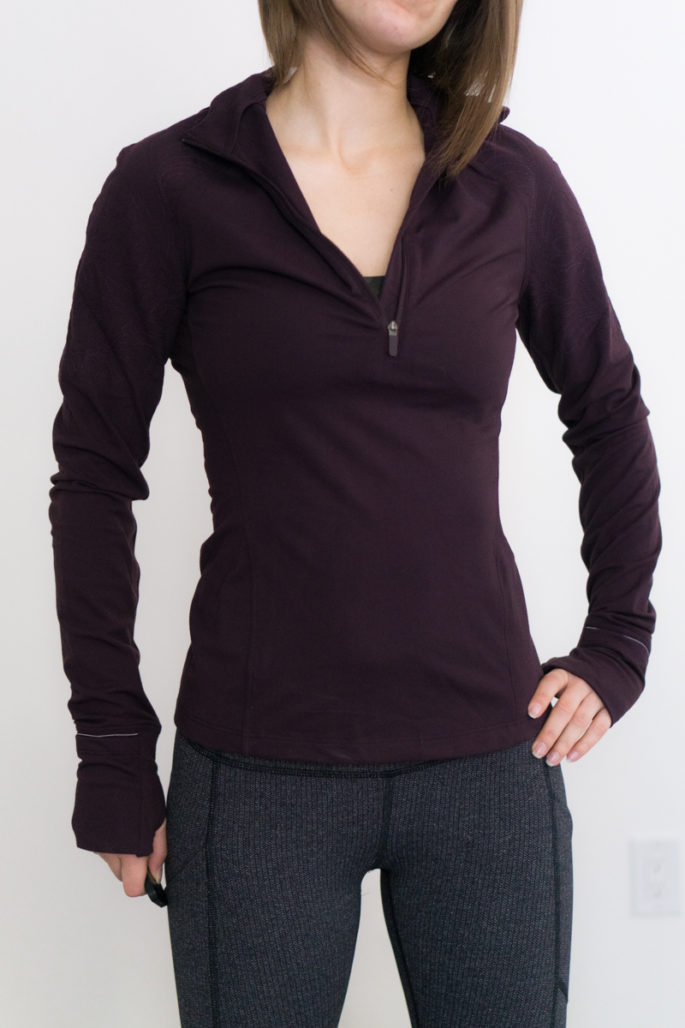 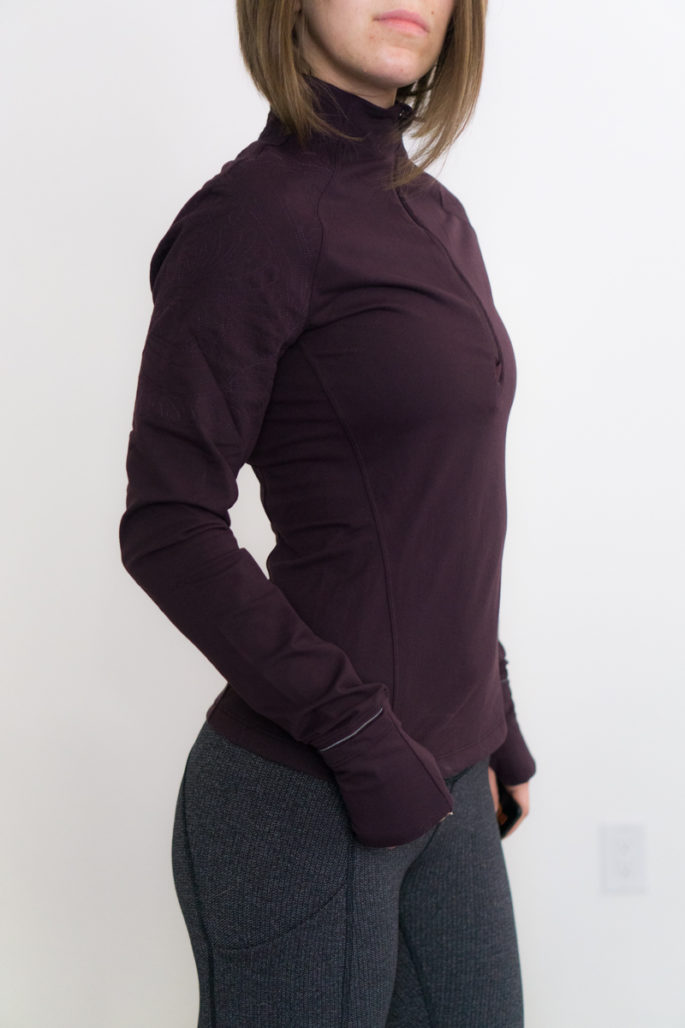 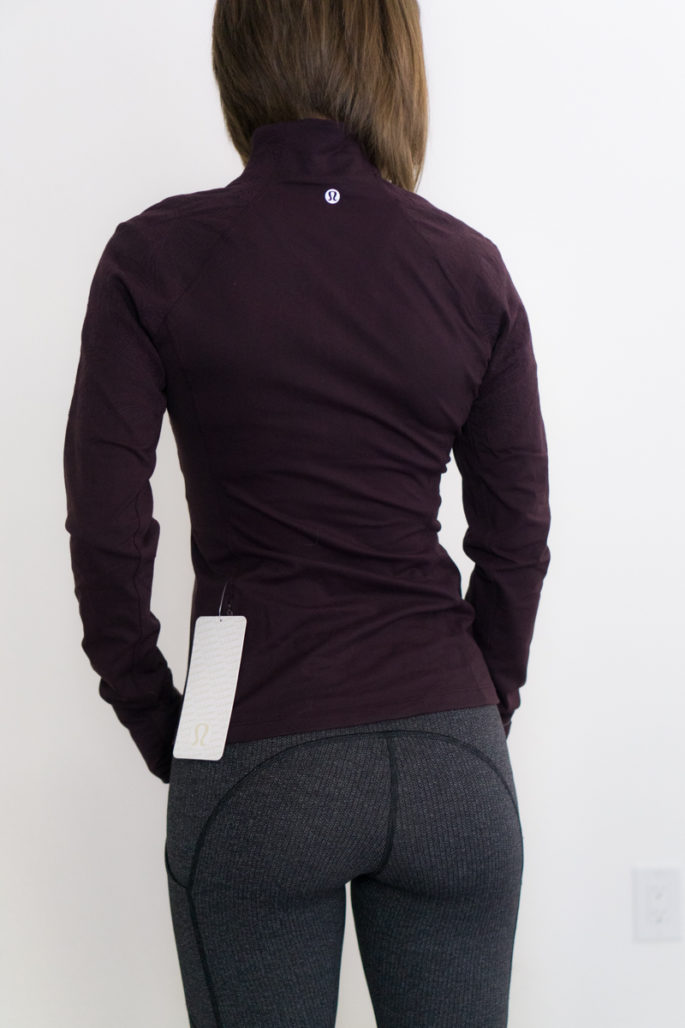 One of the selling points of this top is the embroidered details across the shoulders.  Although it’s quite pretty and unique, unfortunately the embroidery makes the shoulders a bit stiff.  It’s hard to capture in photos since it’s most obvious during movement, but you can sort of get a idea of it.  I have narrow shoulders and I just did not fill out the upper half of this top well.

The embroidery also means that the collar sits a bit awkwardly.  It’s not as flexible as most of my other lulu 1/2 zips and thus doesn’t fold down as neatly and easily. 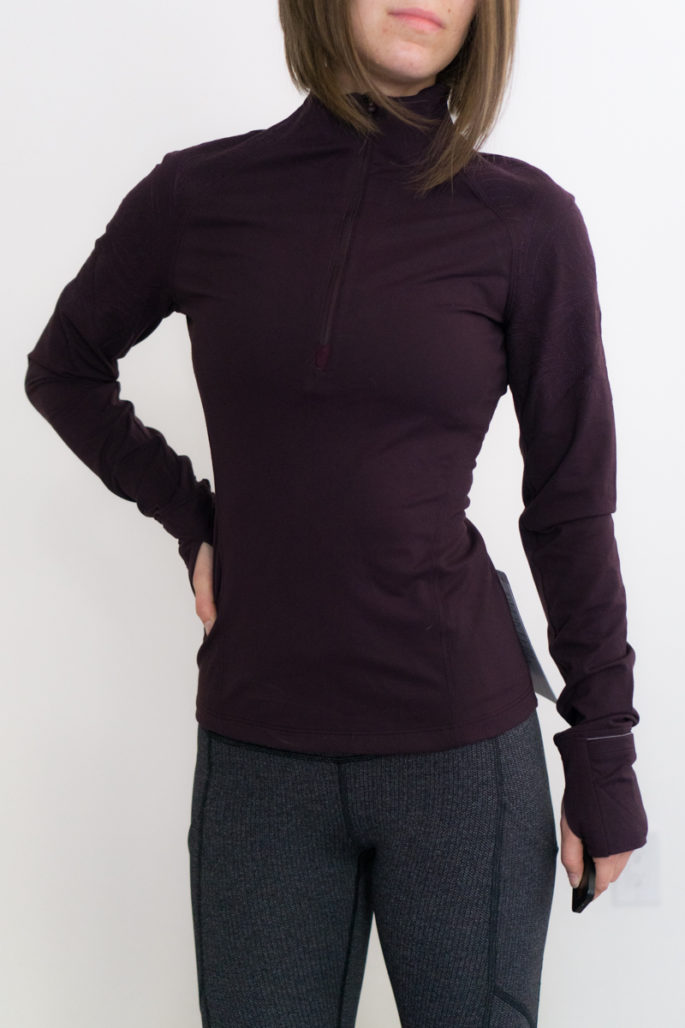 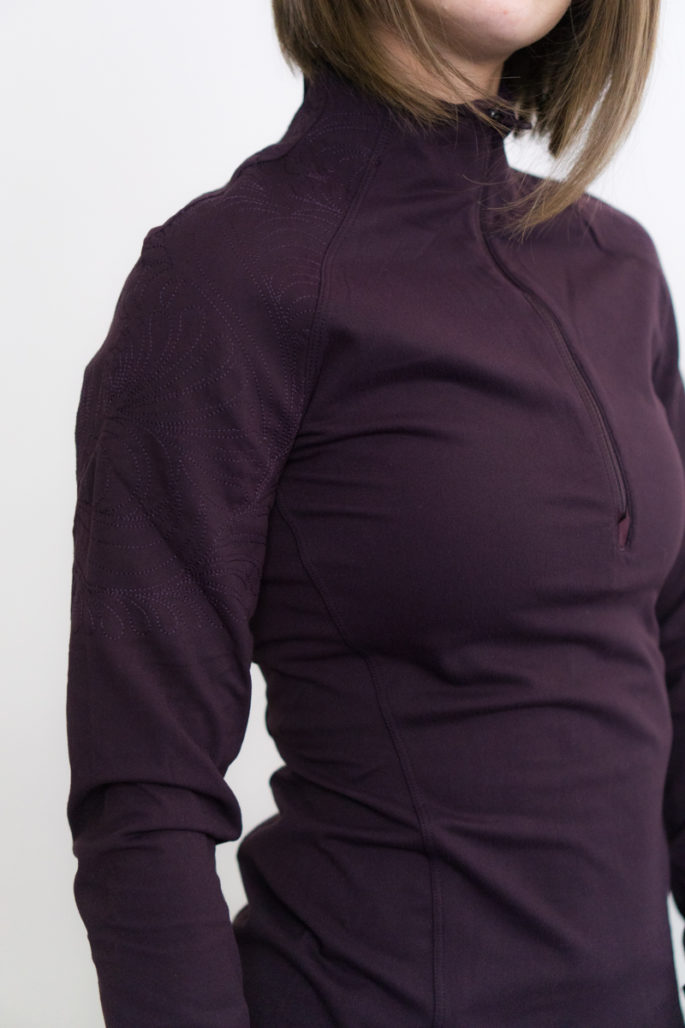 Aside from the shoulder bulk, the fabric itself on the top was not particularly remarkable either.  Although tech fleece is ostensibly lulu’s most serious thermal material, it feels more like a medium weight top, not a full thermal weight.  Besides the embroidered detail, this top doesn’t have much else to make it special.

Another surprising observation about this top is how short it is.  I’m only 5’3″, but this top still hit at the high hip on me.  If you’re quite tall, beware.

Although this top definitely had potential, it missed the mark on several fronts for me, especially considering its hefty price tag (though it’s recently been put on markdown!).  Another one for the return pile. 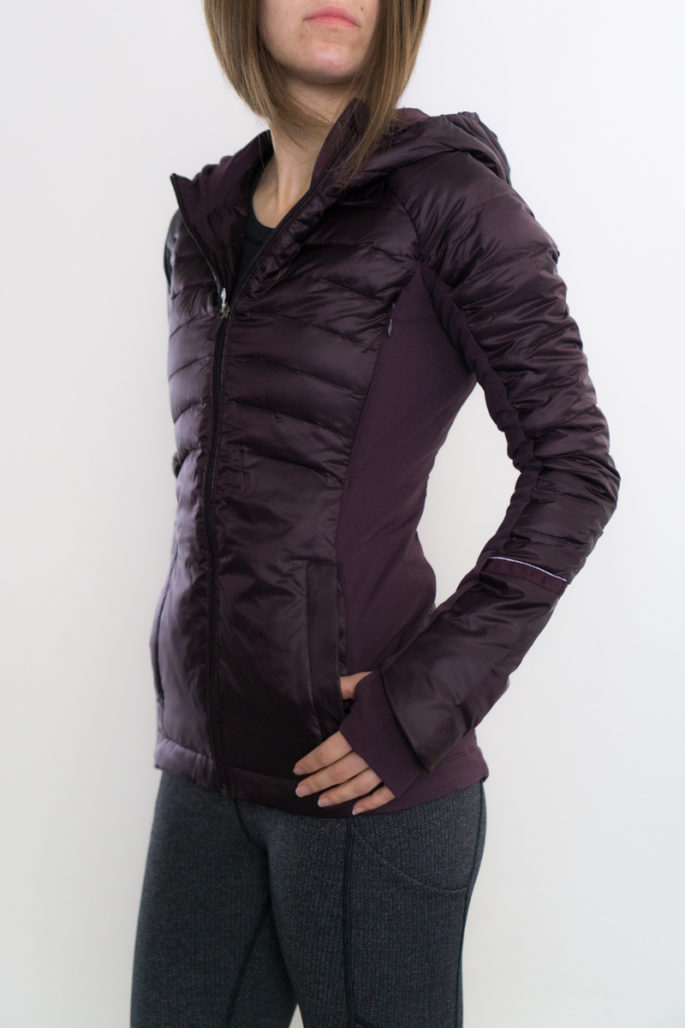 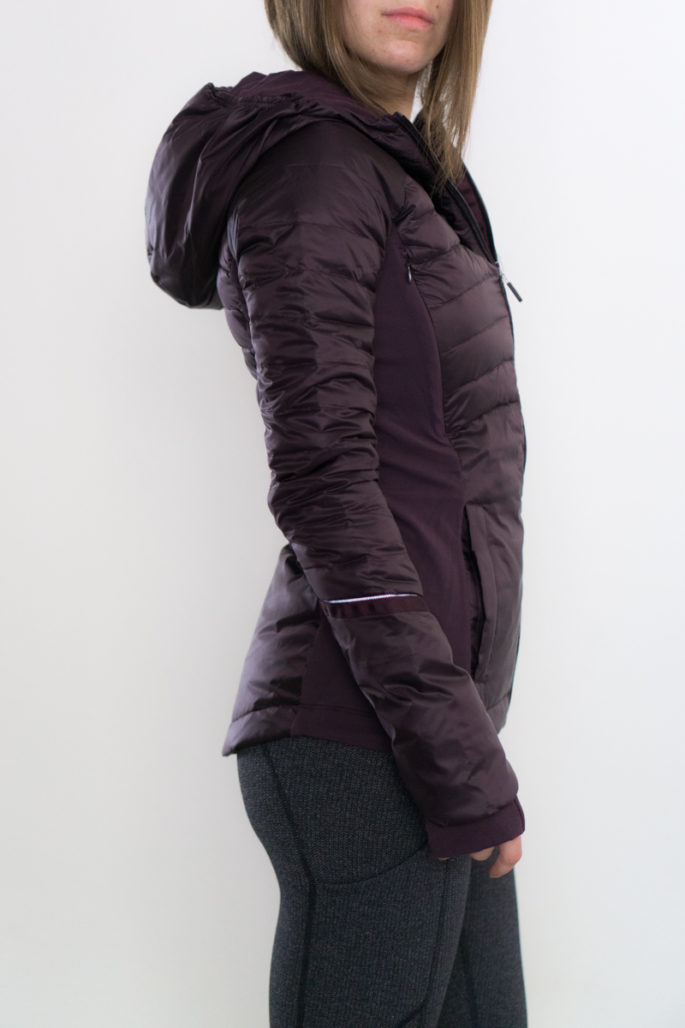 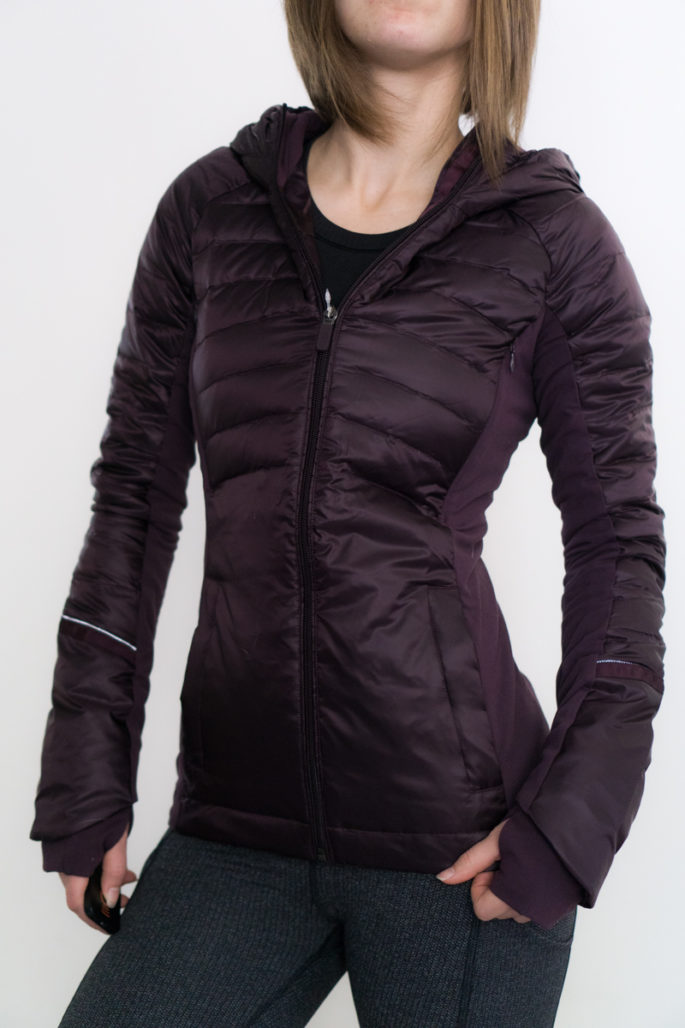 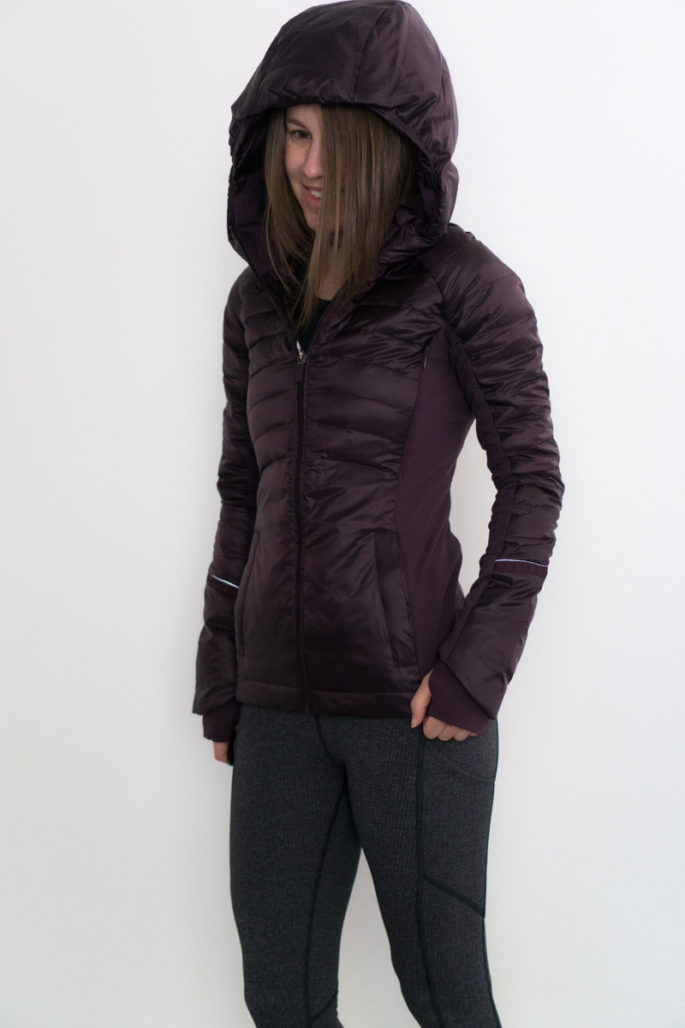 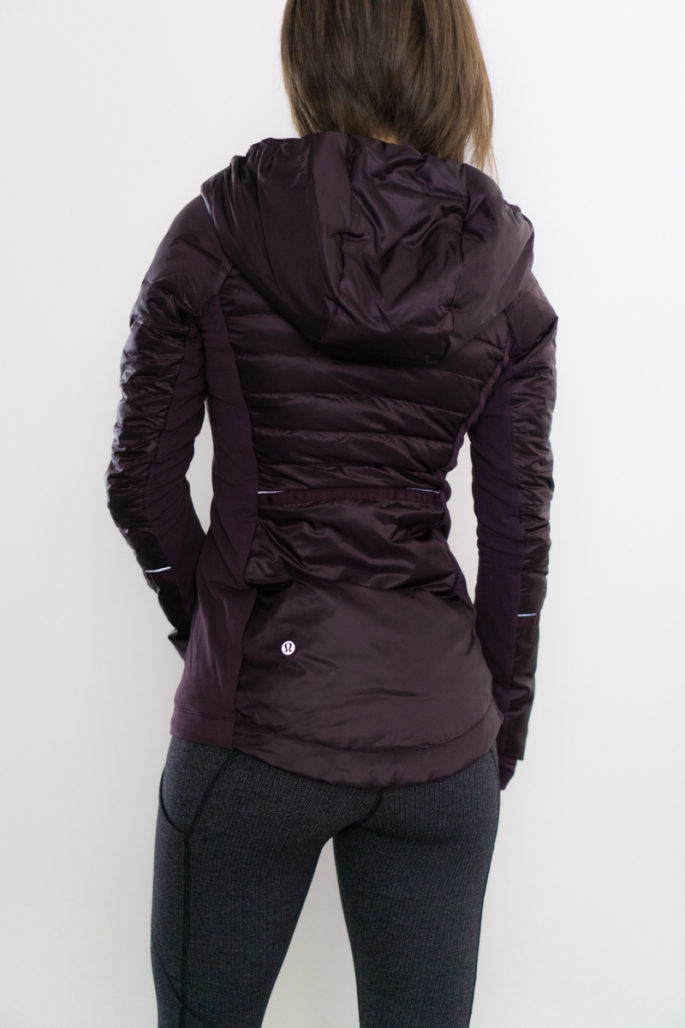 Down for a run jacket ii

This year’s down for a run jacket is an updated version of the one that first came out two years ago. (For comparison, you can see my try-on pics of the first generation DFAR here.) The sizing is about the same; in my opinion, it fits true to size.  My normal size has a tailored fit, but leaves enough room for some layers underneath (e.g., tank and thermal long sleeve).  The back scoops low over your bum to offer additional warmth.  The jacket also features stretch rulu side panels for flexibility, a deep hood, zip pockets, and zip underarm vents.

In general, the fit on this jacket is very flattering and looks quite sharp..  I also prefer the fit of this jacket over the extra mile jacket that I tried and reviewed earlier this season.  Black cherry is a gorgeous shade that’s not quite burgundy and not quite purple.  I’ll admit the color was a big reason I bought this.  Had it only been available in black and white, it wouldn’t have been so compelling.  The inkwell is also very beautiful, though unfortunately both black cherry and inkwell are currently unavailable online. (If you want either color, you can probably still find one in a store and have them ship to you.)

One key change with the second generation DFAR is the addition of rulu cuffs.  I was irritated that the original DFAR did not have the usual foldover cuffs that go past the glyde material, which is a feature I use constantly with my existing lulu puffer.  In fact, the return of the cuffs is a big reason I decided to order this jacket to try–if there were no cuffs, I wouldn’t have bothered.

That said, the material on the cuffs (and the side stretch panels) is quite thin and a bit flimsy.  The exact material used is not listed on the tag and it’s thinner than rulu.  It’s nothing to write home about, but it does get the job done.  Likewise, don’t expect the body of the jacket to be a sturdy puffer either.  It’s not as thick as some of lulu’s puffers from previous years.  In other words, this is a light-to-medium insulating jacket for running, hiking, or anything else where you’ll be active.  It’s not suitable against serious winter temps for casual wear. 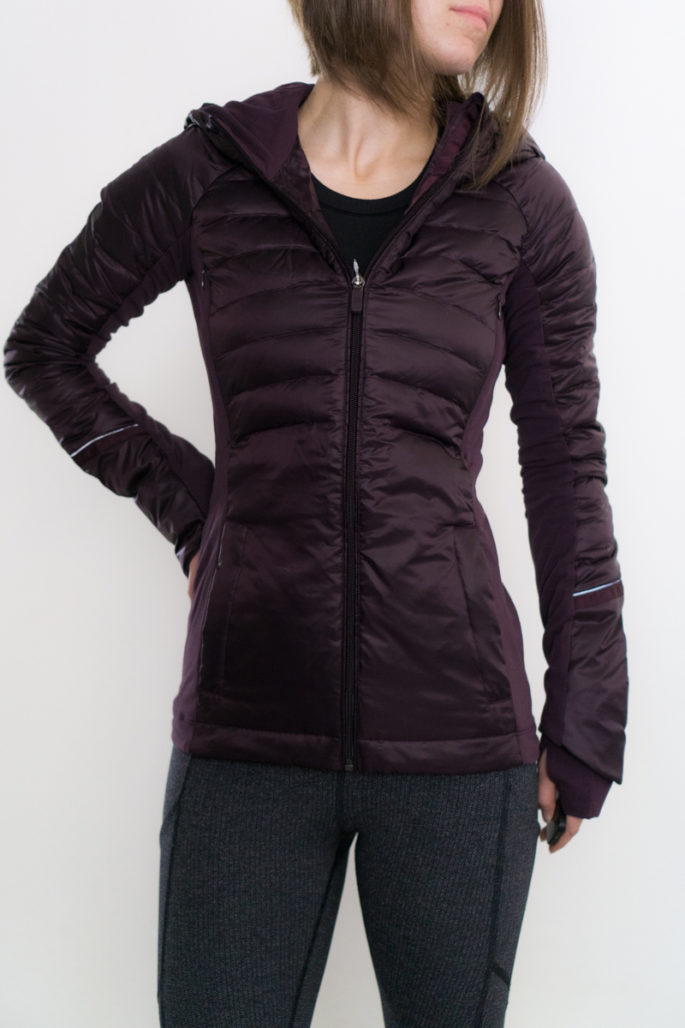 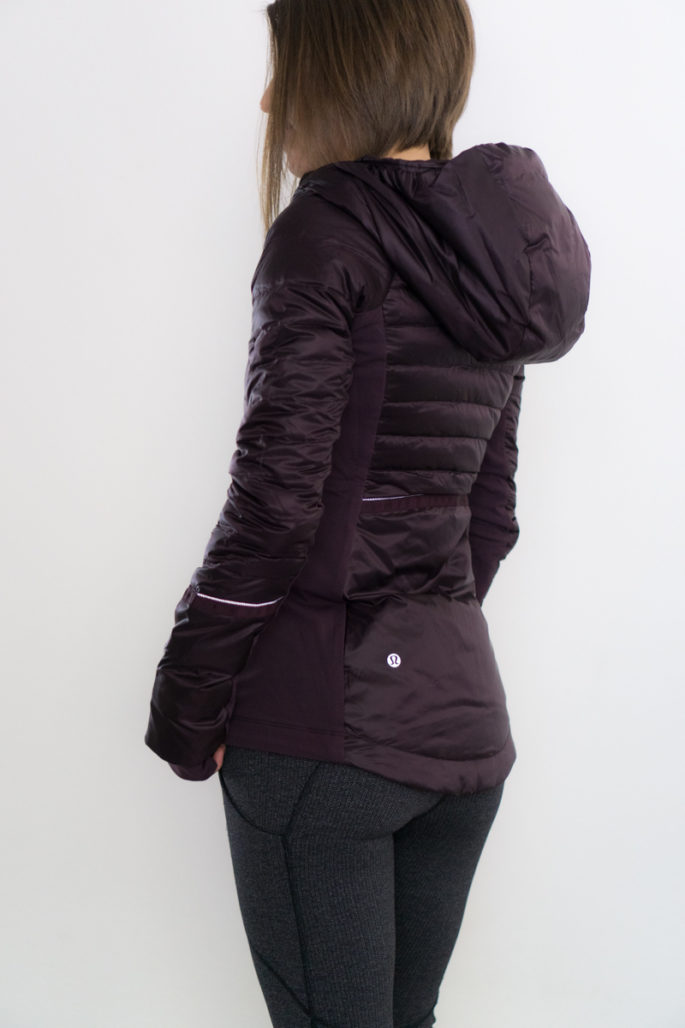 Another difference between the two DFARs is the quilting.  The older version had criss-cross quilting across the back compared to this year’s simple horizontal lines.  The sleeves and front also look slightly different, but it’s fairly subtle.  This year’s fabric also has a bit of a sheen to it.  It’s not excessively shiny, but is noticeably not matte.

Since it’s not a seriously puffy puffer, that means that it compresses well and is quite lightweight.  For that reason, I took this jacket out for its maiden voyage on an 18-mile day hike last week where the temperature ranged from about 20 F up to the 50s.  I layered a tank top and a thermal long sleeve with medium weight tights plus gloves and a hat.  I was comfortably warm for the entire hike, although we were moving at a quick pace that kept my blood flowing.  When the temperatures climbed, I was easily able to roll the jacket up into a chunky burrito and strap it to the outside of my day pack.  Its packability is a distinct advantage this jacket has over my first mile jacket, which is quite a lot heavier and doesn’t compress, and thus only works if I don’t plan on taking it off.

I heard many complaints that the DFAR ii did not live up to its first generation sibling, but my own preferences mean I actually like the new version much better.  At $200, it’s not exactly a bargain for what you’re getting, but considering my other options are quite a lot worse, I’m totally happy with my purchase.

Down for a run jacket ii