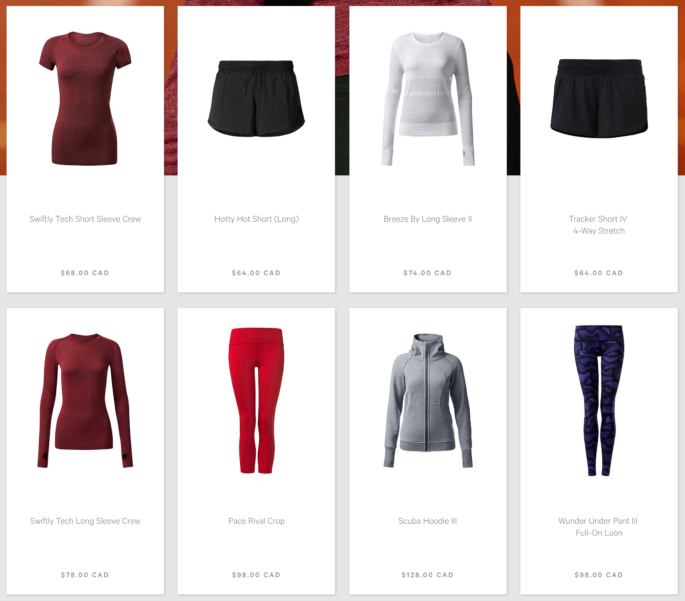 Lululemon is in hot water again.

Even after their pants price hike last fall was met with scathing feedback (I wrote about that here), they’ve ratcheted up prices again on numerous core styles.

Predictably, lululemon is being raked over the coals on social media, with many outraged fans declaring they’re done with the brand.  Let’s take a closer look at what’s happening.

In addition to a handful of across-the-board increases, lululemon has created a price differential between the US dollar and Canadian dollar for the first time ever.  Historically, a lululemon item that was $100 in USD was $100 in CAD.  This practice was actually quite unusual; almost every other brand prices their items in CAD higher than in USD due to the ongoing US-favored exchange rate.  Even so, the new price difference for Canadians adds insult to injury for many already indignant fans.

Price increases for US and Canada

Price increases for Canada only

SeaWheeze on the horizon

A price increase right before SeaWheeze?  I see what you did there, lulu.

I’m sure it’s no coincidence that the prices were raised just days before the SeaWheeze expo.  During the expo, participants in lululemon’s annual SeaWheeze half marathon can shop a special store filled with exclusive designs for the event that aren’t available to purchase anywhere else.  SeaWheeze gear is always in extremely high demand, and the store sells thousands of items in the space of just a couple of days.

Note the price increases are heavily weighted toward technical running gear, i.e., a lot of gear that will surely be part of the SeaWheeze lineup.  On top of that, the SeaWheeze expo is held in Vancouver and therefore priced in Canadian dollars, meaning that many items will be subject to the extra Canadian price increases.  An extra 10% on top of the hundreds of thousands of dollars that SeaWheeze merchandise rakes in will surely be a welcome supplement to their quarter’s bottom line.

Are lululemon’s prices too high?

Many lululemon customers are complaining that they are being priced out of their products, or that the company is insane to think people will pay what they’re asking.  But is that really true?

Let’s take shorts, for example.  At lululemon’s new prices, shorts are $58 across the board.  By comparison, Sweaty Betty’s running shorts are $70.  Nike’s premium shorts are $80.  Smaller premium brands like Alala, Body Language, and Heroine Sport also sell their shorts in the neighborhood of $75-$100.  When comparing lululemon’s sticker price versus most other premium active brands, lululemon is actually on the lower end, not the higher one.

That said, one important consideration when evaluating price is lululemon’s markdown strategy, or lack thereof.  Lululemon’s sale section is often limited to uninspiring discounts of $5 or $10.  Deeper discounts are limited to what are frankly the worst styles.  Although obviously personal preference factors in, very few desirable items ever makes it past a minor markdown, if they get there at all.  Most markdown racks are fraught with ill-fitted, poorly made, or just plain ugly rejects.  Coupon codes, deals, and loyalty incentives are non-existent.

By comparison, similar brands and retailers frequently offer coupon codes, mid-season markdowns, and fabulous end-of-season clearances.  Although it’s not a guarantee that you’ll be able to find everything you want for less than full price, lulu’s competitors make it much easier to find deals on desirable, current-season, well-made designs.

With that in mind, it’s hard to truly compare apples to apples when it comes to lululemon’s prices versus their competitors.  In my opinion, the slightly lower prices paired with the lack of sales puts them in a comparable pricing tier as other premium brands.  The argument that lululemon’s prices have gone too far does not hold water, if you ask me.  Plenty of brands charge just as much if not more than lululemon, and still manage to enjoy healthy revenue and growth.

On top of that, I would be remiss if I didn’t point out the continued robustness of the lululemon resale market.  Let’s take SeaWheeze gear as an example, since that’s particularly timely.

In previous years, a pair of SeaWheeze-exclusive shorts could fetch up to $100 USD on the aftermarket.  Keep in mind that after tax, these only cost about $60 CAD.  A similar pattern arises with other gear: although aftermarket markups aren’t always so dramatic, fans usually end up paying quite a hefty premium for SeaWheeze gear.  Likewise, normal gear occasionally make it into the upper echelon of resale values.  A quick search of the sold listings on eBay shows the recently released dottie tribal wunder under pants going for $150-$190.

Not to mention, after accounting for exchange rates, lululemon prices are much higher in global markets such as Asia and Europe, and yet the brand seems to be doing well overseas.

So, to the contrary, lululemon fans have proven that they actually will pay high prices.  While fans may not be able to buy the same volume of merchandise as they have in the past, the fact of the matter is that there is undeniable evidence that lululemon fans are willing to pony up some serious cash for what they want.

Overall, then, lululemon’s prices remain within a reasonable range when weighed against their competitors and resale prices.   As I wrote in last fall’s pant price commentary, I (still) don’t think lulu is ruining their company off of price alone.  I think their pricing and their choice to raise them reflect reasonable business decisions.  In a vacuum, the prices themselves are not inherently unreasonable.

However, purchasing choices don’t happen in a vacuum.  Other red flags have popped up alongside the price changes, and they cannot be ignored.

One of the biggest complaints about lululemon’s last price increase was that the exact pair of pants on the shelf went up in price literally overnight.  To many fans, this practice felt greedy.  It underlined the notion that the price increases didn’t reflect any actual product improvements, but rather comes off as an attempt to pull a wool over the customer’s eyes and bleed more money out of them.  It is somewhat troubling that the frustration over this particular practice seemed to fall on deaf ears, since lululemon did not attempt to correct course and enact a different, less sour-tasting strategy with this round of price changes.  And of course, any attempt to get an explanation for this from lululemon representatives is met with canned, hollow responses that feel more like hand-waving than actual justification.

For Canadian fans, the feeling of betrayal is even stronger.  Although pricing items higher in Canada makes economic sense, it’s not difficult to imagine how it can feel like lululemon is turning their backs on the very country that birthed them.

Perhaps the most glaring issue with the steady upward creep of prices is the lack of quality improvements to go along with it.  Many quality indicators have continued to deteriorate, meaning you’re not only paying more, you might be getting an inferior product for that extra money.  For example, I paid $82 for a great quality pair of herringbone wunder under pants in 2013.  The same pants would now cost me $98, except the fabric is noticeably thinner now.  Besides thinning fabrics, sheerness remains rampant, waistband elastic still rolls, and seams unravel at the drop of a hat.  Although this isn’t true of every single lululemon item sold, the percentage of complaints and negative reviews is staggering for a company that claims to be high-end.

When you’re continually asked to pay a premium for a declining product, when the company seems to arbitrarily raise the price on the exact same pair of shorts, and when the company utterly refuses to acknowledge any of that as unfair or problematic, you can’t help but feel more than a little swindled.

Turning to their overall treatment of the customer, the picture doesn’t improve much.  Although many employees are delightful and some customers still have great experiences, reports of rudeness and customer-blaming are too frequent to pass off as flukes.  Their vague, dismissive answers (“sign up for our product notifications!”) to straightforward questions are a source of perennial frustration.

For many years, fans have been willing to overlook many of lululemon’s flat sides because, simply enough, their product was worth it.

But each new move from lululemon HQ seems to move the needle closer to outrage; each shift means more and more fans are falling off the lulu bandwagon.  In the months that followed last fall’s price hikes, many fans found themselves slowing their buying habits, but few abandoned the brand altogether.  With this round of changes, a change in tone seems to have darkened the lululemon community.  Brand loyalty is tenuous, buying habits are slowing even more, and interest in other brands is escalating quickly.  For many fans, a shift toward disappointment was set into motion months or even years ago, and with yet more problems being piled on, their steadily fading love of lululemon is finally reaching its natural end.

At the surface, lululemon seems utterly unperturbed by the fact that they are bleeding loyal fans of 5 and 10 years (or more).  Even though the diehards represent a tiny minority of lululemon customers, they represent immense purchasing power and social influence.

In his famous book, “Purple Cow”, marketing guru Seth Godin argues that a vital aspect to a business’ success is getting “sneezers” hooked on its product.  The sneezers are the early adopters, the true fans, the ones who will promote that business to anyone who will listen.  They “sneeze” an idea onto others, spreading it like a virus.  Those foundational fans are exactly the people that lululemon is losing rapidly, and they seem entirely indifferent to it.

Instead, lulu seems content to rest on their marketing laurels, coasting on the assumption that their position as an industry leader and their superior label recognition will keep them afloat.  They seem to assume that casual consumers will indefinitely view lululemon as special and irreplaceable, even as previously hardcore fans do not.

The fact of the matter is, at some point, the illusion will no longer hold.  As the allure of lululemon continues to fade for serious, seasoned customers, that erosion will eventually trickle down to other consumers as well.  This transition could easily be accelerated if the Next Big Thing starts to gain traction with the same “sneezers” that lululemon has left out in the cold.  Although their current strategies might provide short-term gain to satisfy shareholders, it leaves the long-term fate of lululemon in an extremely precarious and vulnerable position.

Am I saying that lululemon is doomed?  No, I think that’s premature.

If lululemon does slip from their throne, it won’t happen quickly.  Their empire has a very long way to fall before their fate is truly sealed.  They still have plenty of opportunity to recover, the question is: will they see the writing on the wall and change their course before it’s too late?