YogaSmoga had a big product drop today, debuting their new cozy knit winter fabric blend, Sona, as well as several new colors.  Sona–a blend YS developed themselves–is made of 75% silk, 20% wool, and 5% cashmere.  I’ve never seen such a high percentage of silk used in a knit by an athletic brand, so that seems like a new idea YS came up with.  I would imagine the silk makes for a very smooth and lightweight texture which is made more soft and plush (as opposed to slick like silk often is) by the wool and cashmere.  At 20% wool, it might bother those like myself who are sensitive to that fabric.  Unfortunately, using these rich fabrics without “fillers” like rayon makes for some very high price tags–brace yourselves for that.

If you live in or near Greenwich, CT or Brentwood, LA, you can check this stuff out in person at their new brick-and-mortar stores. 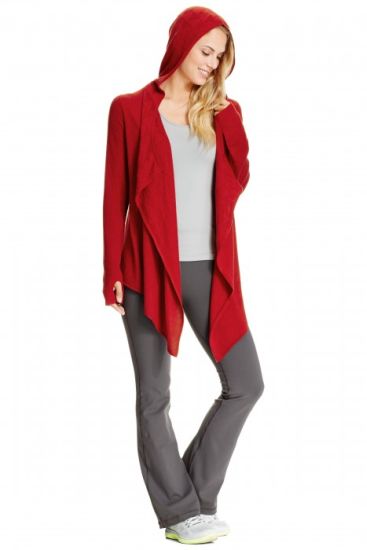 Two of the new sona knit items are wraps, including this rhapsody drape in the pretty new shade of red called rudhira.  The wrap comes in black and can be clasped close at the neck. 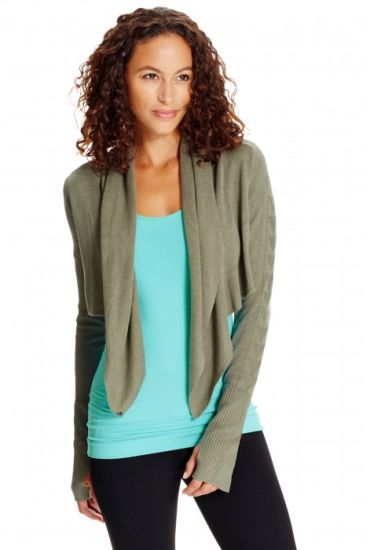 The other new wrap is the crop-length cuddle me wrap, shown in new color olivine.  This is my least favorite of the new colors. 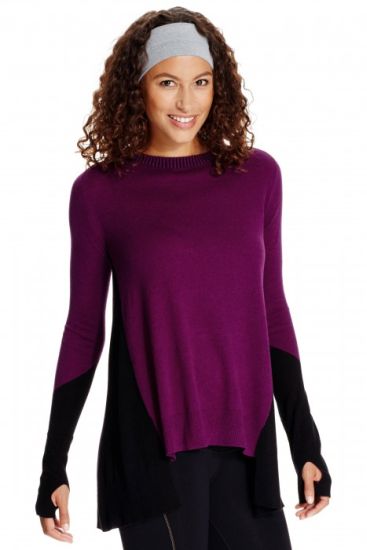 The verve pullover is a color-blocked high-low crewneck, shown here in the pretty new color viola. 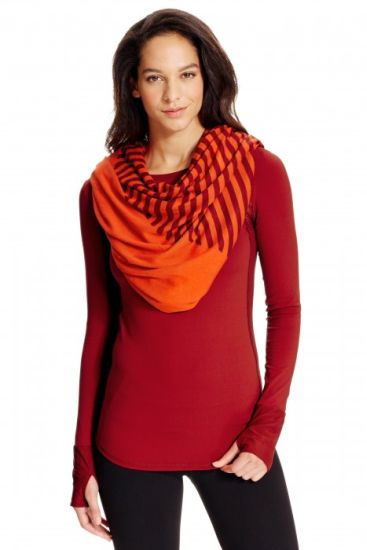 They put out 3 new scarves, including the pinnacle here, which mixes rhudira and new orange shade vermelho. 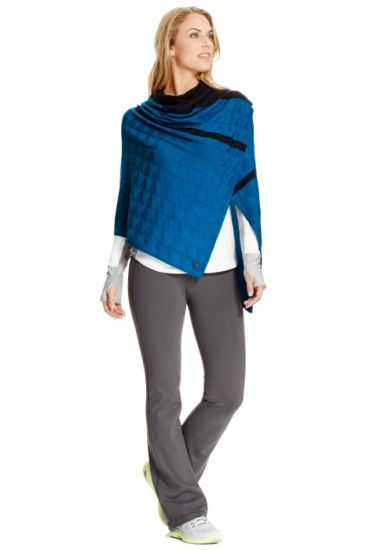 The breaker has a texture knit into the fabric and comes in this pretty new koel blue shade. 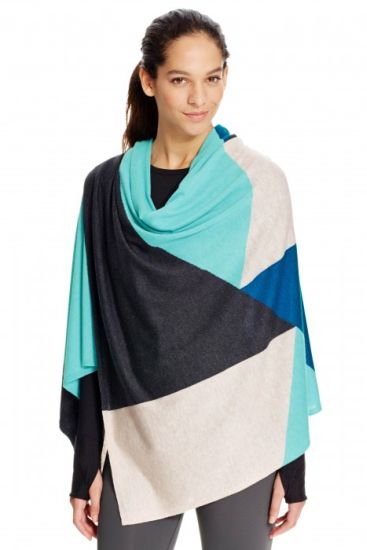 Last for scarves, the vertex is a triangle colorblock pattern–you can see the new andaman green here, alongside koel blue, charcoal, and oatmeal.  I think this one is my favorite out of the bunch.  There aren’t any dimensions listed, but it looks like the biggest. 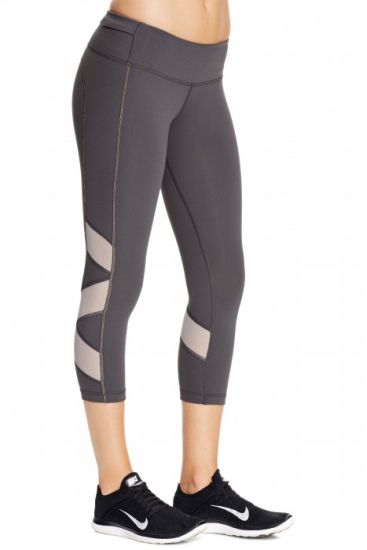 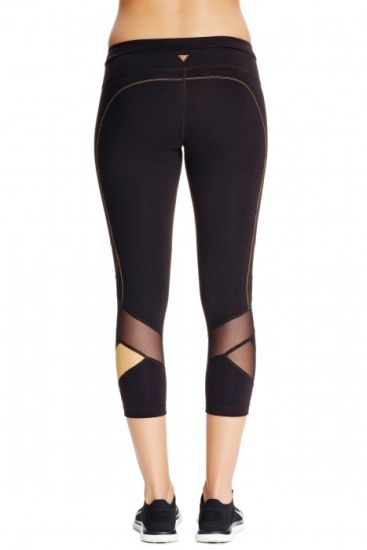 YogaSmoga also debuted their vivacity capsule, which is another addition to the mesh-inset crop trend   These new vivacity crops are made of aurum, which is their supplex blend (like luon).  The gold stitching and gold mesh panel add a touch of festive winter detail. 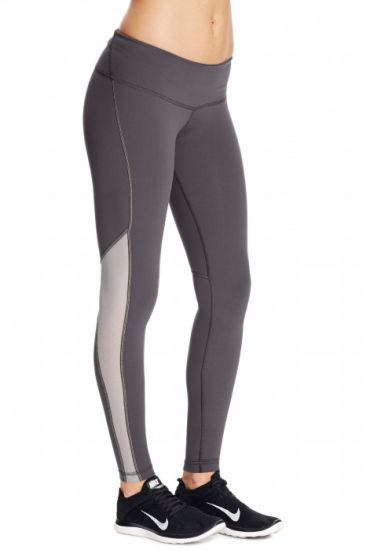 The vivacity legging is new, too.  Same story: aurum, gold stitching, mesh panels.  Both the leggings and crops come in black, grey caviar, and olivine.

This isn’t out yet, but pics show what looks like a new long sleeve (for running?) with mesh insets coming.  Other pics also show it in black and rhudira (red).  Presumably this is part of the vivacity capsule. 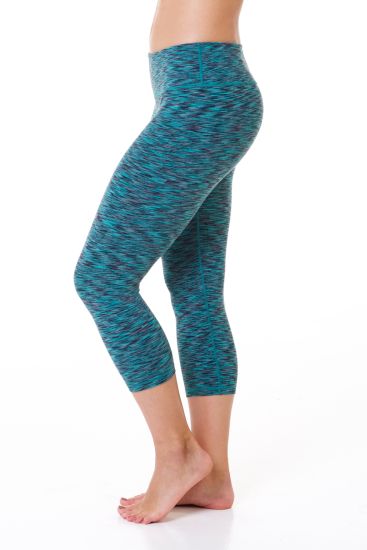 Glyder has released another of their infamous space dye mantra crops.  Jade space dye is their newest, which at first glance may look similar to the violet calypso space dye they released over the summer, but the jade has much stronger green tones.  It’s very reminiscent of lulu’s older and highly coveted teal zeal space dye.  You can snag Glyder’s crops for $56, available in sizes XXS-XL.  I’ve heard lots of good things about their space dye crops. 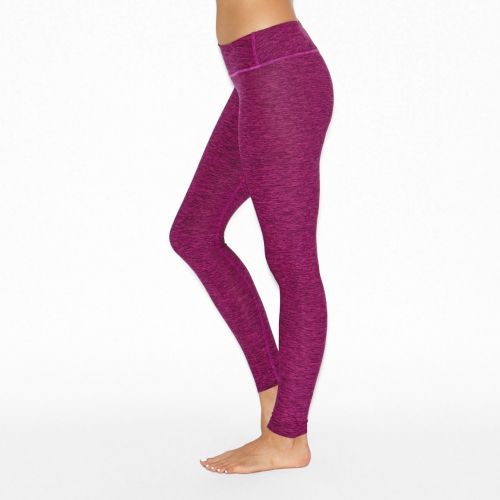 These new pink flame/black salt and pepper leggings are a notable addition.  Salt and pepper is essentially BY’s version of space dye.  This color scheme looks particularly nice (the black/electric violet shade is pretty too, although that’s not new as of today).