This week’s edition of what we love has quite a few new and exciting goods (though not necessarily both!) from lulu.  Here’s what’s on the docket for next Tuesday’s upload: 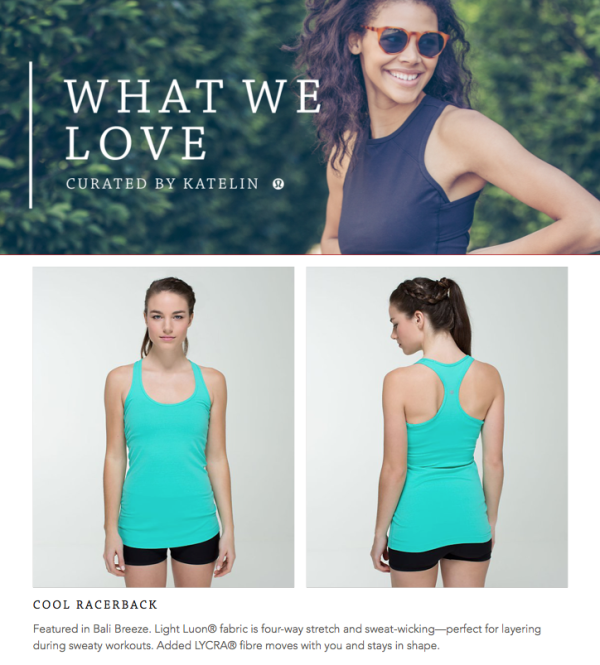 The bali breeze cool racerback!  Yassssss.  I know some people–myself included–were worried it might not come to North America since it was released last spring here.  I’m so stoked to see it coming our way!  Since I (foolishly) didn’t get one last year, I’m definitely scooping one up this time around. 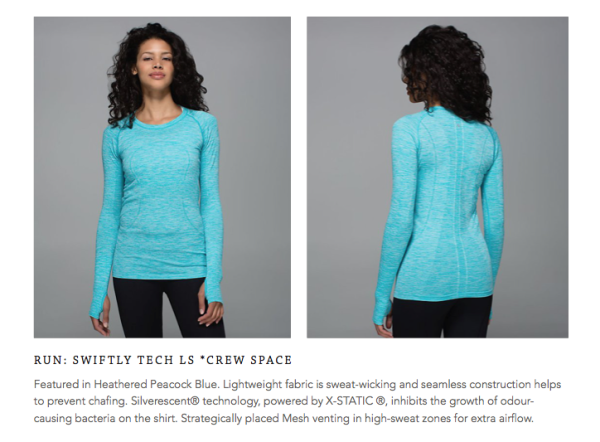 Speaking of gorgeous colors, this peacock blue space dye swiftly is amazing.  Of course, it’s not exactly the season for long sleeves but I love it anyway!  Peacock looks a bit like blue tropics and fresco blue had a baby.  I don’t buy many swiftlies, but I may cave on this one. 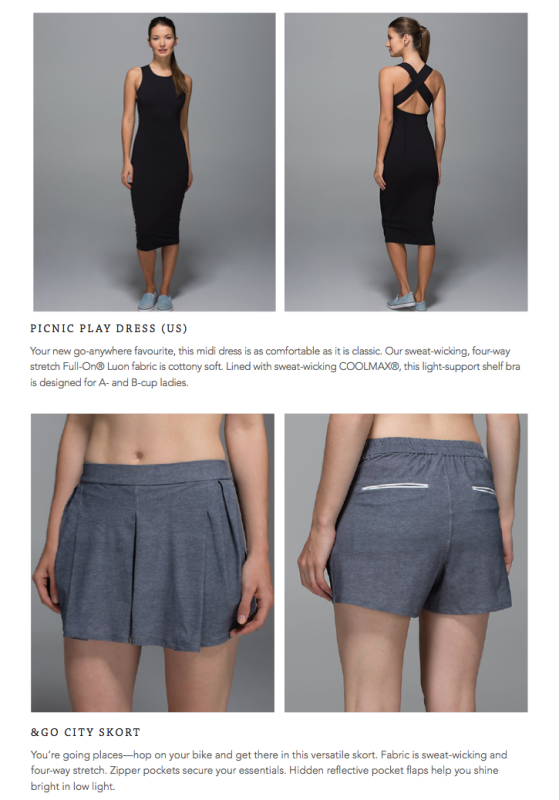 &go is back next week.  I was wondering where those capsules have been since they were playing them up soooo much not too long ago.  The picnic play dress is a slightly different spin on lulu’s dresses so far, since this one actually has a built-in shelf bra.  The addition of the bra makes sense since this one has more of an open back.  The black looks almost stuffy (especially from the front), but a color in this might be quite nice (or just some strategic accessories).  Also, the new city skort, which has been overseas for a couple weeks, is actually an &go item.  This is by far my least favorite item this week.  And in case you were wondering, it also apparently comes in floral sport, which really brings this piece home into “things that make Suzanne go ick” territory. 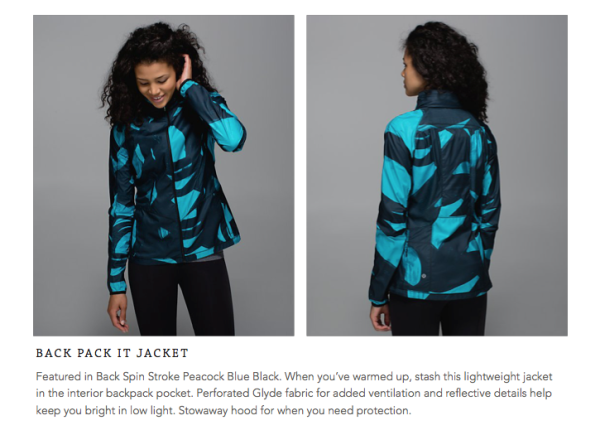 Anyways, this new back pack it jacket is doubly new.  First, the style itself hasn’t been seen yet, and the peacock version of back spin stroke is new also.  Apparently, this has some sort of backpack pocket?  I’m not really sure what that will mean in practice, but I’m intrigued.  I like that the jacket appears to have a little bit of shape to it, unlike a lot of other jackets lately.  Also, it’s made of glyde, so it’ll be lightly weather resistant. 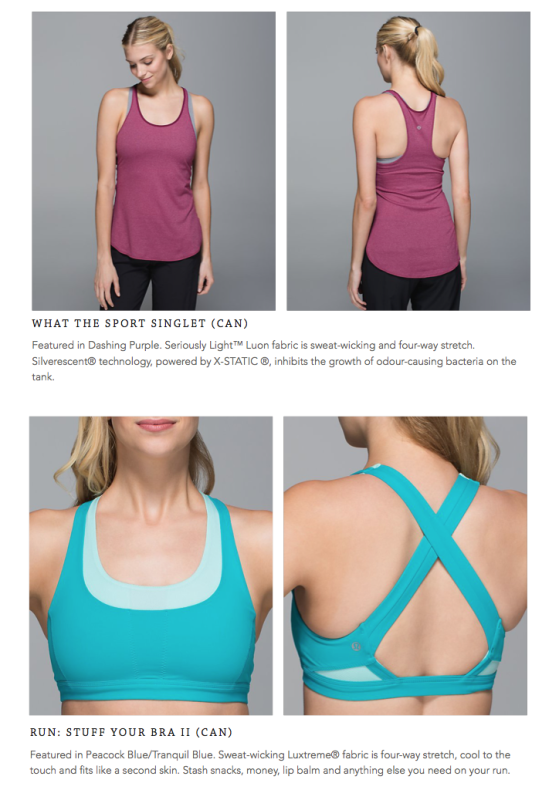 The Canadians are getting a dashing purple what the sport singlet this week.  This color looks pretty nice on the singlet.  Also, Canadians get to have all the fun with the peacock blue/tranquil blue stuff your bra.  Since I’m already planning to snag a BB CRB, the US having to wait will space out my orders a little bit, which maybe isn’t such a bad thing. 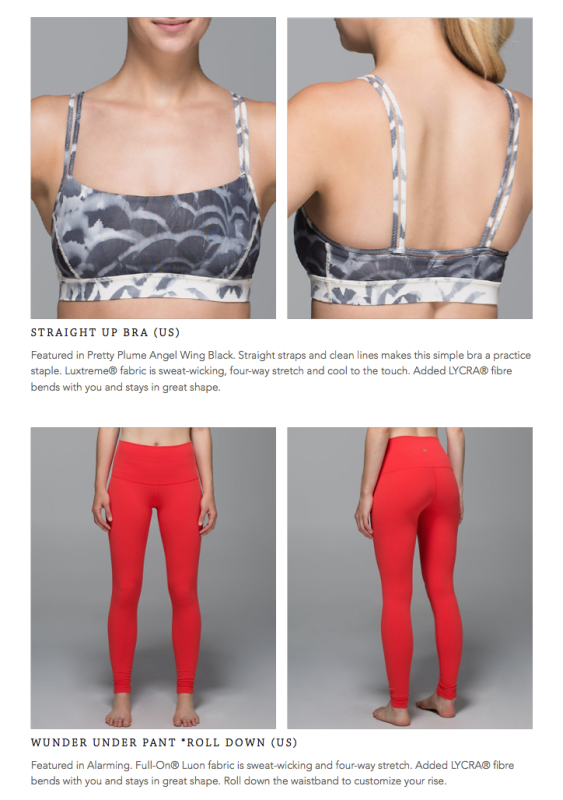 On the US side of things, we’ll be getting a straight up bra in a new print, pretty plume angel wing.  More on that in a sec.  There will also be some major alarming action happening in the form of new rolldown wunder under pants.  Looks like these will be regular, single-layer luon, unlike the grapefruit and bali WUs of late.

Speaking of pretty plume, I saw on Facebook yesterday that the UK got a sneaky upload of new pretty plume rolldown wunder under pants (edit: you can no longer see them on this link–they’re sold out!).  I don’t know when this is coming to North America (I’m just gonna assume it will), but while I’m on the topic of posting previews tonight, feast your eyes on this: 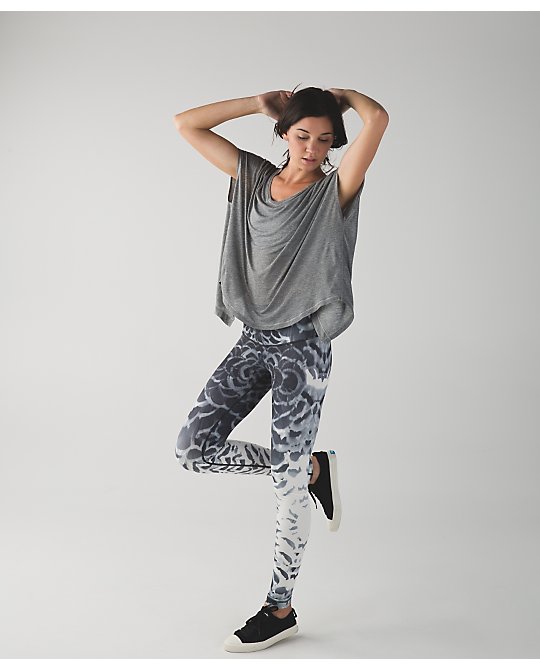 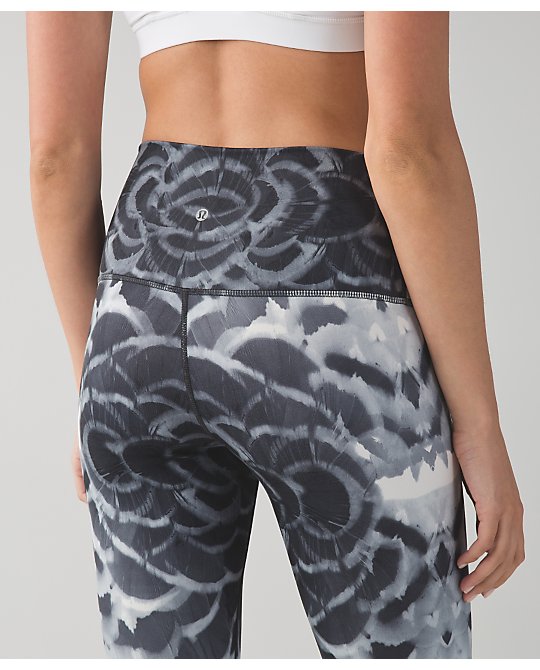 They’re already getting lots of love (and are almost completely sold through already in the UK!).  At the risk of sounding like a broken record: I’d love some speed shorts in this pattern. ;)