Since Katelin has taken over Britt’s picks, I’m loving that she’s posting earlier on Thursday nights–this week’s is already up.  Plus, she’s super-responsive to questions in the comments thread and gives real answers, which is really awesome.  Overall, 5 stars.

She mentions in the text that there may be a black cherry define jacket coming.  She emphasized that she’s not making promises but it’s a possibility.

She also mentioned that the moody mirage bark berry energy bra (from the product banner I spotted the other day) is dropping in the US this upcoming week, but won’t be in Canada til later.

On to the pics: 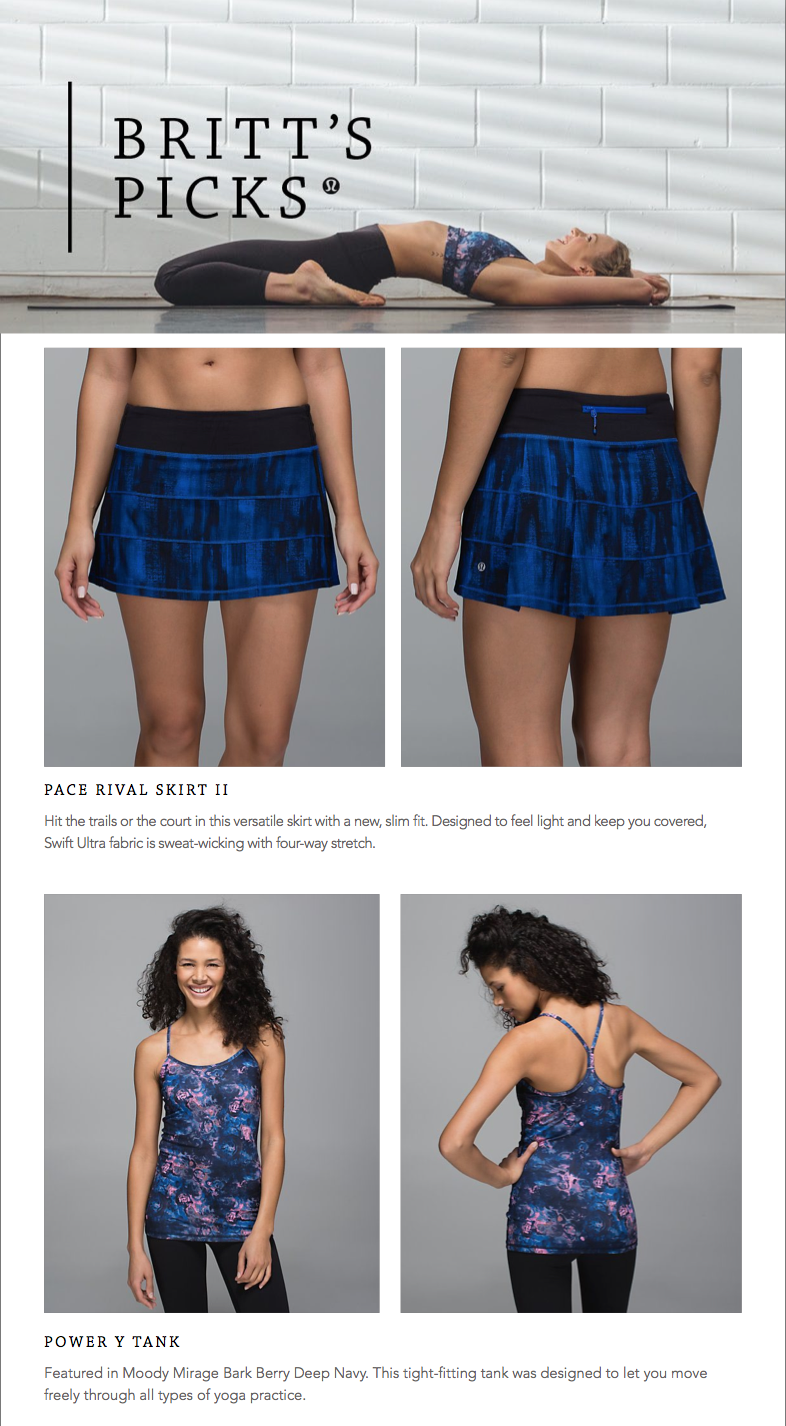 The pace rival skirt is coming back–looks like it’s updated since it’s now called the pace rival ii.  In the previous version, it was pleated in both the front and back, but to my eye it appears this new version is only pleated in the back.  It’s coming in the nightsky harbor blue print.

A power y tank is coming next week in moody mirage bark berry.  This is a little bit of a better look at this new pattern than the little bra previews on the energy bra and FTBW. 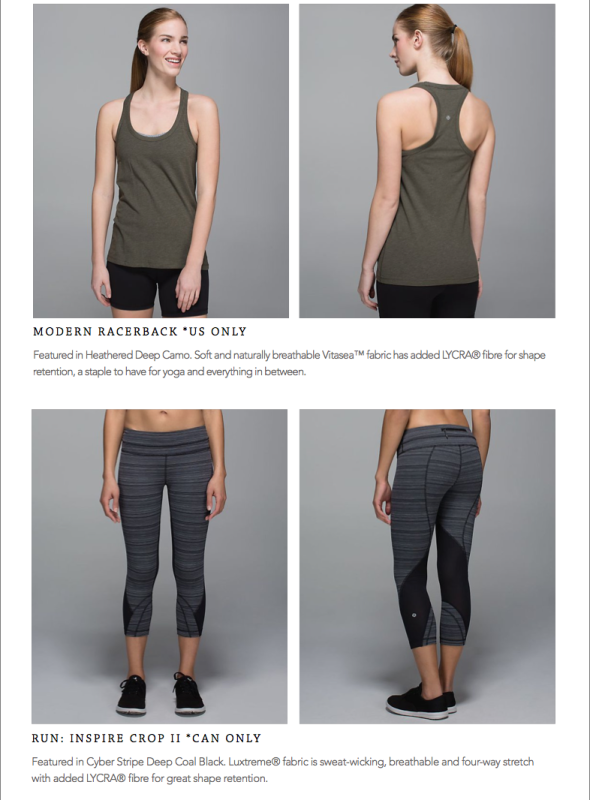 The modern racerback, i.e. the vitasea version of the CRB (ish), is coming in deep camo.

These new cyber stripe inspires are sure to be popular, as I said last week when these popped up overseas.  Lots of people are hoping it will come in wunder unders–perhaps Katelin will have insight on this in the comments section. 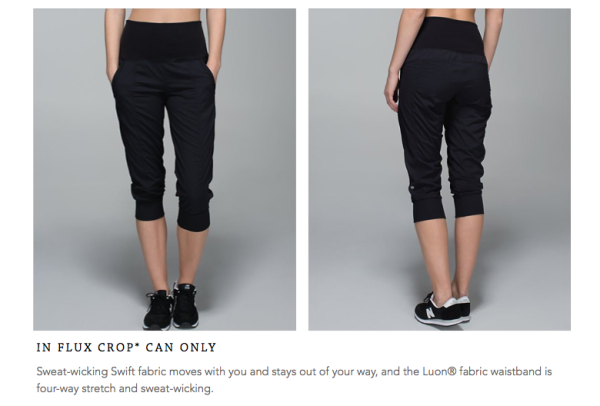 These new in flux crops are made of swift, like studio pants.  These could actually be cute on a lot of people since the fit looks like it’s the right amount of bagginess without looking sloppy.  I’ll be interested to see more of these, especially how they turn out on shorties. 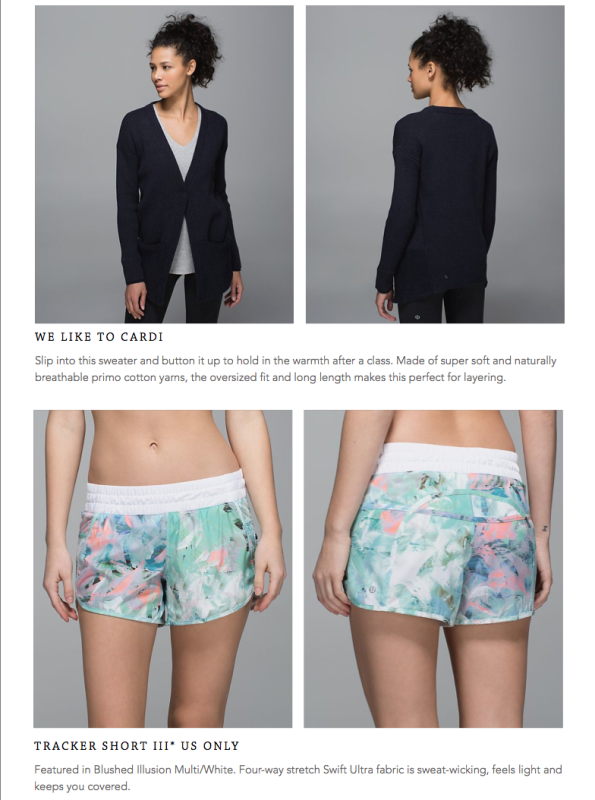 The we like to cardi looks like a slightly smarter version of its pun cousin, the cardi all day–more of a slim fit, and shorter in the back although still butt-covering.  Another one I’ll be interested to see more pics of.  This one’s actually made of cotton instead of merino. 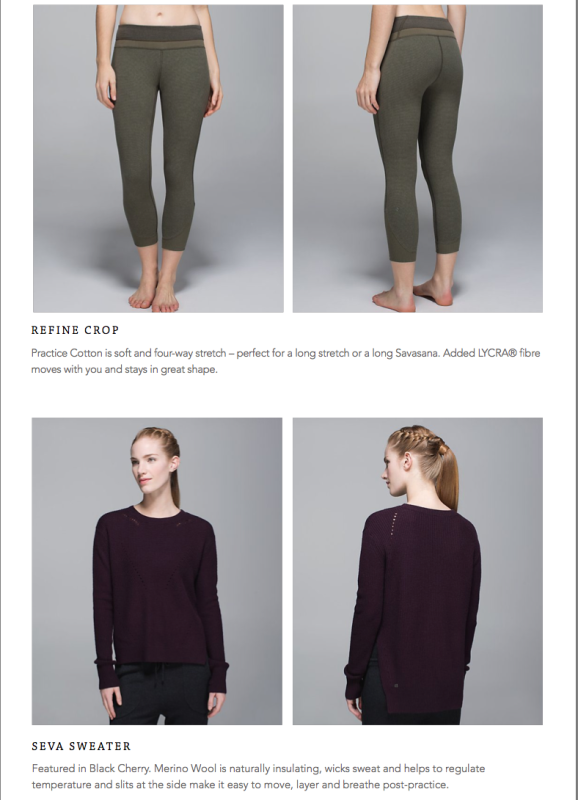 The refine crops are another cotton crop (like the motivate crops were), but with a more simple design.  The waistband looks a bit groove pants-y.  This looks like deep camo, maybe, or one of the other varieties of the green-ish earth tones that are out right now.

Lastly: new seva sweater in black cherry.  This looks like it has the potential to be what the yin to you sweater was not.  It has a drop hem and slits, but it looks like it might be considerably less awkward and loinclothy vs the yin to you.  This one is merino too and has some of the open stitching details that have popped up on a few sweaters lately.

Overall, no must-haves for me this week, but a few items that have potential to be winners in a general sense.