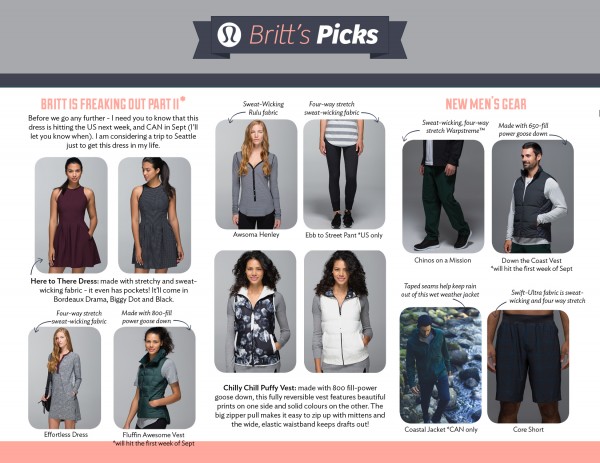 Almost completely forgot about Britt’s picks this week–I blame SeaWheeze.  Thanks for a regular reader for the friendly nudge.  D’oh.

As seen in a store earlier today, here to there dress is finally coming!  And in bordeaux!  SWOON.  Also, the color we saw pics of today is not diamond dot, but “biggy dot”, whatever that means.  Note that Canada will be behind the US and won’t be getting the dress til Sept, although the US will be getting it next week.  But September is almost here, so realistically, probably only a 1ish week difference.  Don’t fret, Canadians!

The chilly chill vest seen in Australia will be reaching North America next week, followed by the fluffin’ awesome capsule in September.  Fuel green!!  I think I need to wear that vest outside a cabin in the woods with a knit hat, lace-up leather boots, and a mug of hot tea around a fire.  Yes. (Idk guys, it’s just where my brain went.  I did an unholy number of burpee box jump overs earlier, so things kinda got weird after that.)

The dress from the fall sneak peek looks like the effortless dress–pretty sure that’s the plush petal print.

Also, the ebb to street pants will make it to the US–they’re already in Canada.

All in all, this week looks a little more interesting than last week.  Mostly, I’m lusting after that bordeaux dress big time…