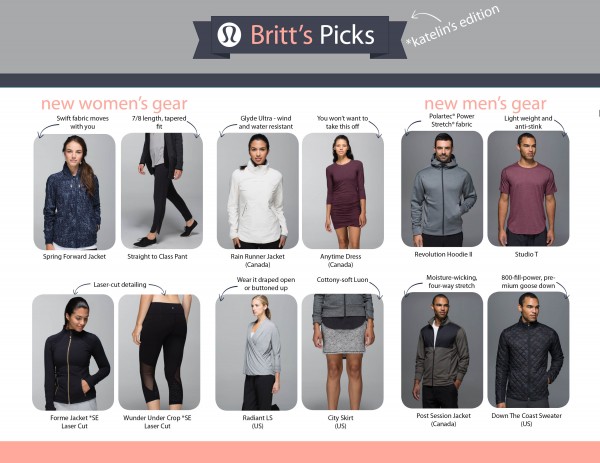 Britt’s picks this week is technically not Britt’s, it’s Katelin’s picks, since Britt is currently away.  Here’s the scoop on what’s coming out next week:

The forme jacket and wunder under crops will be jazzed up with laser cut details, and the WUC gets mesh, too.  The gold zipper on the forme is a nice touch.  The laser cut details on the WUC totally look like the cutouts on these metal insets on this cabinet we had in my house when I was a kid–like so.

The straight to class pants look like a nice change of pace from the baggy pants of late.  I’ll be interested to see more pics of these.

The city skirt will be coming to the US–it already is uploaded on the Canada side.

The spring forward jacket, which has been in stores for a while, will make it to the website.

Two new pieces that look like they’re made of vitasea: the radiant LS, which looks similar to the iconic wrap but apparently has buttons, and the anytime dress ( just kidding, Katelin says it’s heathered bordeaux, and will also be coming in inkwell), which looks like it might be a 3/4 sleeve version of the in the flow dress.  I’ve seen lots of pieces like this from non-athleticwear brands, so I’ll be interested to see how lulu’s price point compares.  I wish the dress had a slight scoop at the neckline but hooray that it comes in at least one non-neutral color!

Also: kudos to Katelin, looks like there are no typos this week! ;)