Time for another week of Britt’s picks: 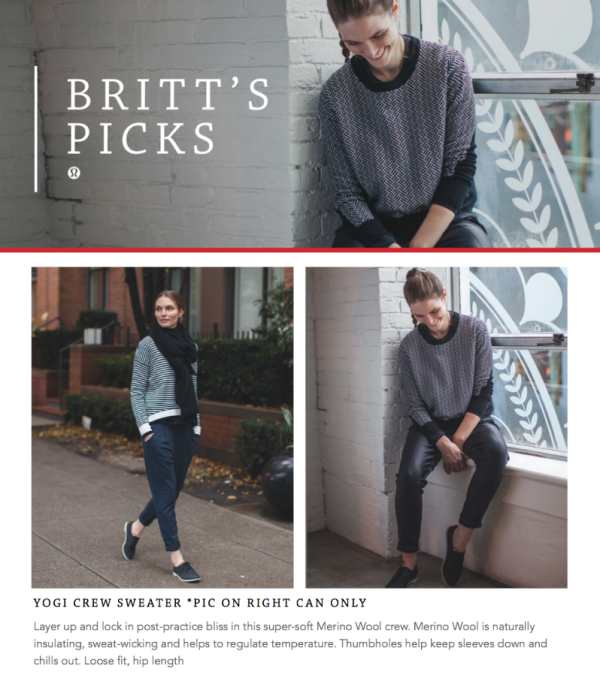 More colors of the yogi crew!  I wonder what those pants are in the right pic–some kind of pleather pants to come?  Btw, these colors are already up on the UK side, plus a 3rd not shown in Britt’s picks: 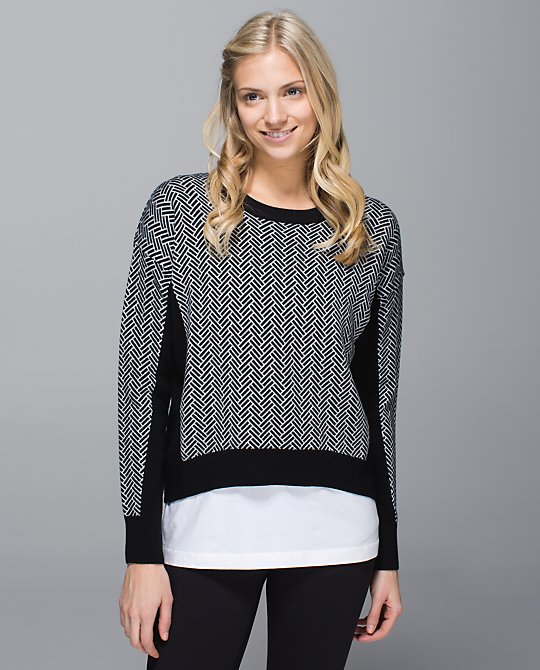 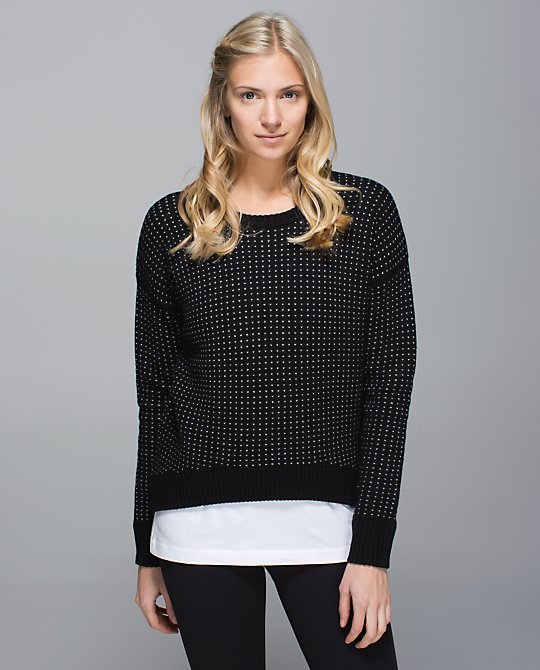 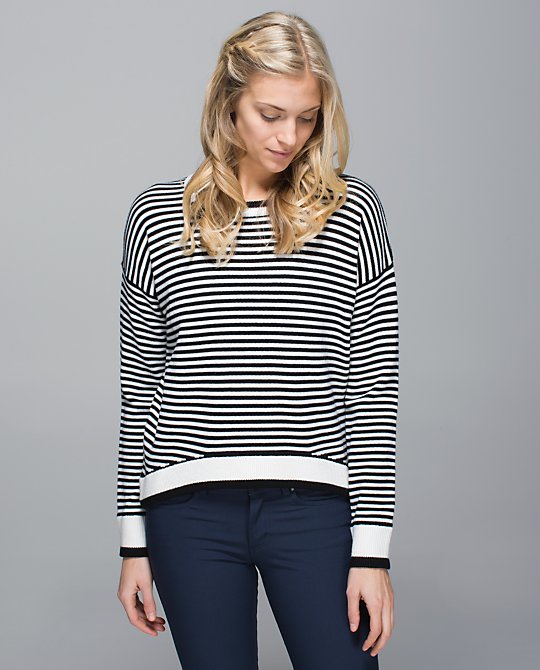 Click through the pictures to go to the product page if you want to see more pics.

(Note: I didn’t post about UK/HK uploads this week partially because I was thrown off by the break in the upload routine this week, and then when I did remember, there wasn’t really anything earth-shattering.  So there you go.) 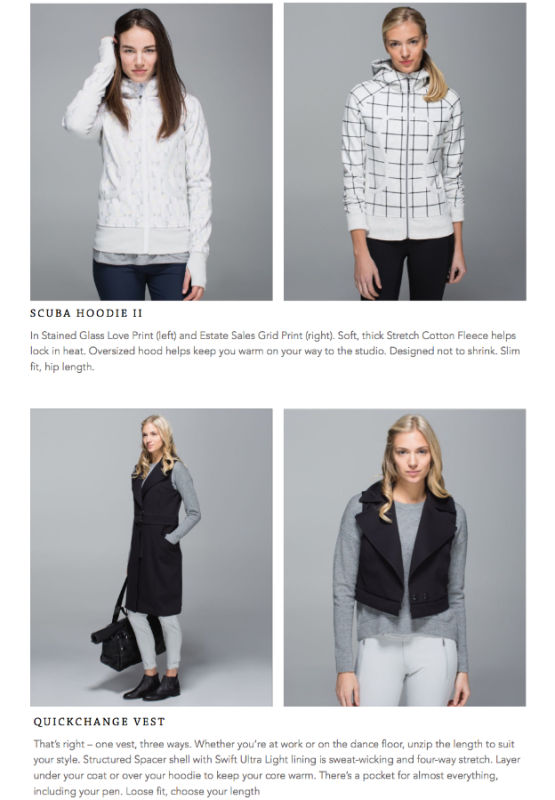 More scuba hoodies coming: I’m pretty sure the stained glass love white has been seen before somewhere–or at least it looks familiar to me–but estate sales grid print is new.  Which is a bizarre name.

There’s also a new quickchange vest, which looks kind of weird and confusing.  Sort of like the long and short of it jacket and the blazer vest had a baby.  At least it looks like the zipper is covered, which makes it look a bit more normal. 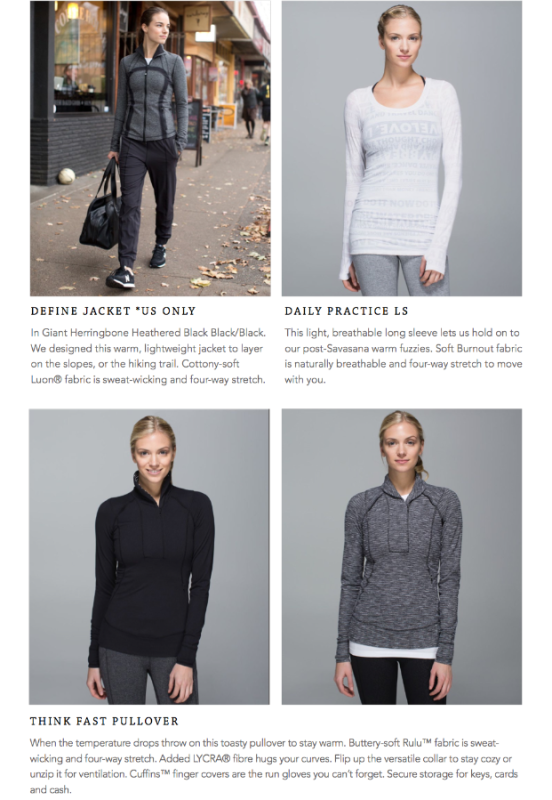 The US will finally get the giant herringbone define next week–I know quite a few people were waiting for that.

The daily practice LS is a burnout scoopneck and coming in at least white manifesto.  I like the shape so I’d be interested in seeing other colors.  I absolutely detest the manifesto print on anything.

The think fast 1/2 zip pullover is coming in solid black and coco pique.  Would’ve rather seen another color, but oh well.

Of note, there is no mention of the think fast hoodie in here. 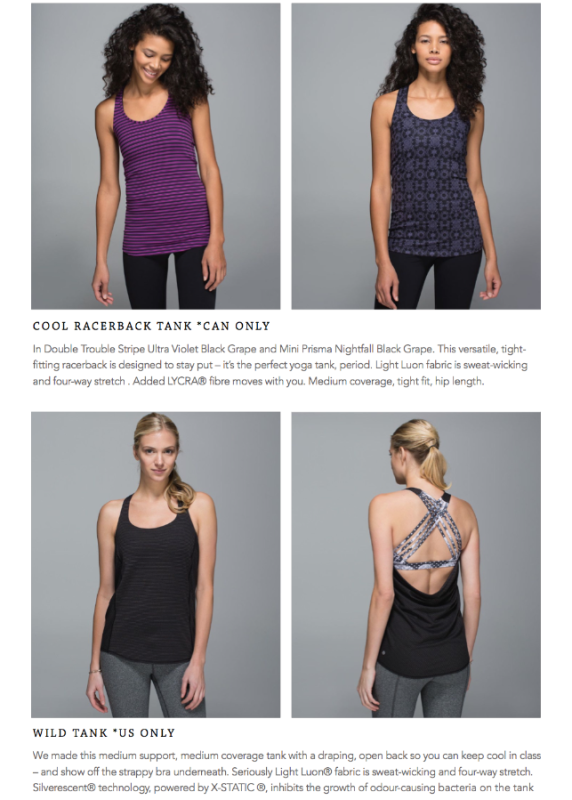 I first saw this post on mobile, and I got excited because the CRB looked like a solid.  Nope.  It’s just the double trouble stripe black grape/ultra violet cool racerback.  This and the mini prisma have both been seen before.

Only the US will be getting the dottie dream rose print wild tank.  Not sure if this means the US will also see the other two colors that are out–capilano stripe and neutral blush.  I’m interested in trying out this tank, and I think this is my favorite of the 3 so far. 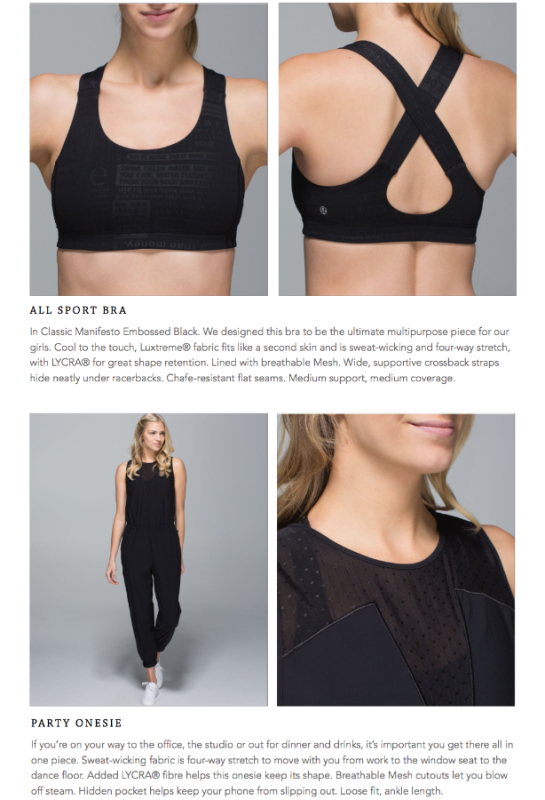 More manifesto in the form of an all sport bra.

Also, the party onesie.  Not as offensive in black, but…still a onesie, and I just can’t get behind that. 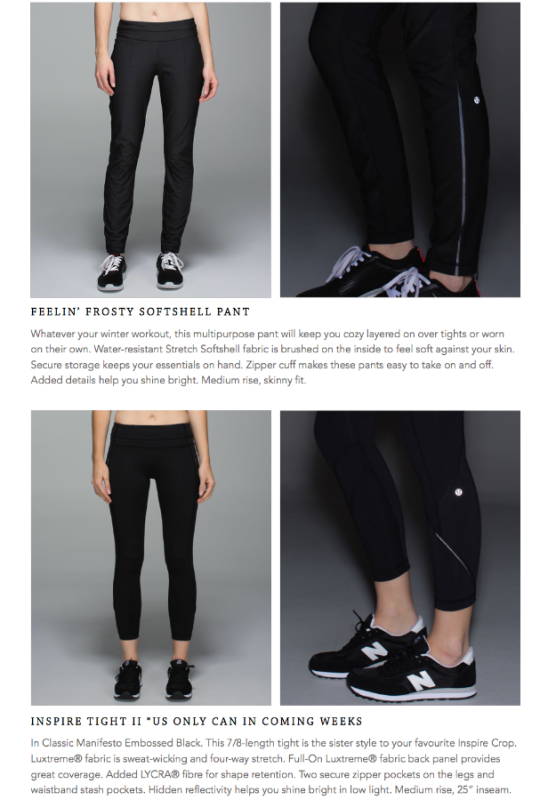 The feelin’ frosty softshell pants will make it online next week.  A couple of us in the comments the other day were wondering why they added the ankle zipper, and apparently it’s for making it easier to get on and off.  Whatever, shorty haters.

Inspire tights are coming next week.  At 25″, these are quite a bit longer than the usual inspire length of 21.5″.  Both runday crops and rebel runners are only 23″, fyi, and those are already pants on shorties like me. 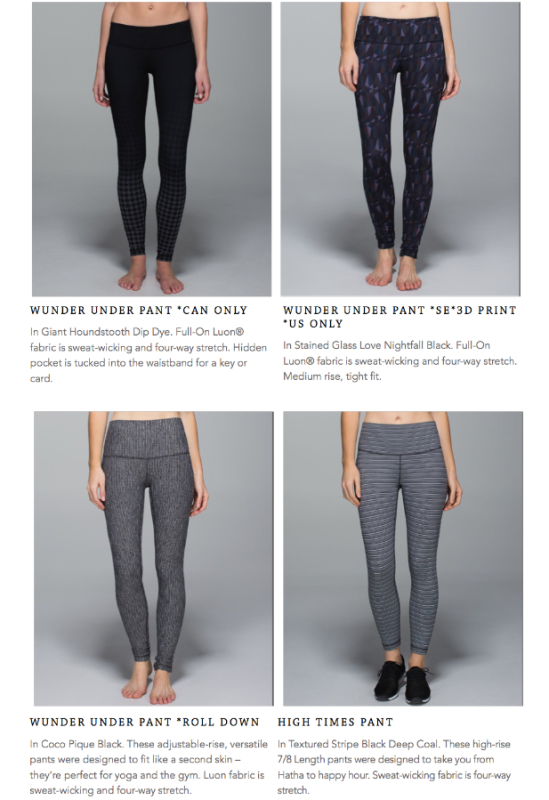 Wunder unders galore.  The houndstooth dip dye are an interesting concept–as I think I’ve mentioned before, I’m glad to see lulu branching out and experimenting with geometric stuff, not just the umpteenth floral.  The stained glass love WUP are apparently one of those 3d edition thingies–I’m fairly certain these are already in some stores, and I’m fairly certain these have a seam down the outside of the leg, unlike most WUs which do not.

On the high-rise front, yet another coco pique variation in the form of rolldown WUP.  For those of you who may be wishing you got WUP instead of the high times last week, take note that this version appears to be vertically oriented, which I happen to think doesn’t look as good.  Also, new print on the high times pant called textured stripe deep coal. 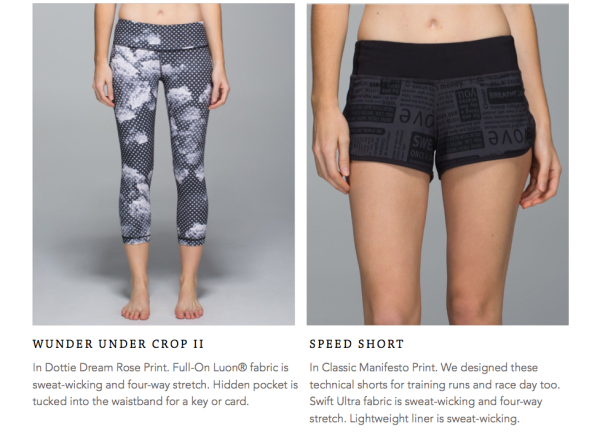 And in crop land, wunder under crops are coming in dottie dream rose.  These are marked as full-on luon AND they’re a print, which probably means they’re going to be polyester, which generally means they feel nasty and are sheer.  I have low expectations for these, although I do kind of like the print.

Lastly, manifesto speed shorts coming.  This will definitely require some pattern cherry-picking unless you want precisely the wrong thing stamped on your butt.  As I said before, I hate all things manifesto so this is one pair of speeds I can very easily pass on.

Overall, very easy week for me.  I’m vaguely interested in the herringbone define and wild tank, but that’s pretty much it.

Also, no gratitude wraps mentioned here.  Not sure if that means anything one way or another.