This week’s what we love is here!  In case you missed it, remember that WWL is now posted on HeyLululemon on Fridays instead of Thursdays as it was previously. 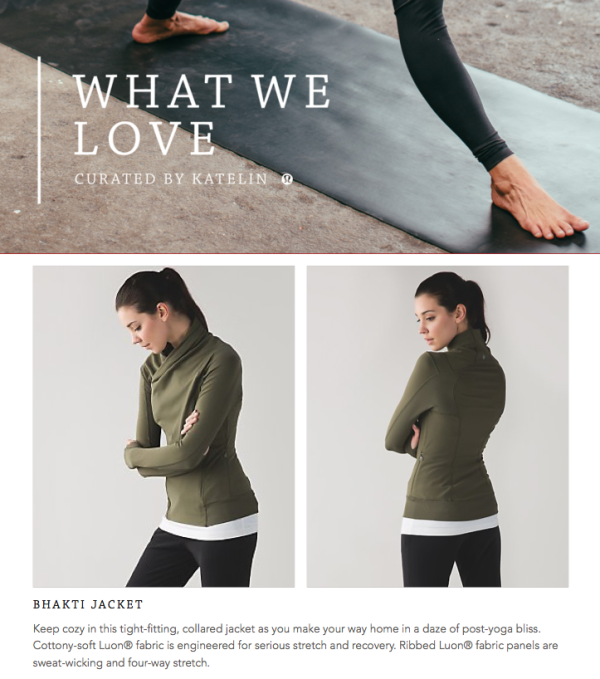 The bhakti jacket is back again, this time in fatigue green.  This one popped up overseas this week, and I’m curious if we’ll see it in other fall colors like sapphire blue or cranberry. 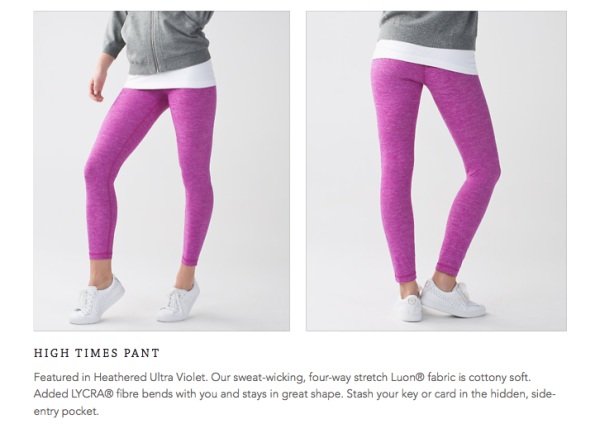 Ultra violet is returning on some heathered high times pants.  These look super cute, and the light and bright photography does them a lot of favors.  But, if the heathered jeweled magenta wunder unders are any indication, these will probably be sheer.

In the comments, Katelin said UV will show up in a “couple pieces” this fall, so that sounds to me like it will be spotty.  This makes sense given that UV has reappeared multiple times over the last few seasons, so it would be a little redundant for it to be brought back in a larger number of items. 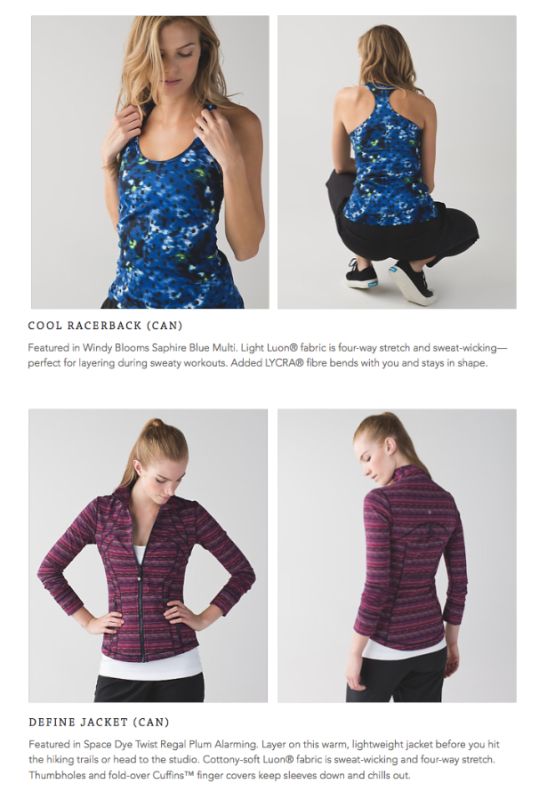 New prints coming for September!  First up, windy blooms.  I like the color scheme but the pattern doesn’t do much for me.  Printed cool racerbacks aren’t my favorite either.  I’m solidly “meh” oh this one.  Another new (or semi-new) pattern is space dye twist regal plum/alarming on a define jacket.  I think I’d like it better if they’d mixed regal plum with a darker shade of purple, but it’s still decently nice-looking.  Also, looks like the stripes line up on either side of the zipper. 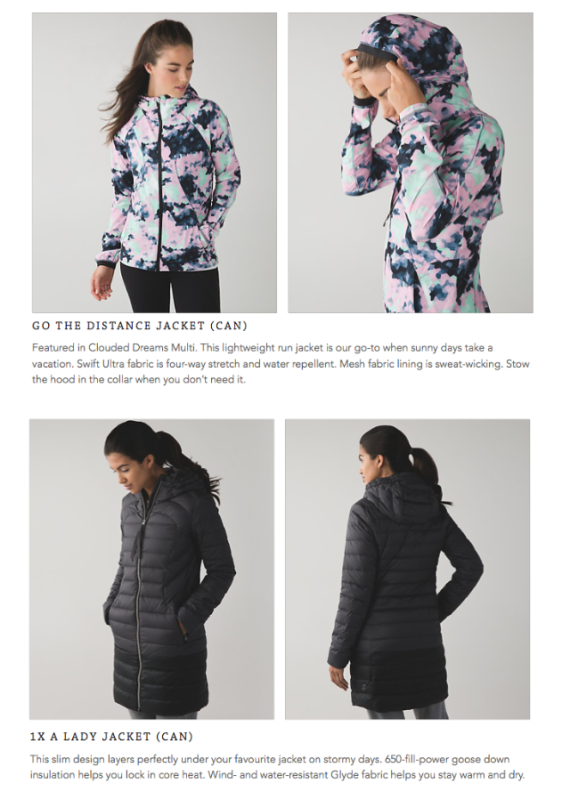 The print names this month seem to be weather-themed: the next one on the docket is clouded dreams.  It mixes baby pink with a soft mint and navy.  Since this is coming on the go the distance jacket, I wonder if lulu is finally done with miss misty jackets, at least for now.  Also, continuing with the theme of Canada getting the cold weather stuff a little earlier, they’ll be getting the return of the 1x a lady jacket.  Last year this came in 1 or 2 seasonal colors (e.g., alberta lake) so I’m guessing something non-neutral will show up again. 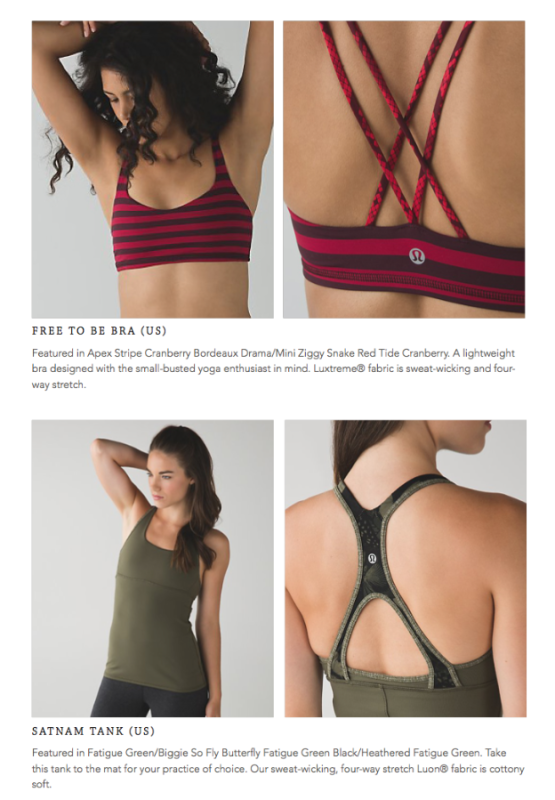 Moving over to the US side, there’s a cranberry/bordeaux drama stripe free to be bra that Katelin mentions will most likely *not* be dropping in Canada.  Everything else in this post she said should be in both regions sooner or later, but that doesn’t seem to be the case for this bra.  If there are Canadians out there who desperately want this color, consider this your fair warning.  Also, the new satnam tank style is coming out this week in fatigue.  You might remember seeing it overseas this week in white. 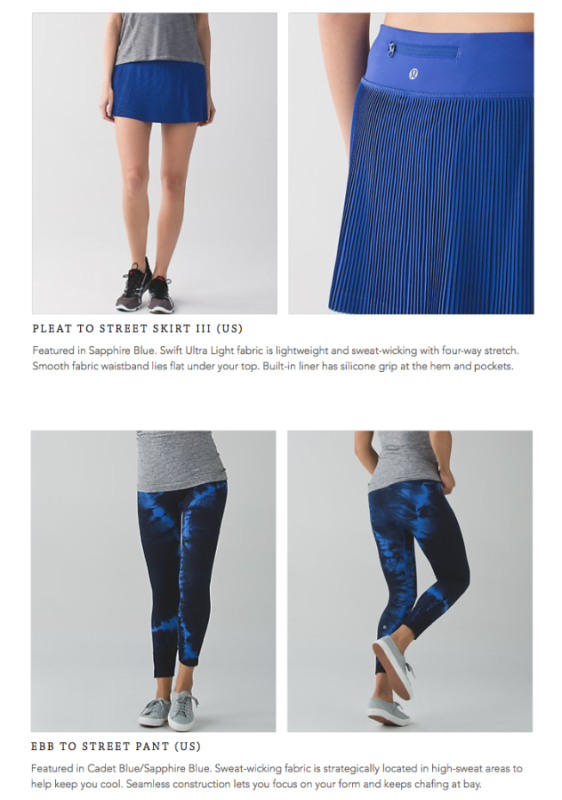 Lastly, here are some blue goodies to round out the list.  A nice solid sapphire blue is coming for pleat to street lovers, and we’ll finally be seeing the tie dye ebb to street pants, at least in cadet/sapphire.  Lulu still “owes us” the blue tie dye in the flows and the red tie dye ebb to streets (pics in this post), so be on the lookout this week if those are on your wishlist.