Another week of Britt’s picks is up, you can find the original thread here.

[Side note: I know this is coming to you a bit later than usual and in general things have been spottier than usual the past couple days.  I’m stricken by a Terrible Awful Plague and am trying to take advantage of the few moments I have where sitting up and using my brain at the same time doesn’t make me wish for death.] 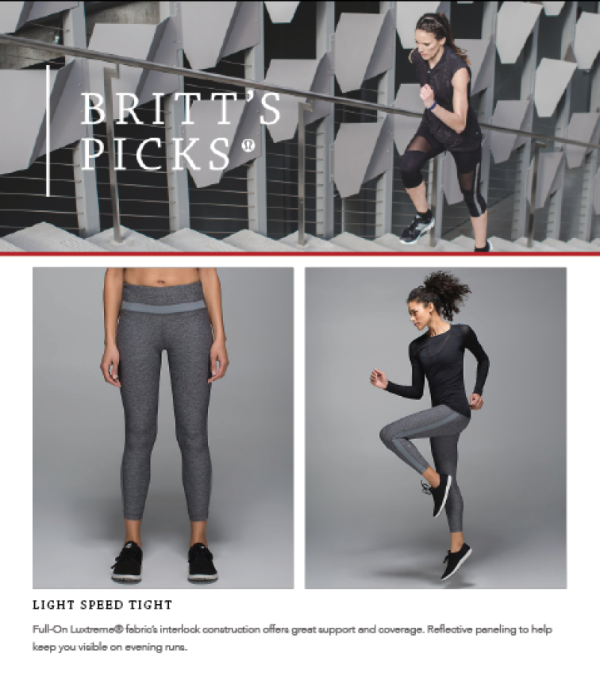 Some new running stuff coming, including the light speed tight.  I see you, double entendre.  These look a lot like inspire tights with an accent down the side instead.

(I know some of these pics are a bit pixelated.  They’re that way in the originals. :\) 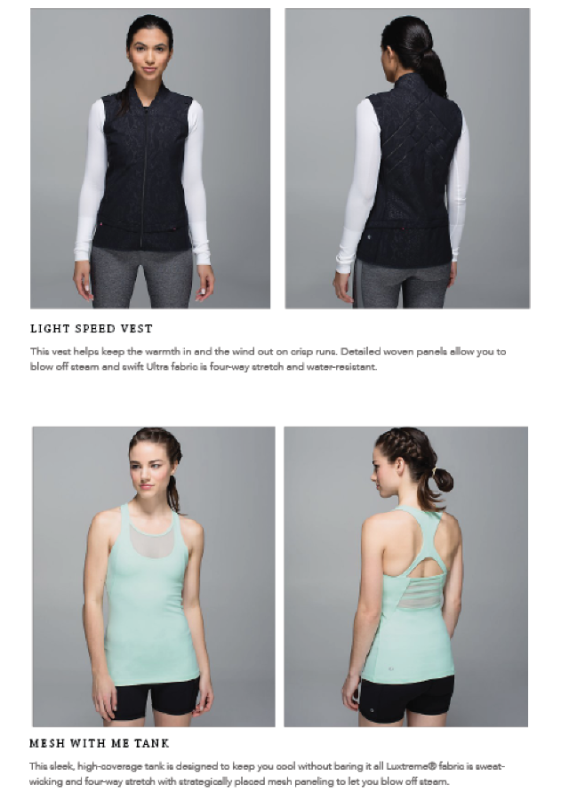 The light speed vest looks like the patterned thing from the spring sneak peek video.  The pattern isn’t clear here since the image is so low res.  Looks like the mesh with me tank will also be coming in sea mist. 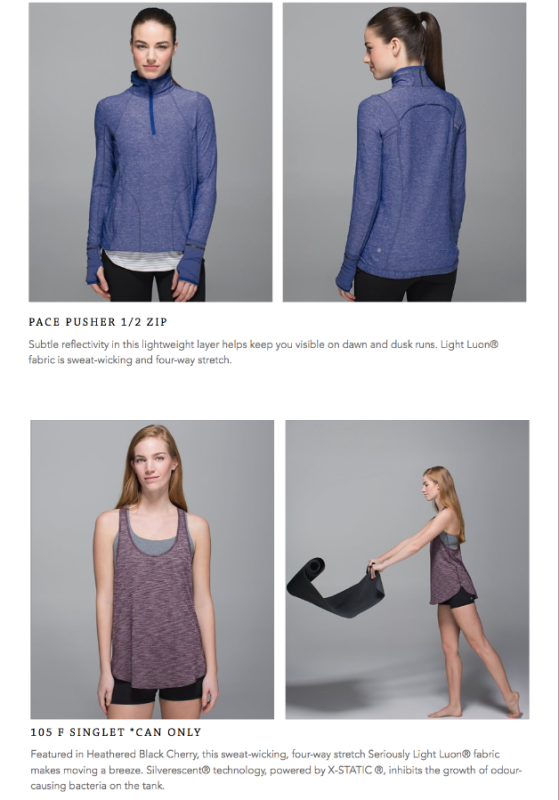 The pace pusher 1/2 zip was  uploaded in Australia this week–the color pictured is heathered harbor blue.  The black cherry 105F singlet is new too–very pretty in this color.  There seem to be more and more 105F’s with a space dye texture like this. 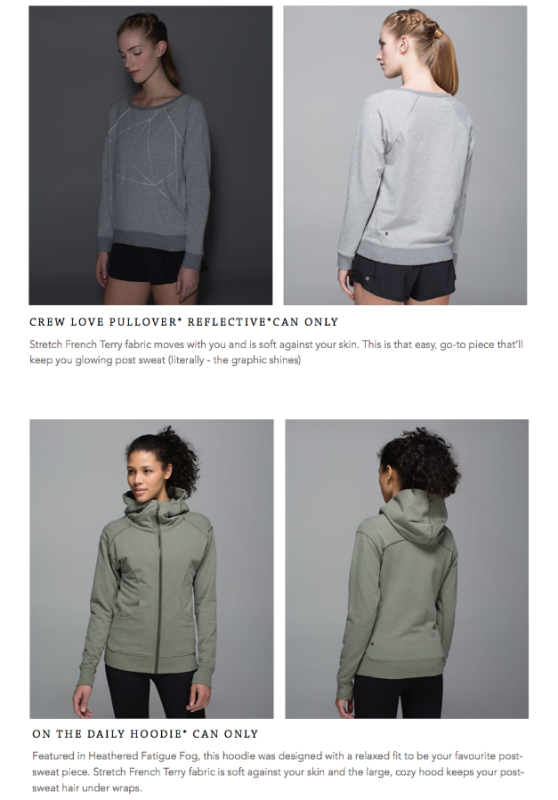 More things coming that were spotted overseas: the crew love pullover popped up this week, and the on the daily hoodie appeared last week.  The high neck looks extra warm on the hoodie. 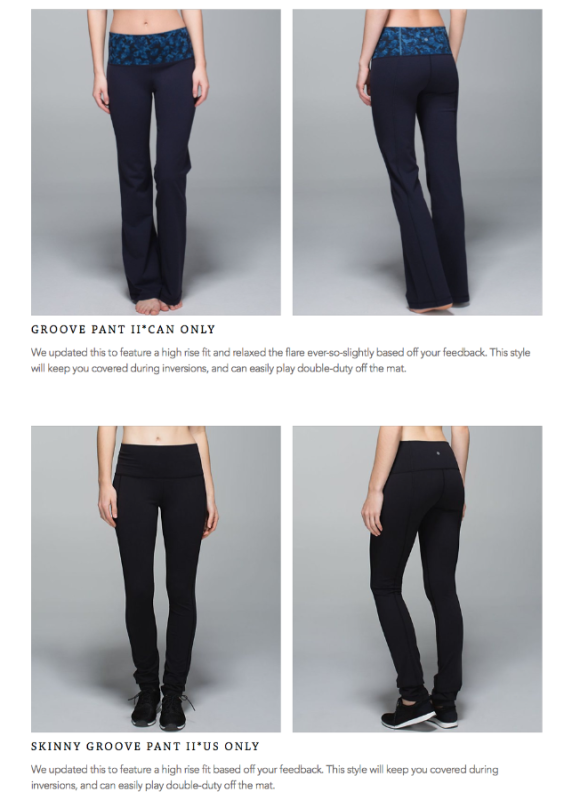 Some staples were redesigned for spring: both the groove and skinny groove got a literal lift with the addition of a higher waist.  I wonder if that means they’ll be $10 more expensive, like the rolldown WUs.  Not sure if you’ll actually be able to roll these down like the WUs or if they’re more of a “fixed” high rise like the high times.  The grooves are also noted to have a slightly different silhouette.  The flare was toned down a bit, which is a good move since a dramatic flare is getting a bit dated.  The knee was also relaxed significantly.  They kind of look like the leg of astro pants now. 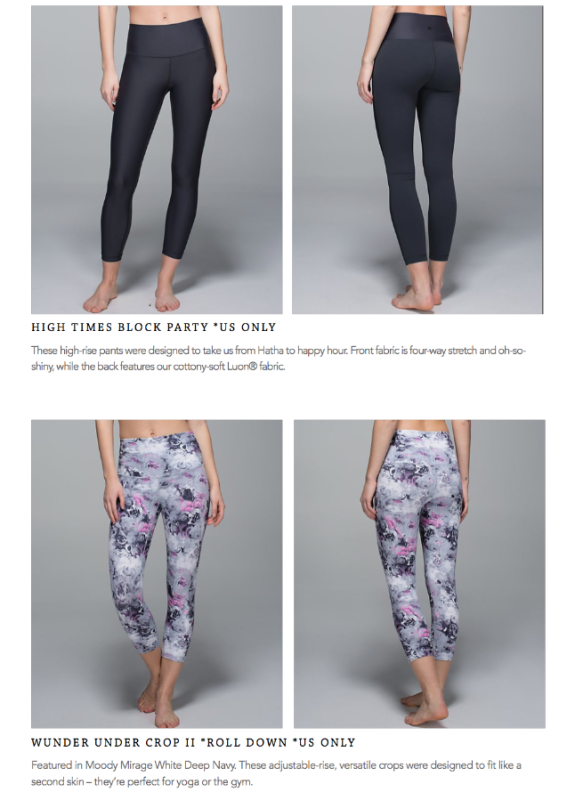 Speaking of high rises, the high times pants in block party (seen in stores the other day) are uploading to Canada.  Wondering if this fabric will look cheap in real life.  Also, the anticipated moody mirage WUC are finally uploading, but US only for now.