The second week of fall is coming at us, and Katelin served us a whole bunch of new previews on this week’s What We Love.  You’ll notice this is being posted on Friday again, instead of Thursday.  There’s currently a poll on heylululemon about whether WWL should be moved to Friday indefinitely or kept to Thursdays.  If you have an opinion, go chime in! 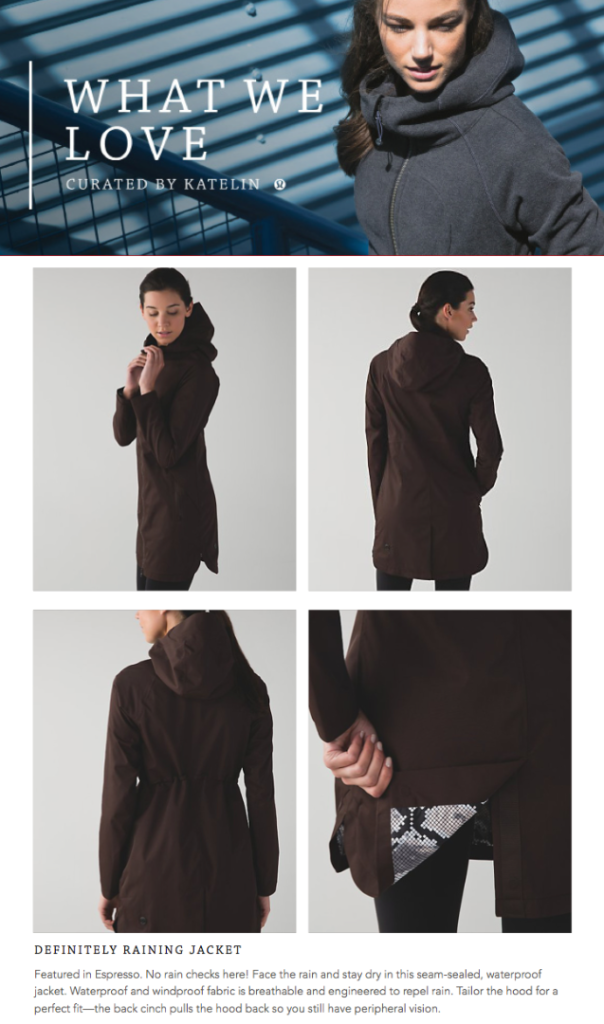 There’s a new rain jacket on the block: the definitely raining jacket.  Katelin notes this is intended to be an updated version of the right as rain jacket.  I know the RAR has been pretty popular in the past, so we’ll see whether this one is an improvement or misses the mark for RAR fans. 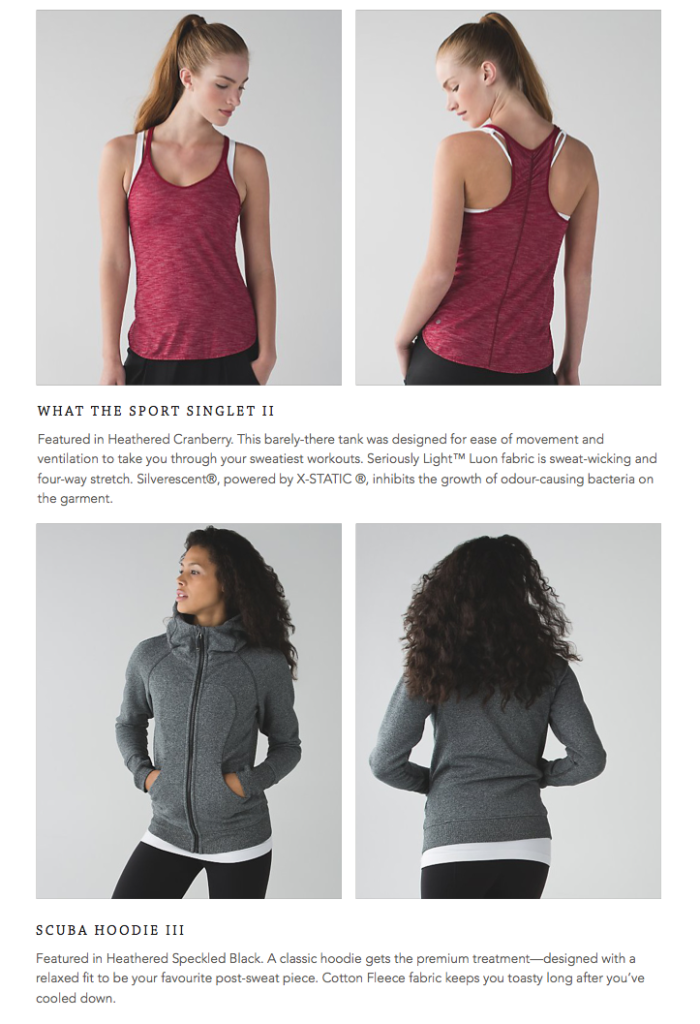 Lulu is going full force with design updates lately.  Here’s another one getting a do-over: the what the sport singlet.  The fabric and general fit seem to be the same, but they’ve switched up the details.  Katelin said the intent was to incorporate feedback of the WTSS being too boring, so they incorporated some feminine details.  The neckline and straps are a bit more delicate, and there’s some subtle ruched up the center upper back.  I’m still a little bummed to see that the straps are a bit close together, since that’s what threw off the look for me with the original WTSS (I like the wider-set straps of the CRB, for example), but I’ll give it another chance.

In the intro this week, Katelin went into detail about the new scuba hoodie iii.  The scuba update I featured this week in the overseas roundup was the *terry version, while this one is cotton fleece.  I had been curious whether there would be a cotton fleece version, and glad that there is.  I think these photos are much, MUCH more promising than the terry photos earlier this week.  The fit is still relaxed, but looks a little less sloppy.  I also like the more subtle front logo.  I would definitely like to try this on when I get a chance, but since the stores I usually visit are center-of-the-sun-hot, it’ll probably be a while.

Here’s another photo Katelin posted to the comments: 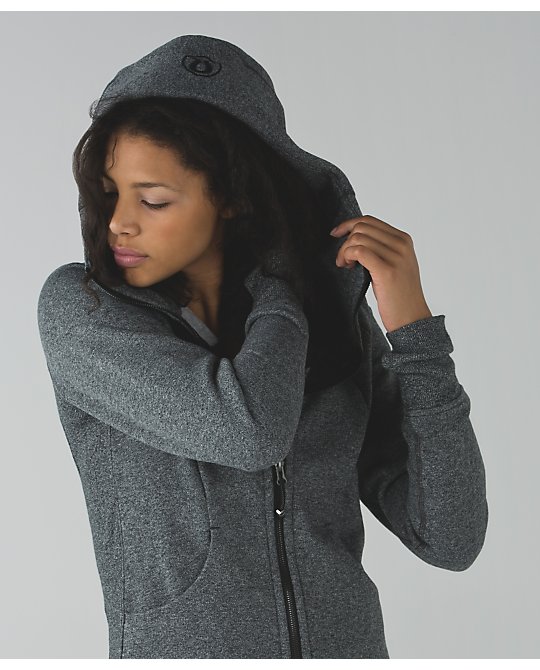 You can see the hood logo here.  The pic at the top of the WWL thread is also the scuba.

For all 3 of these updates (rain jacket, scuba, WTSS), I’ll be curious to see whether the price will change as well.  Sometimes it seems like new designs are an excuse to up the price, but we’ll have to wait and see. 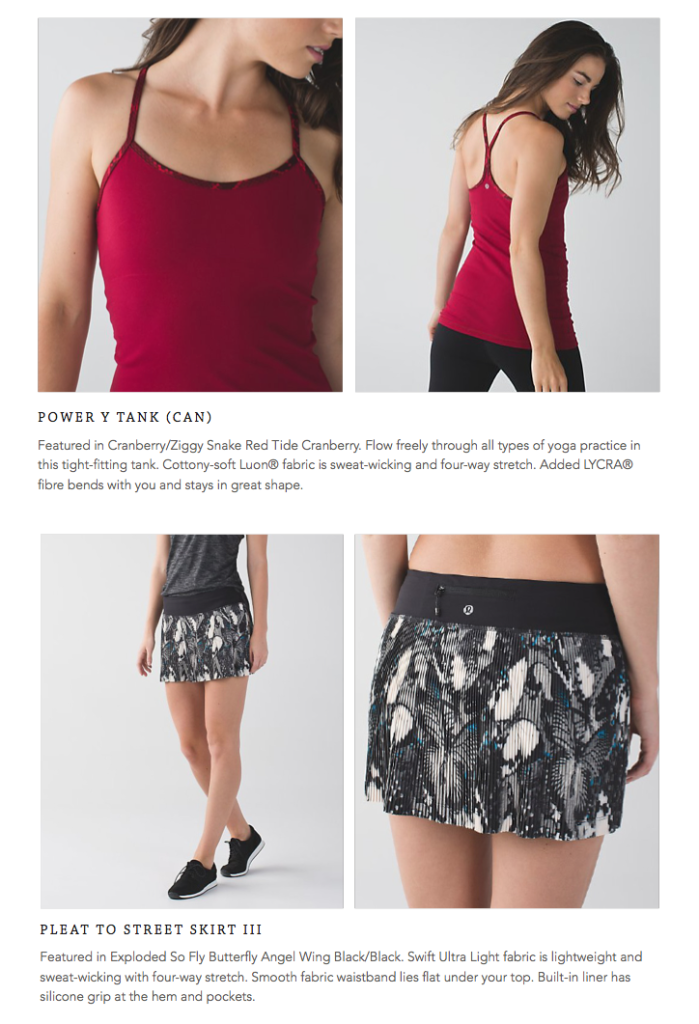 It’s going to be a very cranberry fall, with a power y coming next week.

We saw this butterfly pleat to street skirt this week overseas, but it’ll be headed our way this week (and maybe the pipe dream blue version that also was overseas?).  In the intro, Katelin confirmed that the pleat to street iii change is just the pleat width being narrowed. 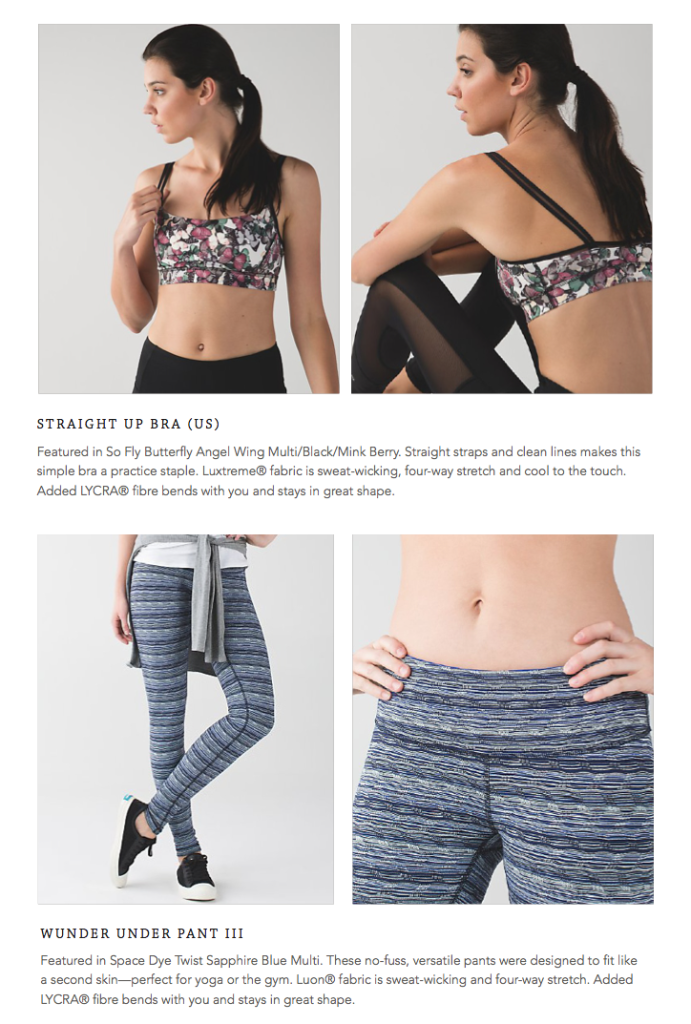 More butterflies: the straight up bra in so fly butterfly angel wing.

Another version of space dye twist is coming our way: sapphire blue multi.  This looks really promising.  I haven’t bought a pair of wunder unders in forever (no lie, I have 4 pairs of WUs total, including both lengths), but these might sway me, especially since they’re regular rise.

Also, speaking of wunder unders, let’s talk about the wunder under iii.  Katelin was savvy enough to predict that we’d all be wondering what the change was, so she explained in the WWL intro.  She notes that the waistband has been updated to fit better and minimize any cutting in/muffin top issues.  You can go to the original What We Love thread to see exactly what she said.  Interestingly, she did *not* mention any changes in the leg opening, which is one thing I noticed in the website product descriptions this past week. 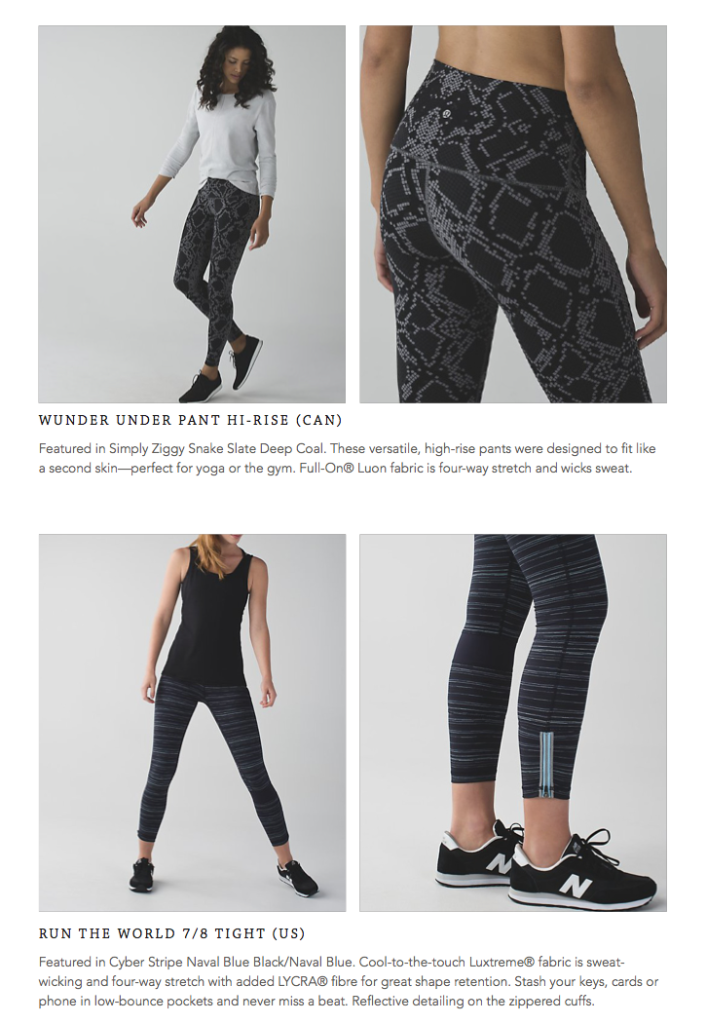 For those loving snake but not loving the bright colors, here’s some ziggy snake slate deep coal hi-rise wunder under pants for you.  In case you missed it, the hi-rise WUs are the new name of the rolldown WUs.  The waistband has been altered slightly in the hi-rise version, including the addition of a waistband pocket.

Rounding out this week’s previews, a new run style: the run the world 7/8 tights.  These look a lot like a run version of the high times.  Between the high rise, cyber stripe, and zipper detail, these are really reminiscent of the cyber stripe silver fox high times.  I’ll be interested to see more pics of this style, though I’m not sure about what looks like a band of colorblocked fabric at the upper left calf.  Luxtreme tights in 7/8 length are perfect for fall/winter crossfitting for shorties like me.