Next week has so much ridiculousness happening.  I mean that in a good way.

First off: next week’s first upload will be happening Sunday night, not the usual Tuesday.  This is only for this week for Cyber Monday, next week we will go back to Tuesday.  The second upload of the week will be Thursday.  I’m not sure which of these items will be in which upload.

Britt also noted that in the chaos of the holiday season, her picks moving forward may not be perfectly accurate as far as timing goes.

Also, I was super-pleased that this week, Britt’s picks is split up into multiple photos–this is so much easier for sharing with you guys than cropping it manually. 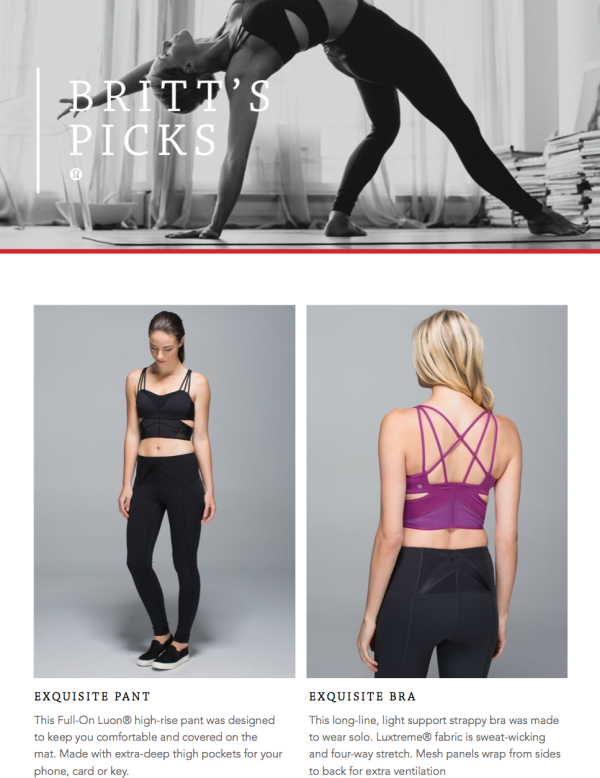 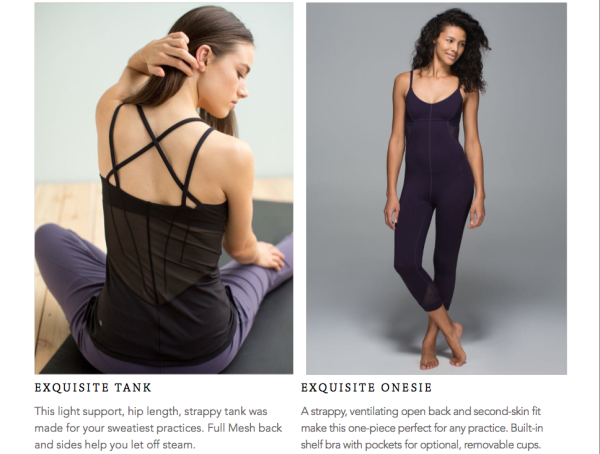 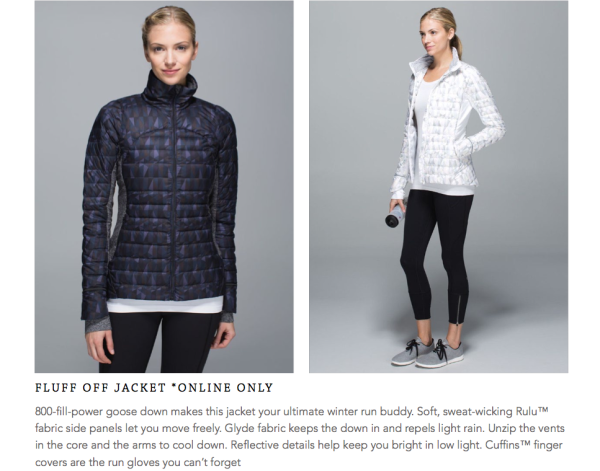 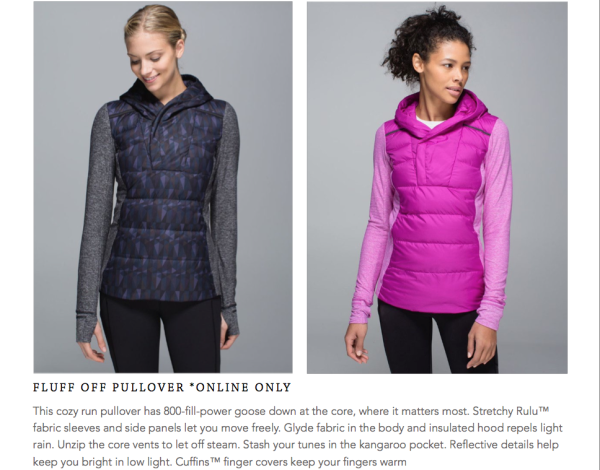 The fluff off jacket and pullover are returning!  These were first made last year and will be up in the current season’s colors online only.  I love my jacket from last year.  The white stained glass love looks so pretty, although it might get dirty easily. 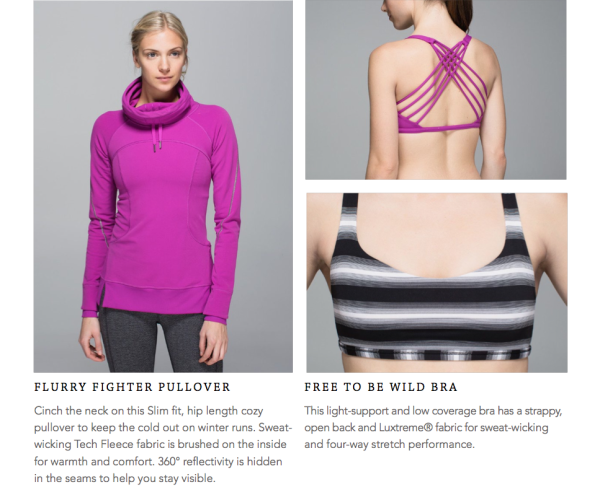 New flurry fighter pullover coming made of tech fleece.  It looks a bit like the stay on course pullover from a couple years ago.  Also, we’ve already seen the free to be wild bras in Canada stores, but they’ll make it online next week. 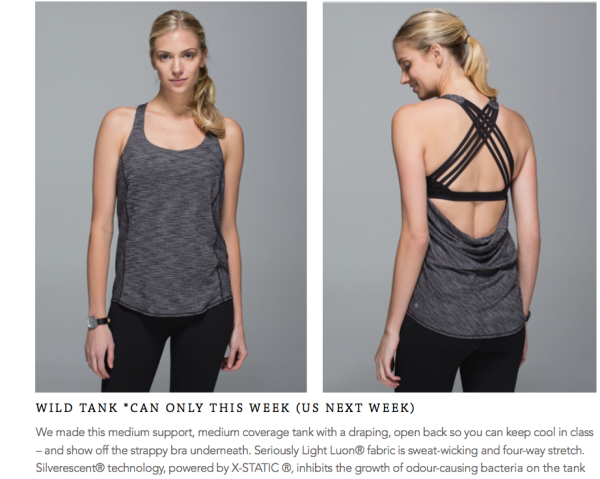 A new wild tank (based on the free to be wild) is coming to Canada.  It looks like it has more coverage and support than the FTBW bra, which is intriguing. 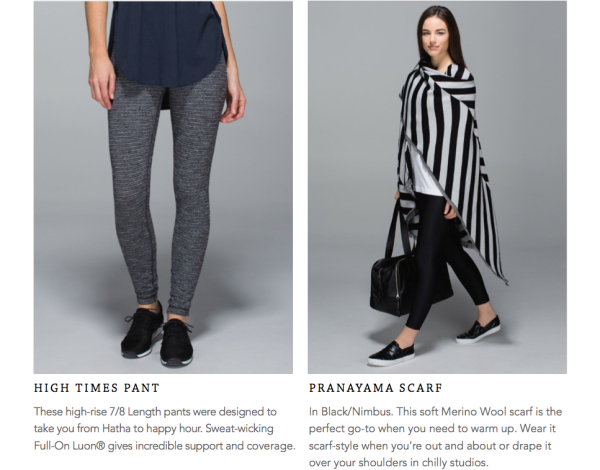 Finally!!  The black striped scarf from the product banner!  It’s not black and white, but black and nimbus, which is off-white.  I think I’m going to be giving this one a go, but not 100% sure yet.  I’m a little sad it’s not white/black after all.  Also, those who were wishing for rolldown coco piques can snag black coco pique high times pants. 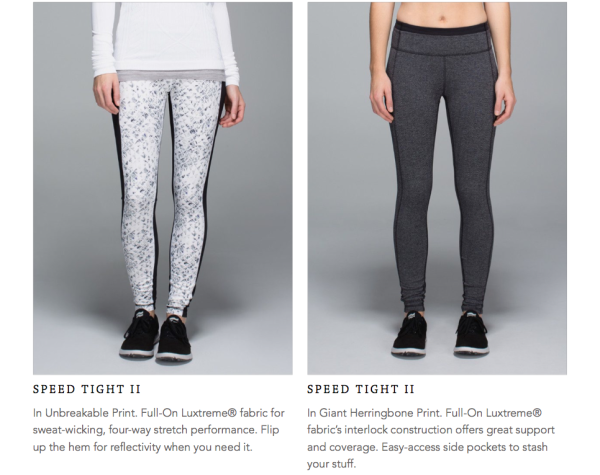 New speed tights prints coming.  The new unbreakable print is gorgeous, I love it.  I also love that Britt added the color names to the descriptions!  Giant herringbone speed tights are coming too.  Both are full-on luxtreme–I kind of wish they were brushed, but I guess you can’t have it all. 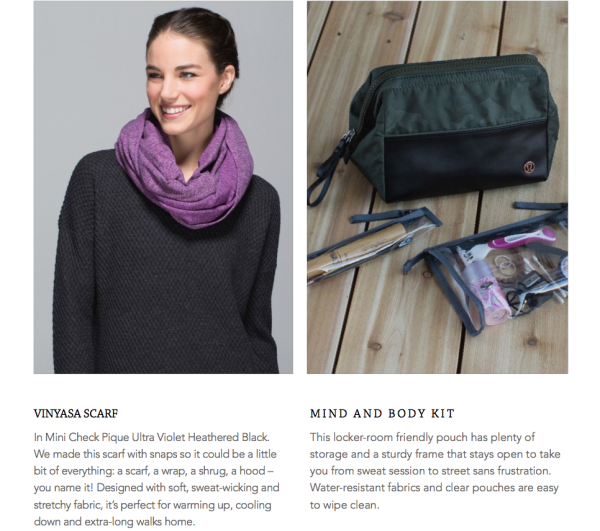 The fatigue camo mind and body kit will be coming to North America–I know lots of people will be excited about this.  Also, the new mini check pique ultra violet that was previewed in the UK this week will be coming in a vinyasa scarf!  Lulu definitely pulled out all the stops on overloading us with textured vinyasas this season.  You can’t see the ribbon in this pic, but hopefully it’s not clashy like the nightfall herringbone situation.