Britt’s picks this week is devoted exclusively to the new swim collection.  Sadly, we didn’t get any previews of the usual technical and transitional gear.  This week, it looks like they’ll just be uploading the surf to sand swim line, not the sea-me run collection just yet.

Also, Katelin mentioned last week that there would be a new name for the Britt’s picks feature this week, but I guess that’s been pushed back since it’s still labeled as Britt’s picks. 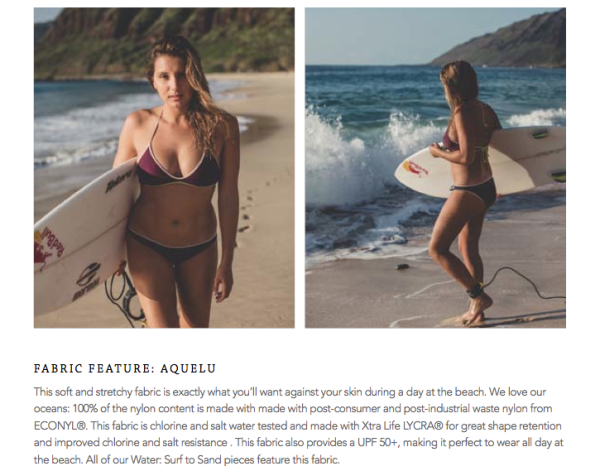 Just a little note here about the new swim fabric lulu seems to be very proud of.  Pictured is the black cherry surf to sand tie top and bikini bottom. 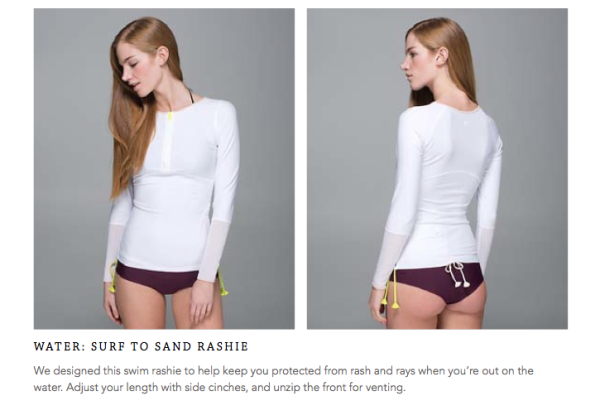 The rash guard will be out next week.  Note the side cinches and front zip.  Pretty sure this is the same rash guard in the Britt’s picks banner pic. 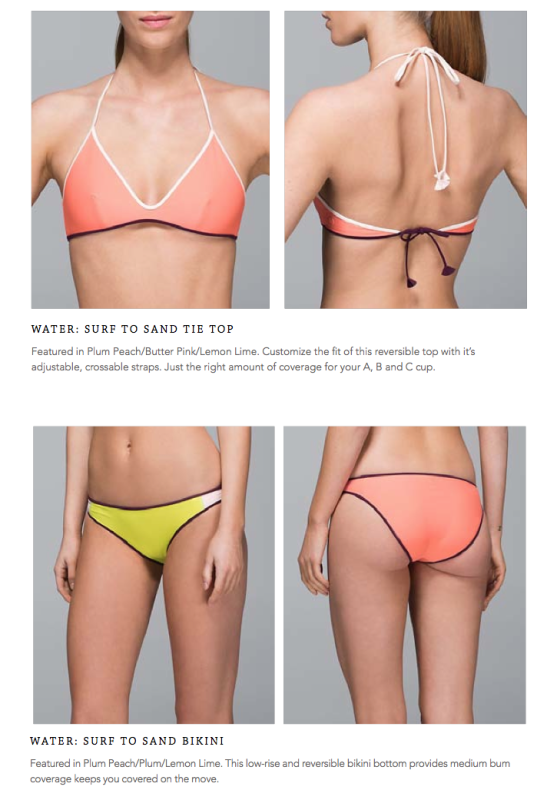 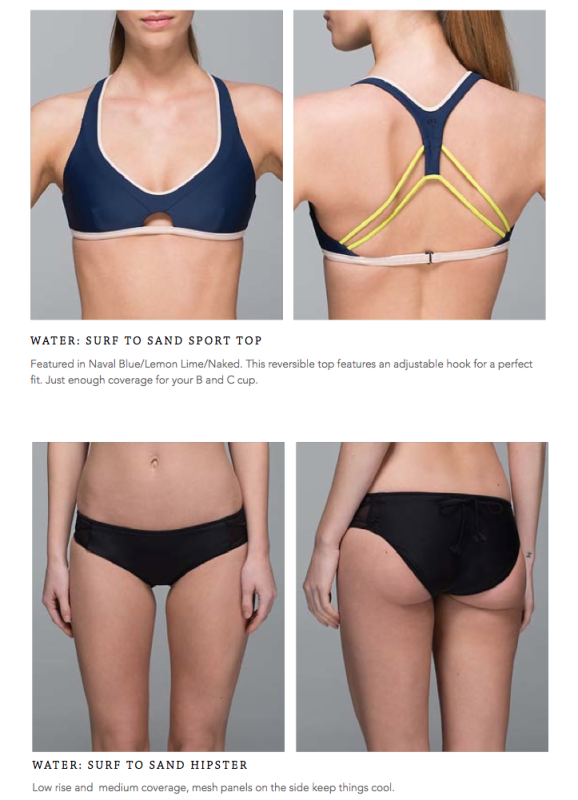 Naval blue is also going to be part of the swim selection.  The surf to sand sport top looks like it takes cues from the free to be wild bra.  Note the hipster has a little tie in the back.  It also has a little criss-cross detail on the sides you can see better in this pic from the Aussie site. 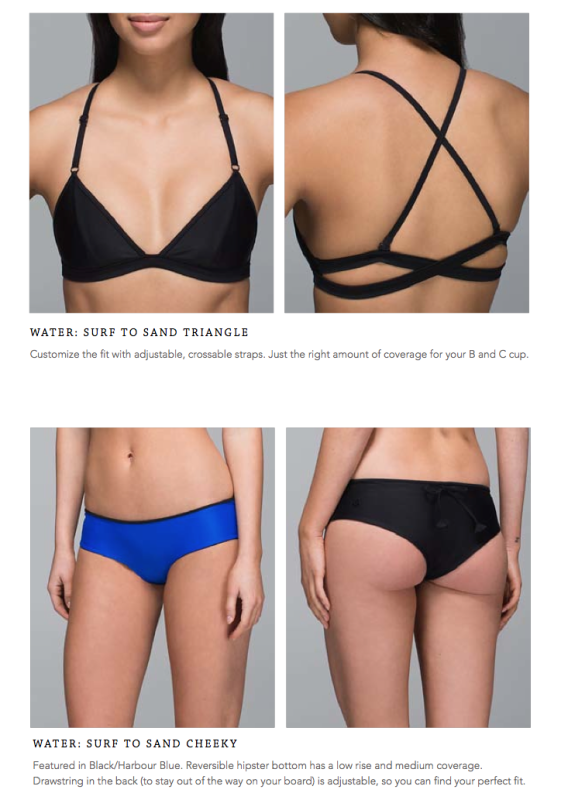 The new surf to sand triangle is a cute design.  The addition of the adjustable straps is really nice.  In the swim video, you can see that the other colors have pretty contrast trim.  Also, lulu takes their love of low-coverage swim bottoms to a new level with the surf to sand cheeky.  It almost feels indecent even posting this… 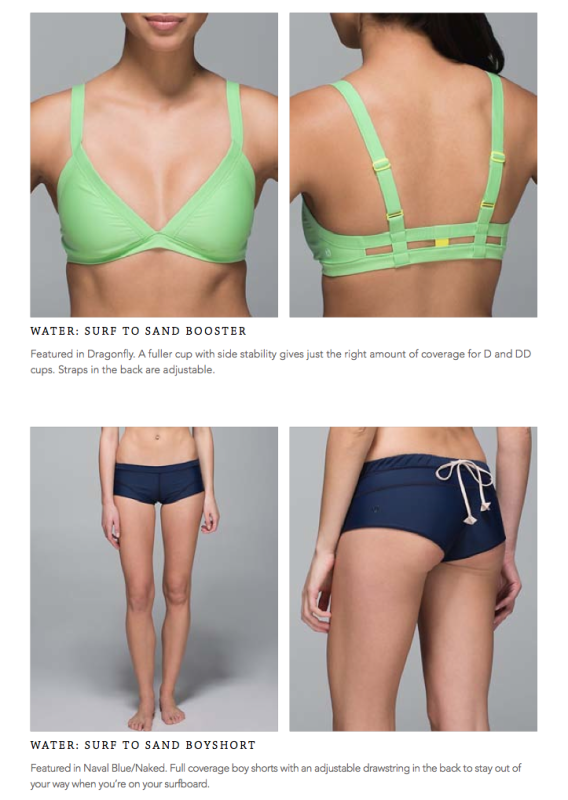 On the plus side, the new dragonfly color is cute!  Lulu is finally attempting to show larger-busted women some swim love with the surf to sand booster, a top said to be designed for D/DD ladies.  But I have to say, it looks like the cups are cutting in slightly on the breast tissue of this model as well as leaving quite a lot of cleavage, and she looks only moderately busty.  I think D/DD is a bit of a stretch.  Perhaps C is more like it.  Also, I don’t love the design.  Oh well, at least they tried…?  Also, another bottom: the surf to sand boyshort.  They’re called “full coverage” but lulu’s definition of “full coverage” definitely is not the same as mine.  I guess as far as lulu swim bottoms go, this one’s pretty tame… 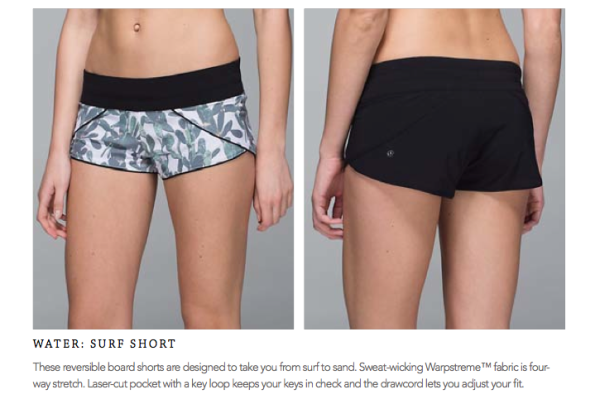 Lastly, the surf shorts are the winner in my book.  They’re extremely similar if not identical to last year’s shanti surf shorts, which were quite popular.  This print is the new prickly pear print that was on a tee overseas last week.  Some color speculation for these: harbor blue, naval blue, plum peach, dragonfly, and black cherry?  P.S. Lulu, this counts as full coverage. ;)