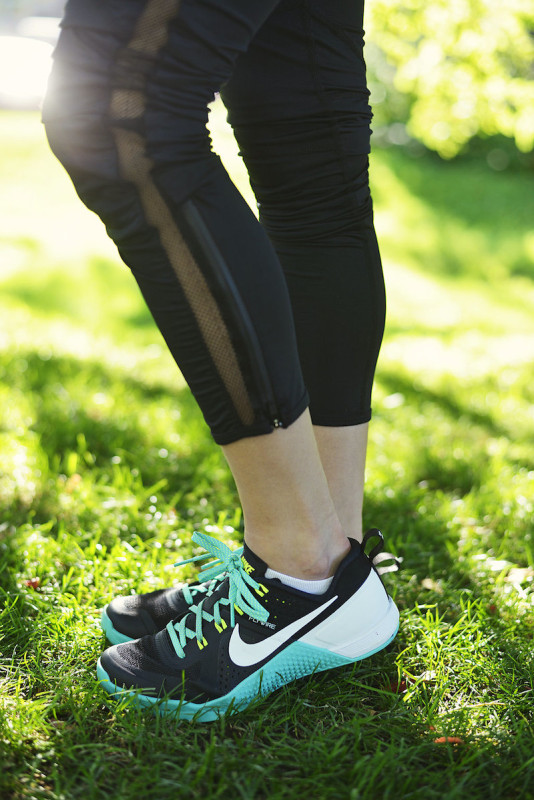 Finally, I got my very own pair of Nike metcons! 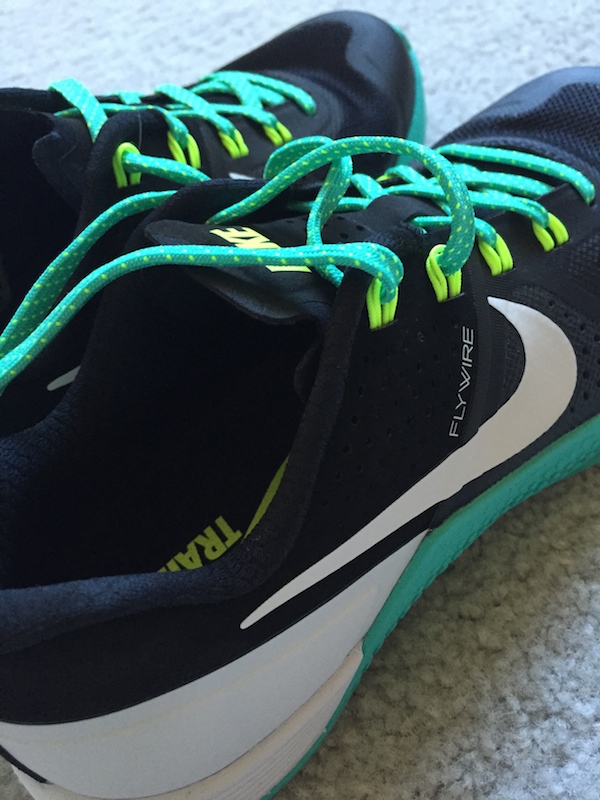 For those who don’t know, the metcons are Nike’s answer to the cross-training (read: CrossFit) shoe, meant to directly challenge Reebok’s nanos.  I’ve been wearing nanos myself since I started CrossFit 2 years ago.  They’re functional, durable, and comfortable, but they’ve never exactly been a fashion statement.  I wear the nano 4.0 right now, and they’re passable, but not my favorite.  I was even more let down to see that the most recent release, nano 5.0’s, are an aesthetic disaster as far as I’m concerned.  The large, blocky text they’ve been putting on nanos lately is extremely unappealing (writing on shoes? omg nope), and overall the design comes off as too blocky, busy, and masculine for my taste. 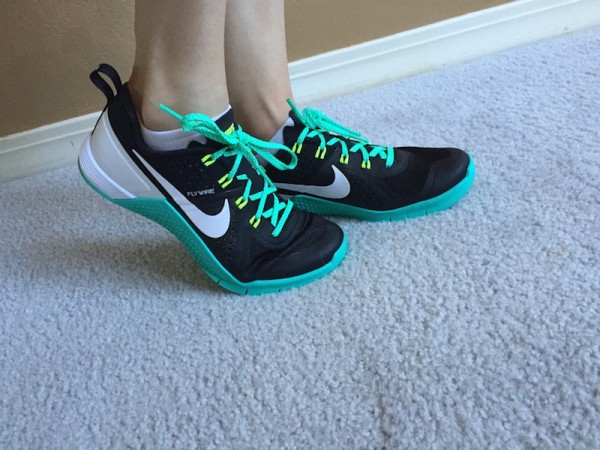 Enter the Nike metcon.  Finally, deliverance from fugly CrossFit shoes.  Clean, simple, and don’t swing too far to either end of the gendered spectrum.  Although I was eager to give these a try when the first release was announced, Nike’s metcon debut only included men’s sizes, much to the chagrin of female athletes everywhere (especially those of us with smaller feet!).  Just a few days ago, Nike finally released an official women’s shoe in 3 colors.  Hopeless teal lover that I am, I fell in love with the black/hyper jade (the Lauren Fisher edition) when I first saw them announced in May. 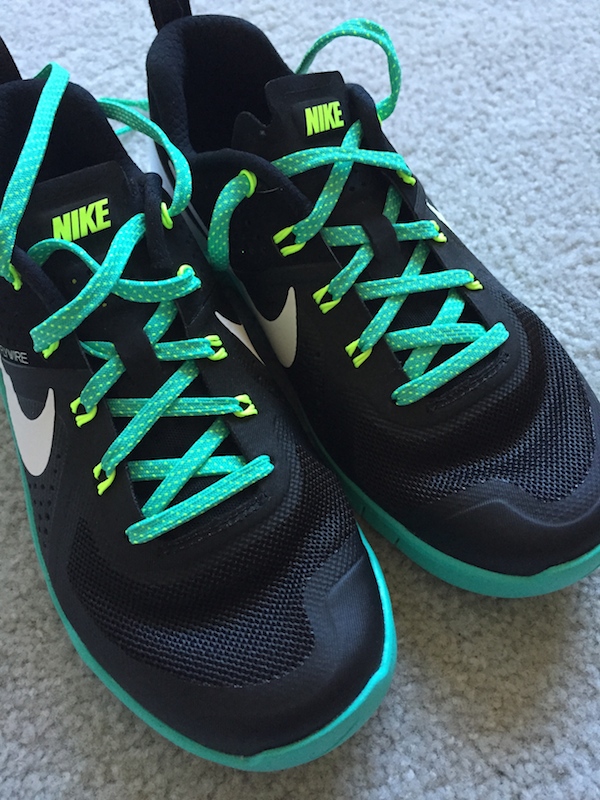 Getting my hands on these shoes was actually pretty dramatic.  On the morning of their release, I got on Nike’s website and added these to my cart within 90 seconds of them uploading.  I was immediately added to Nike’s online queue system (did they only upload like 10 pairs?) and waited for over half an hour before I had to leave my house and abandon my laptop.  I tried to add them again on mobile, but by then my spot on the waitlist was too low and I lost out.  I found them from another retailer, ordered a pair, but was later notified they were backordered til October.  Uh, nope.  I ordered from yet another retailer and was backordered again.  Thankfully, they restocked on Nike’s website the next day and I was able to grab a pair in stock and ready to ship.  Mischief managed, and I escaped a total meltdown over a pair of shoes, hah. (Though the $400 I had pending on my credit card after the 3-order fiasco was a bit of a PITA.)

Anyway, as for my actual thoughts on the shoes: 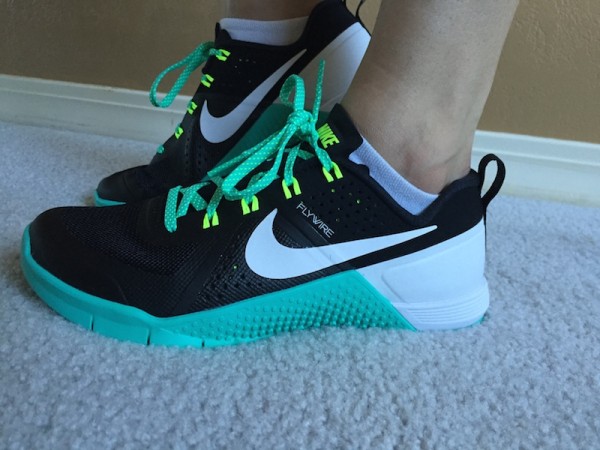 I ordered my metcons in a size 6.5, the same size I wear in Reebok nanos and my normal size for street shoes.  I think this was the right choice, so I recommend sticking with your usual size there.  Right out of the box, the metcons fit more firmly than nanos.  Although lightweight and pretty flat, they’re not a minimalist shoe.  They hug your foot, while the nanos are lot more loosey goosey (<- technical term).

The metcons have a more narrow cut, but still have a good amount of room in the toe box.  Even though my forefoot is a touch wide, I had no issues with the cut and didn’t feel like I needed to size up for this.   They also don’t have the rubber “cage” on the forefoot like the nano 3.0’s and 4.0’s, so the metcons have good flexibility and no pinching anywhere.  There’s more padding surrounding the back of the heel (i.e., achilles area, not sole) in the metcons, but oddly my heel actually felt a bit less secure.  I didn’t slip, but didn’t feel as locked down in the heel area as the rest of my foot.  That’s pretty much my only grievance as far as fit goes. 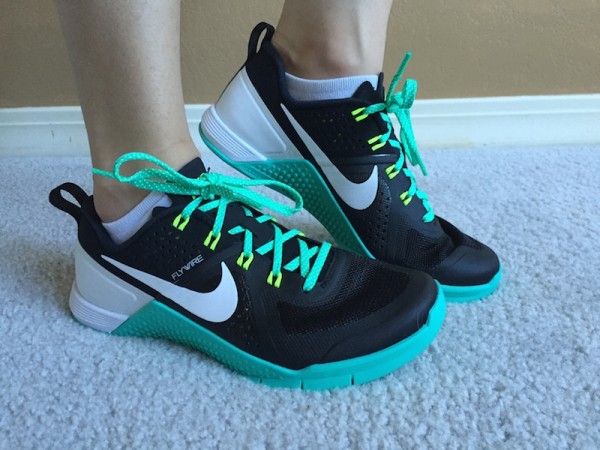 I also really appreciate the arch support on the metcons.  I have fairly high arches, and nanos don’t do anything for me there.  I can actually feel arch support in the metcons.  To test this another way, I put a metcon on one foot and a nano on the other and walked toward a mirror.  From watching my gait, the metcons appeared to do a better job of stabilizing and mitigating pronation. 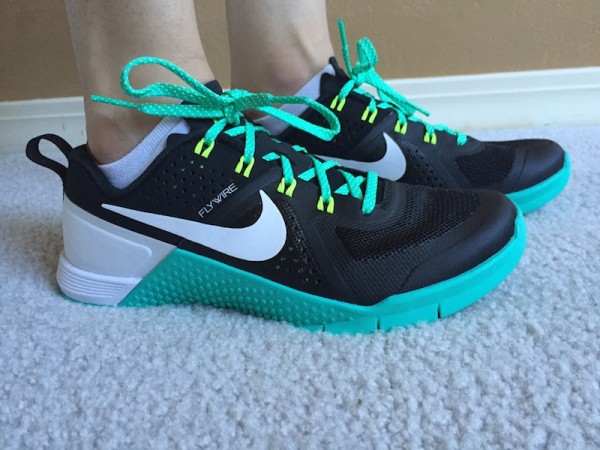 Both metcons and nanos have a modest 4mm drop from the heel to toe.  The sole on the metcon is very firm, and feels slightly thicker and more substantial than the nano.  I couldn’t find any specs on sole thickness, so I’m not sure if there are numbers to back this up so I’m not sure if the sole is actually built thicker or if it’s just my perception.  This sole construction feels like it will be more comfortable for workouts involving a little more running.  I did a quick 400M run warm-up and they felt great.

I wore the metcons in a WOD (one that I totally made up for the express purpose of shoe testing, hah) involving rope climbs, box jumps, power cleans, and overhead squats.  The grip on rope climbs was fantastic!  I’ve seen shoes flake apart after one rope climb, but you couldn’t even tell I had done anything in these shoes after my workout.  I felt stable and secure in the rest of the movements as well.  They felt good and powerful for my lifts, none of that squishy, wobbly feeling you might experience while lifting in a pair of runners or cross-trainers. 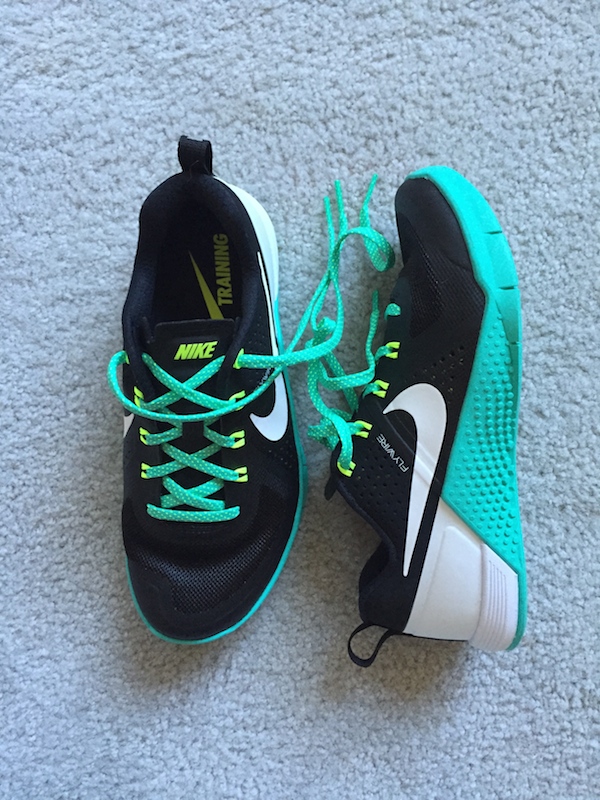 Overall, I’m really happy with my metcons so far.  Not only are they easier on the eyes, they’re also comfortable and functional for my fitness needs.  Of course, you don’t have to do CrossFit to get use out of these shoes–they would work well for other types of cross-training and general gym-going.  So, if you’re a CrossFitter who wants a little more structure in your shoe, if you have narrow feet and/or find the nanos too wide, or if you like a little more arch support, I recommend giving the metcons a try.  On the other hand, if you have a very wide foot or prefer minimalist shoes, proceed with caution.  Since I’ve only worn these a couple of times, I’ll be very interested to see how they break in and feel after another month or two of WODs. 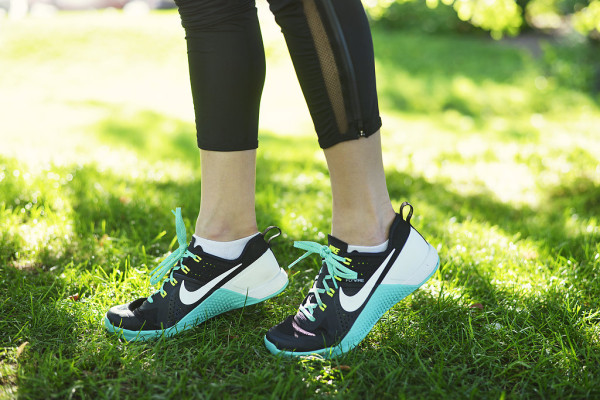 Update: I’ve been wearing this same pair of shoes for several months now.  They’ve held up very well over the months and broken in nicely.  I have zero complaints at this point and will definitely purchase another pair.  P.S. I occasionally use a baby wipe to keep them looking on point. :)

Find a pair of metcons here

via Nike | via Finish Line | via Rogue Fitness 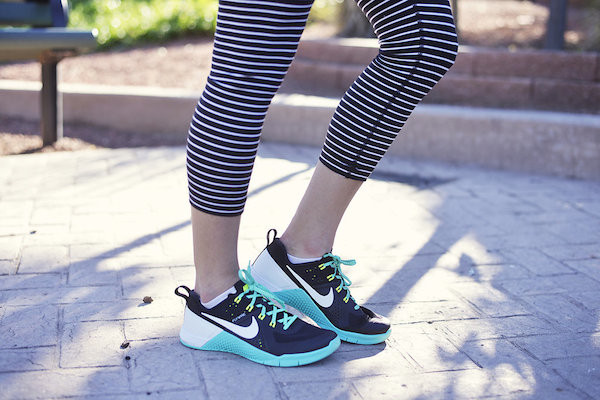