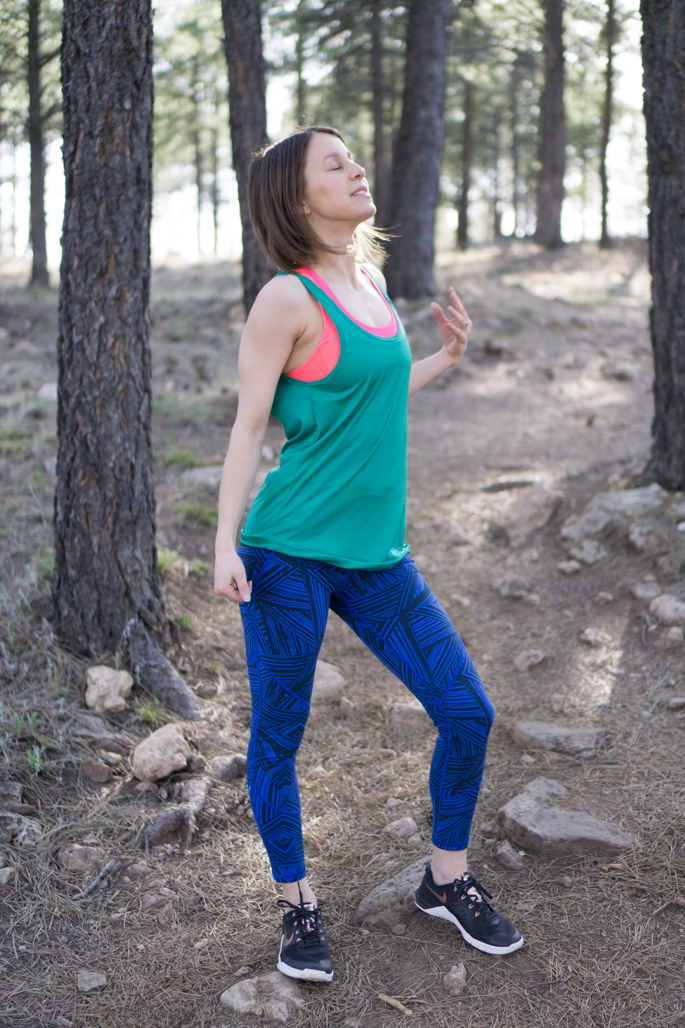 When you’re putting yourself out there on the internet, of course you’re going to work to put your best foot forward.  People would generally rather look at nice photos–myself included!  But don’t be misled: taking outfit photos is NOT all fun and games and looking pretty.  There’s a whole lot of real life that goes down behind the scenes.  Today I’m switching things up a little by sharing the photos that wound up on the proverbial cutting room floor.

For one post with 8-15 final photos, I’ll take anywhere from 60 to 150 pics.  I’ve honestly never been very comfortable in front of a camera nor do I fancy myself some sort of effortlessly photogenic person.  But, I grin and bear it for the sake of what I do enjoy: writing, creating something original all my own, and sharing information.  With that in mind, rooting through the 90%+ of pics that don’t make the cut gets really interesting, not to mention humbling.

Here’s a glimpse into some of my less photogenic moments and photography disasters.  These photos are totally unedited so you can appreciate all their raw glory. 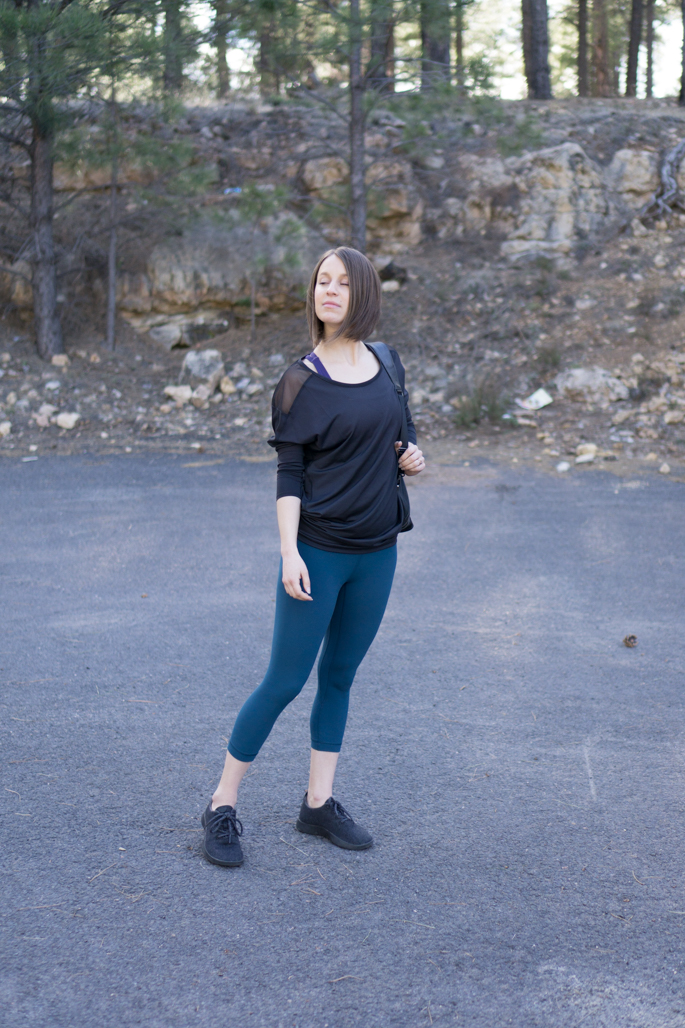 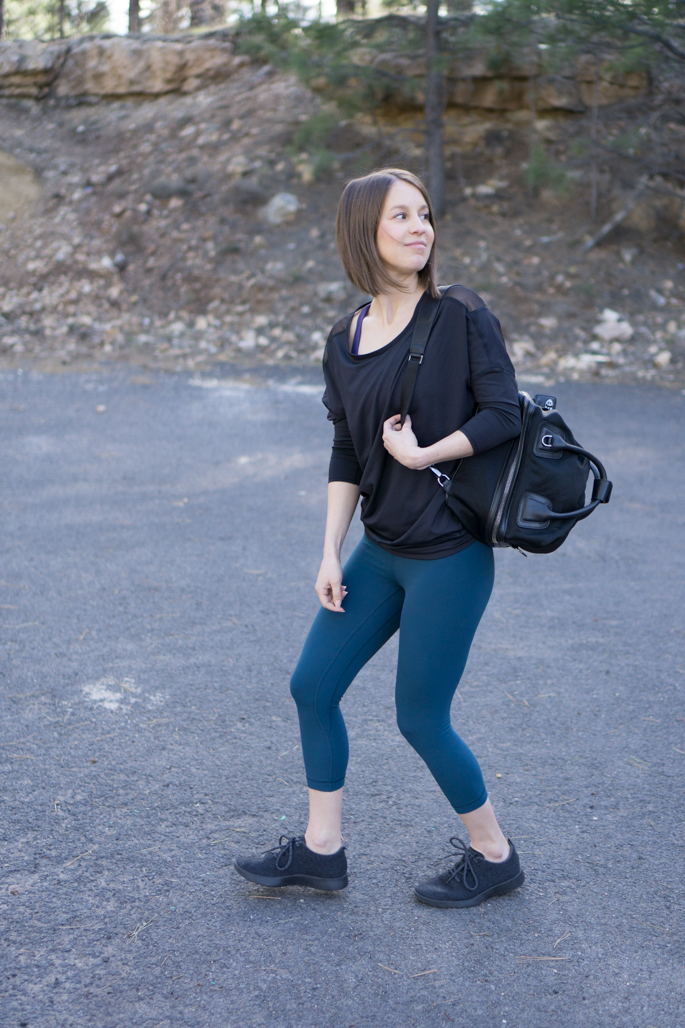 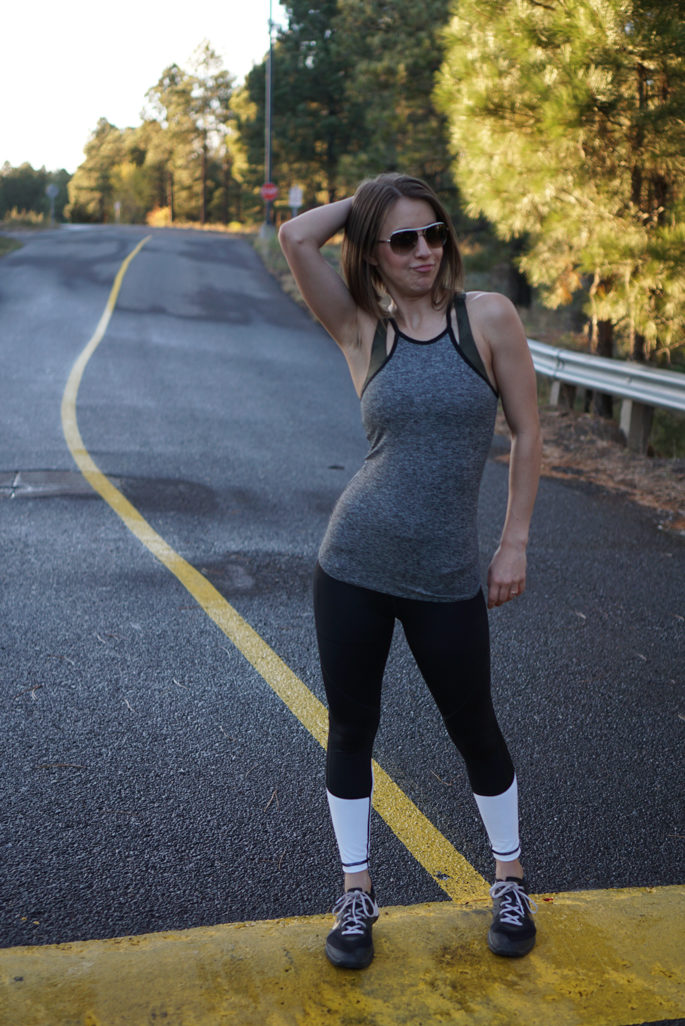 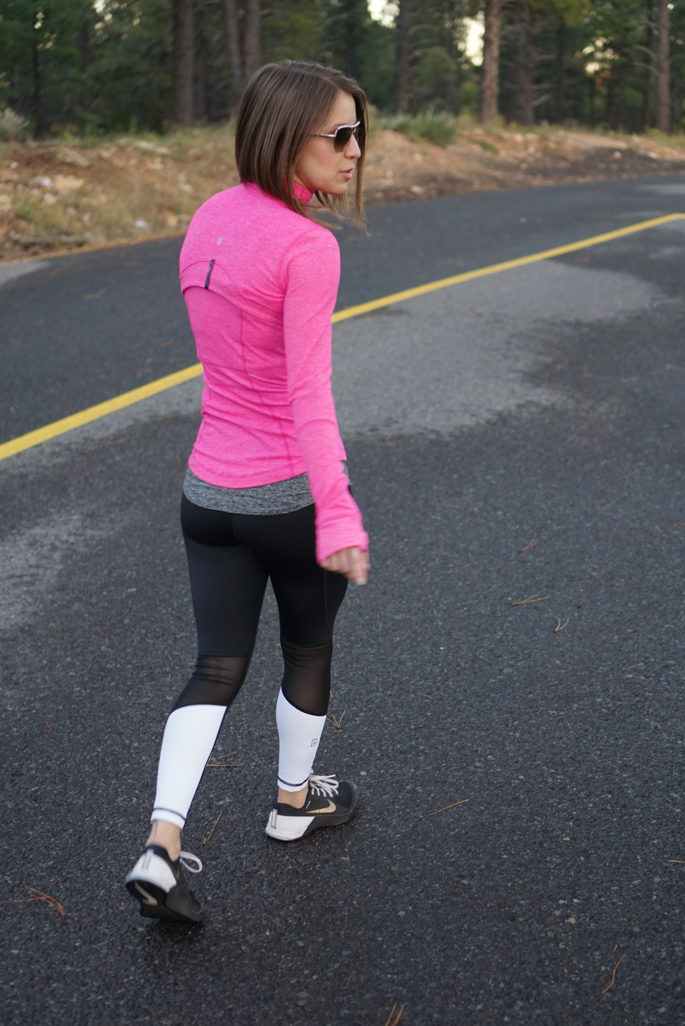 I always think walking/running pics will look neat but oh man, they never do. 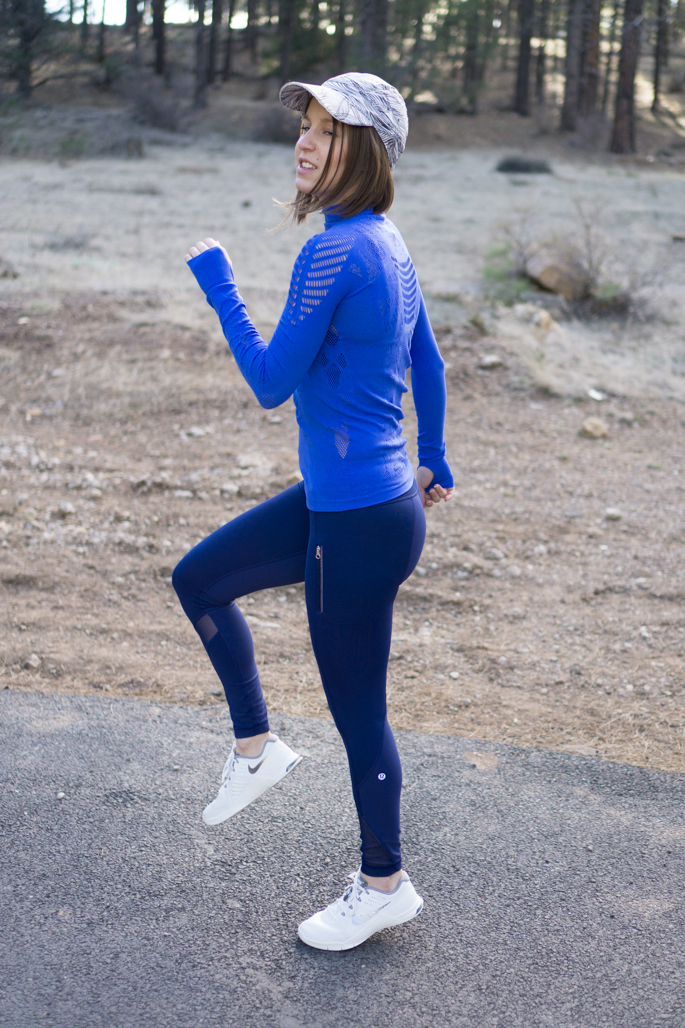 “I’ll do one of those running in place pics, it’ll look cool.”  Famous last words. 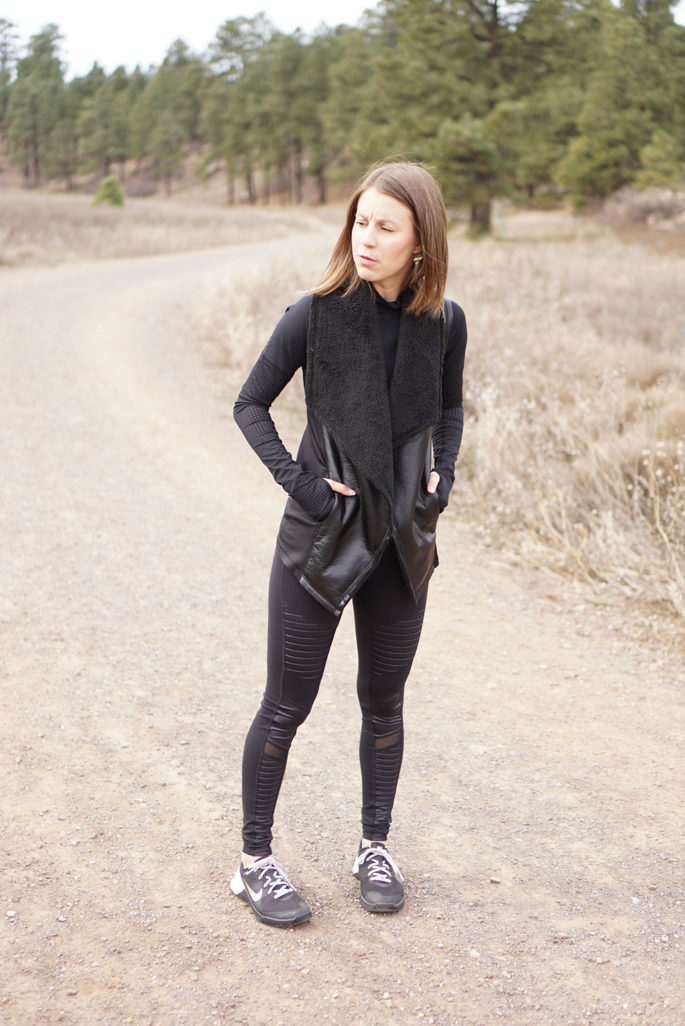 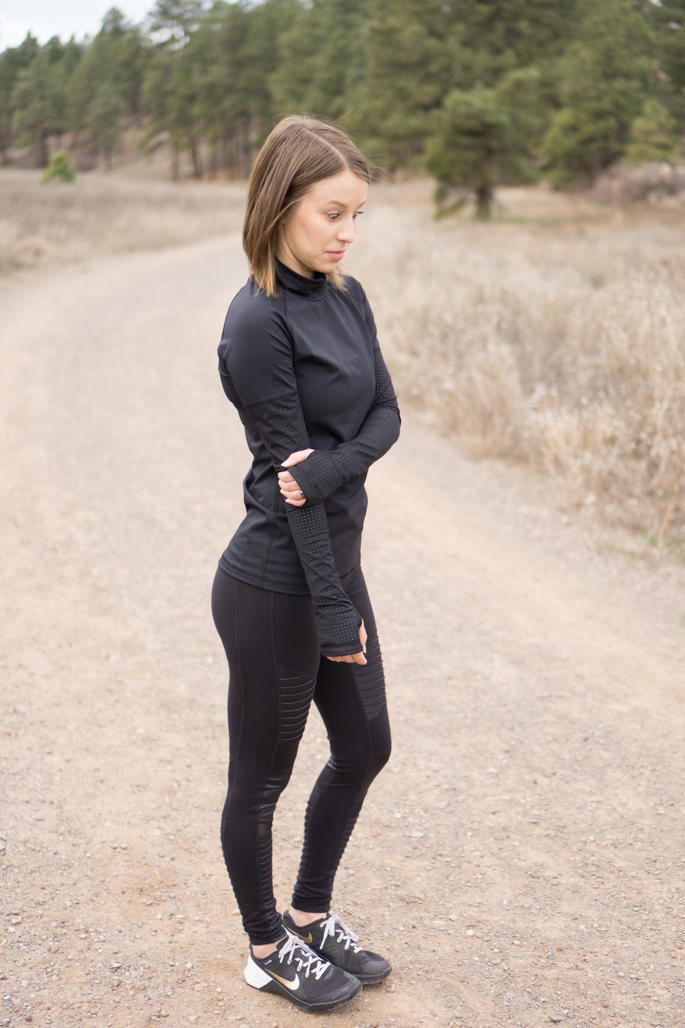 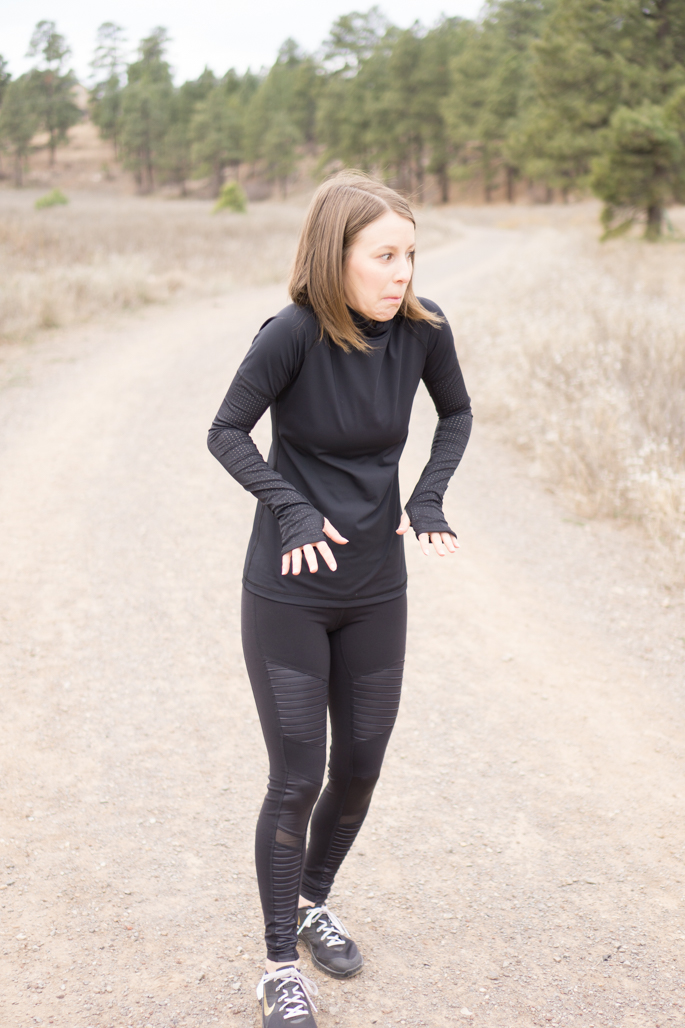 The faces I make when I’m looking through my photos, probably. 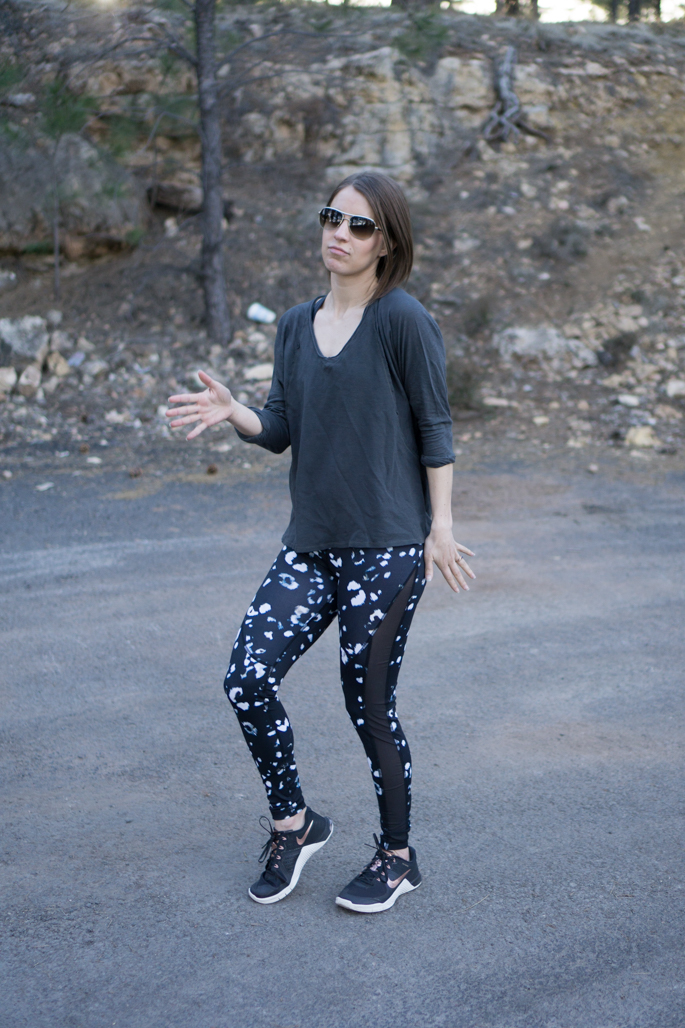 Literally no idea what I was going for here. 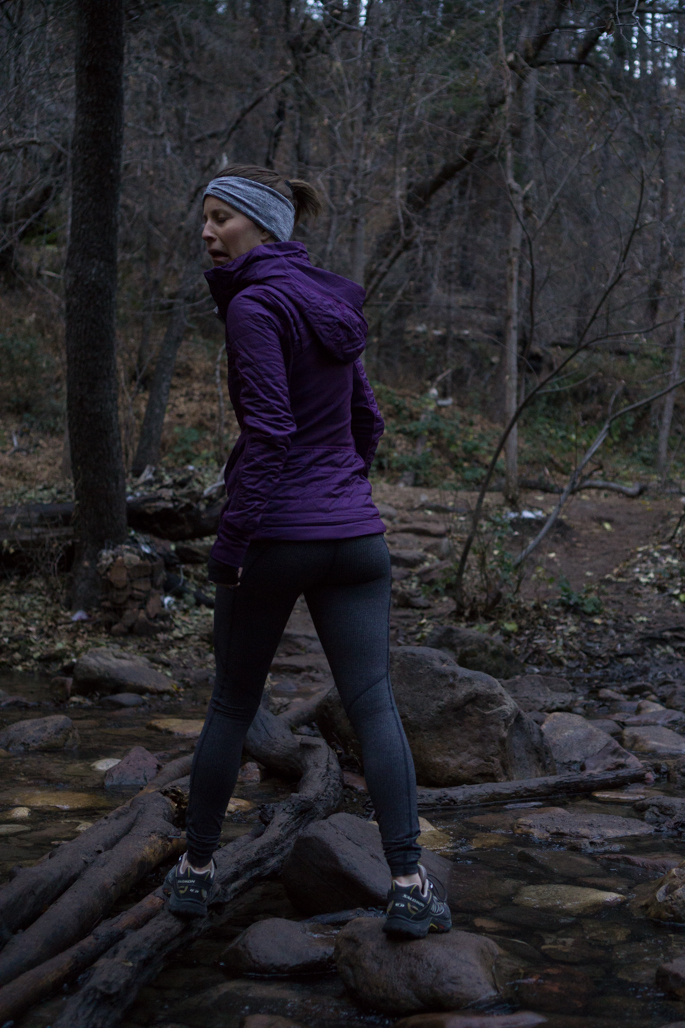 We drove 45 minutes each way to this location and took nearly 300 pics of just one outfit for a final post with only 20 photos.

When we started taking pics, I thought I had gotten the camera settings right.  Throughout the pic-taking process, I previewed the photos on the camera and was really excited about them–with a few notable exceptions of me looking lightly traumatized while crossing the creek on wobbly logs.

Then when I got home and plugged them into my computer…disaster. 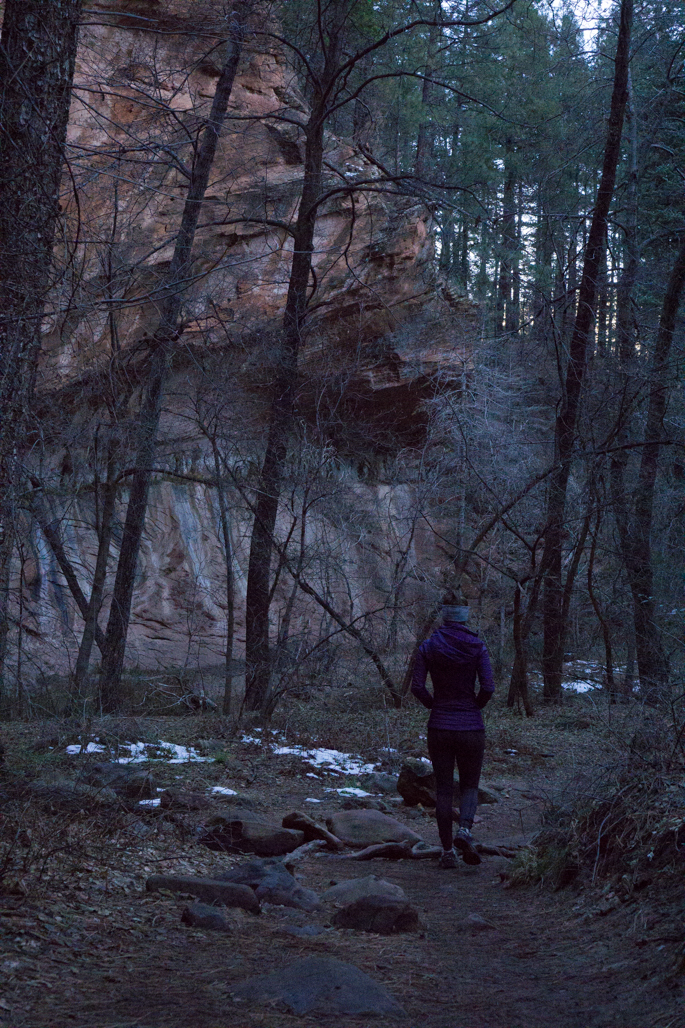 What I found was loads of horribly dark photos.  Then when I turned up the exposure, they were disastrously grainy.  I was on the verge of panic.  I had 300 crappy photos and no time to reshoot because the post was on a deadline.  On top of that, the post was sponsored, and when I’m being paid, I put twice as much pressure on myself to create something I’m proud to present.  I had no choice but to burn the midnight oil and salvage what I had.  On the plus side, many of the pics were good shots in terms of composition/posing, the blame rested squarely on the photo settings.  I spent hours slaving away at my computer trying modification after modification before I started to get something workable.

On that note, if you’re wondering why a lot of the photos in the final post have a slightly ethereal, blurred look to them, my poor choice of photo settings was the culprit.  The “soft” look was a side effect of de-graining the photo. (For my photogs out there: ISO 3200 with a 1/1600 shutter speed in a dark canyon?  What was I thinking.) 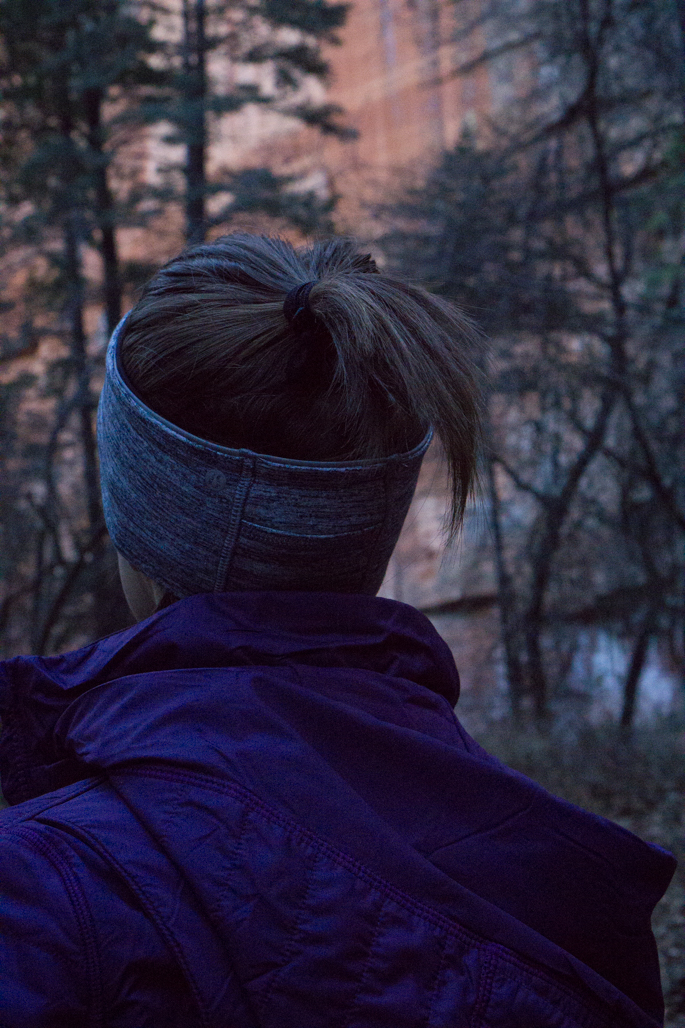 The icing on the cake: my headband was upside-down the entire time!! <facepalm>

In spite of all this, the end result wound up being one of my most successful posts and I learned a ton about editing from creating it.  Ultimately, this near-disaster had a happy ending. 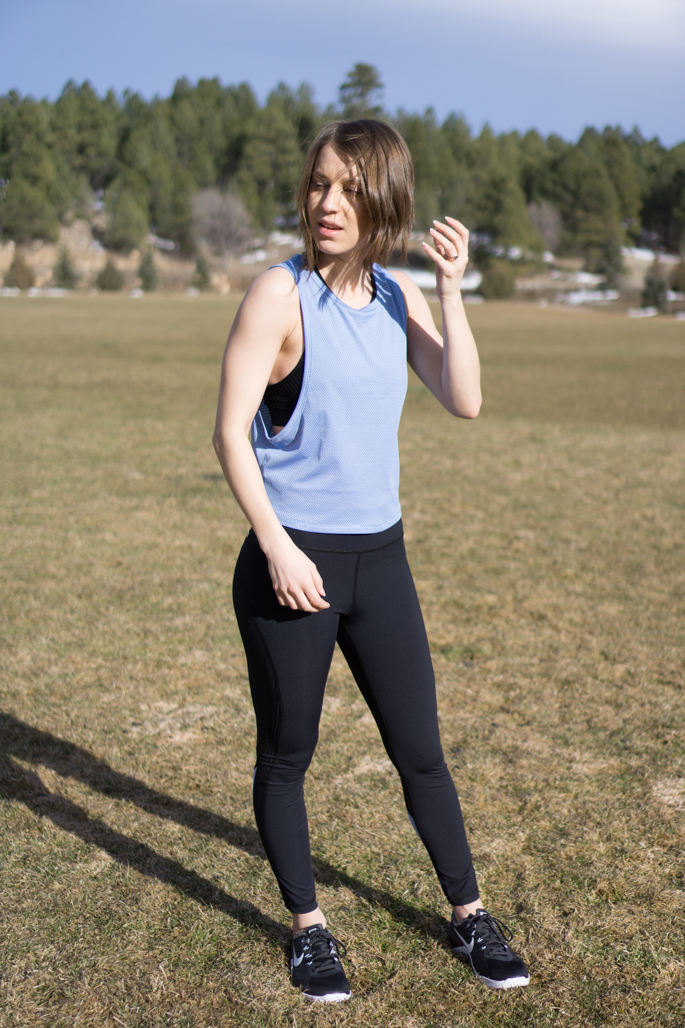 This was another photo shoot gone wrong.  I tried to branch out a bit with a different location and different lighting.  It was 40-something degrees with 30 mph winds, full sun, and mud everywhere.  We spent about 20 minutes trying to get some workable pics, but eventually threw in the towel. 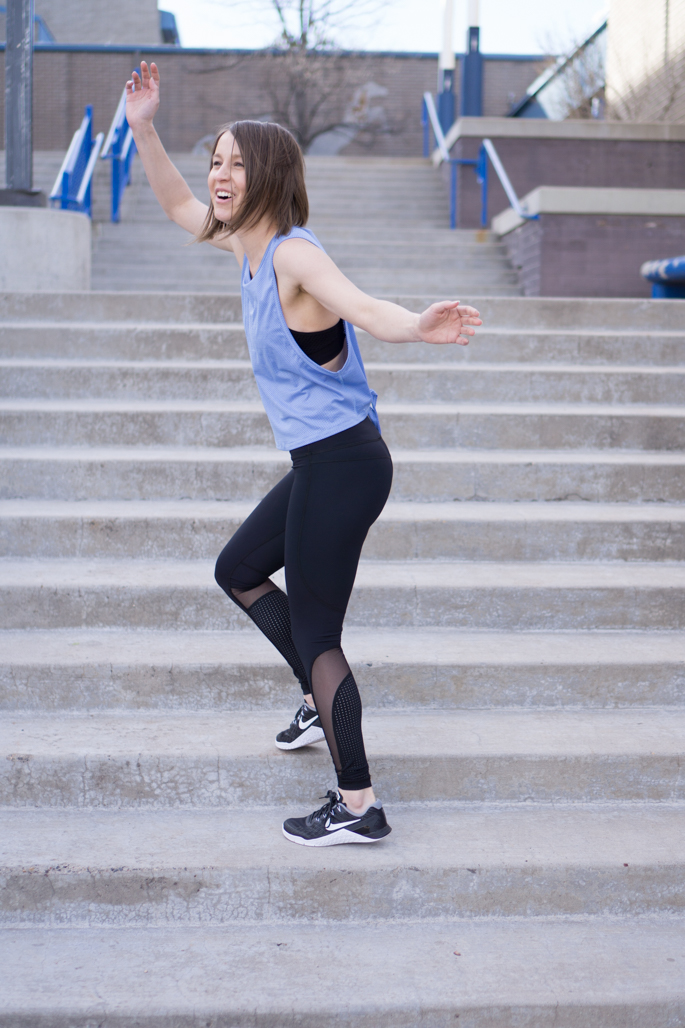 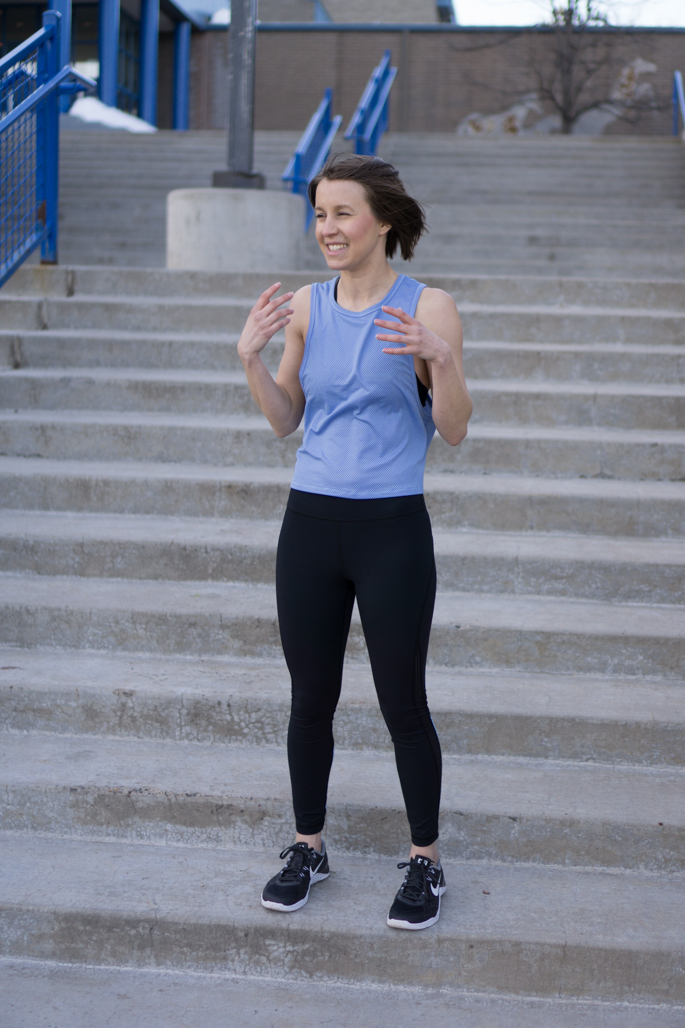 We redid the shoot the next day at a different location (read: different lighting) with much, much better results.  It was still FREEZING though.  I alternated between blitzing as many photos as possible and jumping around in my coat to try to stay warm.  When I said this top was lightweight and breathable, believe me it is. 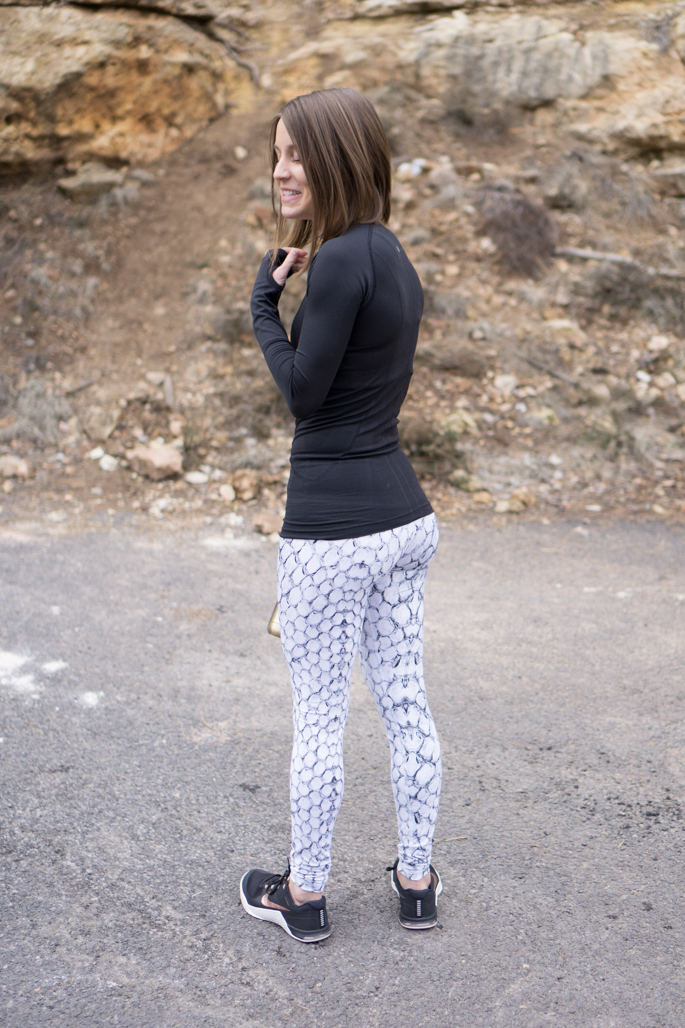 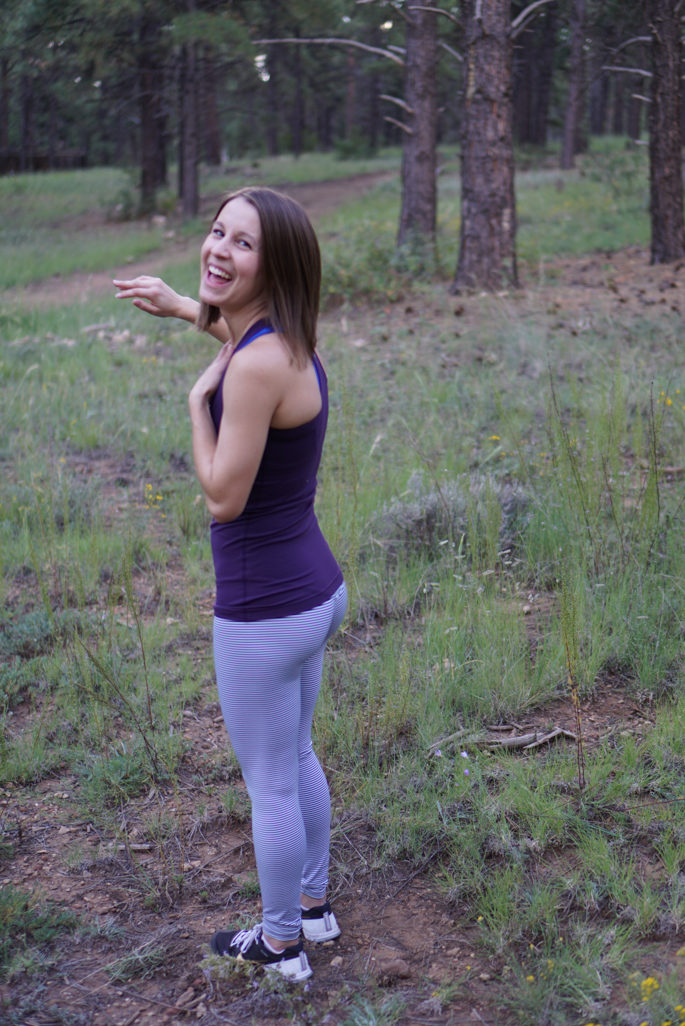 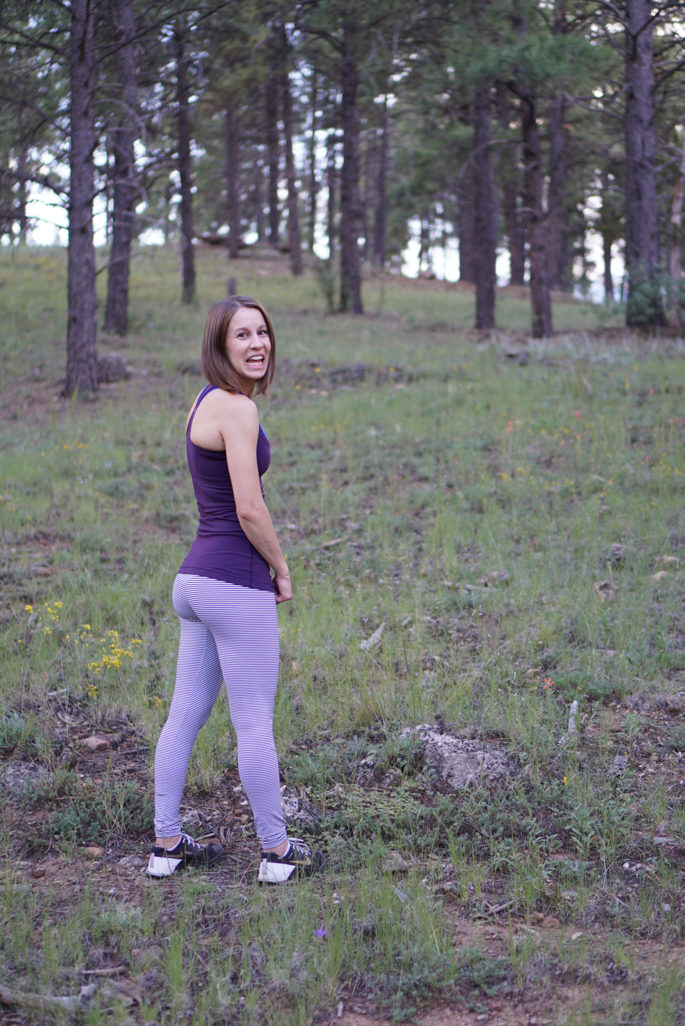 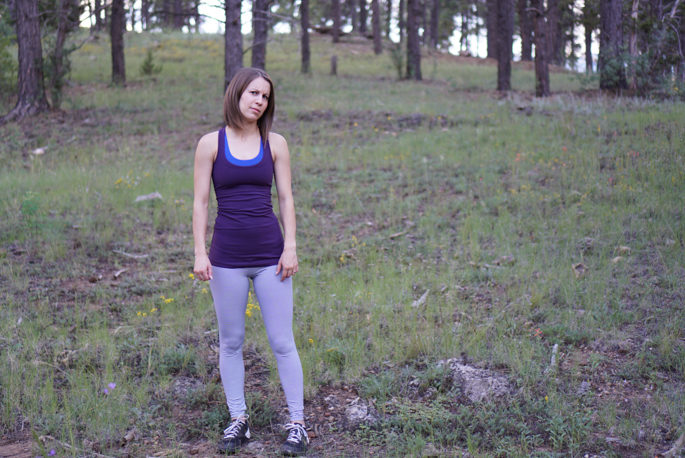 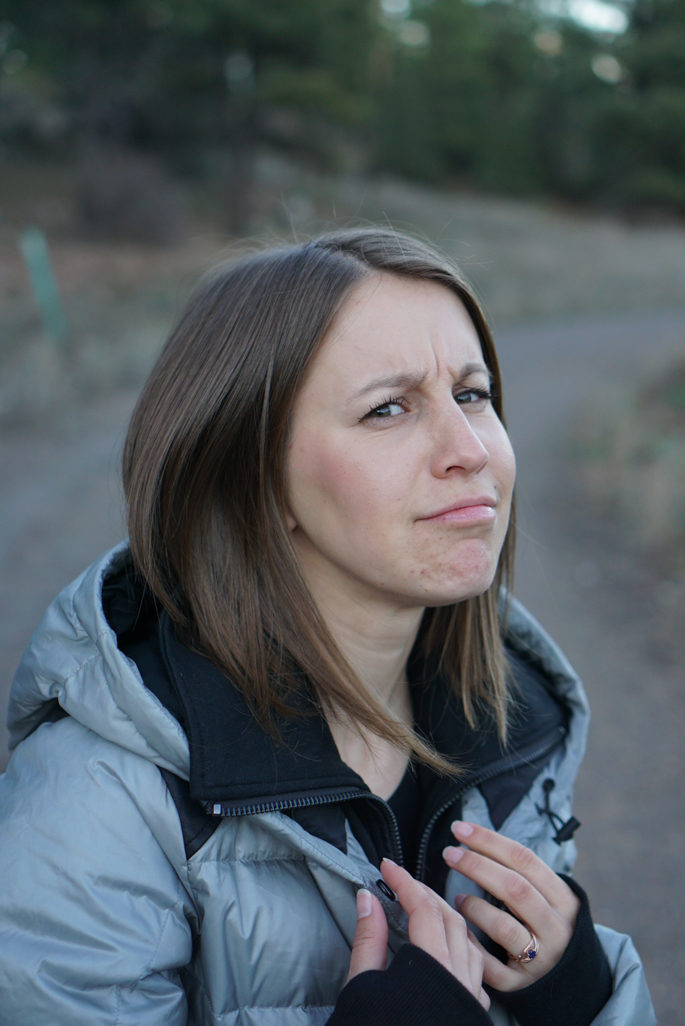 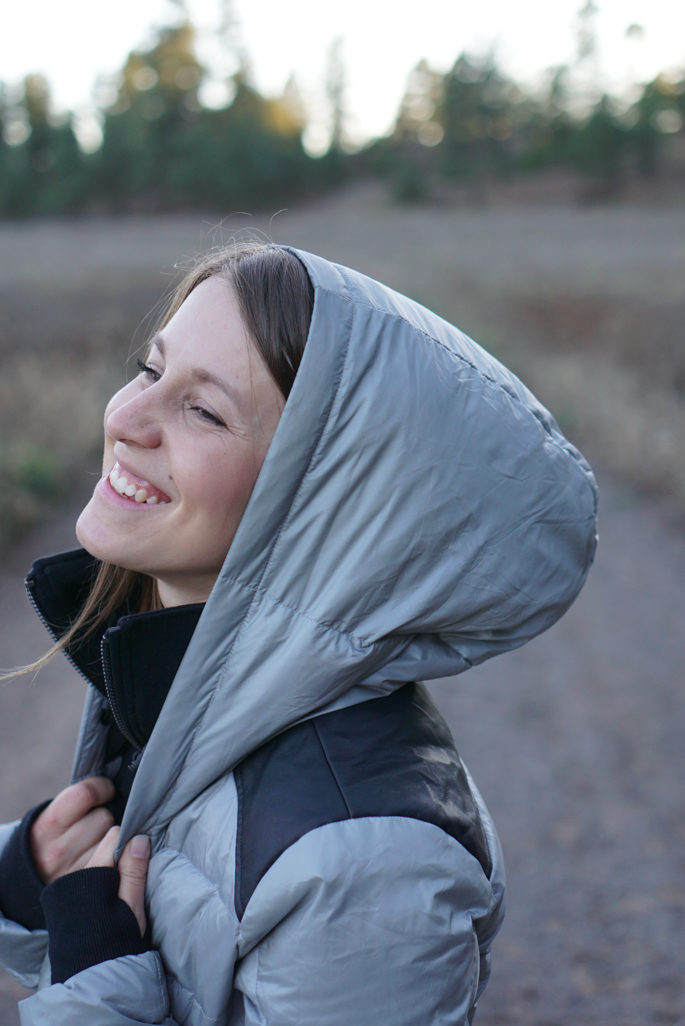 I thought wearing the hood up would look cute.  Mr. AA said I looked like an alien.  He’s not wrong. 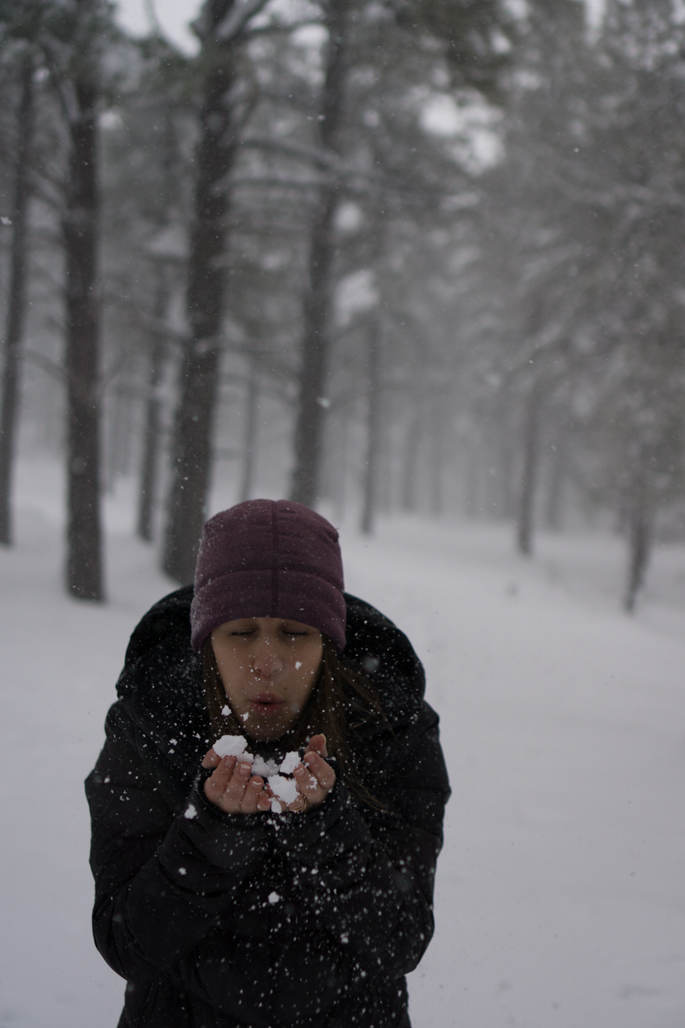 Although slightly cheesy, snow blowing pics are kinda cute.  Turns out it’s harder than it looks and usually just looks kind of forced and awkward. 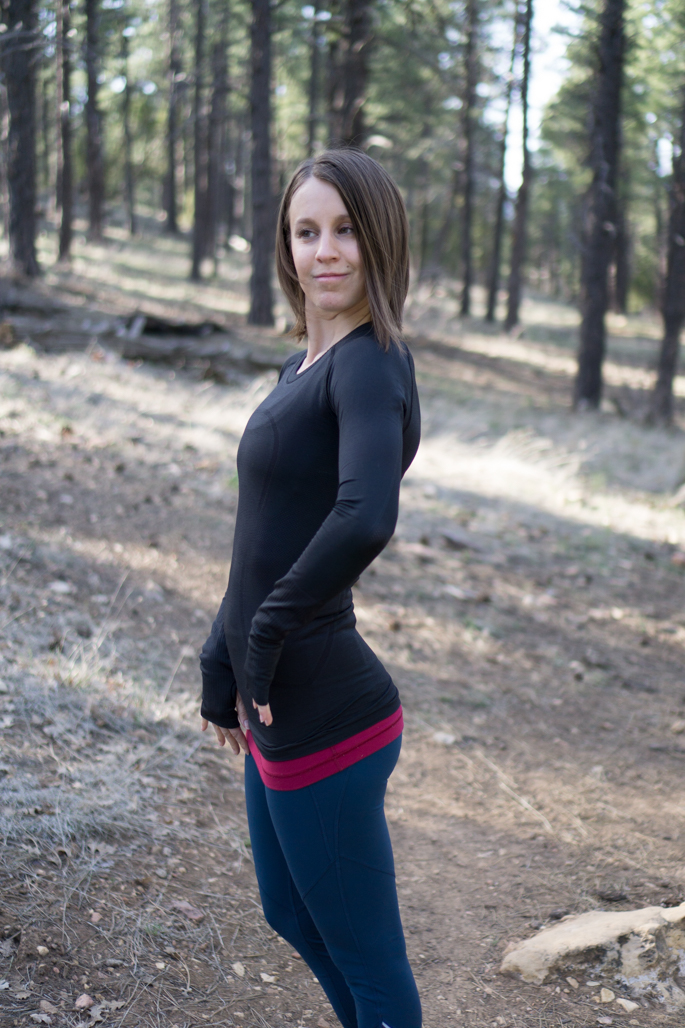 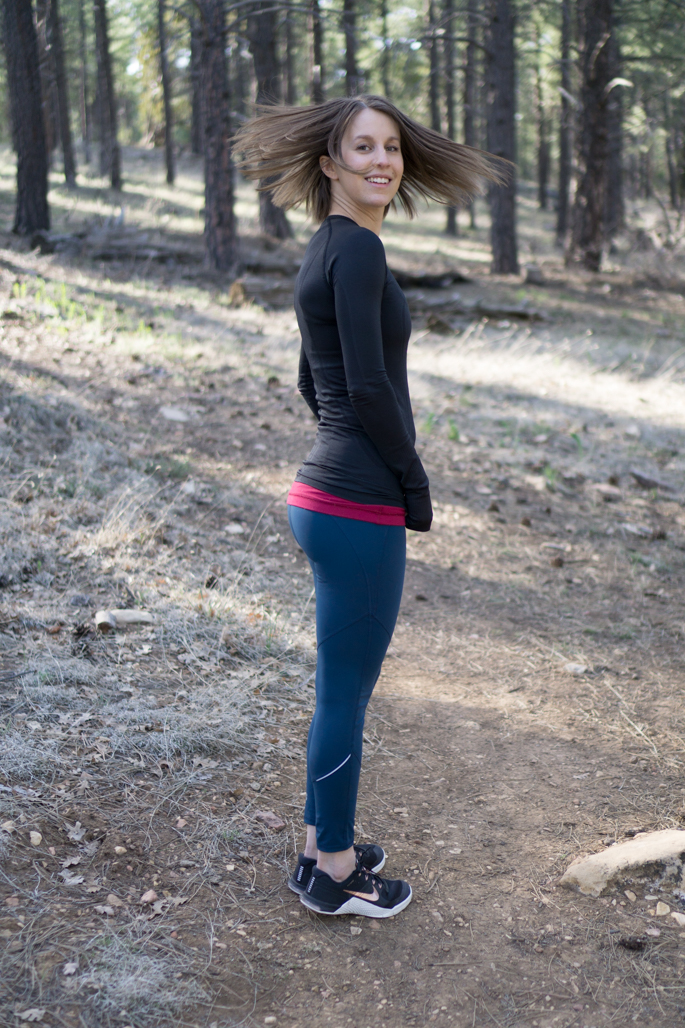 The helicopter hair flip: half win, half fail. 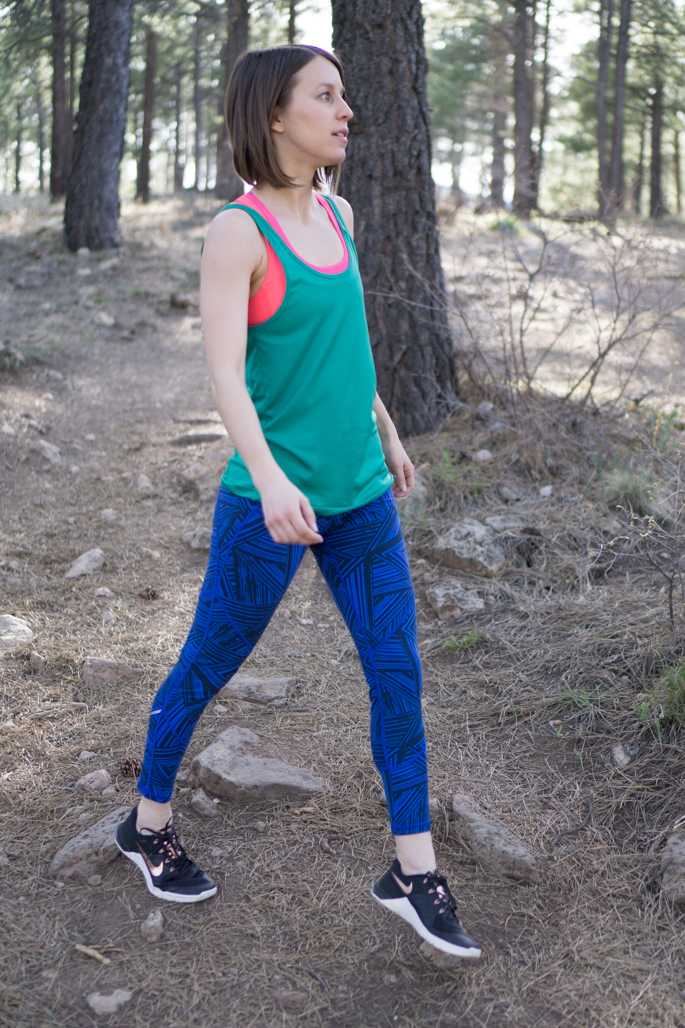 “Take a picture of me walking down this hill.”  Nailed it. 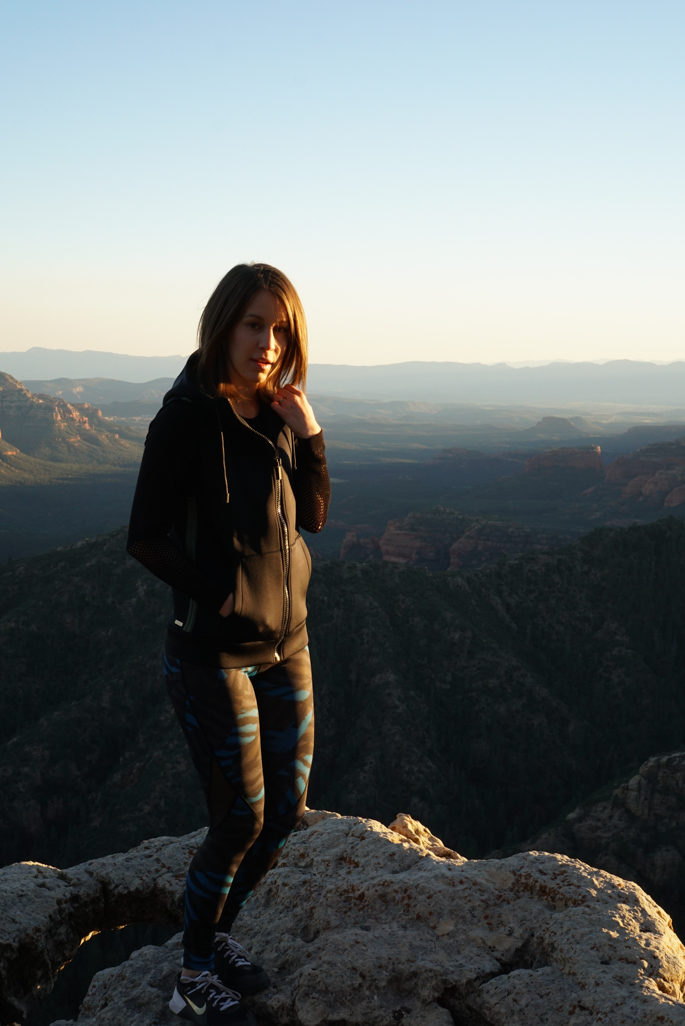 I had really high hopes for making this shoot look cool given the awesome location, but it was anything but seamless.  We drove an hour each way to this remote location down miles and miles of unpaved roads.  The first problem was that there were people everywhere, including at my preferred location.  It was a Sunday night so I was hoping the weekend crowds would have subsided, but no such luck.

The second problem was that the light ended up being awful, and not what I envisioned at all.  The shadows were way too harsh.  Not to mention, I made some amateur mistakes that just exacerbated the crappiness of the resulting photos.

We took over 300 photos and still ended up re-shooting 2 of the 4 outfits at a location closer to home.  Although I did manage to get some good photos here, it was nothing like I hoped or planned. 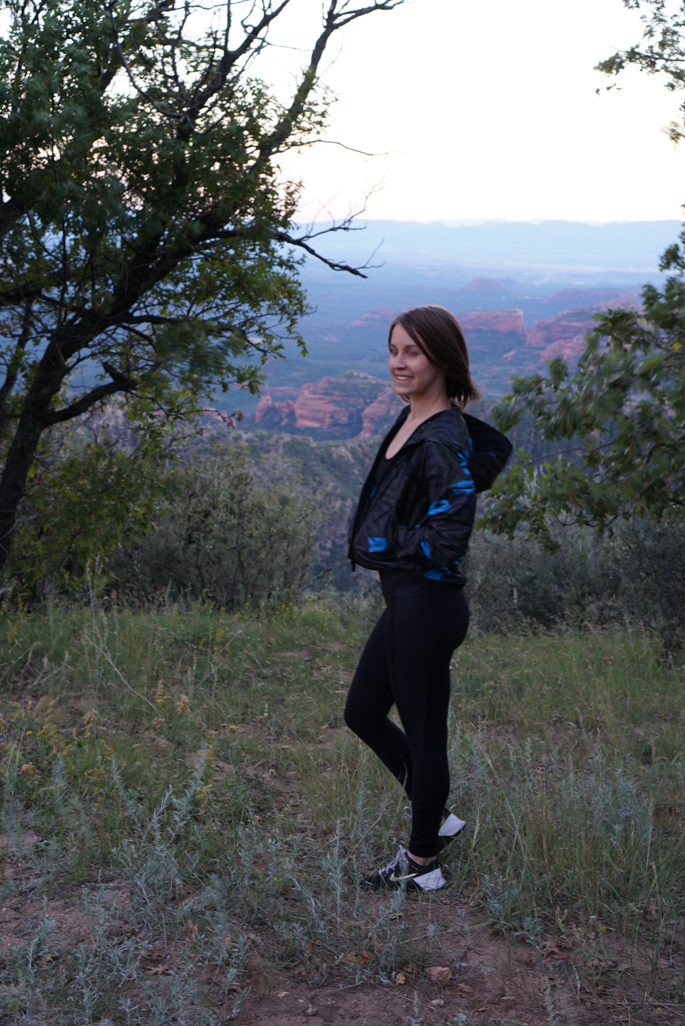 …Go on, try to tell me these last two photos aren’t the stuff of nightmares.

P.S. Side note: word on the street is that a lululemon warehouse sale will be happening at Fair Park in Dallas, TX on May 19-21.  Texan gals: keep your eye out for more info!  Thanks to reader KC for the heads up.