I was so excited about the new matching Beyond Yoga set I found on Revolve.  Static pink is new this season, and I always love a hot pink.  I was hopeful the strokes of genius bra would be a strappy yet supportive alternative to lulu’s free to be wild bra (which doesn’t accommodate my cup size) since Beyond Yoga’s listed their bra as medium support.  I decided to throw in the new heat wave mesh capris, too, since they paired perfectly with the bra and were a cute style on their own, too.

Revolve’s shipping was ultra fast as usual.  I ordered the set on Wednesday morning and the package was in my mailbox on Friday. 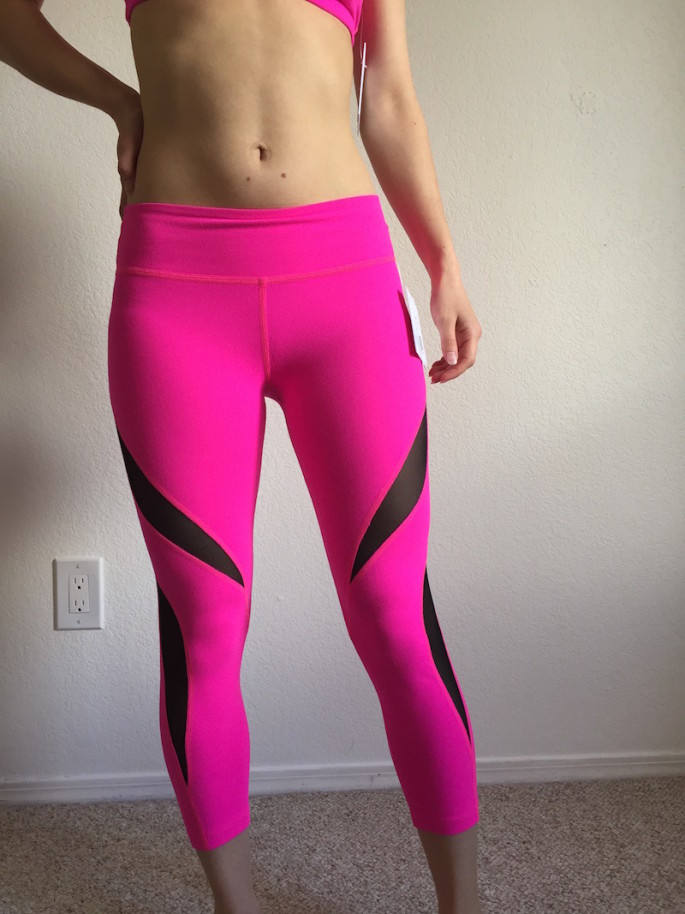 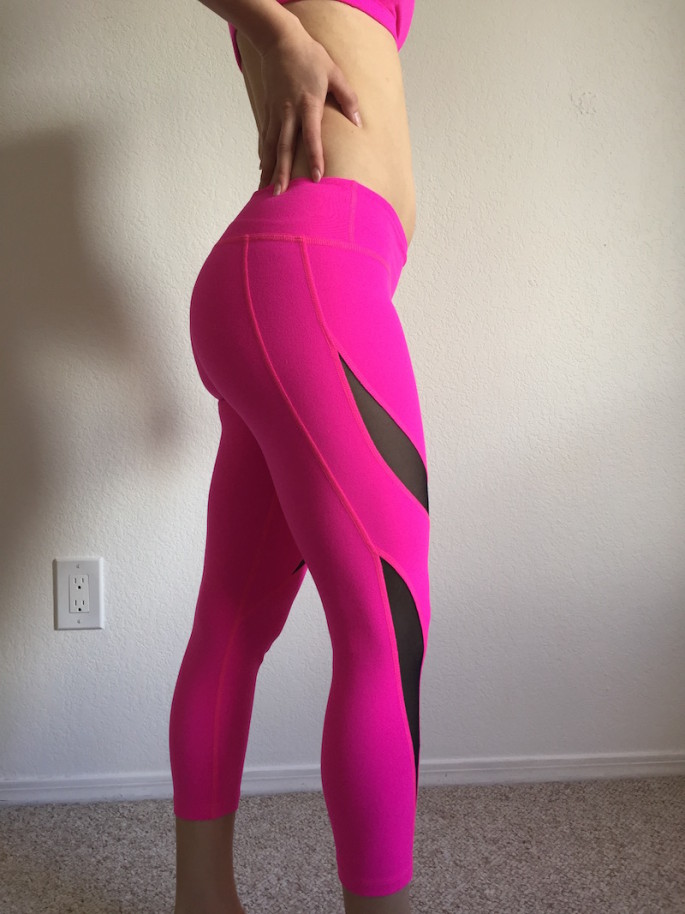 Let’s start with the crops.  I ordered them in an XS.  I normally opt for XXS when available; I’d tried Beyond Yoga’s XXS before, which had fit pretty well.  However, this style is only available in XS-L.  Since XS often fits me in other brands, I was hoping the size up would work out. 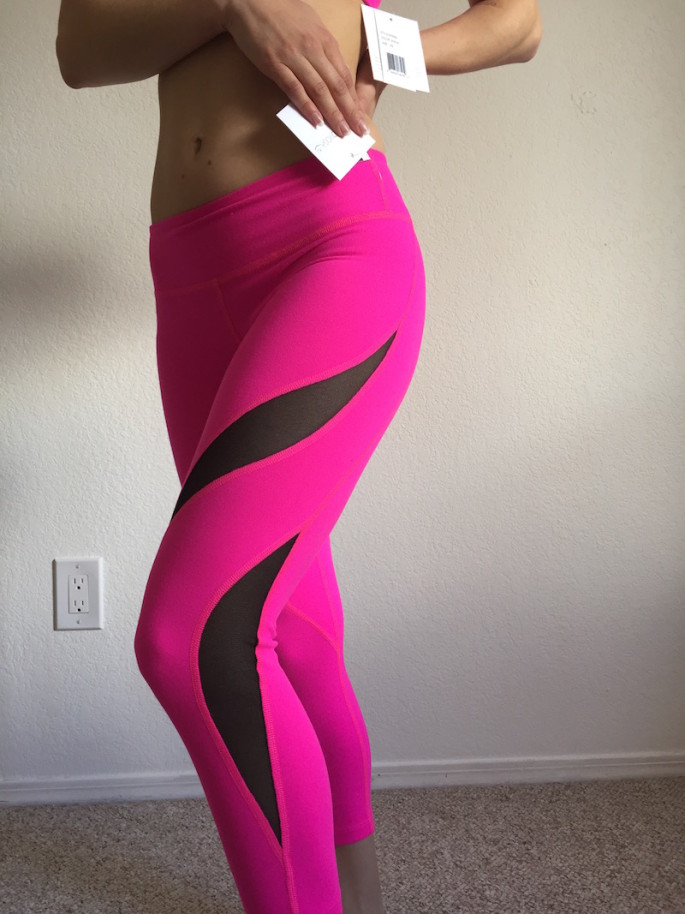 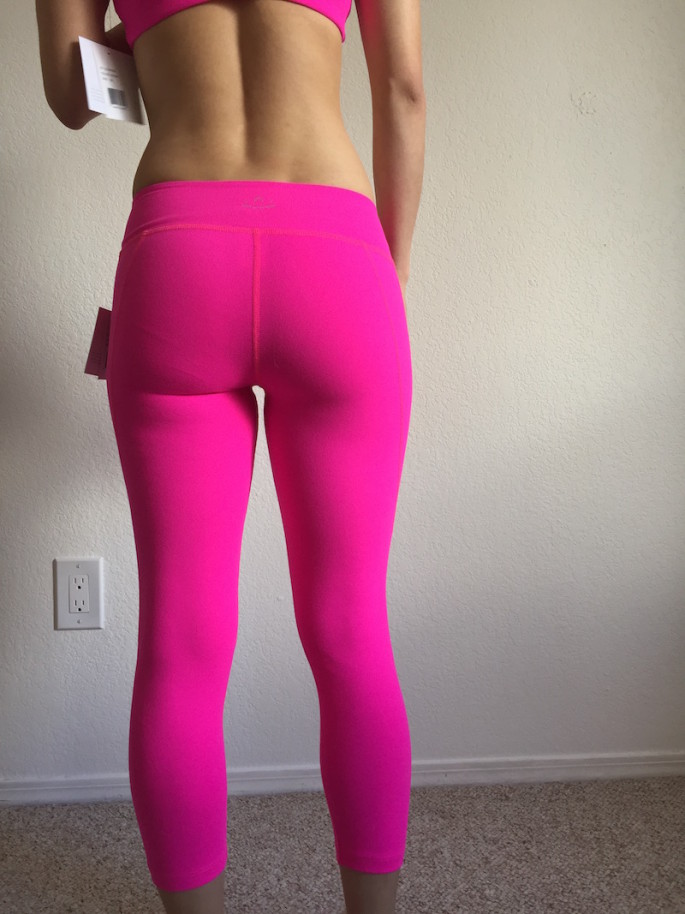 Although the style is indeed pretty cute on, they were completely sheer.  These left nothing to the imagination even while standing up straight.  My underwear were very clearly visible both in the front and the back without even bending over.  As you can imagine, a squat test did not go well either.  The fabric is supplex, which is usually thicker and cushier, but these were very thin both to the touch and to the eye. 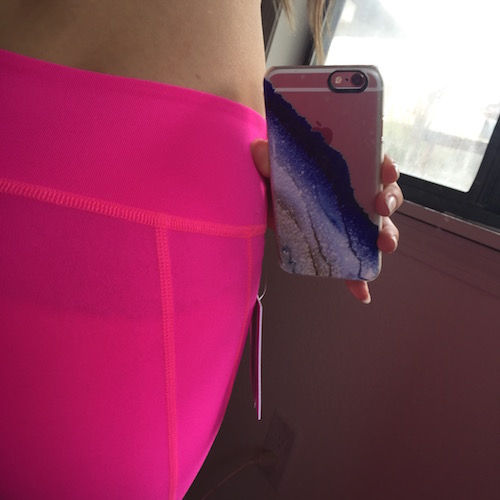 I don’t really like to post full-on sheerness pics because I don’t want to attract creepy people, but this shot should give you a pretty good idea of the sheerness level.  Beyond that, you’ll just have to trust me.  I wore full-coverage nude underwear for the other pics above so that you could see the fit without the indecency.

You might be wondering if switching sizes might help, but as I mentioned above, I sized up on these.  These actually felt a bit too big for me and they were still see-through.

The only positive things I have to say is that the style looks nice and the fabric was soft to the touch in spite of its thinness.  Although I’m occasionally willing to work around imperfect coverage, like a slight bit of sheerness in a deep squat, I draw the line at bottoms that are sheer standing up.  That plus the fact that these didn’t fit well made these an easy choice to return. 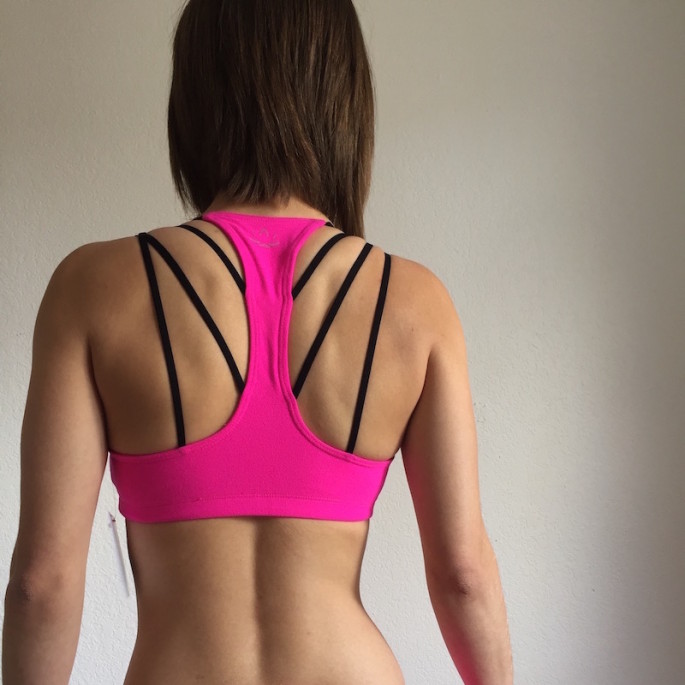 Unfortunately, things didn’t get any better when I moved on to the bra.  On the plus side, it’s cute from the back.  Although Beyond Yoga classifies it as medium support, I would say it’s light.  The black straps are a flimsier elastic than I expected.  They are flat, thin elastic, not like the round, covered straps you’ll find on lululemon’s strappy bras.  It’s also much lower coverage than I expected.  If anything, it might actually be less coverage than lulu’s free to be wild.  It really didn’t seem like more coverage.  The band wasn’t a great fit on me, either.  It didn’t gape, but it didn’t fit very securely either.  This size (XS) would probably be better suited to a 32 band.  If your rib cage is small for your size (mine is), I wouldn’t recommend this bra. 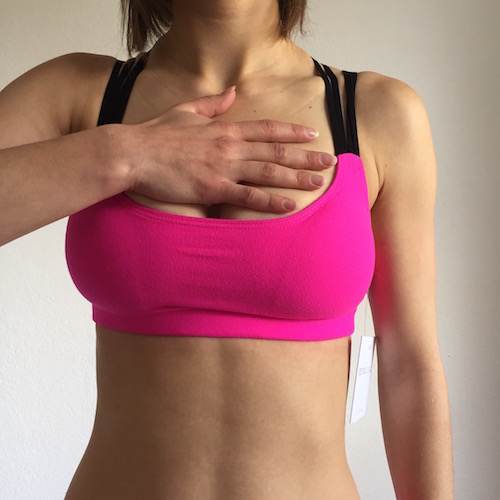 This picture is another awkward one since I’m again trying to keep it PG around here.  There was a lot of spillage on the top and it felt very insecure.  Another odd thing is that it seemed to pull everything outward in a weird way, as you can see in the photo.  I think the scoop was cut too wide, which threw off the look.  Besides not being practical, it was also very unflattering on me.  If you are quite small-busted, you might have better luck with this bra.  That said, I think even a B cup would be pushing your luck.

Overall, this order was definitely disappointing.  As you’ve probably figured out, I wouldn’t recommend either style, especially considering the prices are definitely not cheap.  I’ve heard lots of positive feedback for Beyond Yoga, so I’m disappointed and a little baffled that I’ve yet to have any success.  I thought these styles were so cute and was really hoping they’d be winners, so I’m definitely bummed to write such an unfortunate review.  Money saved, anyway!