Lots of fashion designers have been grabbing for a piece of the activewear trend pie lately, and some of the resulting pieces have caught my eye.  Since I’m always trying to scope out new brands, I decided to give some a try.  Specifically, I ordered Trina Turk’s Bermuda leggings in pink berry and Rebecca Minkoff’s Raegan leggings.  Here are my thoughts. 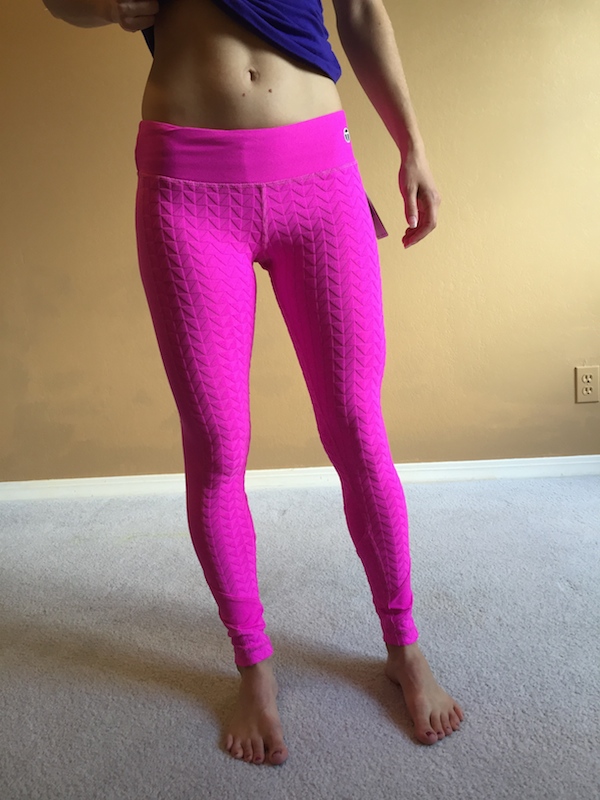 Initial thoughts: SUCH a vibrant color.  The hot pink was what drew me to order these in the first place, and the bright pink did not disappoint in real life.  These also come in black, but that just didn’t have the same allure. 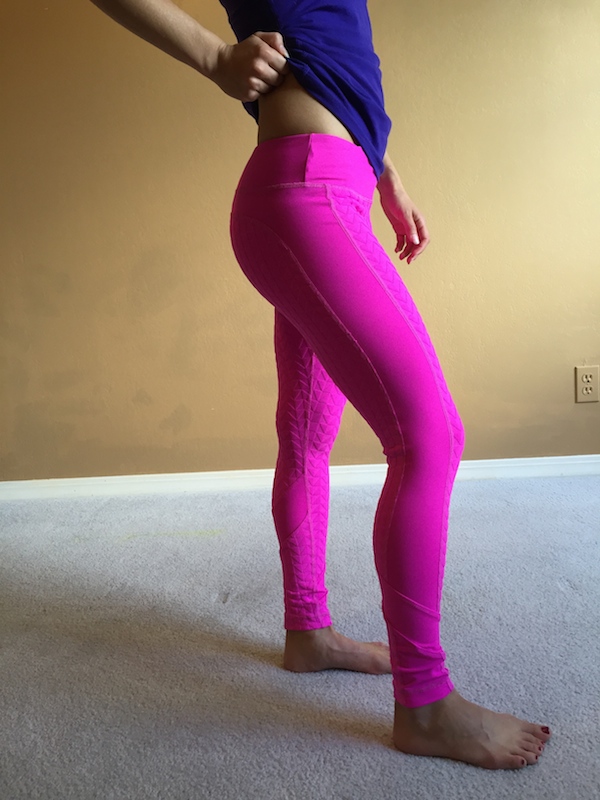 They fit pretty true for a size XS legging, maybe on the smaller side (but not quite as small as a lululemon size 2).  Nordstrom marks the XS as good for size 00 and 0 (street size), and I agree with their assessment there.  The rise is a hair lower than a lot of my active bottoms, but not so low that it felt like it would be a problem. 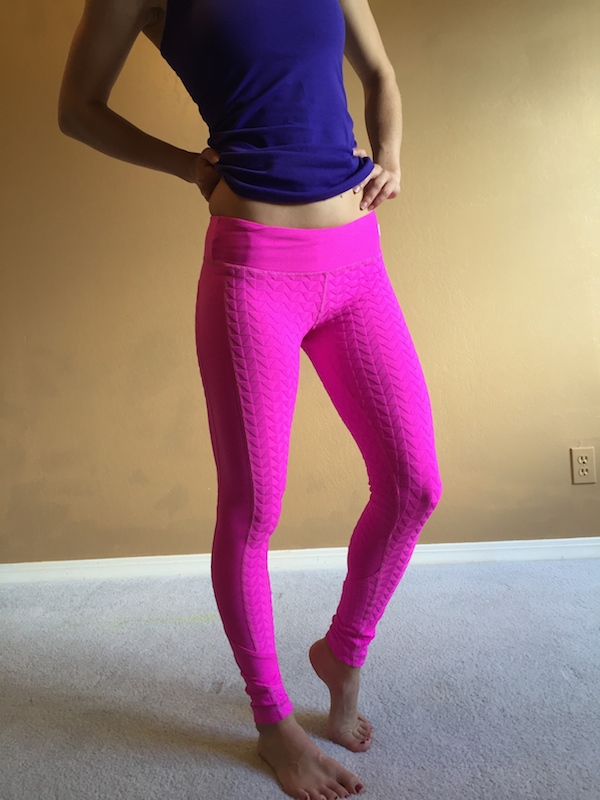 There’s a raised rubber logo on the front left side of the pants (it’s on the opposite hip of what’s in this pic–oops–but you can see the white edge of it).  It’s a small gripe, but I don’t love it there since it would be a lump underneath shirts–a logo that sits more flush is nice.  The pants also have your garden variety waistband slit pocket, but no other pockets. 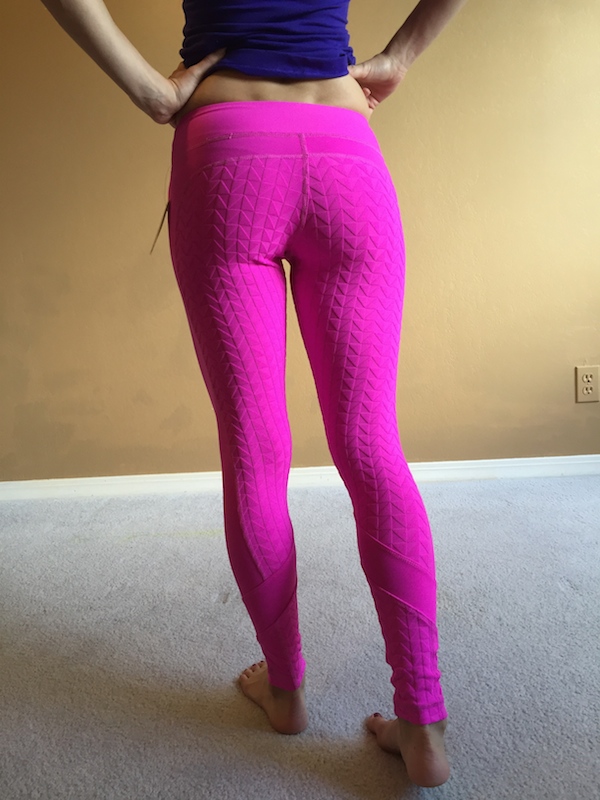 They are full length, but not excessively long.  At 5’3″, I have a tiny bit of ankle bunching to spare.  If you’re taller, these might end up more like 7/8 length on you.  The length is a positive in my eyes, since if they were longer it would’ve hidden the styling at the low leg. 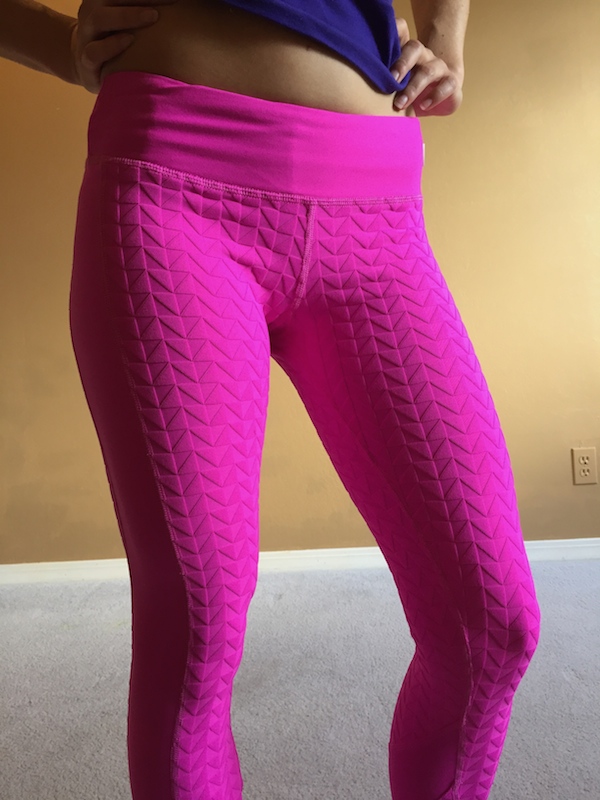 The fabric is partially a nylon/spandex blend and partially supplex.  It’s soft, but not too cottony.  The main body of the pants with the triangle pattern is actually a textured fabric.  It’s a cool pattern, and the texturing is a big part of what attracted me to try these pants. (I was also hoping the texturing would mean thicker fabric to help with the sheerness issues that are common to lighter pants.) Also, points to Trina Turk for doing something more unusual.

Now for the bad news…

They’re sheer!  I initially tried them on with dark colored underwear, and you could see them standing normally at the panels directly above where the textured triangle part ends.  As I’m sure you can imagine, the squat test did not go well either.  The textured parts are a little thicker than the plain bits of fabric, but still not enough to pass the sheerness test. 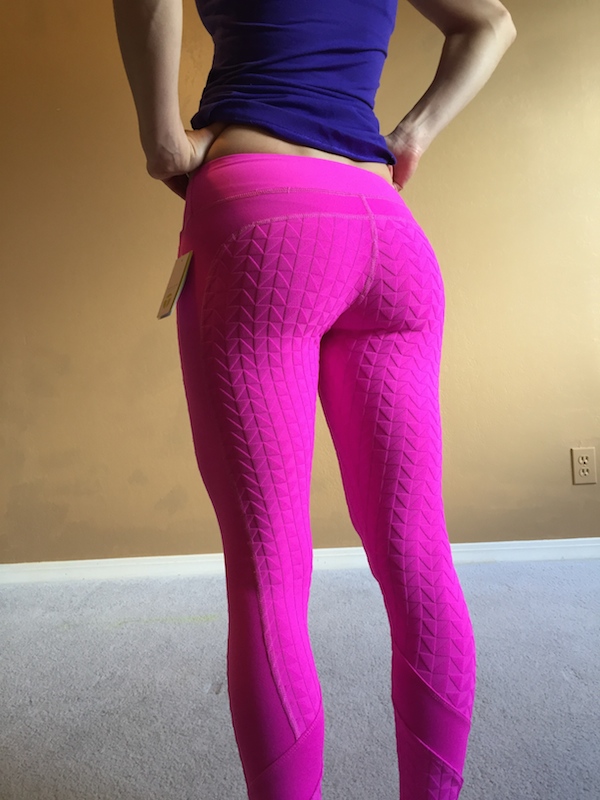 On a similar note, the fabric felt quite revealing overall.  The slightest little wrinkle in my underthings was visible, and in general looking at myself in the mirror, they looked like they clung in ways that felt like too much to me.

If these weren’t sheer and generally revealing, I probably would’ve kept them since they fit well and are pretty cute.  But ultimately, the decision to return ended up being easy. 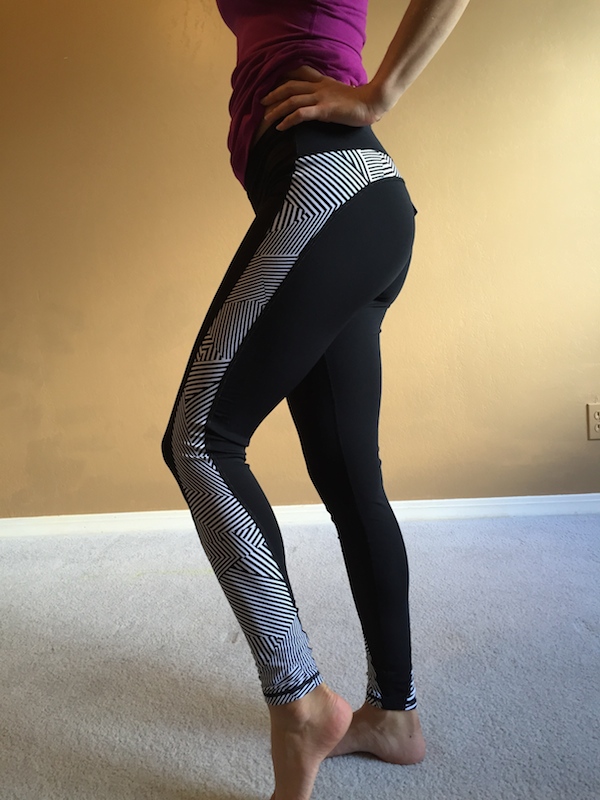 Next on the docket, a run tight style from Rebecca Minkoff.  They’re called the Raegan leggings, and I was attracted to these for the paneling on the legs.  The pattern spices up an otherwise plain pair of black tights but still means they’ll match pretty much anything.  The seams stay out of the way of your knee joint, so you don’t sacrifice comfort or function for the added panels. 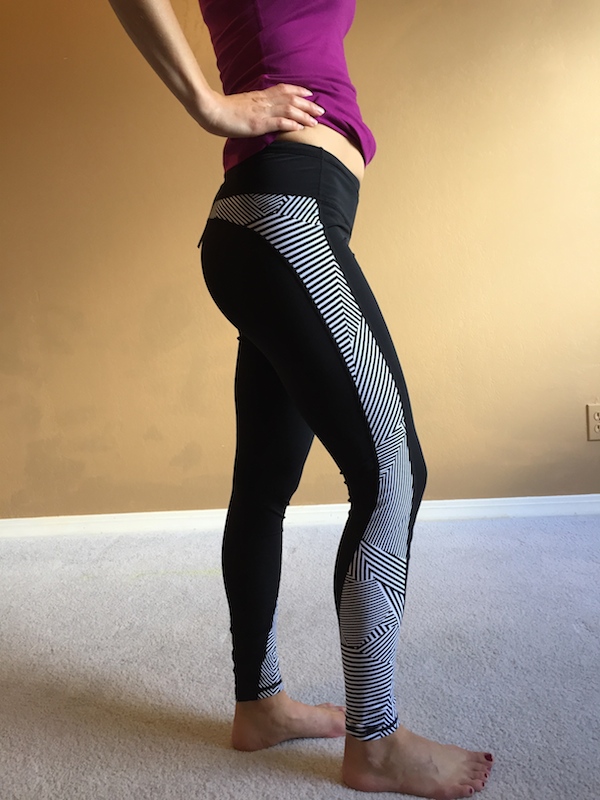 My first reaction when I pulled these out of the package was how thin the fabric felt.  I immediately assumed they were going to be super sheer.  The fabric is a slick running/high-intensity fabric, like lululemon’s luxtreme. 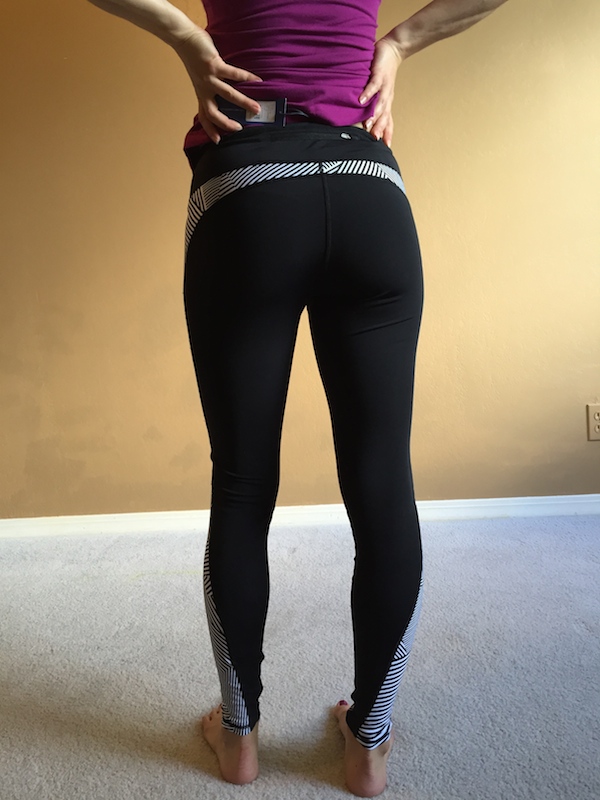 Then, when I pulled them on, I was in for another surprise: these run big!  Although they aren’t actively falling down, there’s this saggy sort of feeling when you’re wearing tights that are too big, as opposed to feeling like everything is nicely in its place.  If you’ve tried something that’s too big, you’ll know what I mean.  They just felt very wrong, fit-wise, and I know if I tried to work out in them, they would slide down and around like nobody’s business.  In these pics, you can see that there’s a bit of wrinkling due to the extra fabric.

Granted, a pair of tights being too big for my body type doesn’t mean they’re necessarily bad, but it’s hard to make an informed comment about much else when fit kind of ruins things. 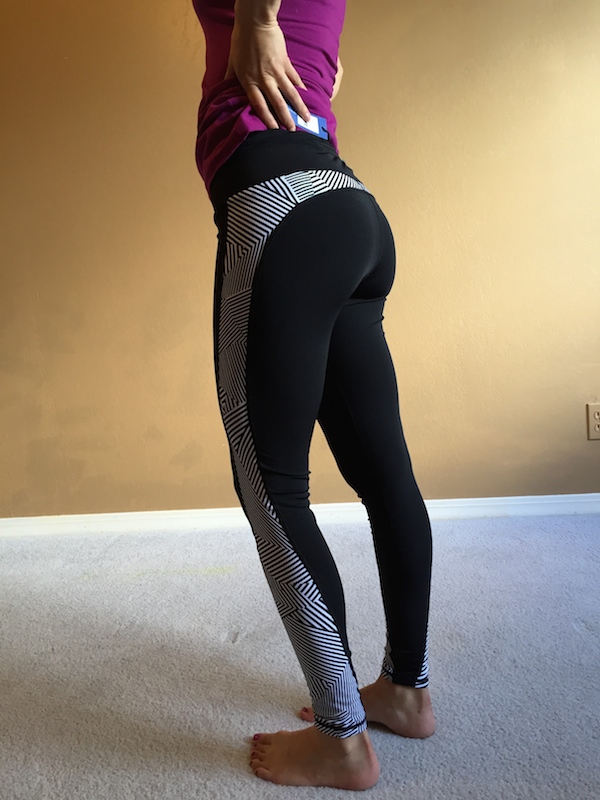 Interestingly, these managed to pass the squat test for sheerness, despite my initial misgivings about the fabric.  I’m not sure if sheerness would rear its ugly head if the fit was better. 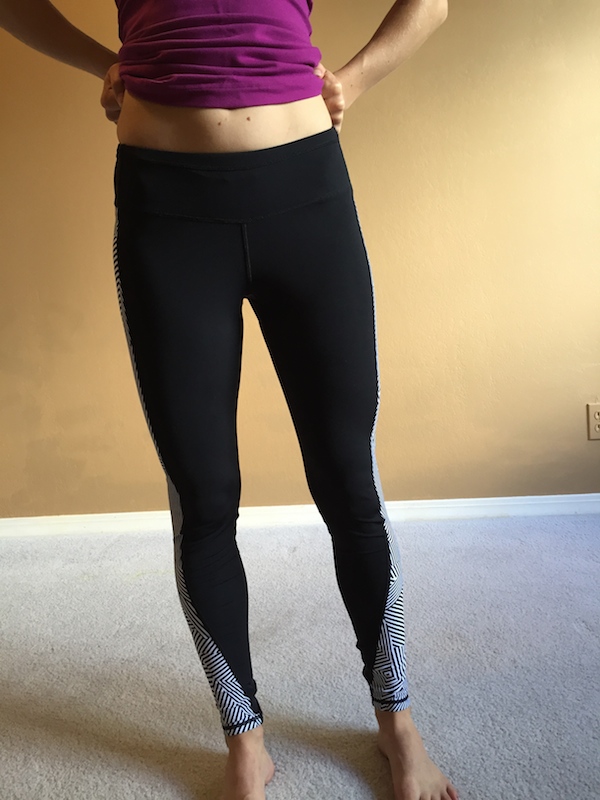 The length is similar to the last pair: full length on me without a lot of ankle bunching.  They’re your average mid rise, not too high and not too low.  There’s a continuous drawcord at the waist and a zippered back pocket.  In the pics online, the zipper is white, but it’s actually black on the pair I received.

Overall, these are an easy “nope” for me.  The pattern accent is basically the one thing I really liked about these, but it’s not enough to make up for the fit problems, especially since they come with a hefty $128 price tag.

This wasn’t a successful run for me, but if you’d like to check these out for yourself, you can find them here: