My reversible Vimmia speed tights in python from last season were one of my favorite purchases.  They’re a great quality fabric and the style fits me like a glove.  This season, Vimmia released the speed tights again, this time in a new speckle print.  But since the fabric on my other pair is quite thick, I decided to try out the splice capris in the same print instead in hopes it would be more amenable to warm-weather workouts. 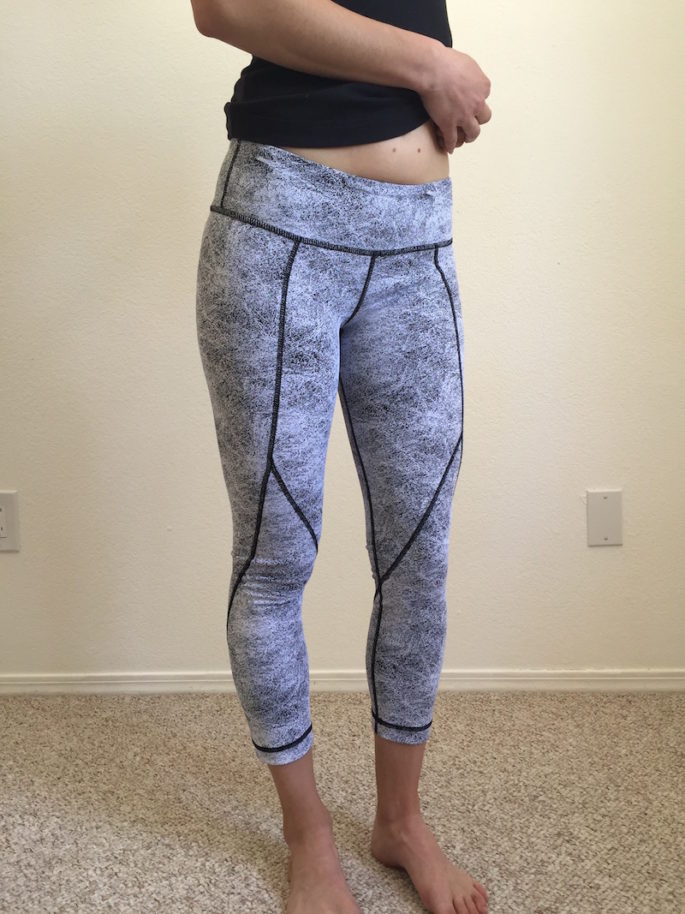 Just like the python print, these are made of a thick, compressive, smoothing fabric.  They are completely and totally opaque.  As I alluded to above, you might find them a little heavy for summer, especially if you’re someone who tends to overheat during workouts. 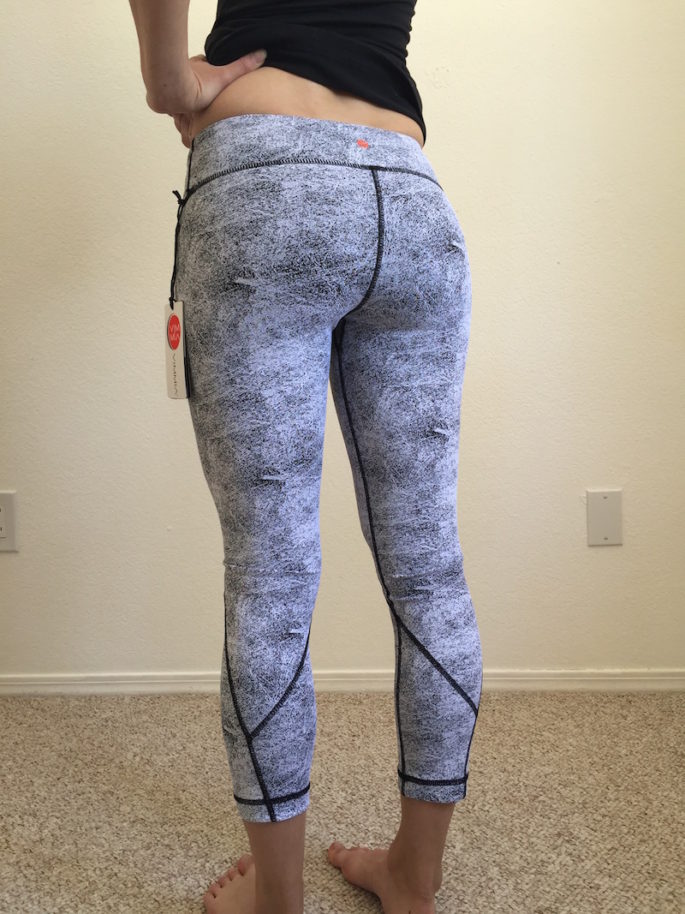 I found these to run a bit small.  The XS fits me extremely well, similar to a size 2 in lululemon.  The XS may also fit a lulu 4 as well, though expect some shimmying and quite a bit of compression.  If you’re in between sizes, I recommend going with your larger size.  The rise is low, but does provide enough coverage.  They’re a long crop on me, and you can see just a hair of looseness at the hem since I’m on the short side.

They are also fully reversible to a darker version of the print, but personally I feel like they look best with the lighter side out.

They had a slight chemical smell coming out of the package, but it dissipated very quickly.  So, if you get a pair with a funky smell, just let them air out for a bit.  It’s nothing to worry about. 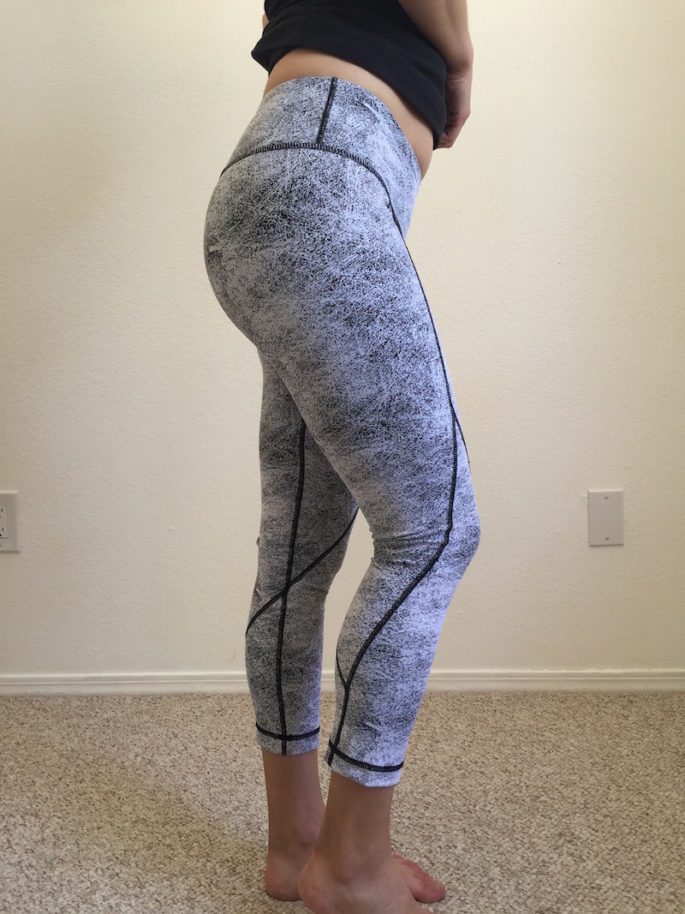 I also noticed that the speckle print seemed to feel slightly rubbery to the touch versus the python jacquard.  Although they’re a similar thickness, the fabric was just slightly different to the touch.  That said, since my python pair has been washed and worn numerous times, it may not be a fair comparison.  Perhaps the speckle print would soften up after a few washings. 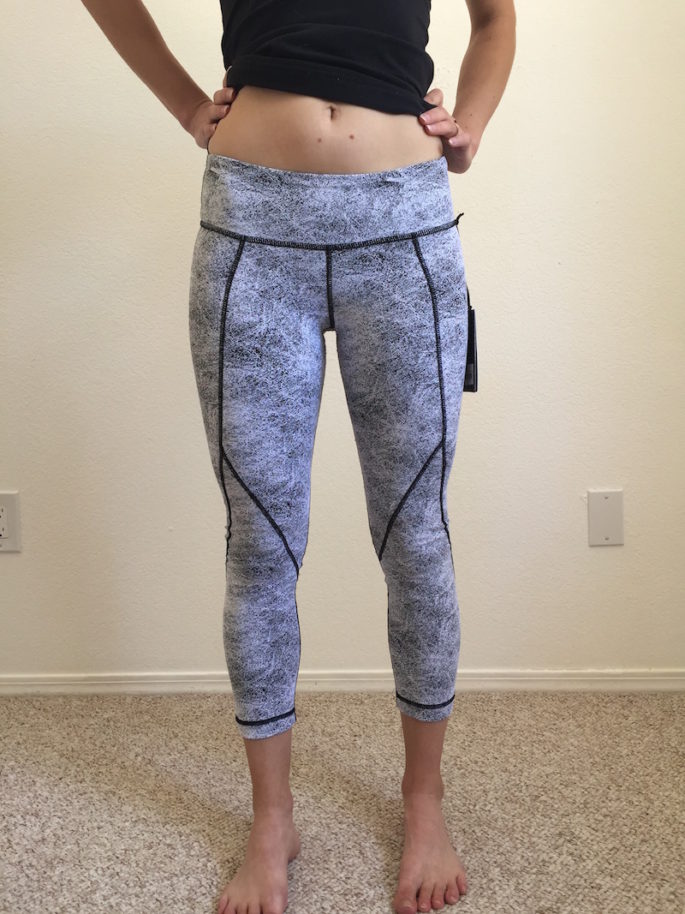 The major issue I had with these is the front seam.  As you can see in my pics, there’s a seam that runs from the outer quad to the inner knee.  It cuts across my knee a bit.  Because the fabric is thick and compressive, that makes the seam particularly noticeable.  Unfortunately it just wasn’t comfortable on me.

Ultimately, the knee seam was the dealbreaker for me.  I would definitely prefer the full length speed tights over the splice capris.  The fabric is more appropriate for full length (though not til the fall!) and the speed tights don’t have the knee seam issue.  If you’re a taller lady and like thicker fabric, the splice capris might work well for you.  Despite the fact that both of my last Vimmia purchases didn’t quite work out, my overall impression of Vimmia is still very positive.

You can find the splice capris from Bandier and Backcountry.  Backcountry has a green-toned version (“ambrosia”) as well.

If you’d like the full length speed tights in speckle print instead, you’ll find those at Carbon38, Saks, and Revolve.