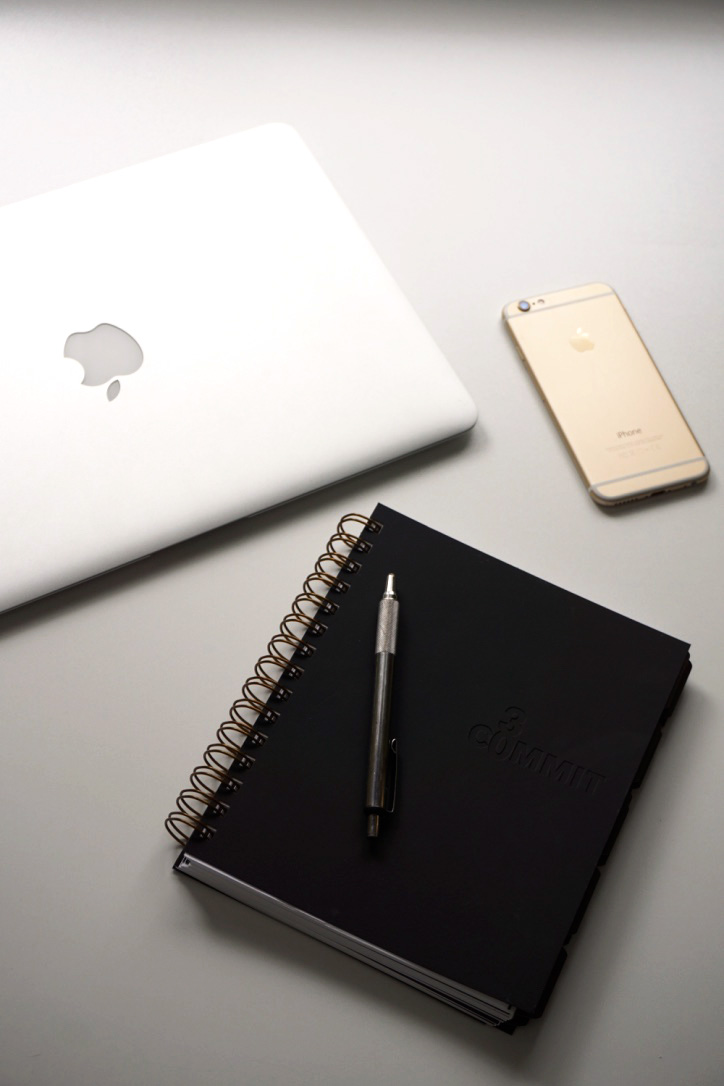 I was trying to decide what kind of planner I wanted for 2016 when I stumbled upon the Commit30 planner a few weeks ago.  My interest was instantly piqued.  A goal-oriented planner?  As a type A person, of course I wanted to check that out.  Then, I was browsing the photo gallery when I saw this photo.  The reward written in for a month of yoga was “new Werkshop pants”.  Aha!!!  A kindred spandex-clad spirit.

I reached out to say hi, and Jenny, the founder of Commit30, sent me a complimentary copy of the planner to try out and review.  It’s still 2015 (obviously!), so I haven’t gotten to use the planner to its fullest just yet, but I’ve started working on ideas for the new year.

Lots of goal-setting, habit-forming gurus emphasize the effectiveness of focusing on one goal or new habit at a time.  Although it’s tempting to try to do everything at once, this often means you get overwhelmed and make zero progress.  By taking a focused approach, you can actually bring about significant change in your life faster than you think since you’re more likely to be successful.  They also say that a month is often just the right amount of time: it’s long enough to reinforce the new mindset, but short enough that it doesn’t seem too intimidating.  Telling yourself you’re going to go for a run 5x/week for just a month is a lot less scary of a change than saying you’re going to run 5x/week forever.

The Commit30 planner is built around these ideas, and incorporates a worksheet with planning aids and self-accountability checks for each month of the year.  Also, much like you work out harder when you have cute workout clothes, having a pretty planner helps inspire you stay organized and motivated.  It’s definitely been true for me!

The possibilities for what you could commit to each month are pretty much endless, but here is my plan for the first 3 months of 2016: 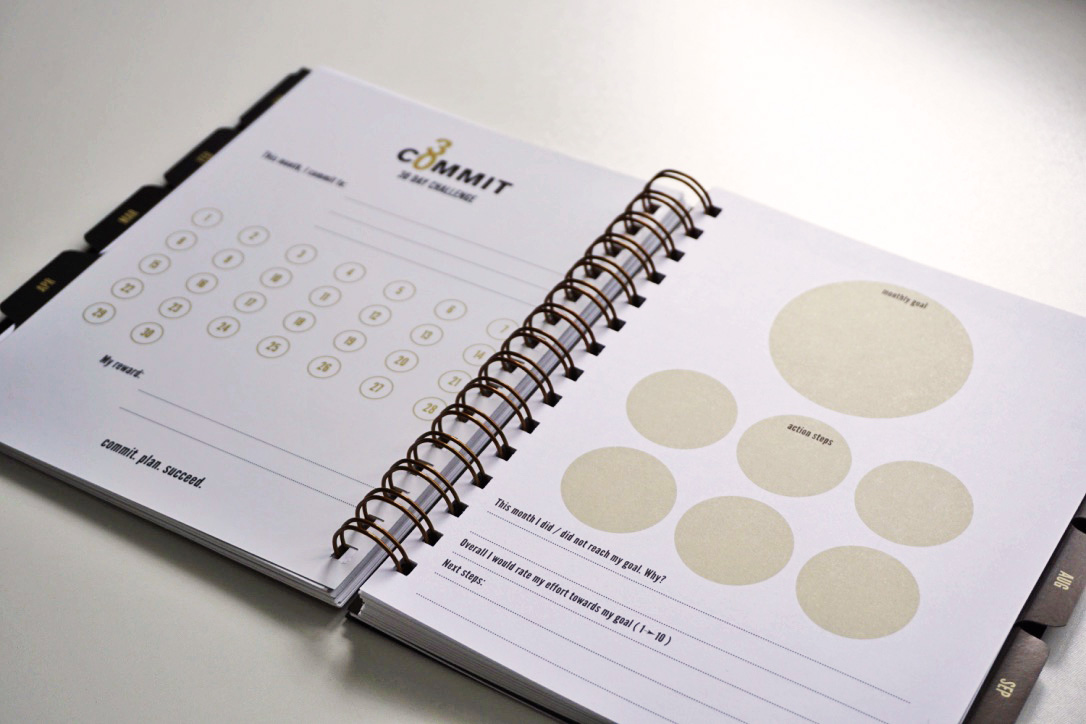 To kick off the year, I will commit to a tidying habit.  I always thought of myself as a very neat person.  I love organization and clutter-free zones. …But then, here I am typing away in my office with a closet full of random boxes and a big pile of activewear heaped next to me waiting to be photographed, returned, or put away.  And don’t even get me started on my bedroom closet, which is basically a gigantic heap of everything I’ve worn for the past week (or more??).  Basically, I always feel too preoccupied with something and often don’t take the time to actually clean up after myself.  Then, as the mess accumulates, it takes more time to clean, I’m less likely to do it, and my spaces end up looking like a war zone.  Instead, I end up spending some portion of the weekend on long cleaning sprees managing the wreckage from the week.  I think I would feel better if the space around me was neat and tidy on an ongoing basis, instead of just for a day each week.

So what will the tidying habit look like?  Most importantly: if it takes less than 2 minutes, I do it RIGHT AWAY.  After I eat, the dishes go in the dishwasher, or I wash them by hand.  When I get home from the gym, the clothes in my bag get put away as soon as possible (greeting and walking my dogs first is acceptable).  When I get ready for bed, those clothes get folded or hung right away, too.  When I get deliveries like new activewear, I will fold or stack the clothes and packaging neatly on my office table until any keep/return decisions have been made and any necessary pictures have been taken.  Anything that takes more than a couple minutes to do can be delayed a little while, but I should try to make sure that by the time I go to bed each night, the house is tidy.

For month #2, I’ll be doing something a little different, a sort of un-habit: the dreaded spending ban.  That’s right, for the month of February, I will make absolutely NO unnecessary purchases.  That means no lulu, no eBay, no Alala, no nothing.  I don’t care how cheap or cute it is, if it’s February, I’m not buying it.  Unless I’m buying groceries or paying bills, I will pause before any and every purchase and ask myself “do I really need to spend this money, or can I do without for now?”

Much like your actual muscles, the muscles of self-discipline and willpower need exercise, too.  Every once in a while, I find it very useful to do a total spending freeze.  There are lots of benefits, but one is that I find it helps to “reset” my thought patterns on what I truly need.  It reminds me that what I have really is just fine, and that my world really won’t come crashing down if I miss out on some cute speed shorts.  I find that after I wait a couple of weeks and the ban has lifted, most of what was on my wishlist actually doesn’t even tempt me anymore.  All this does wonders for the ol’ bank account, too!  If you’ve never done a spending freeze, I encourage you to try one.  February is the shortest month, so it’s a good time to try. ;) I’ll be talking about this a little more as we get closer to February! 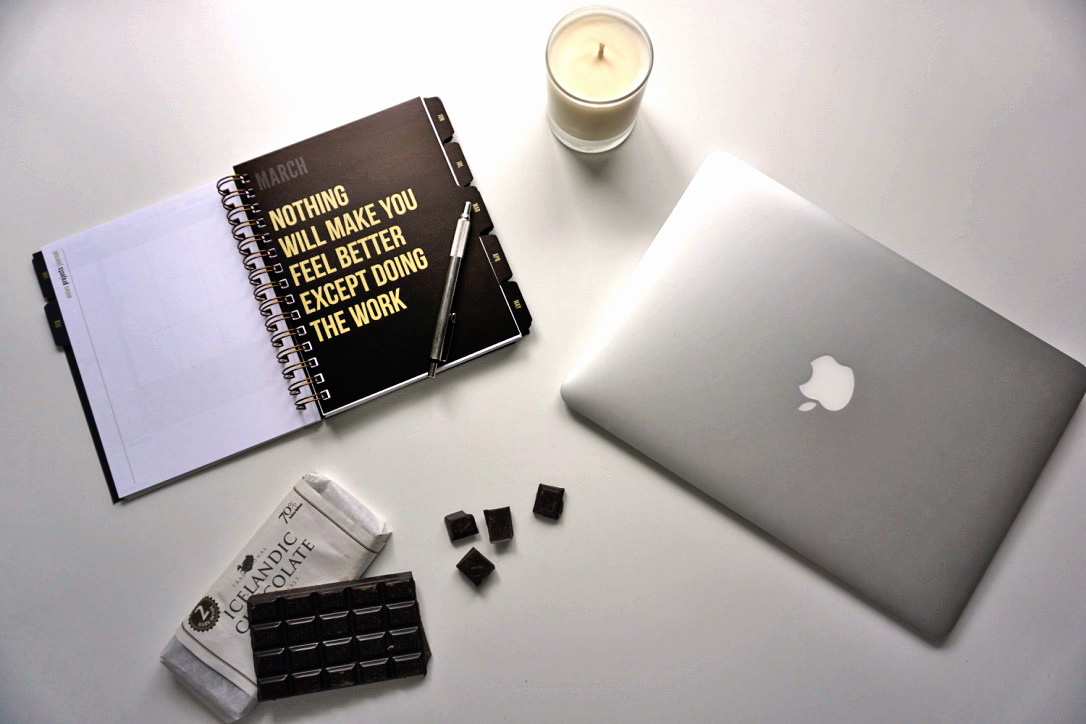 For March, I’ll go back to a more traditional goal, but this one will be especially challenging for me.  For March, I want to experiment with a strict diet plan.  There are definitely things that make me feel sluggish, bloated, or otherwise crappy, and yet I still eat them.  Some weeks I eat healthier than others, but I’ve never truly cut them out for any useful amount of time.  By totally eliminating the suspected culprits, I can get a solid handle on how much of an impact my diet is really making on how I feel and how I perform.

It’s always been hard for me to follow a “clean” diet since I’m plagued by the unfortunate combination of being a picky eater and having a low appetite.  Basically, restricting food groups usually means I wind up not eating enough.  With my lifestyle, body type, and exercise habits, I can’t afford to not get enough calories.  So, in order to pull off a strict month, I will need to carefully plan my meals and food purchases to be sure I’m getting enough food.

My clean eating month will be a little bit like a wimpy version of the Whole30.  I won’t eat wheat (other grains are ok in moderation), alcohol, sugary drinks, dairy, or pre-packaged/processed foods in general.  I’ll try to avoid most added sugars where I can, but things like chocolate or “clean” treats are allowed in reasonable amounts.

As for the rest of the year, I don’t want to stress myself out by feeling like I have to plan all 12 months at once.  I don’t want to get overwhelmed, so I’m focusing on creating a well-thought-out plan to succeed in my first three months before I worry about the rest.  After I get through a month or two, I’ll take time to revisit my plan for the following months.  Some of the ideas in the back of my mind are flossing, restarting my daily home yoga practice, and reading. 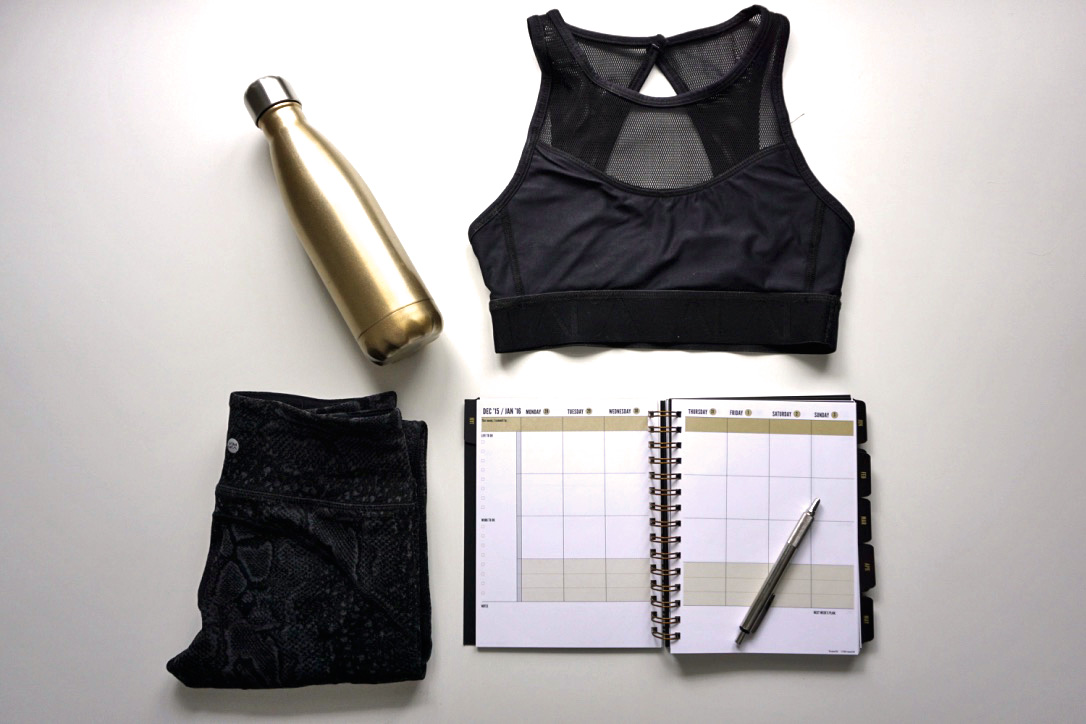 For 2015, I used Whitney English’s Day Designer.  It’s a very popular and well-designed planner.  It was also my very first “fancy planner”.  While I used it almost every day, I found that I often ended up with mostly blank pages and didn’t utilize most of its many, many features.  Basically, it was just a little too much planner for me.

To that point, I like that the Commit30 is a bit more simplified compared to the Day Designer.  One difference between the two planners is that the Day Designer had a monthly and daily view, but no weekly view.  The Commit30 planner has a monthly view and weekly view only instead of daily pages.  The Commit30 weekly view is a little more free-form: the day is broken up into three sections, and you can write either scheduled events or to-do lists in the space for each day.  It also has space for weekly work and personal to-dos, which is something I wanted but couldn’t figure out how to implement in my previous planner.  If you want to see how all this looks in more detail, there’s a lot of helpful pictures of the planner layout on their website.  My thinking is that the overall format means I’ll use more of the space, rather than leaving big chunks totally empty like I did this past year.

Compared to my Day Designer, the Commit30 planner is quite a bit smaller in width and height, as well as thinner since it has fewer pages.  This makes a huge difference in the end: I weighed the Day Designer on my kitchen scale and it was over 2 lbs, while the Commit30 planner weighed in at only 15 oz.  The size means it’ll be much easier for me to carry it in my purse on a regular basis.  The only downside of the planner I’ve found so far is that the black cover, while pretty and light, does tend to show scuffs and imperfections easier than a hard cover would.

Overall, I think this planner will be just right for me.  If I hadn’t been gifted the Commit30 planner, I like it well enough that I would’ve bought one myself.  The planner is normally $50, but you can snag one on sale for only $35 from now til Christmas.  In the world of designer planners, this price is quite affordable.  If you’re like me and love the idea of challenging yourself with new habits and goals, this is a great tool.  Here’s to a productive 2016!