For their first product drop of 2015, Splits59 rolled out a new design of their nova capris, dubbed the nova trailblazer performance capri ii.  The nova trailblazers of 2013-2014 are one of my favorite designs, so I was eager to see how updated version measured up.  I got the heather grey/white/blue jean/midori version.  To start, I’ll review the high points of the pants on their own, then I’ll move on to a comparison of the nova ii versus my original novas. 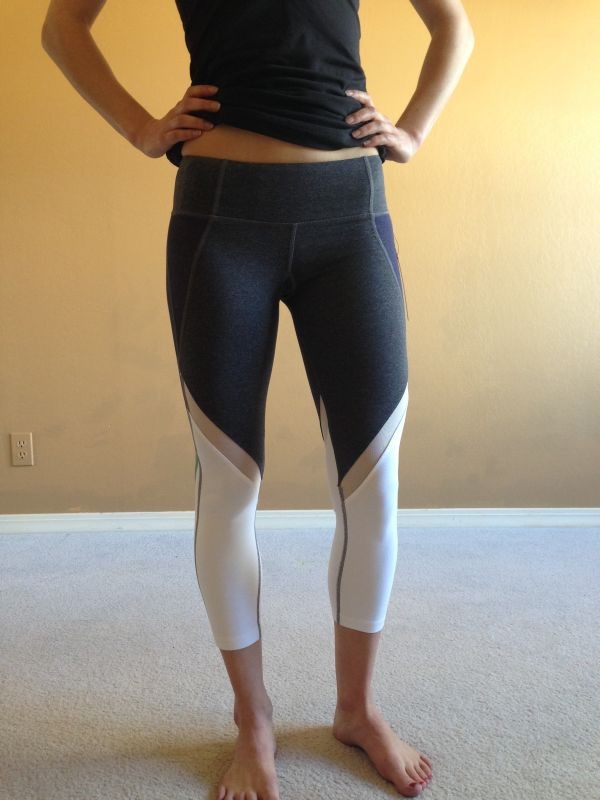 Overall, the design looks nice and is flattering, as I’ve come to expect from novas.  I ordered an XS, my usual Splits size.  I wear a size 2 in lululemon. 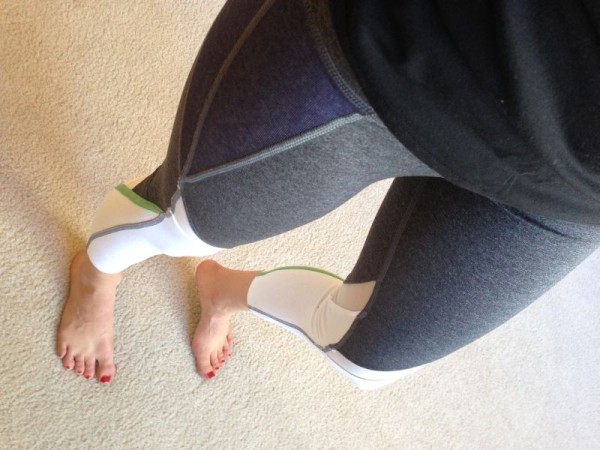 The denim blue panels at the hips were much less obvious than I thought they would be–I didn’t think it was really noticeable from more than a few feet away. 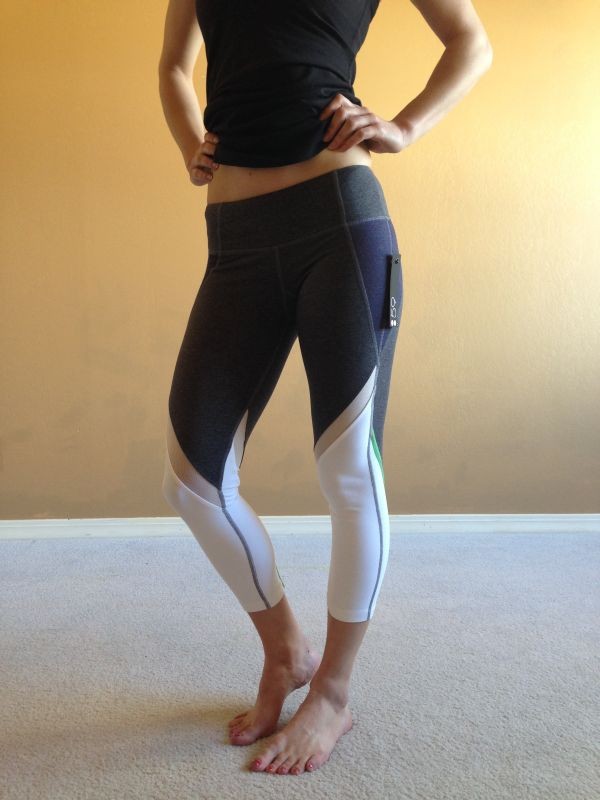 I found the seam where the mesh is inlayed to be just a tad scratchy.  Nothing too terrible, but something I noticed.  Not sure if this would soften up after a few wears/washes.  Since I’m short, this seam hits at the top of my knee, where there’s a lot of movement, so I think this wouldn’t be as noticeable on a taller person. 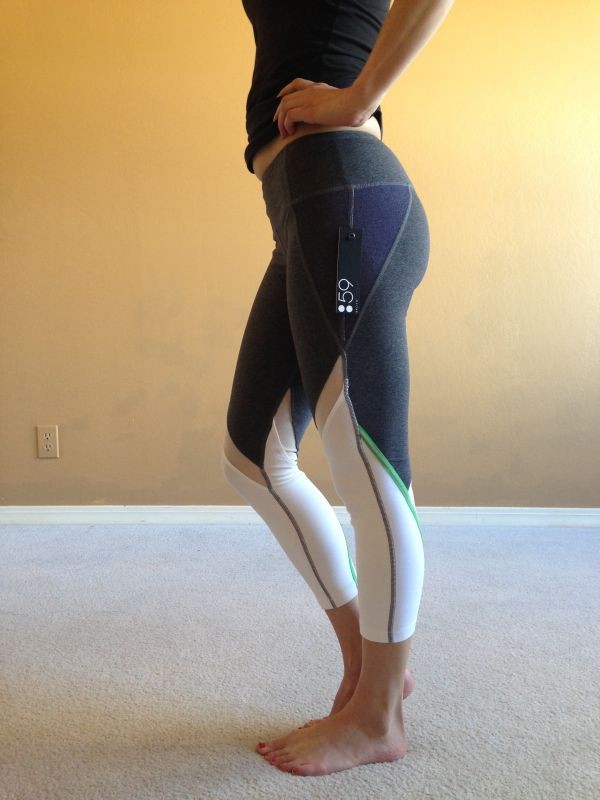 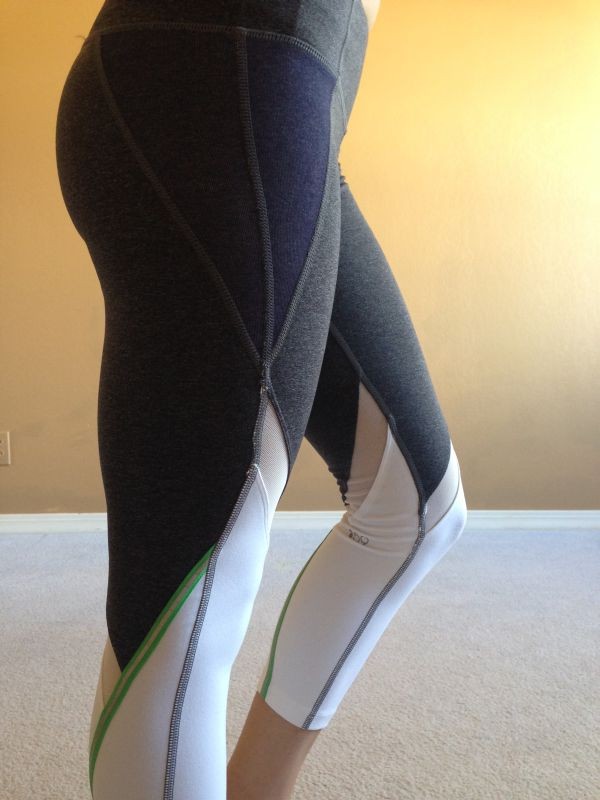 There’s a *lot* going on in the side view.  I noticed there’s some irregularity in the stitching here from all the different seams and panels meeting. 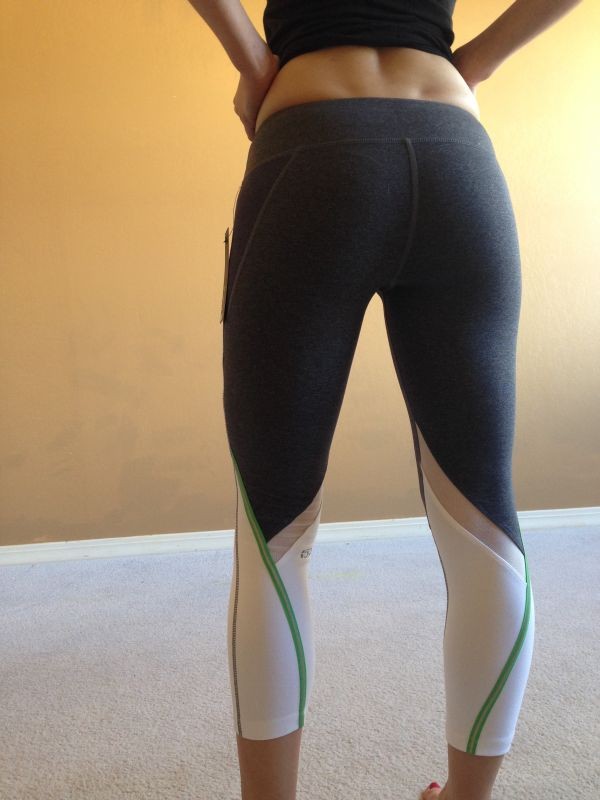 The heather grey fabric was mostly ok, but not quite 100% opaque.  I don’t recommend bright colors underneath, but nude or grey undies will do the trick.  I noticed the fabrication is a blend of nylon and polyester, so the poly may be to blame here.

On to the comparison:

(Note: I’m using the fall 2014 trailblazers in hype for comparison.  If you want to see pics of what these look like worn, you can find them in a review I posted about them.) 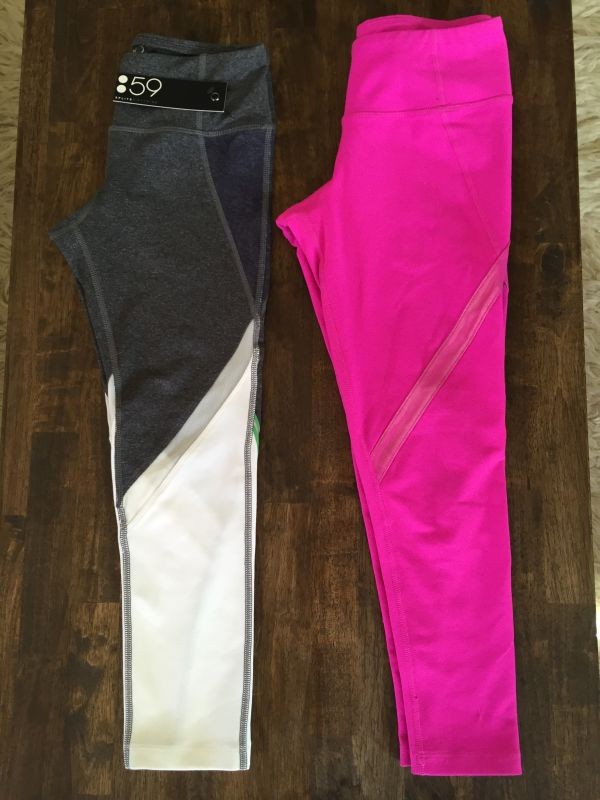 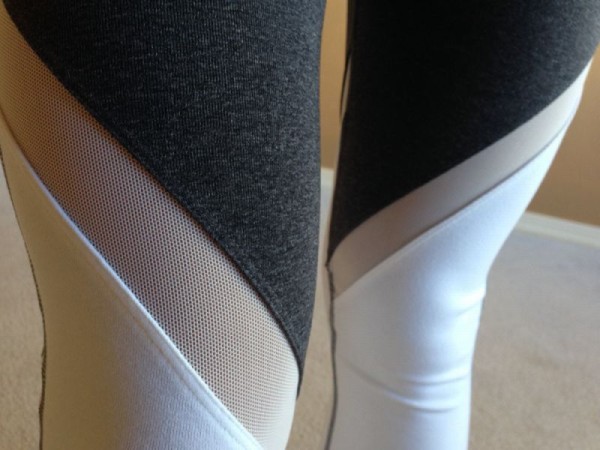 Closeup of the power mesh inserts. 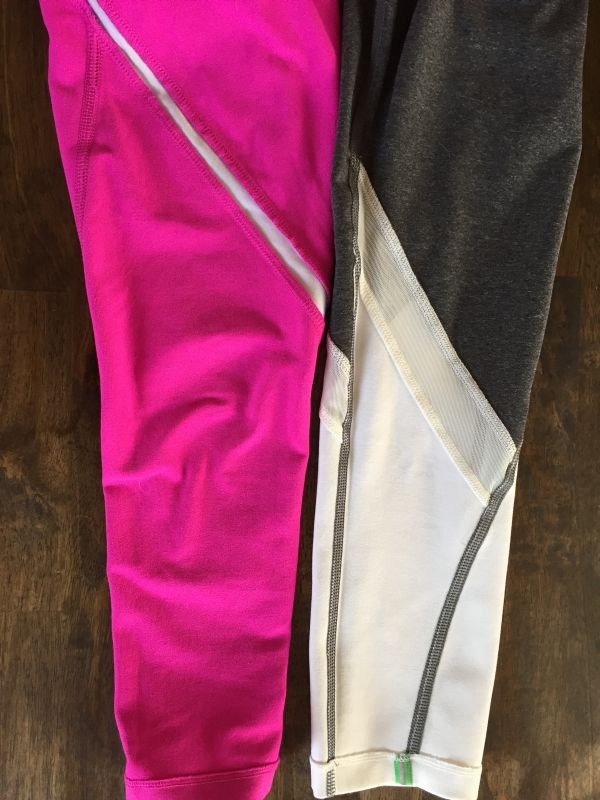 You know how I said above that the mesh was a little more scratchy on the new ones?  I turned one leg inside out to investigate, and the top seam of the mesh sticks out a little bit at the top edge (the bottom seam is flat), so this may be why it felt different.  I also noticed that the reflective strip is now sewn on. 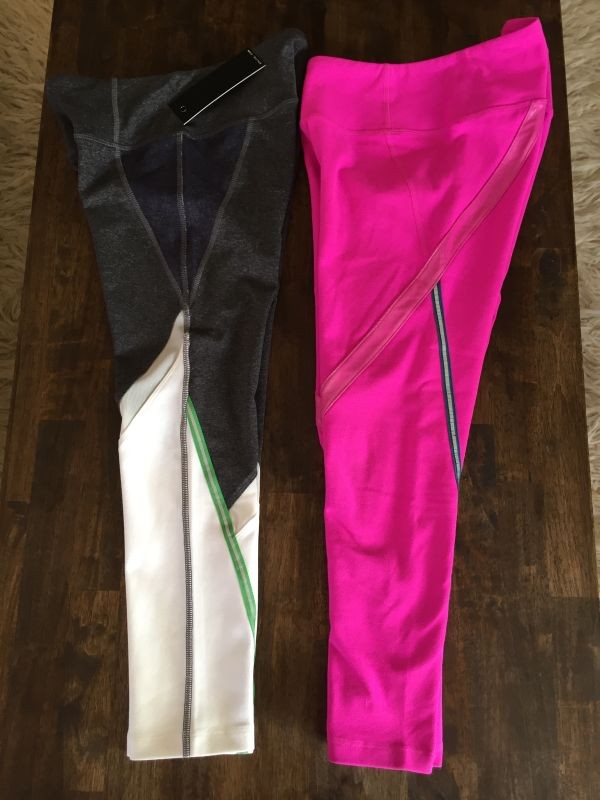 This outside leg seam is totally new.  It’s not visible in the stock pics online, so this was a surprise when I pulled them out of the package.  I prefer the cleaner silhouette of crops without this outside seam, although I would assume this seam had to be added to “anchor” the new mesh and reflectivity positioning.  Also, I think everything lines up so beautifully in the older novas (the front diagonal seam follows the line of the reflective detail perfectly, for example), but that aspect was lost when the mesh and the reflective detail both changed positions. 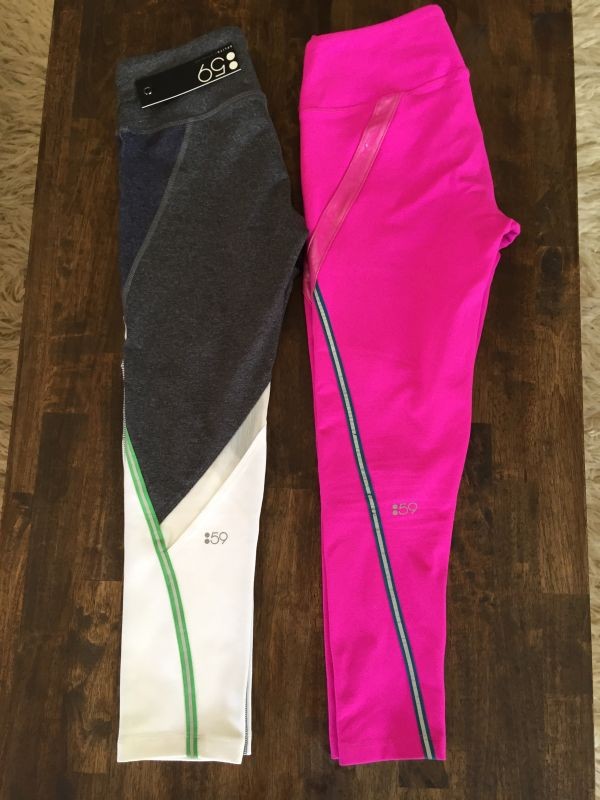 You can see in these pictures how the length, position, and angle of the rear reflective detail has been changed.  It’s much shorter now.  You can also see here that where the lamé used to wrap is now replaced by a simple seam. 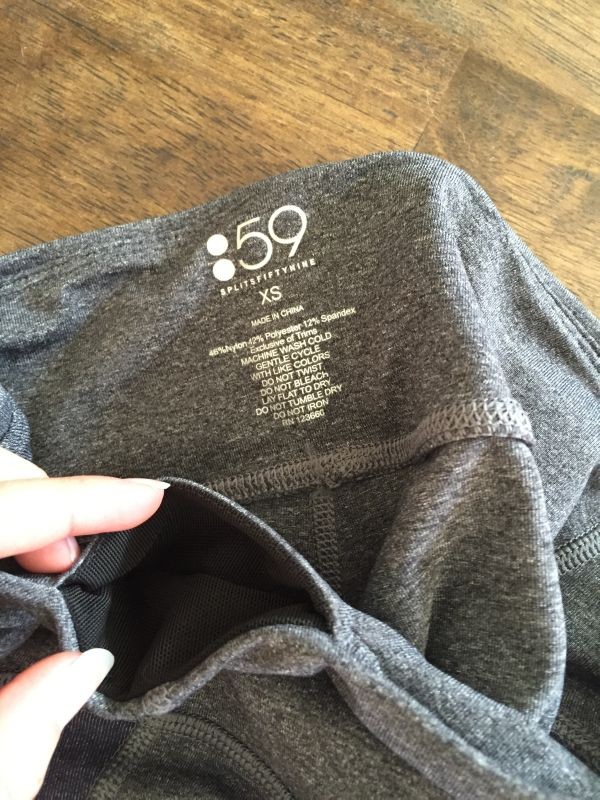 The new waistband pocket is lined with mesh.  The pockets on my other pairs are lined with the same fabric (2013) or with lamé (2014). 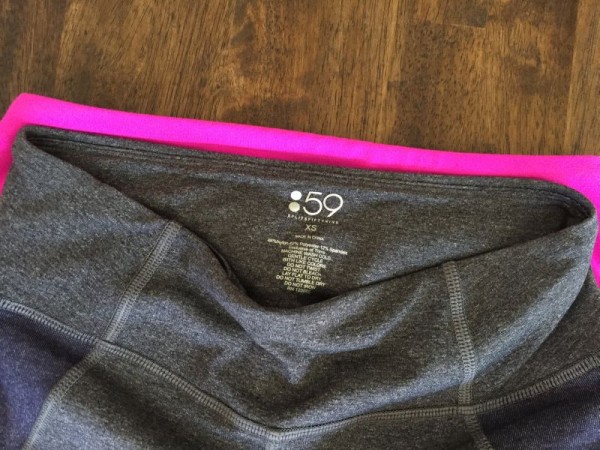 The new version has a significantly lower rise in the back than the new pair.  I noticed this immediately when I put them on.  When I took them off, I meticulously lined up the gusset, and found the new pair to be about a half an inch lower.  The front rise was not changed.  Functionally, I don’t like the lower back rise as much because I would worry about it sliding down.  The slightly higher rise also sit at a more comfortable spot across the back of my hips and low back. 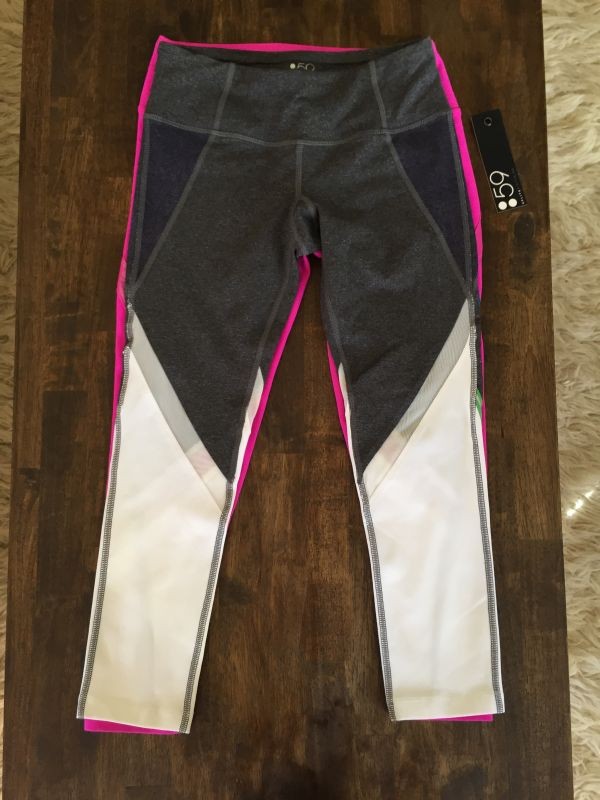 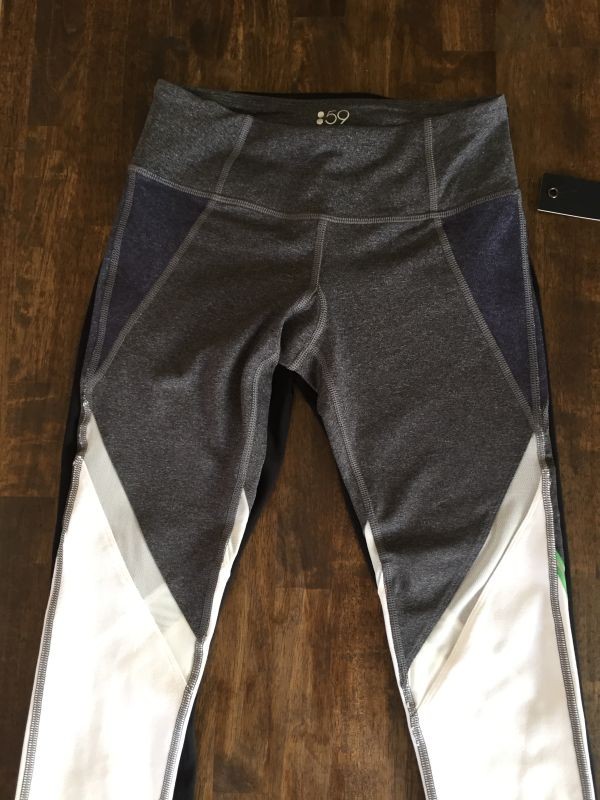 Be advised: the new cut is tiny!  The fit through the hips and thighs is smaller, but then is actually slightly looser at the leg opening.   They line up almost perfectly with my lulu size 2 WUs through the hips but are actually slightly smaller through the thighs (bottom pic).  Personally, I’m not mad about the smaller cut because now they are closer to my true size, but I imagine this could be an issue for others.  Unless my pair just happens to be cut abnormally small, you may want to consider a size up, especially if you need extra room in the thighs.

Overall, I have to say I prefer the previous design, hands down.  I do acknowledge that the new pair looks good, but I don’t think it looks as good as the original.  And, crucially, the new pair just doesn’t feel as good to wear, which became especially clear as I was changing back and forth between the new and old pair for this review.

In sum, I prefer the previous design mainly because: 1. the lamé detail was unique and fun while mesh is pretty ubiquitous right now; 2. the higher back rise is a more comfortable fit; 3. the lines and the overall design looks much cleaner to me; 4. the lamé and reflective piping seem to do a better job of shaping and elongating the leg than the newer, shortened versions.

Although I’ve been a fan of Splits59 for ages, this style is sadly a miss for me.  I’m left hoping that Splits either goes back to the old version or updates the novas again to take care of some of the issues I described here.

Stay tuned for an upcoming post about the updated devon ii.  I’m loving that redesign!