I’ve got one last recap of some try-ons for you all.  A lot of these have been out for a little while, but I was curious about some of these styles so I’m sure I’m not the only one. 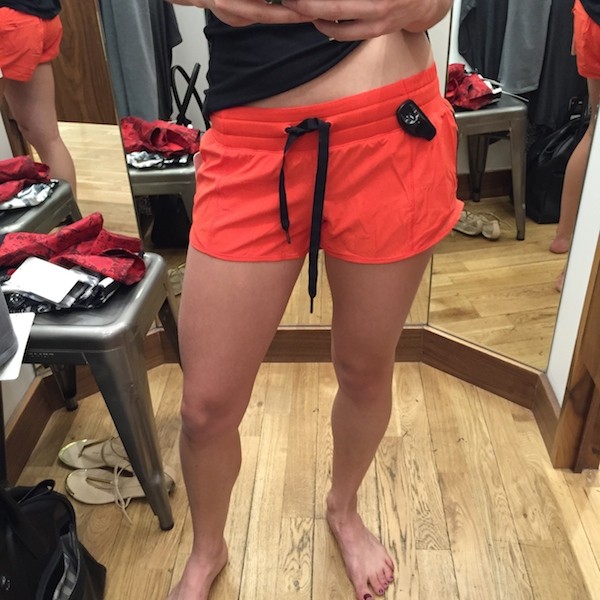 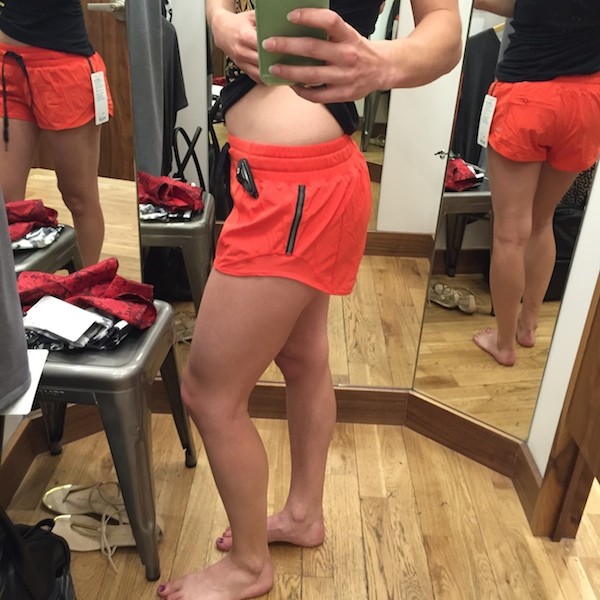 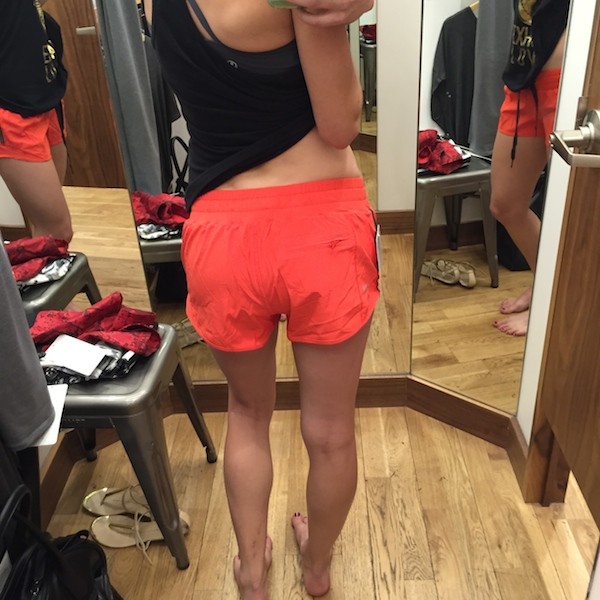 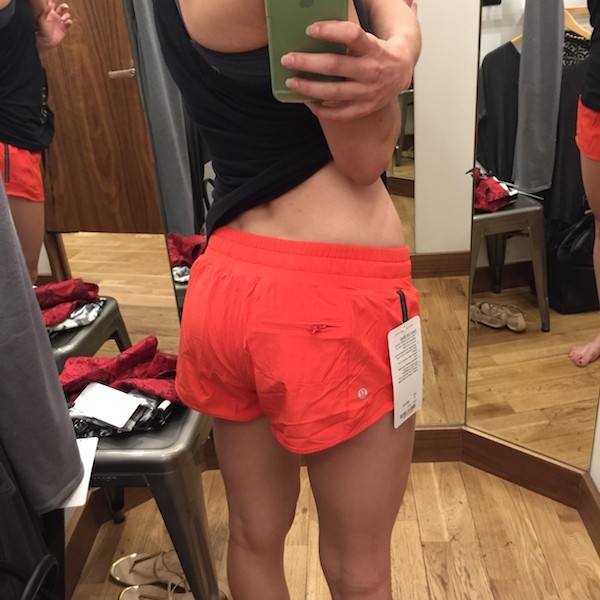 I tried the hotty hots last summer when they first came out and didn’t like them at the time.  They were pretty diaper butt-y for me.  I wanted to give them another shot, though, and I finally found a pair in store in my size.  Although they’re still pretty generous on me, I thought they fit better than last year’s, though I’m not sure if anything actually changed with the style–could’ve been my shape changing, difference in colors, or just inaccurate memory. :) The fit on these is really light and airy, even moreso than speeds.  The fabric felt a little less buttery on these than (4-way) speeds.  It held it’s shape a bit more, unlike 4-way speed shorts, though these weren’t as structured as 2-way speed shorts.  Not sure how much that varies with different colors of the hotty hots.  At any rate, I’m sure I would love these shorts if there was no such thing as speeds, but I do have a slight preference for speeds.  That said, since speeds fit is so wonky these days, hotty hots are a great alternative.  These particular alarming hotty hots look a ton like my love red speed shorts, so I definitely didn’t have any need for these right now. 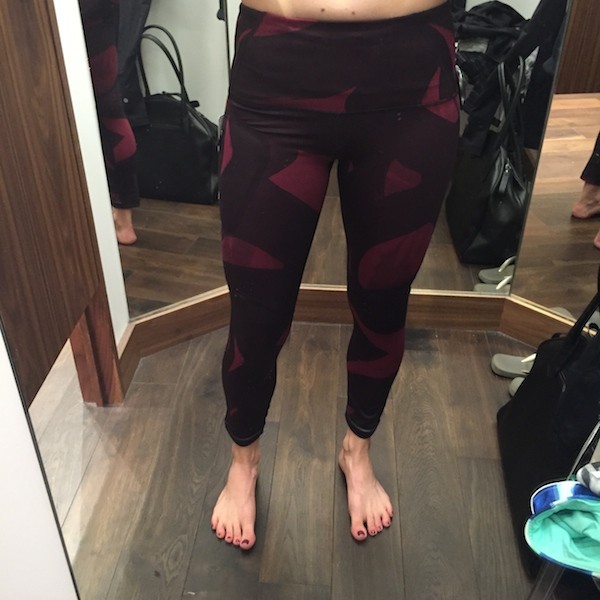 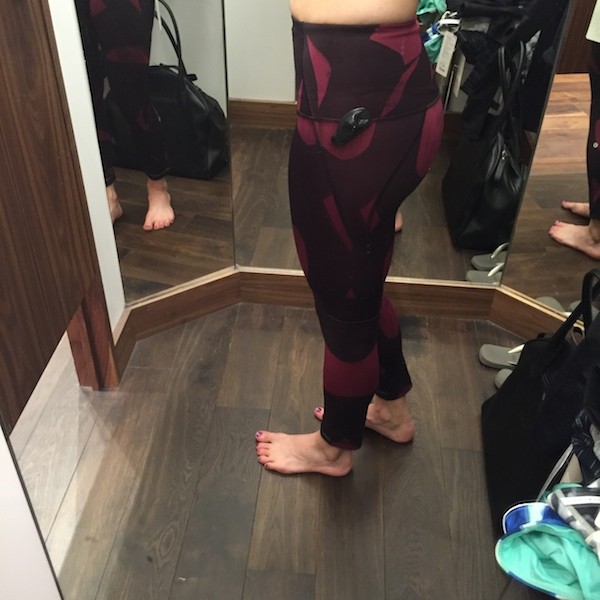 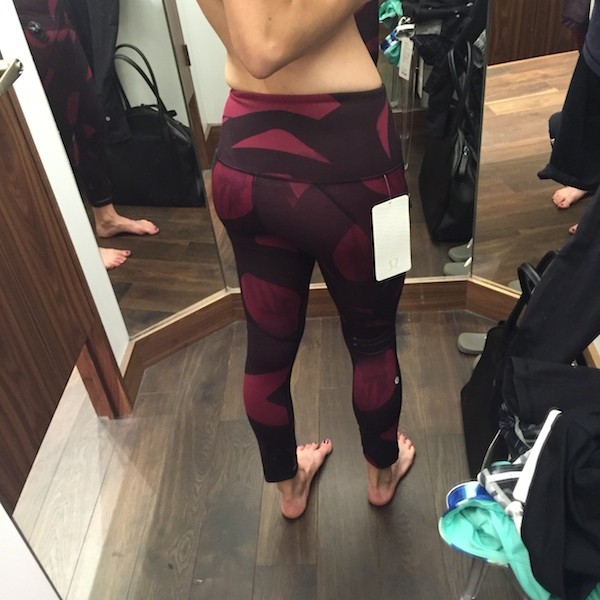 I’ve been liking this length of luxtreme crops lately, so I was curious about the all sport crops.  I tried on back spin stroke dashing purple, which is a pretty but subtle print.  They were not sheer on me–I rarely have issues with sheerness on luxtreme for some reason, even though I very often have issues with luon. 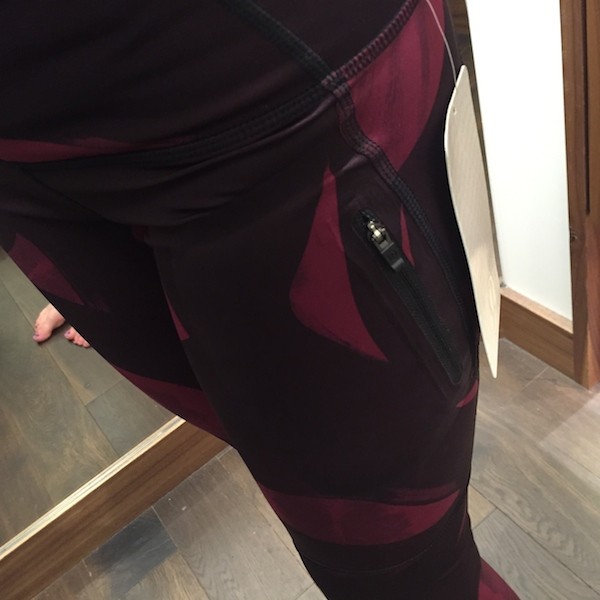 The top of the side zip pocket created a weird crease/seam at the hip.  You can see in this photo and in the one above from the front that there is some creasing on one side that isn’t on the other.  That isn’t just because of how I’m standing, the pocket pulls on the fabric oddly and doesn’t sit very flush. 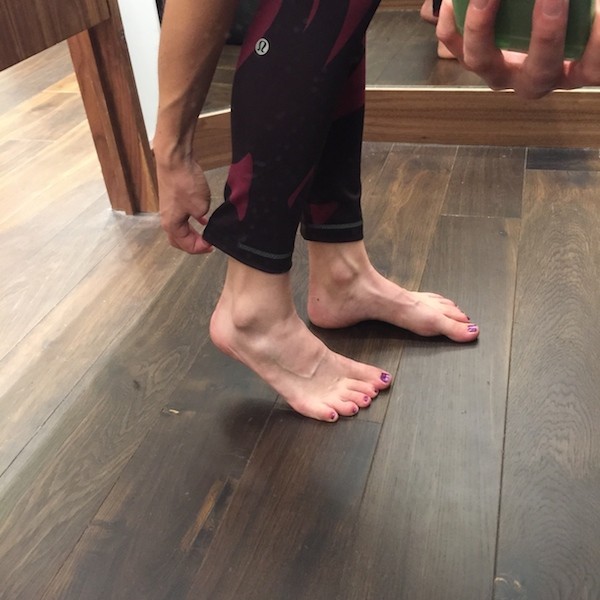 Also, I have gaping issues fairly frequently at the ankle (combo of being short + having small calves/lower legs), but these were really bad.  In this photo, I’m not actually stretching the fabric, I’m just holding it out so you can see how much extra fabric there is.  I didn’t like that at all, plus the pocket issue, so I’ll be skipping out on these. 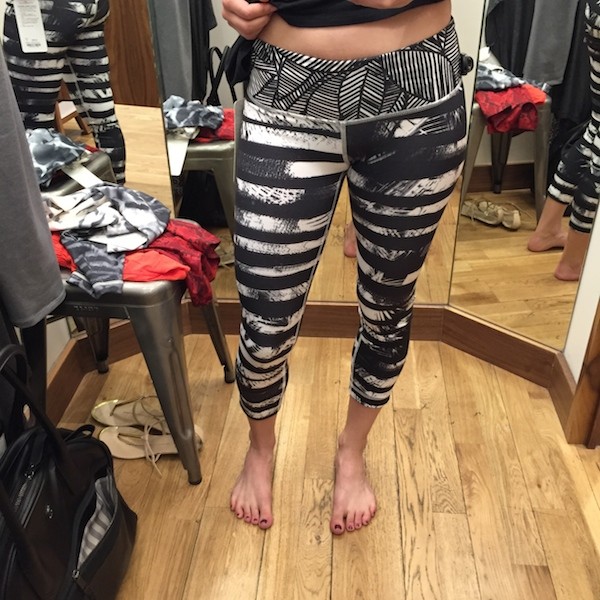 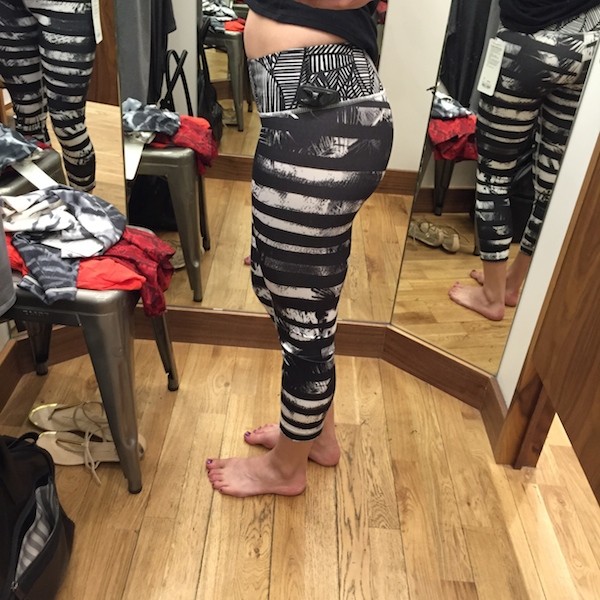 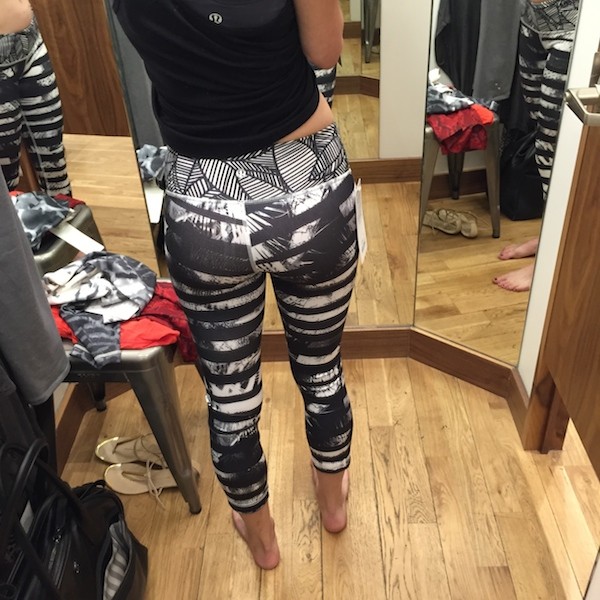 The shady palms print is pretty fun, and I’ve been wearing more printed bottoms lately, so I gave these a shot.  I don’t really love the banana leaf contrast waistband, but it’s not too bad.  Like most luon poly blends, these were definitely sheer on me in a squat.  I noticed these were made in Canada, like the pretty plume WUC I had also tried on.  These felt true to size on me.  Kinda cute, but an easy pass overall.

Btw, Athleta still has full-length chaturanga tights in black/white floral flow on sale, which is a very similar print.  If you check the petite and tall tabs, there are still quite a few sizes available for a mere $34.  I haven’t tried these, but they’re worth a shot if you want a similar look while savings some $$. 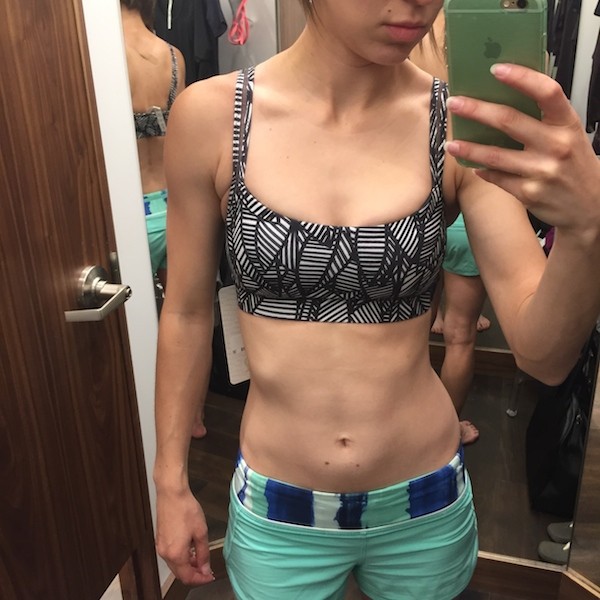 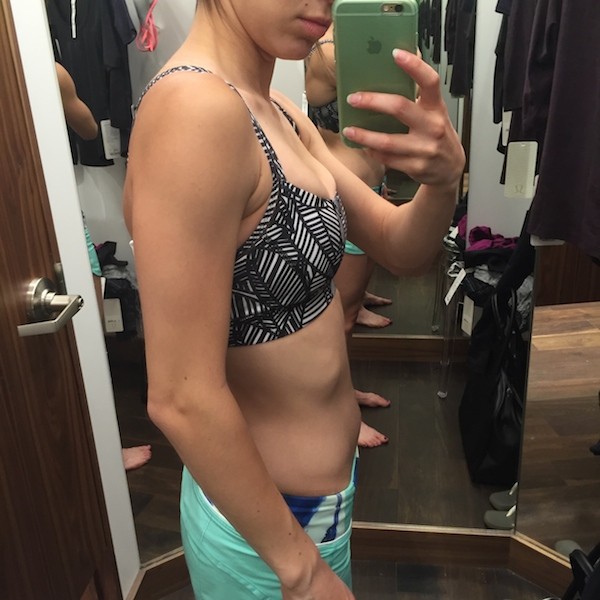 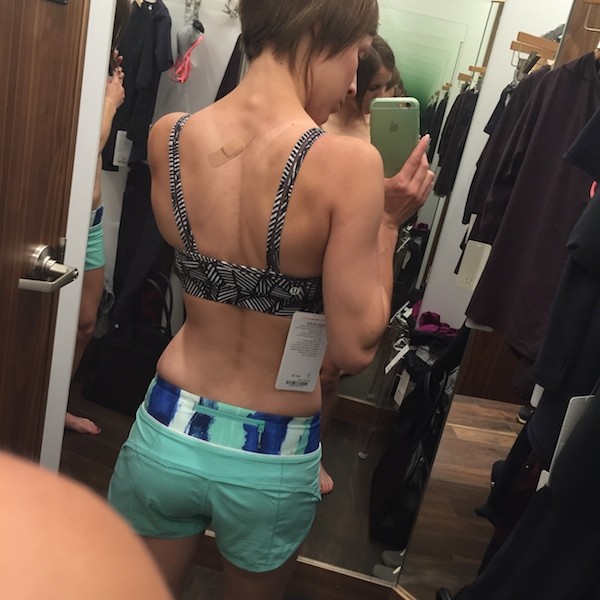 This bra was a hot mess.  I had tried the straight up bra in a 4 (size up for me) a few weeks ago but finally found my usual size to try on.  I could’ve sworn the straight up bra was originally billed as an option for C/D-cup ladies, but now it’s labeled for B/C cups.  It was pretty unflattering in the boob area, just a total bread loaf situation.  On top of that, it cut in a ton.  The coverage was less than an energy bra, probably somewhere close to the flow y bra coverage.  Also, the straps were quite uncomfortable.  They didn’t cut in, but the detailing on the straps made them very scratchy.

I tried the size up again, just for comparison, but it didn’t help any of the issues I had.  I thought I remembered the one I tried on a couple months ago being less awful (just too big in the band because of the size up), so I’m not sure if the straight up bra has changed or what.  Either way, this is another style I’ll be steering clear of. 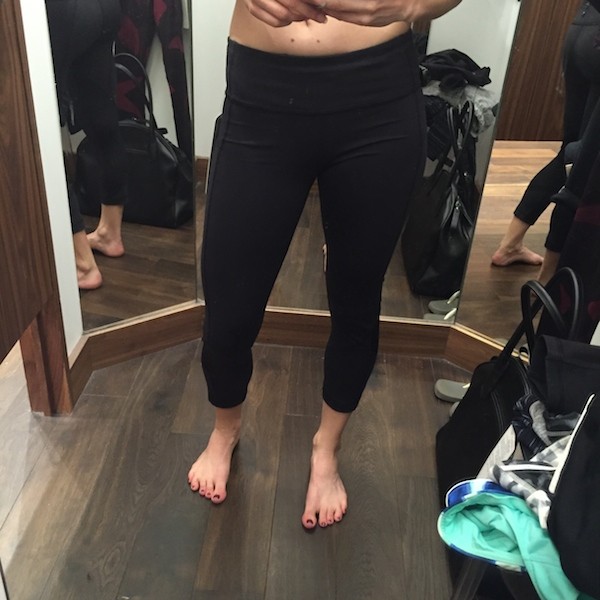 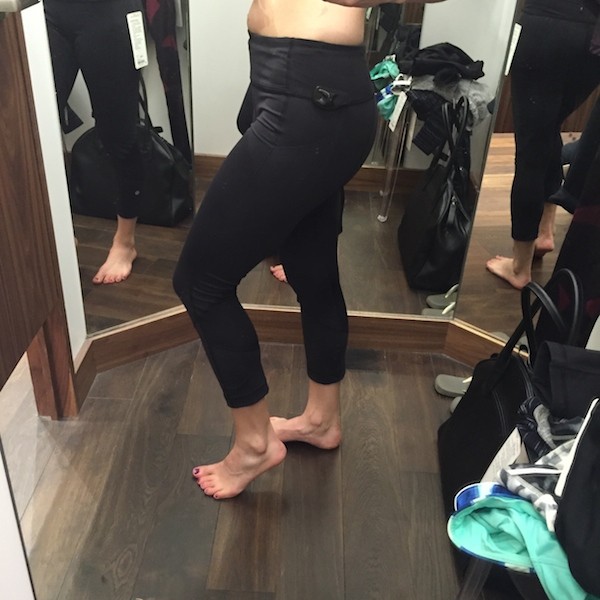 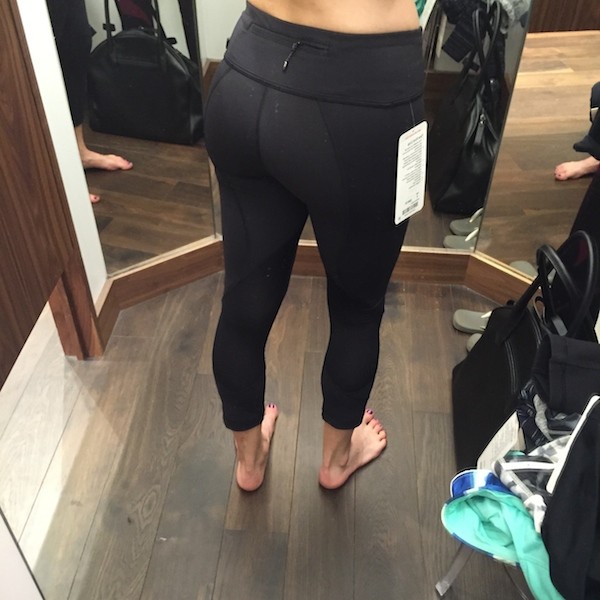 The pace rival crops are theoretically replacing the inspire crops, and I have some issues with inspires, so I thought I’d try pace rivals.  Alas that all they had was boring black.  Anyway, the fit on these felt pretty similar to inspires overall.  On the pace rivals, you have the addition of the side pockets, which means extra seaming, but I didn’t find that to be uncomfortable at all.  I had the same slight ankle gaping that I usually get on inspires.  I would’ve liked to have tried on some other more interesting color, but the black at least was not sheer.