Here’s my last batch of try-ons for now!  A couple of these are styles that have been around a little while that I just got a chance to try out.  For reviews of other newer releases, see part 1 and part 2 of this batch of try-ons. 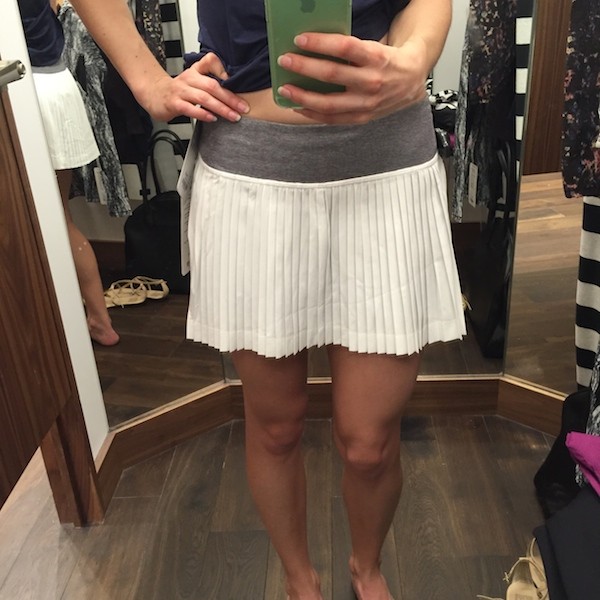 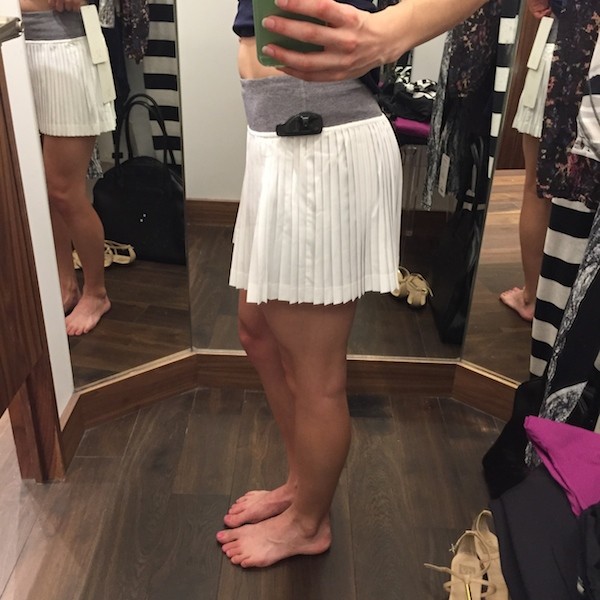 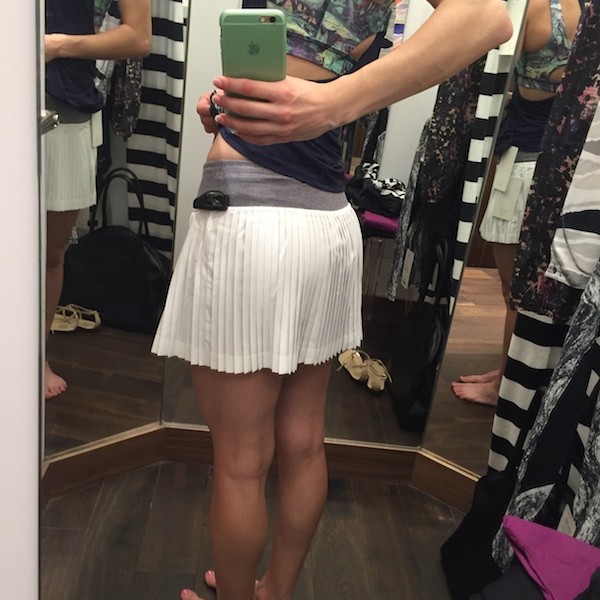 I tried on the pleat to street last year, but for some reason, this year’s seems to fit a little better.  I’m not sure what changed between the pleat to street and pleat to street ii and if that has anything to do with it.  The pleats stayed relatively flush.  The one downside to this is that if you bend even a little bit, it shows the shorts underneath.  It’s pretty short, even on someone petite like me. 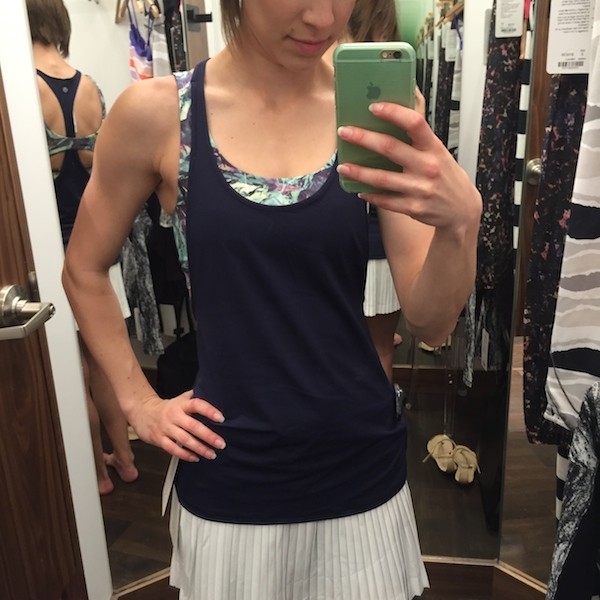 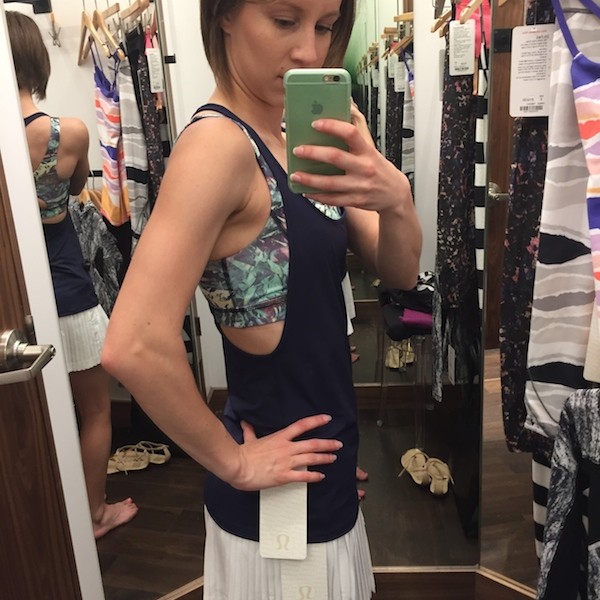 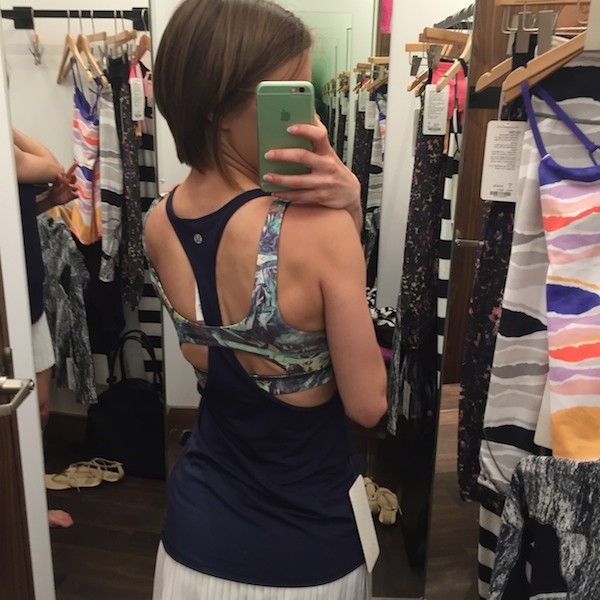 I liked the look of this tank when it first came out, and the fit seems to deliver, too.  The slightly loose body is forgiving while still being flattering.  The attached bra offered plenty of support and coverage.  I know this design doesn’t appeal to everyone, but if you do like it, it’s a great tank.  Personally, I’ve been shying away from built-in bra tanks in favor of separates, but if I found one of these for a steal in a color I liked, I might pick one up. 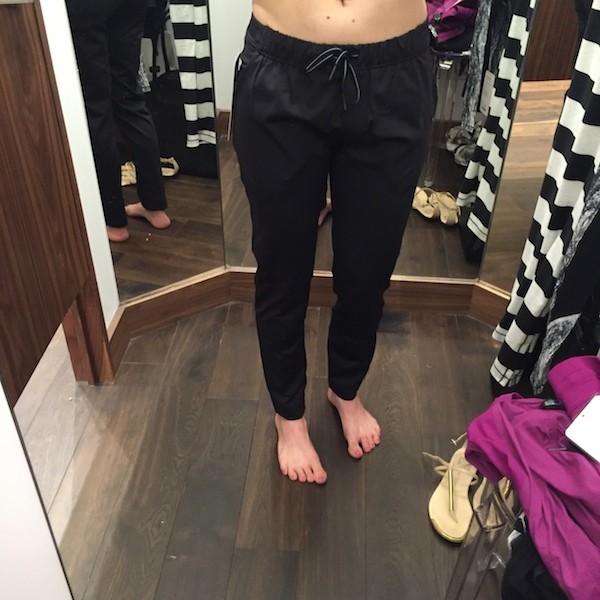 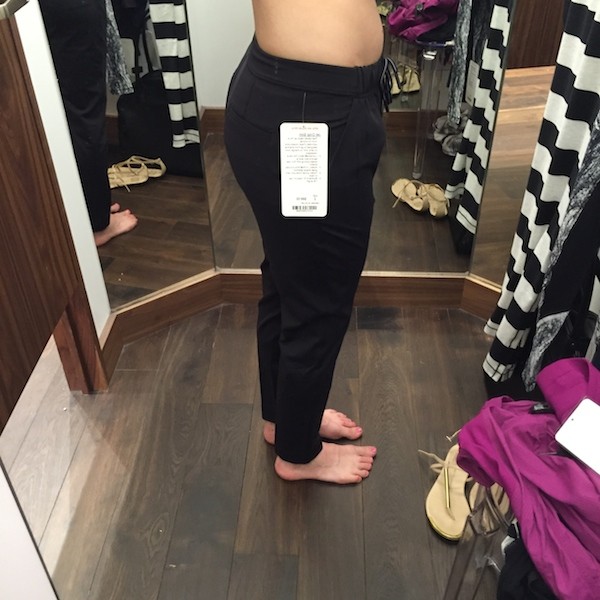 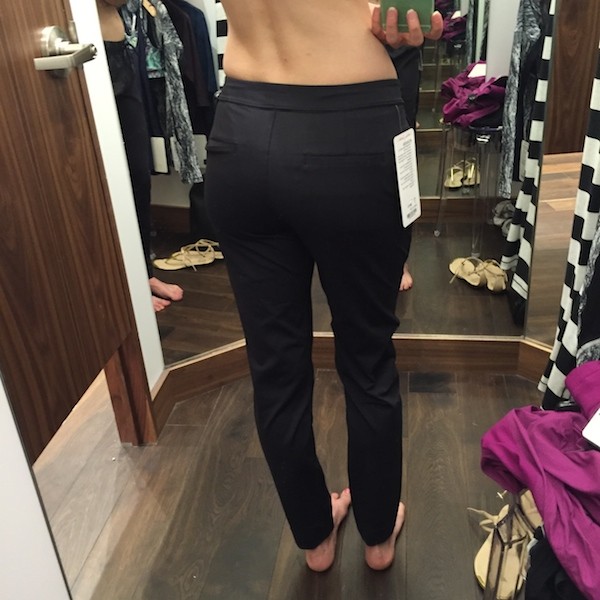 I’m a bit late to the party with the jet crops, but so many people had said they were very flattering in the slim version.  The back was nice and the cut strikes a nice balance between relaxed and tailored. 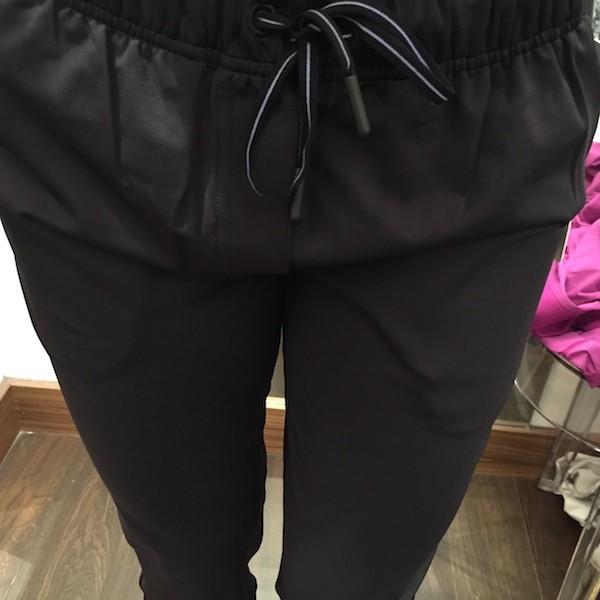 Unfortunately, they bunched at the crotch in a very awkward way.  I’d heard of some others having this issue, so I know it’s not just me.  That said, this apparently doesn’t happen with everyone, so I’m not sure what about the pants or about a person’s body type dictates whether these work out. 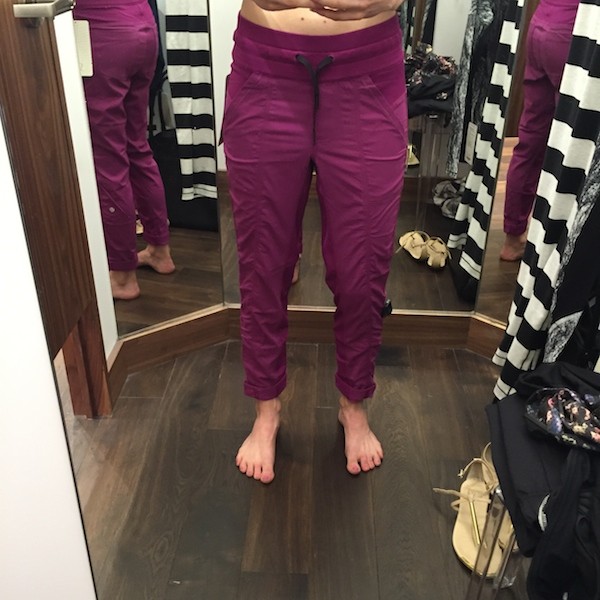 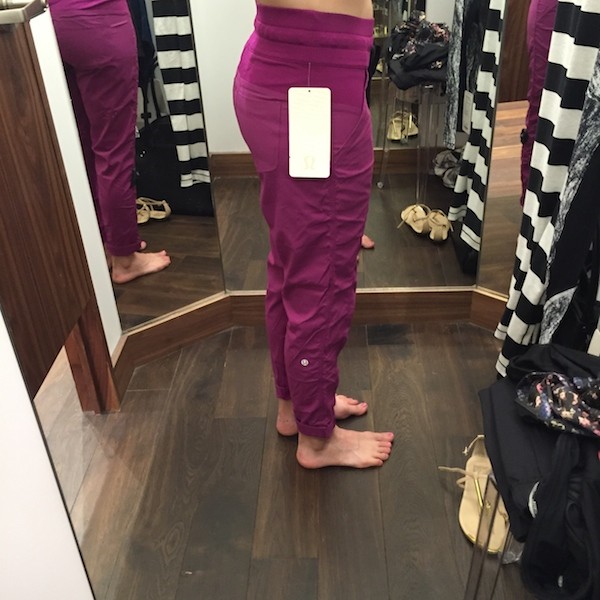 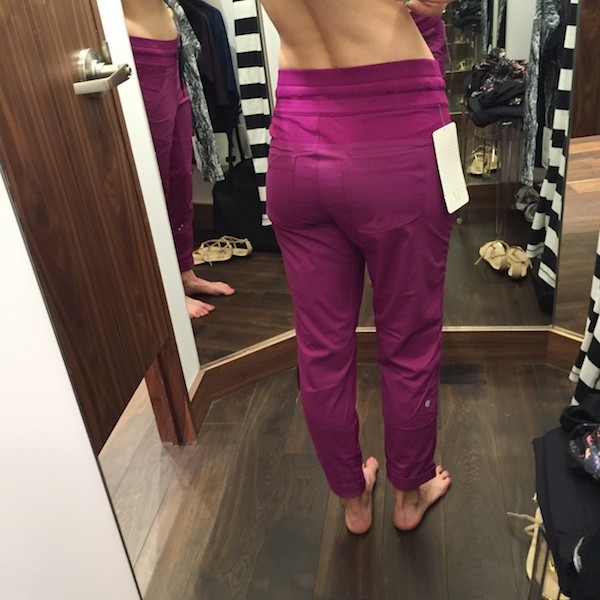 I’m definitely late to the party on street to studio pants.  This style has been out for a while, but it was my first time actually bothering to try it on.  I thought they might be a nice casual summer style and I’ve seen pics of others really rocking them.  Unfortunately, I thought they looked just awful on me.  The slight crotch drop looked pretty weird, and the thighs were too big even though the hips and waist were ok.  The proportions of the leg taper doesn’t quite work out either.  All in all, these did nothing for me. 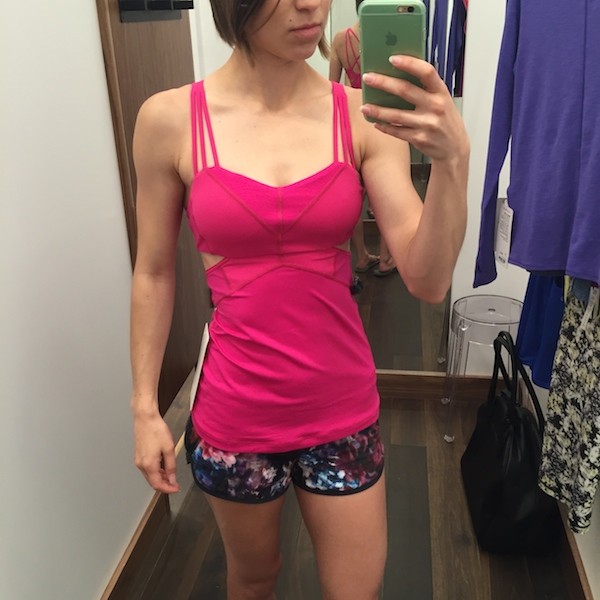 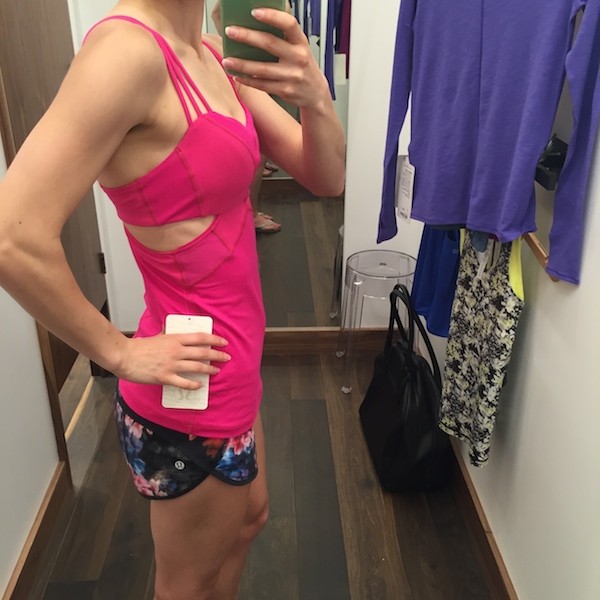 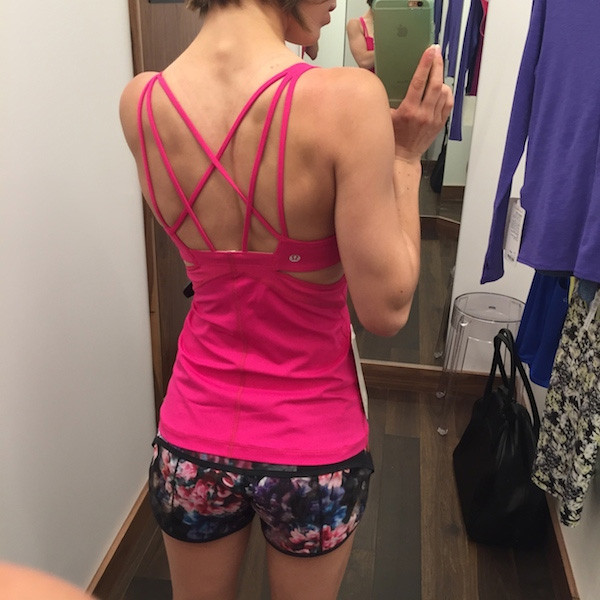 The support on this is really low, probably because the cutouts are where some of the band would be.  Coverage is on the lower side of medium for me.  The jeweled magenta is a beautiful color, and the neckline and straps are very feminine and pretty.  The body is fitted, but not skin-tight.  I didn’t find that the cut-outs were restricting or pinched at all, though I do have a small rib cage for my size.  I like luxtreme on tanks like this one, since I feel like it’s a bit cooler than luon.  This would be a nice hot yoga option. 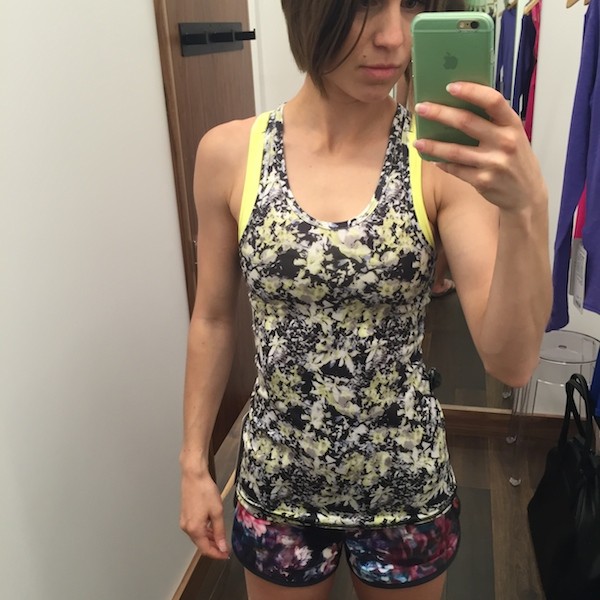 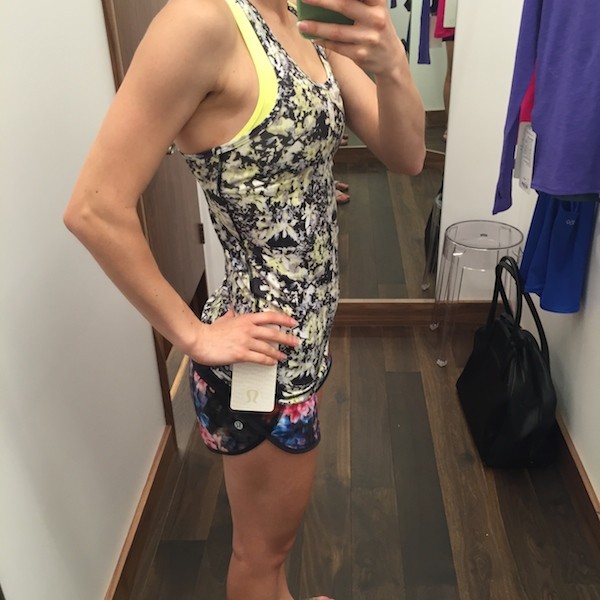 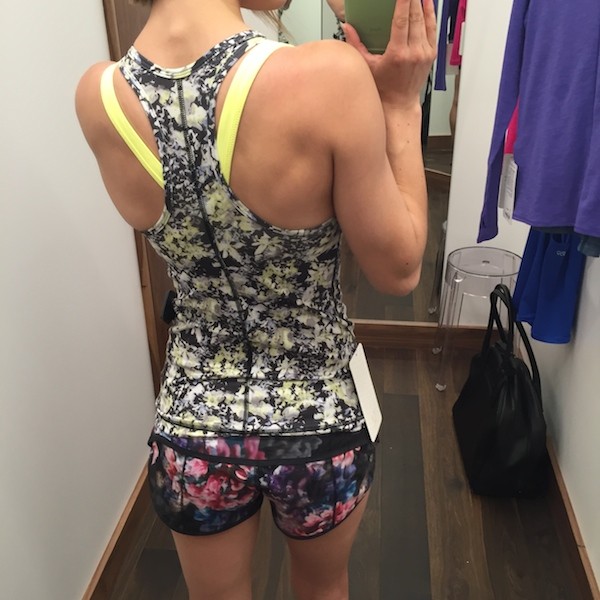 This tank fits great.  It seems to be a slightly slimmer fit on me than some of the stock photos online for some reason.  The length is a bit shorter than a CRB, so it’s just right for someone on the short side like me.  The support felt medium to me, and the coverage was high enough to keep everything covered, but not too high.  I do prefer a slightly wider-set scoop at the neckline than this one, but that’s just a matter of personal preference.  The main issue is that I felt like this was a bit of a boob-smasher.  There seems to be more uni-boob than usual going on, and overall it just didn’t seem all that feminine or flattering in the bust area.  I think the neckline might be contributing to this look, but I’m not sure.  Other than that, it’s a pretty solid tank.