Here is the third and final installment of my recent try-on spree.  Most of the items in this post are sold out or a couple months old, but I wanted to post this for reference anyway.  For more try-ons, see part 1 and part 2.

For reference, I am 5’3″, and I typically wear a size 2 in lululemon tops and bottoms.  Unless otherwise noted, that’s the size I’m wearing in these pics. 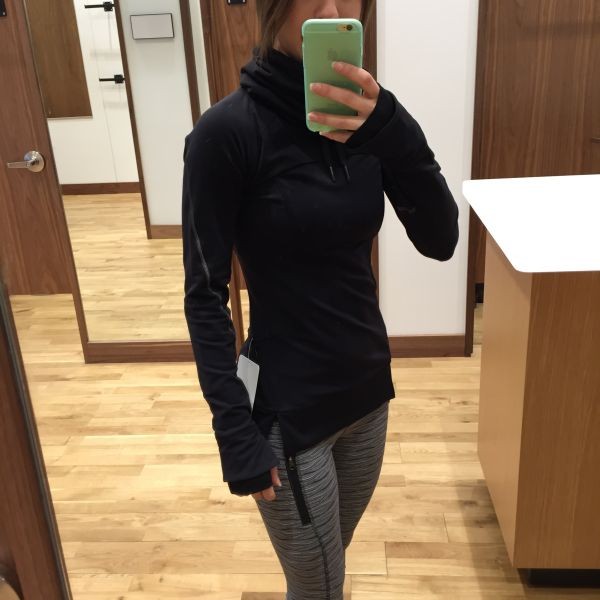 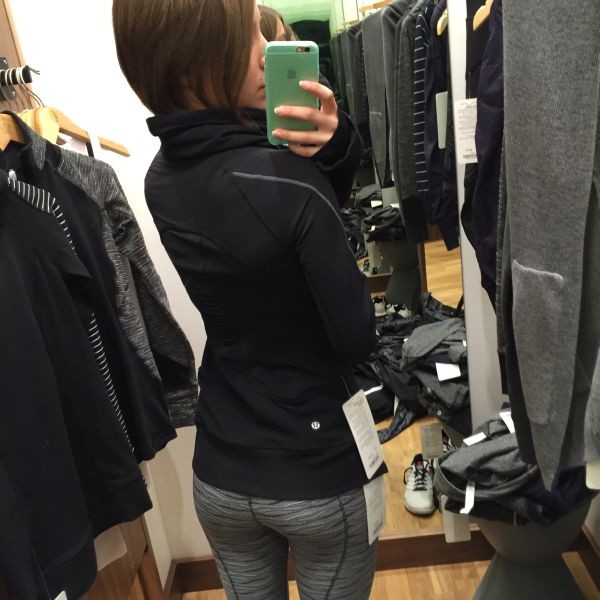 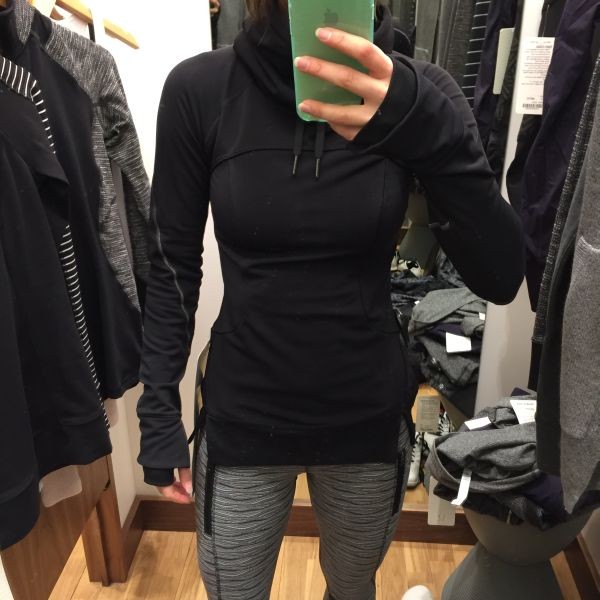 I had really, really high expectations for the flurry fighter PO after everyone raved about it.  On the positive side, the tech fleece fabric on this was amazing–so nice and warm. The fit in my regular size was overall good, fitted but not too tight.  The top seam was kind of a weird look to me, almost like a blocky-boob kind of look.  Not a dealbreaker, just something that seemed a little odd to me.  I’ve never loved the slits at the hem, either, and wish it just had a regular hem. 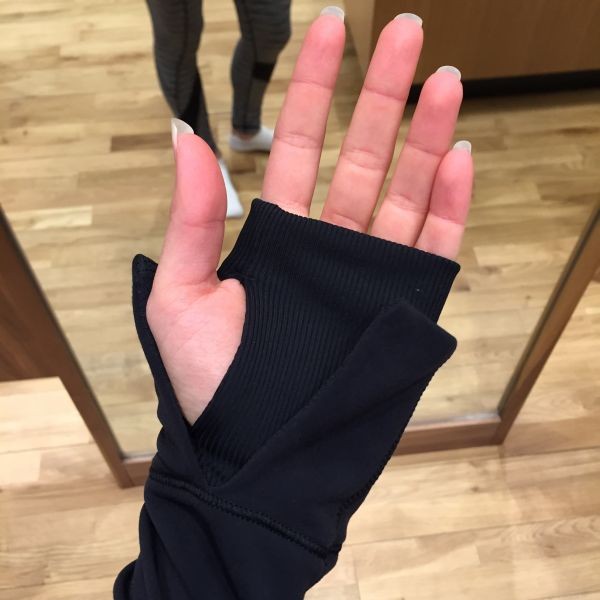 Prior to trying it on, I didn’t realize it had the extra cuff layer with the slit on the bottom.  This actually irritated me a lot–I didn’t like it flopping around.

Overall, this one had some great plus sides, but also its fair share of some mildly vexing downsides.  Close, but not quite perfect. 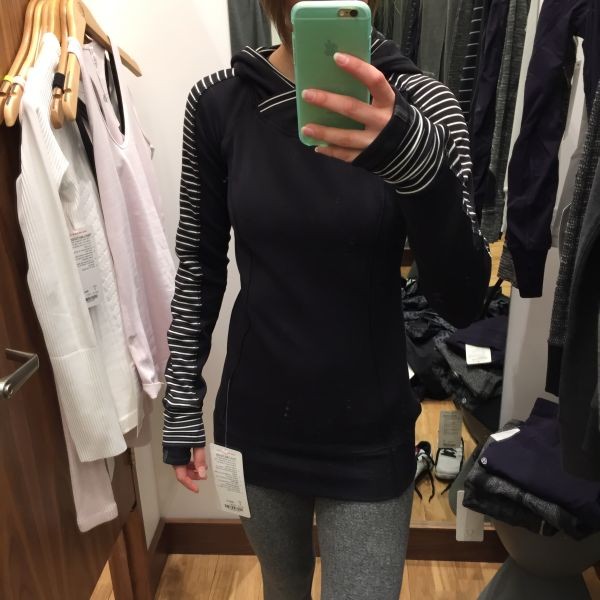 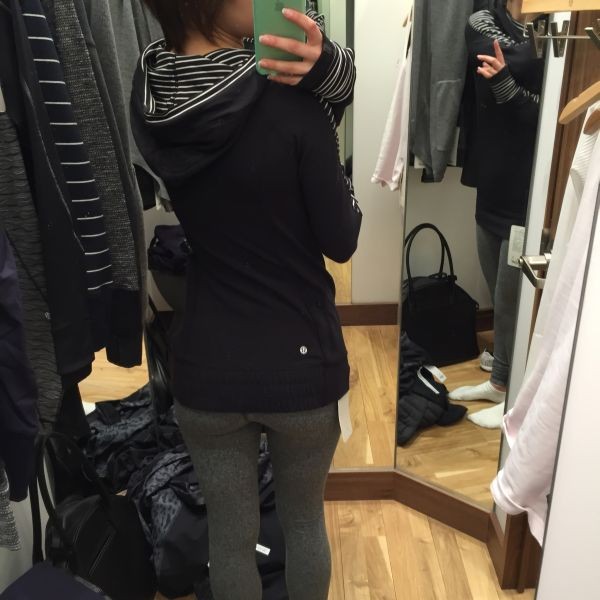 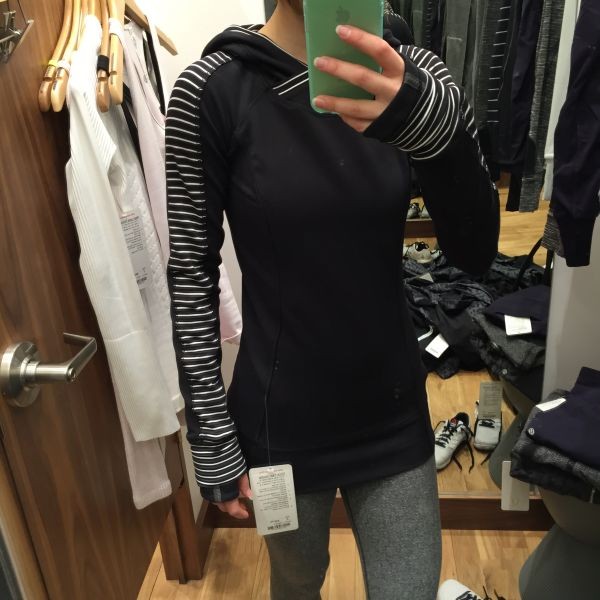 The cut of this was very generous through the waist, though the black makes it harder to tell.  In my true size, I had more than enough room for layers, and I probably could’ve gone down a size had that been available.  The seams also emphasize a straight-waisted silhouette, since they are sewn pretty much vertically instead of tapering in at the waist to create an hourglass shape.  Granted, this is a hoodie, which probably means they intentionally cut to be baggier rather than the more sleek style of other pullovers (like the flurry fighter above, which is much more fitted).  But, as a small person, this didn’t do much for me.  I wouldn’t have minded the loose fit through the body if the sleeves had been a bit more fitted, which I feel goes a long way to balancing out a look instead of just making it look like your clothes are simply too big. 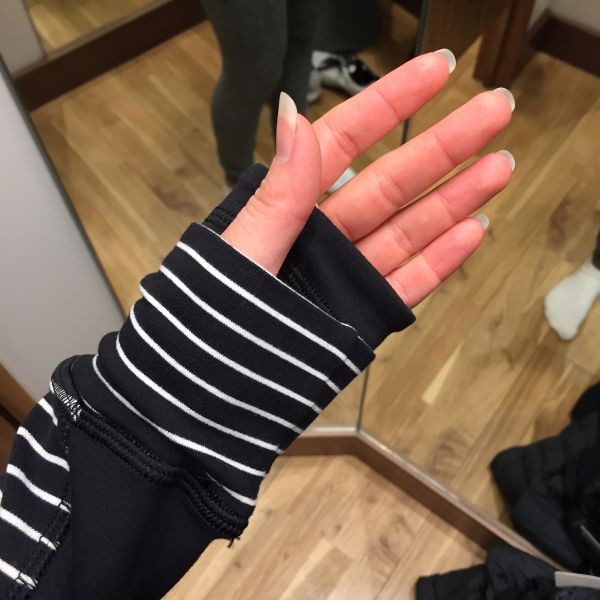 The thumbholes have an additional layer for warmth.  I found the whole thumbhole area too tight and a bit uncomfortable, especially with this top layer.

Overall, another hyped-up pullover I had high hopes for that, while nice, fell a bit short of my expecations. 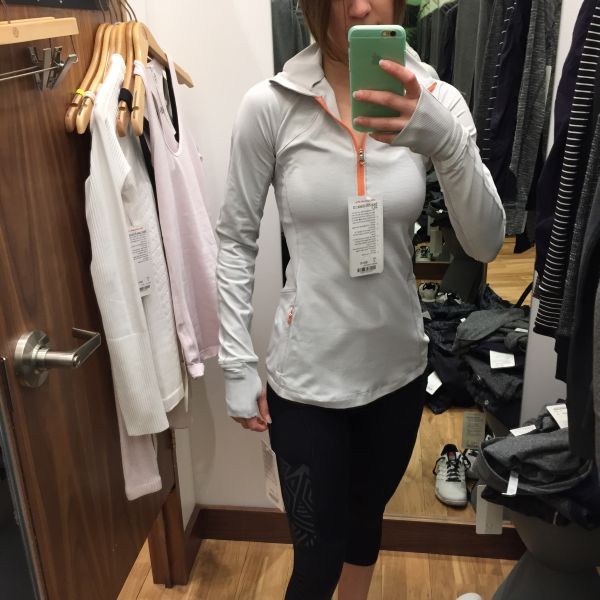 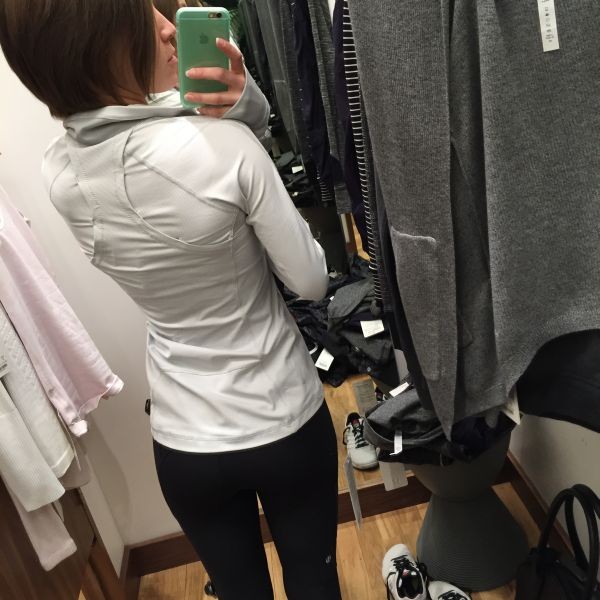 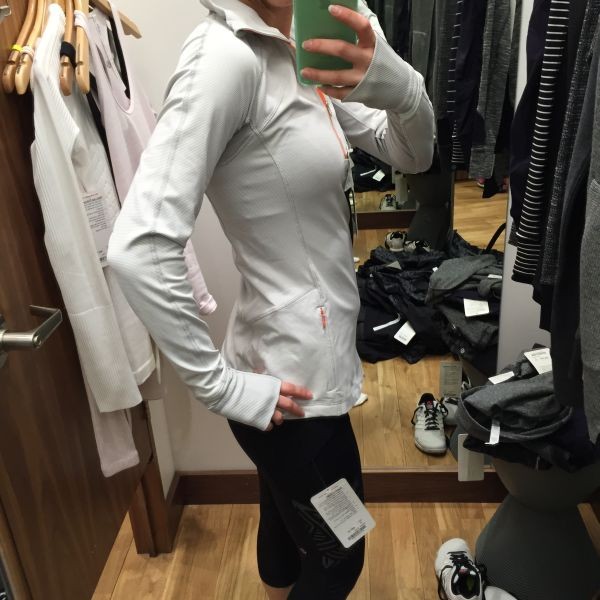 I don’t know what it was about the way this was cut, but it did not work for me at all.  The whole thing was a bit loose and sloppy compared with the race your pace (see below) and the think fast 1/2 zip.  The arms were especially loose, and as I said above, I just can’t get behind loose arms.  A lot of people have voiced their dislike for the brushed luxtreme, but I actually liked the fabric, so it’s too bad the cut was so unflattering on me. 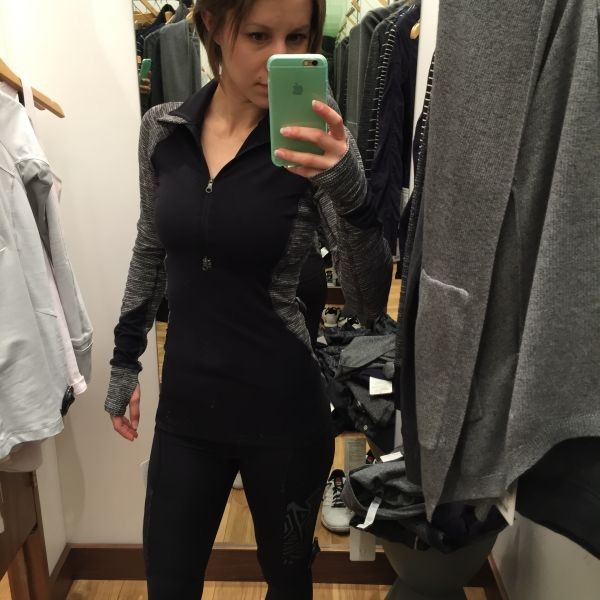 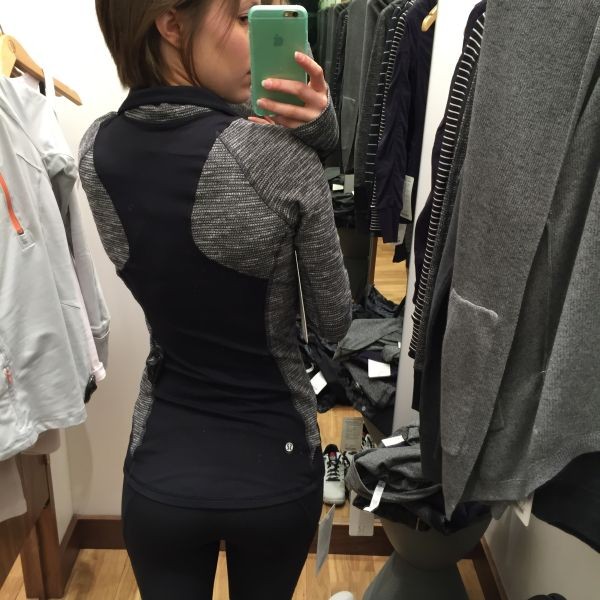 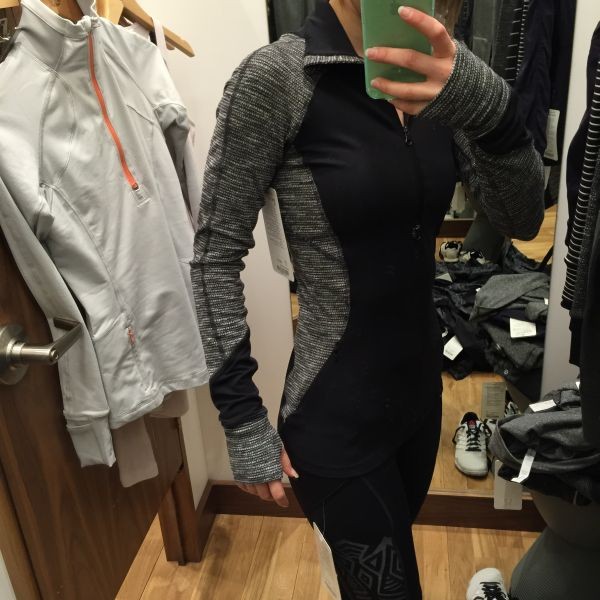 I had skipped trying these on a couple months ago during another store visit, and I only tried on the think fast instead.  Well, that was dumb, because I ended up loving this.  I tried this on after the other POs, which made the superior fit that much more obvious and refreshing.  I actually thought the black/coco pique was a little weird-looking in the pics online, but when I put it on I actually thought it was kind of bad-ass.

I managed to pick this one up on markdown, which made it totally worth it since I recently sold one of my 2 rulu long sleeves and wanted a replacement.  I will get a lot of use out of this for the rest of winter at CrossFit as well as hikes through early spring. 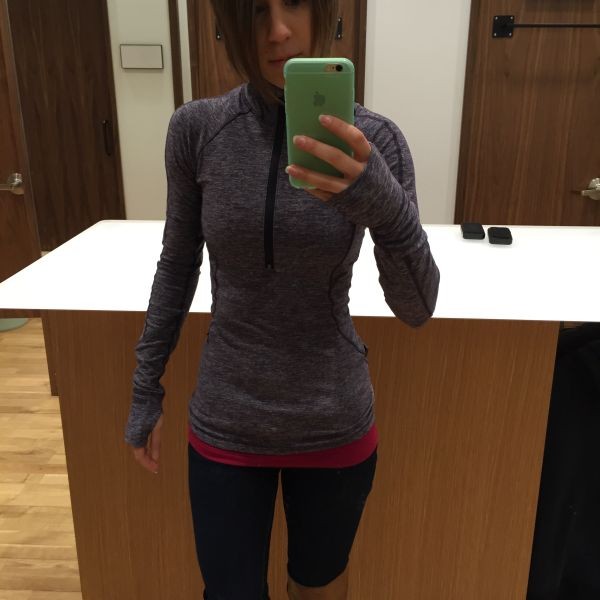 I really liked the heathered black grape, too, but I could only go for one, and I decided I liked the coco pique better.  I also really like the black wee stripe, but it has long been sold out online, and wasn’t in the store either.  Maybe someday I’ll be able to hunt one or both of them down. 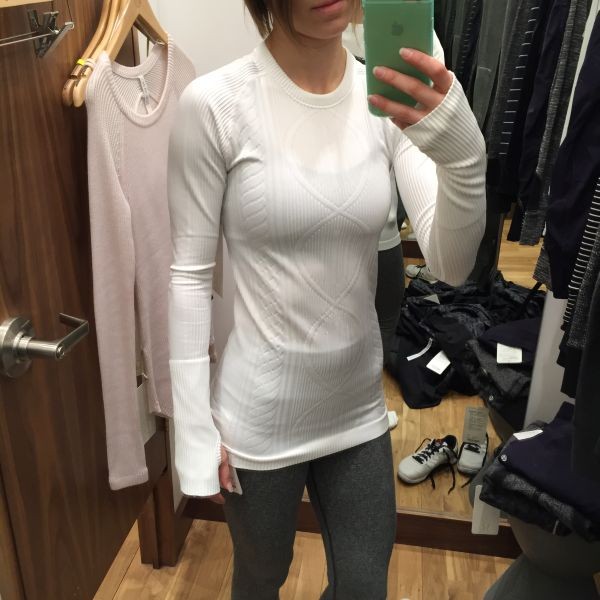 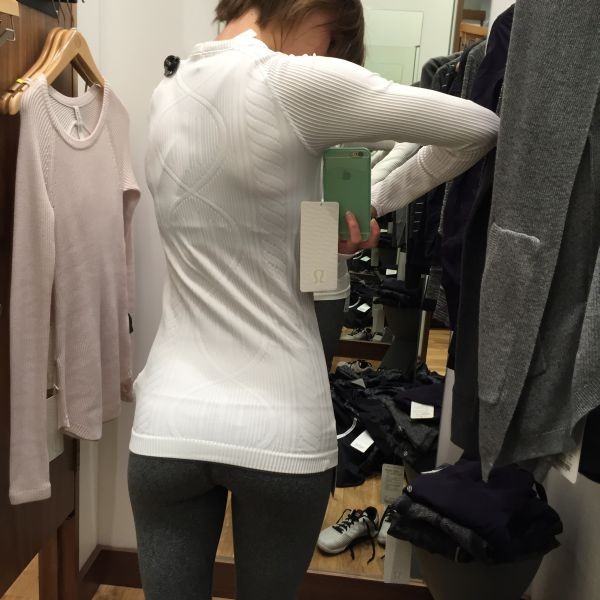 As others had told me, the fabric on this is significantly thicker than swiftly material.  Because it’s thicker, it doesn’t seem as delicate.  I found it fit a little bigger than a swiftly also, since this is made to be a mid-layer rather than a base.  I could’ve easily fit a tank underneath (although frankly, I can also wear a tank under a swiftly without a problem).

The length is a little bit longer than a swiftly, but I didn’t feel it was too long for me, even as a relatively short person.  I would’ve preferred to try on a darker color as I think I would’ve been happier with the look, but white was all they had in my size.  Overall, I thought it was alright, but I definitely didn’t love.  Personally, I prefer rulu long sleeves for the feel and the warmth. 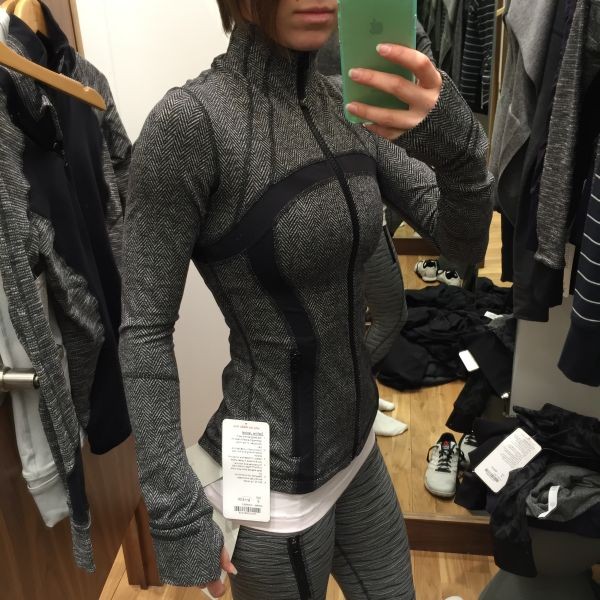 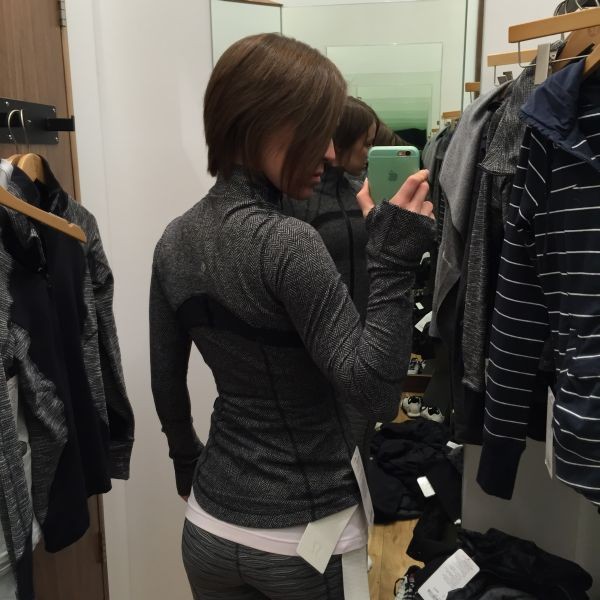 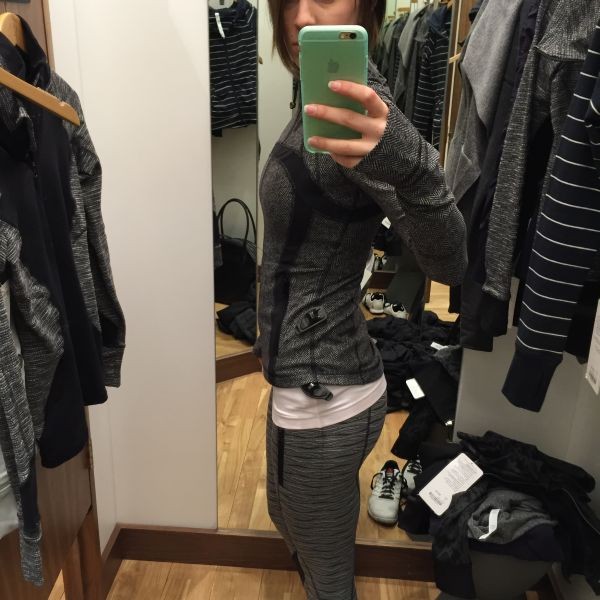 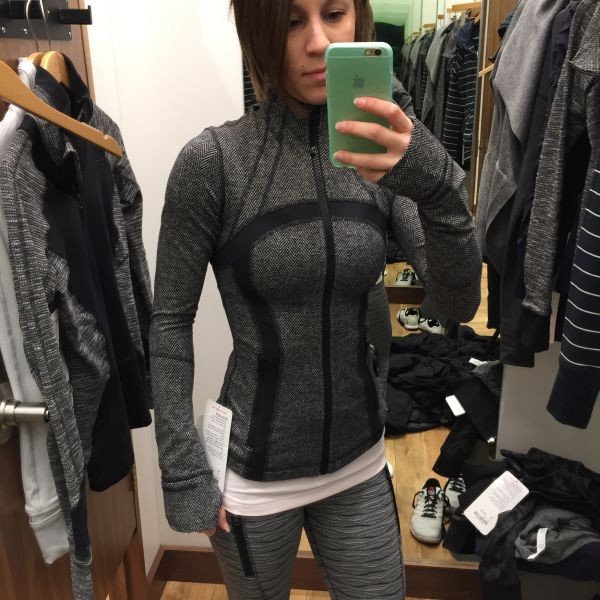 Somehow, I’ve managed to never try on a define jacket before this day.  I know, I know, go ahead and chastise me.  I grabbed this herringbone bad boy off the shelf and was really impressed.  It felt a little bit more fitted, but maybe it just seemed more fitted because it simply fits me better.  It’s really a dead-on fit.  Sometimes, the zipper on my formes tends to pucker a bit just below my bust, but that didn’t seem to happen with the define.

The one thing I don’t like about the define is the giant lulu logo plastered in black across the front.  Convenient how the omega shape just happens to accentuate a womanly figure, ya know?  Also, I almost want to say that the styling looks dated (lulu blasphemy!), but that may just be because I know it’s a design from many years ago.  The defines that are all one color and just have the seams are a little bit more palatable to me, and of course the forme doesn’t really have this motif at all, which I like.

If I could have the fit of the define with the more subtle styling of the forme, I’d be in fitted-jacket heaven. 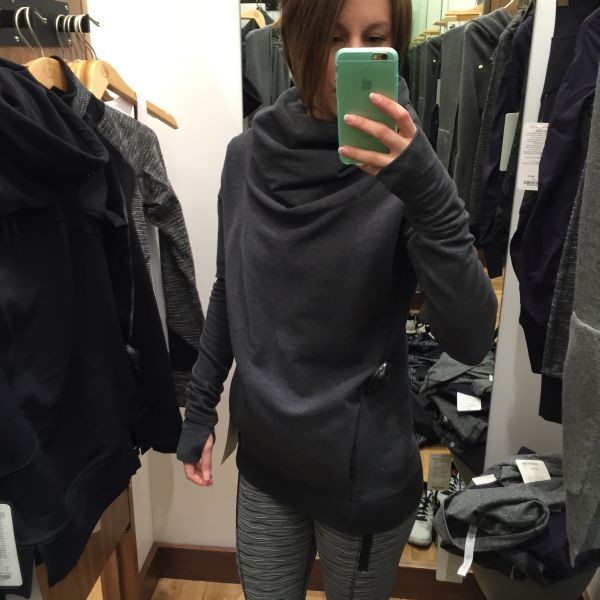 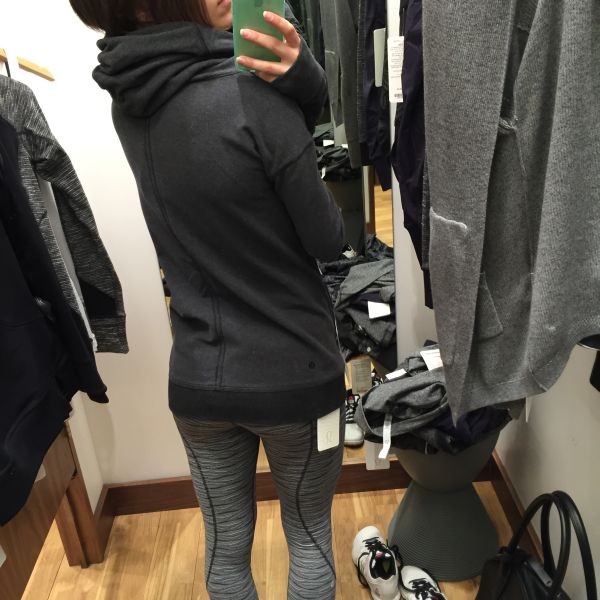 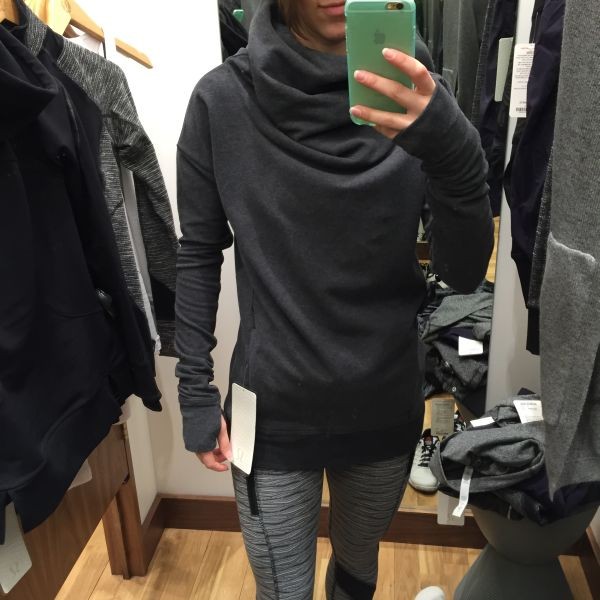 Lots of people have had great success with this pullover in their regular size.  Not me.  It was pretty comically large on me.  I think the fit of my true size in my older rest day pullover is much nicer.  I do like the length on this one, which is longer than my rest day.  And of course, the fabric is nicely soft and cozy.  A bit pricey for what it is, but if it’s a good fit, it’s certainly not a bad purchase (as evidenced by how well it has sold). 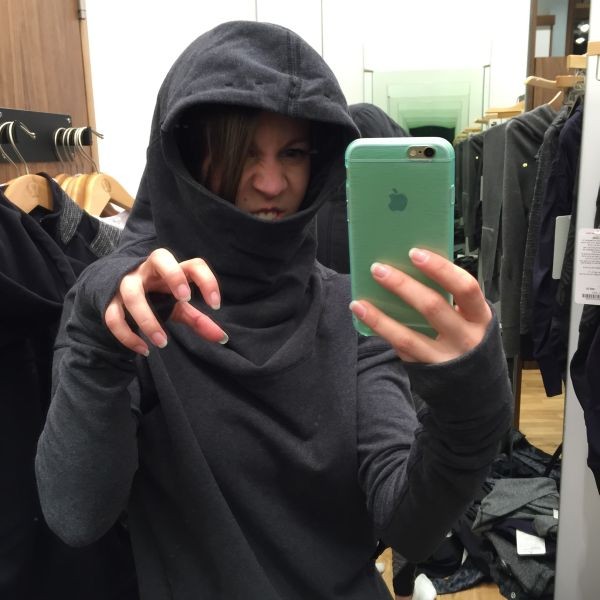 The hood, though.  I can’t help myself. 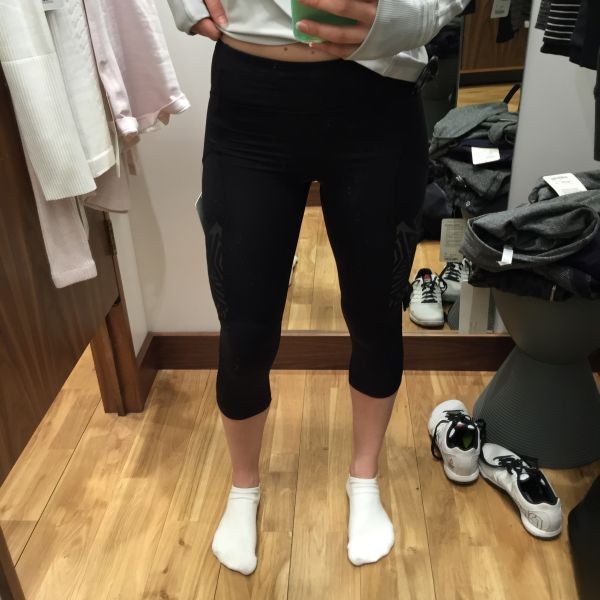 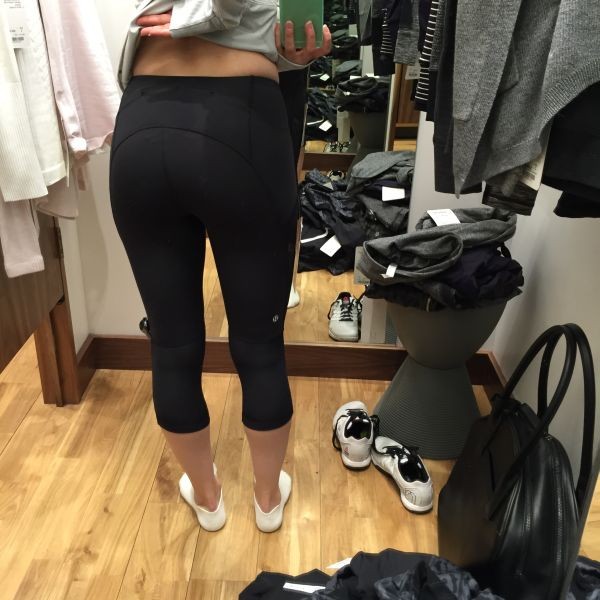 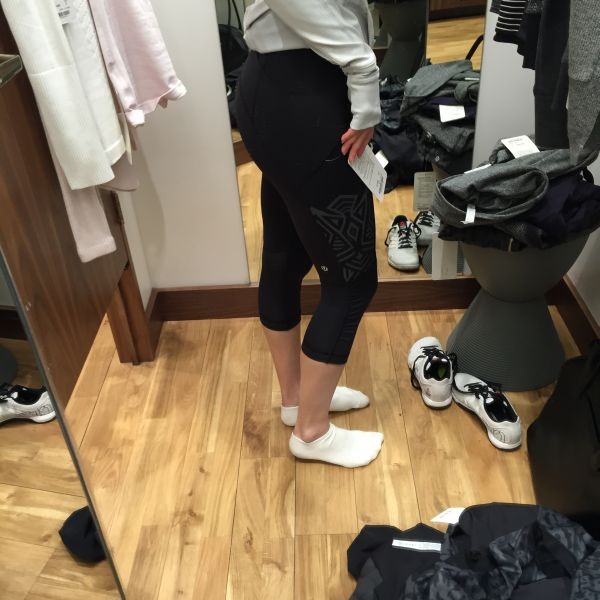 These run crops with a reflective tribal detail are pretty decent.  I liked the bit of ruching around the knee.  I think the rounded seam creates an odd long-butt-ish look, but not that noticeable, especially since tanks often cover this anyway.  These fit nicely in my normal size and were opaque.  A perfectly good pair of basic crops, especially if the zipper pockets bother you on lulu’s other crops.