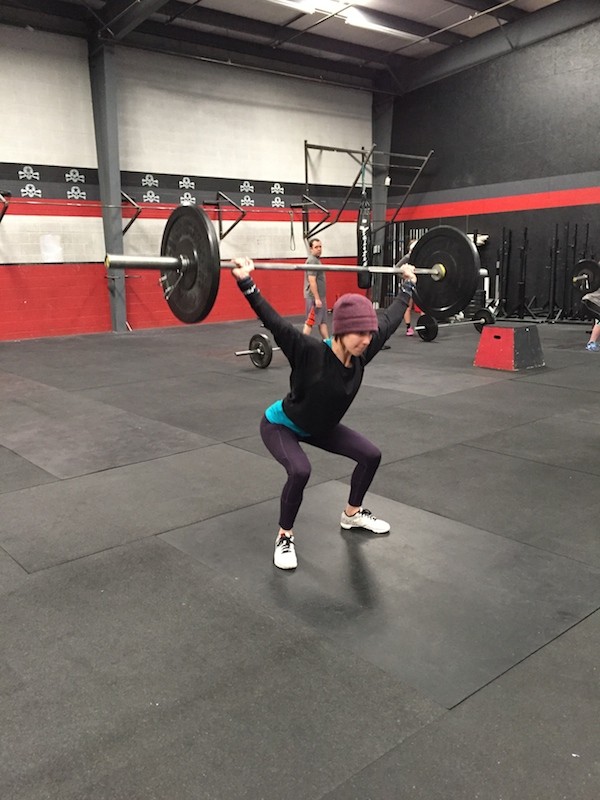 15.2 went off without a lot of fanfare.  That workout is a repeat from last year, and I still remember that day last March quite sharply.  The portion of the workout I was up against included 2 rounds of 10 overhead squats and 10 chest-to-bar pull-ups in 3 minutes.

Going in, I knew my squat and overhead position had gotten a lot stronger versus last year.  Last year, I was terrified about bringing 65# from the front rack to back rack position, this time it was SO much easier!  65# was and still is a fairly heavy overhead squat weight for me, so last year my score was a paltry 9 reps. 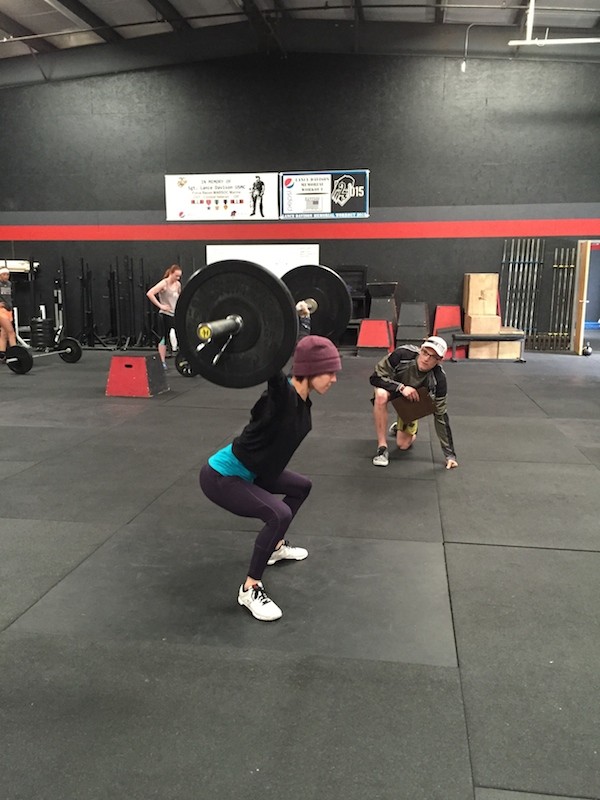 This year I went in much more confident.  I knocked out my first set of squats in 2 sets of 5.  I’m normally pretty strong on pull-ups, but I had to break them up into 3 sets because my sad little wrists were quite fatigued from holding the overhead position.  I got back to the bar and surprised myself by getting it up over my head in time to squeeze in 1 more rep!  That made my total score 21, a vast improvement over last year!  I would’ve loved to complete the allotted reps in those first 3 minutes, but let’s not get greedy. ;) 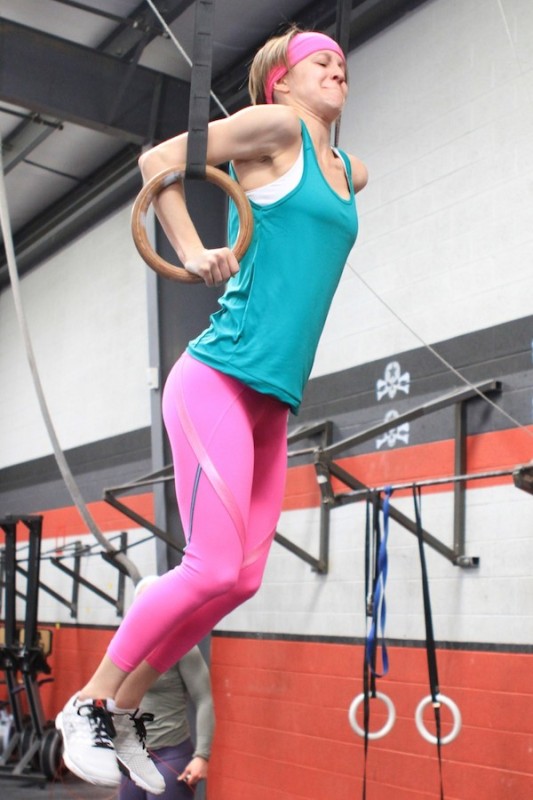 The CrossFit folks threw us a bit of a curveball with 15.3: muscle-ups were the first movement, meaning that if you could not do a muscle-up, you had to scale the workout.  I’ve been working on muscle-up progressions for months, so I figured it would be really good timing to get one.

The WOD was 14 minutes long, which ends up being a nicely limited amount of time to allot for muscle-up attempts.  You can do, at most, 8-10 attempts during that time with a reasonable amount of rest.  After that point, you’ll just get tired and desperate, which is a recipe for not only frustration, but also potential injury.

My first try was this past Friday.  Although I’d attempted muscle-ups a handful of times, I had never managed to get myself from the kip position to the “catch” where your chest is up over the rings.  So, my victory for the day was I got up over the rings two or three times.  I only managed to stabilize myself in the catch once, and it was on my last attempt.  I tried three times to lock out before I dropped off the rings, but I just couldn’t do it (see pain face above).  Since I’d made several attempts by then, I felt like I was just too fatigued.  I knew I’d have better luck if I tried again fresh.

My first try, I missed and didn’t get my chest over the rings.  After I shook out the jitters, my second try went a lot better. :)

I made a few more attempts before my 14-minute cap was up, but the one rep was all I had in the tank.  I’m still so pleased that I got one for this week’s WOD.  Getting this one rep catapulted my leaderboard rank up by 14,000 places.  What a difference a muscle-up makes!  I’m currently firmly in the top half of the leaderboard, which makes me really happy considering I was in the bottom 1% last year!!

Also: I am SOOO happy I got to skip out on the wall balls and double unders that were supposed to be later in this workout! ;) 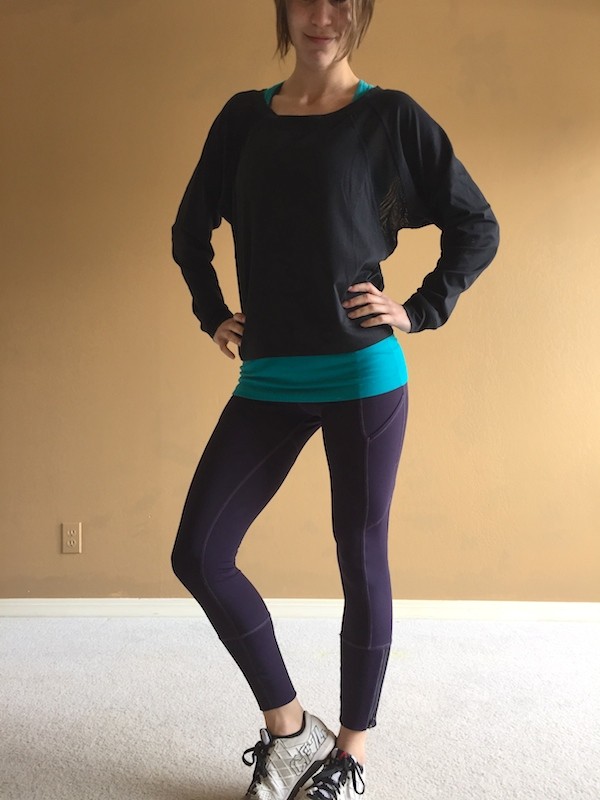 For 15.2, I wore my lululemon black grape rebel runner crops with a cool racerback in surge and Alala’s flash tee in black. 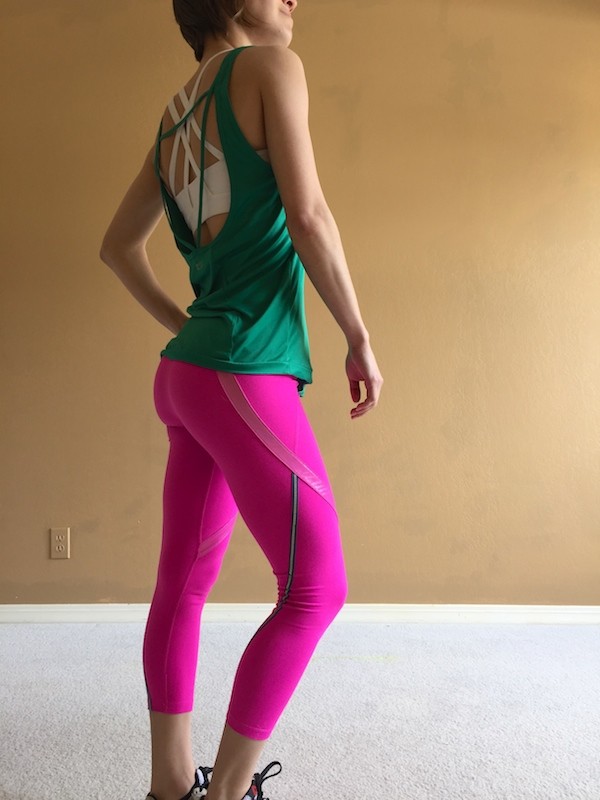 For 15.3 part 1, I wore my new Splits59 everest devon tank with nova trailblazer capris in hype. 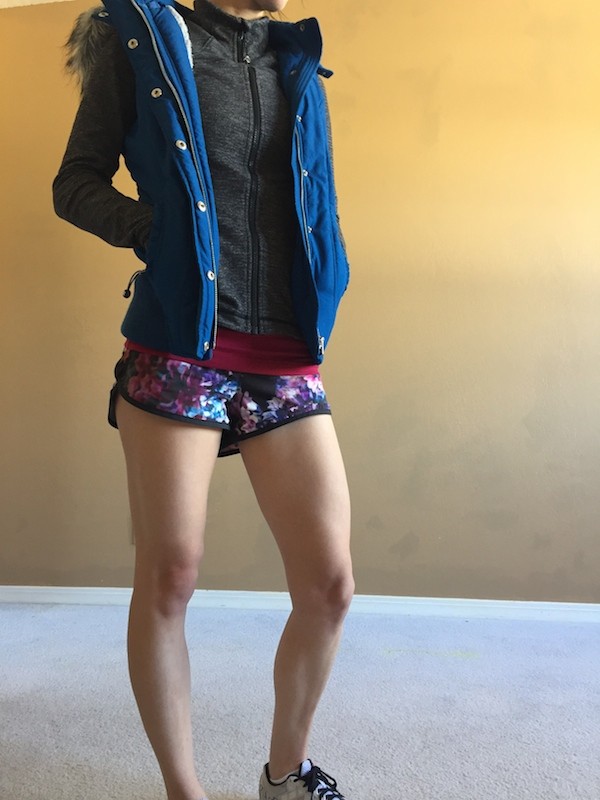 For 15.3 part 2, I wore my lululemon spring has sprung speed shorts, cool racerback in bumble berry, and mini check pique forme jacket.  To and from, I wore my Lorna Jane candy puffa vest in ocean. 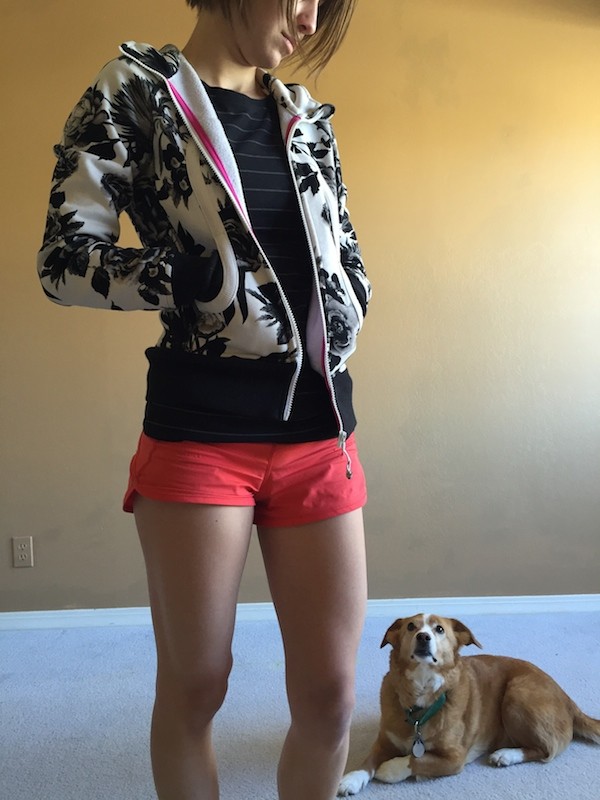 We’ve had some short bursts of warm weather lately, and anytime it breaks 60, I can’t help but pull out the speeds.  I really like to pair love red (speed shorts) with brisk bloom (scuba hoodie).  I think black and white patterns go beautifully with reds in general, and the floral pattern adds some femininity and playfulness to what’s otherwise a somewhat masculine color combo.  I also wore my black striped full tilt long sleeve because hey, it wasn’t that warm.

(Photobomb brought to you by my sweet and mildly obnoxious Pippin.) 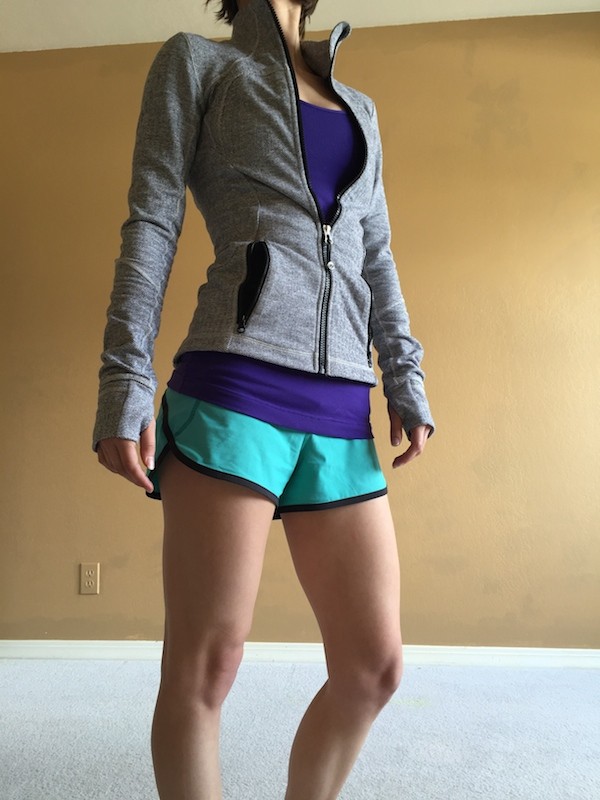 As above, I had to add another layer (white herringbone forme jacket) since it’s not quite summer weather yet.  Also, I really need some colored formes/defines.  All I have are the two in this post, and I’ve been wearing them so much this season!

I’m both eager and anxious to hear the 15.4 announcement tomorrow!  I really hope I don’t have to break my RX’d workout streak–not gonna lie, it’s been encouraging to be able to do 3/3 RX’d so far.  We’re still due for burpees, box jumps, and thrusters in this year’s Open, so I’m betting we’ll see at least one of those movements this week.  Historically, thrusters have always been last, so I’m thinking those won’t turn up til next week.  I would die of happiness if we got served up some handstand push-ups (my specialty!), but that’s probably about as likely as a heathered blue tropics CRB. ;)