As of just a couple weeks ago, this year’s CrossFit Open has wrapped up.  I previously posted about 15.1 as well as 15.2 and 3, so today I’ll recap 15.4 and 5.  Also, during this same time, my mom came to visit, so I got to do some fun and beautiful things with her around Arizona.

15.4 was pretty unremarkable.  I don’t even have an outfit pic–for shame!  During the announcement, I practically screamed with delight when handstand push-ups were announced.  I know a lot of otherwise strong athletes struggle with these, but they have always come naturally to me.  I cling to them as one of the few things that makes me feel like I’m kinda good at CrossFit. ;) Anyway, after the initial delight, my enthusiasm was very much dampened by the announcement of extra-heavy cleans, 125# for women, which would’ve required a 20# PR for me.  On the plus side, I’m pretty sure I would’ve literally cried if HSPU came after the cleans, so I was grateful that I would at least be able to put up a score with the order they chose.

I tried to warm up my clean for about half an hour in hopes of a 125# miracle, but unfortunately it was far out of my reach that day.  In light of that, I chose to lower the weight to 85#, which was a difficult weight for me that I felt gave me the same intended challenge for this workout.  I pounded out my requisite 3 HSPU, which was my official score, but continued on with my lighter cleans for a total score of 53.  Now, if only more than the first 10 seconds had counted… 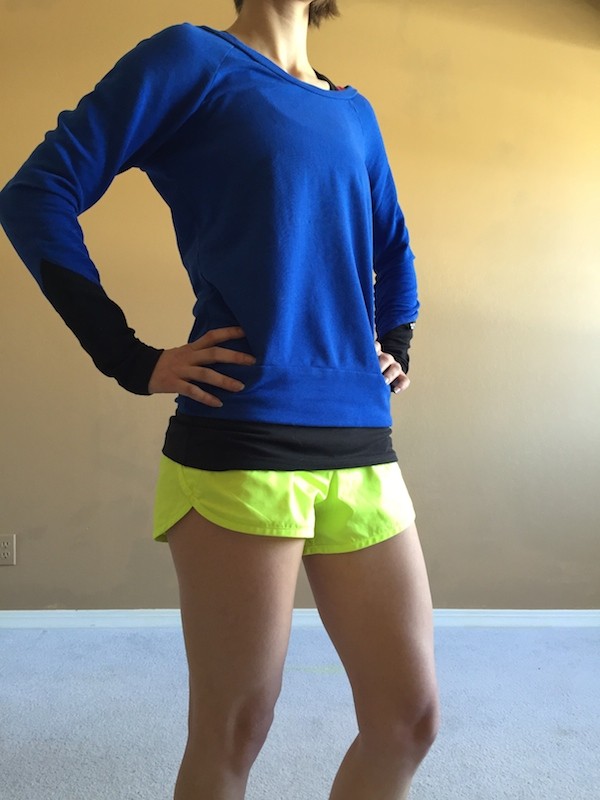 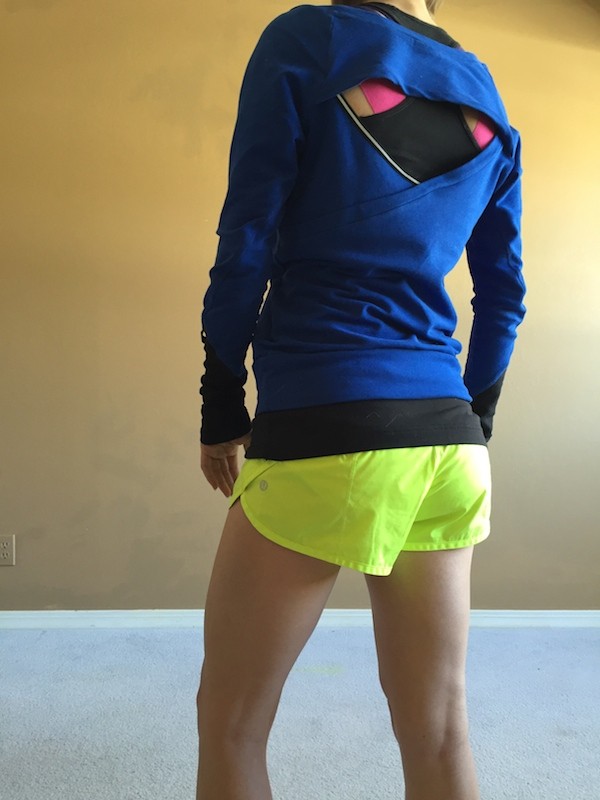 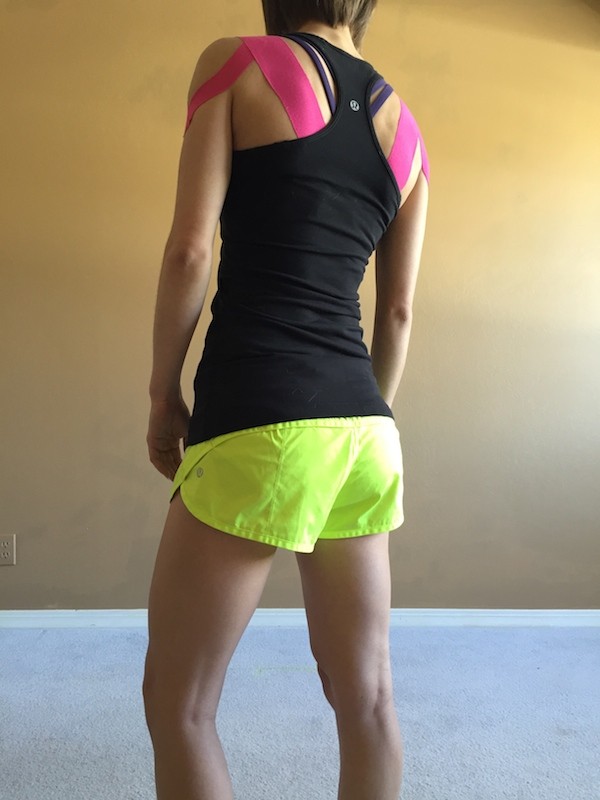 65# thrusters always show up at the end of the Open, and 15.5 was no exception. (Though I was surprised this year’s Open didn’t end up including ANY burpees!) This was a source of dread for me since this is a heavy thruster weight for me.  Last year, it took me almost 50 minutes to finish off the 84 total thrusters assigned (and the 84 bar-facing burpees).  This year was mercifully shorter with only 72 total reps, plus rowing, which to me felt easier to chip away at versus burpees.

I was really pleased with my pacing for this one.  There was a lot of pain involved in this workout, but I was steady for the whole 29ish minutes it took me to finish up.  I often go out too hard and burn out, so I was happy I stayed steady. 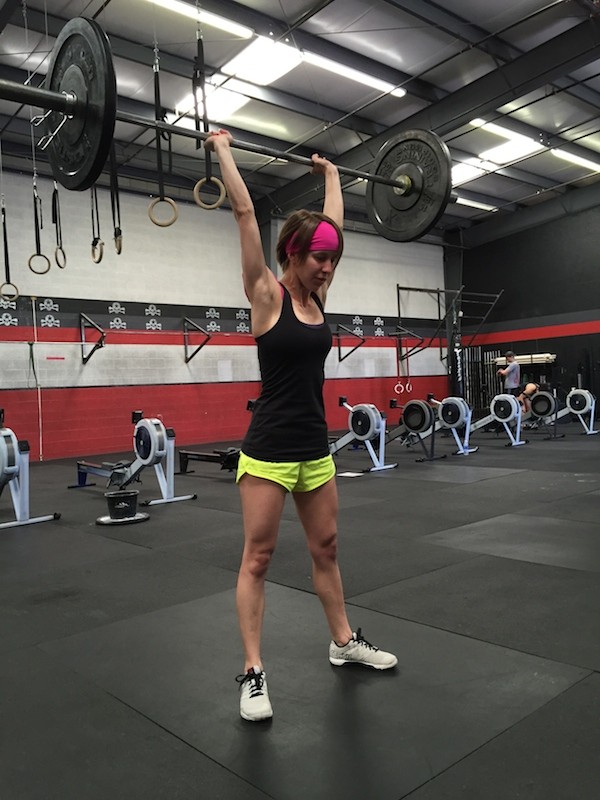 Although there was nothing special about the last 2 events, I’m pleased with the overall outcome of this year’s Open for me.  I was able to submit a score for all 5 workouts as RX’d, which was a big victory.  I reached 2 major milestone PRs, including a bodyweight clean and jerk and a ring muscle-up, plus a massive PR on my snatch, too.

In 2014, I placed in the mid 44,000s, aka the bottom 1% of all athletes worldwide and in my region.  That was pretty demoralizing since I had been working really hard and felt like I was in ok shape.  This year, I placed just better than 28,000th worldwide, which put me in the top 47%.  Granted, with the addition of the scaled division, comparing these isn’t quite apples-to-apples, but I placed significantly better in both absolute numerical terms and relative percent terms, so I think it’s safe to say I have improved tremendously over the past year.  One of the satisfying things about fitness is how you can look back and point to concrete numbers that tell you that you’re fitter and stronger than ever before. 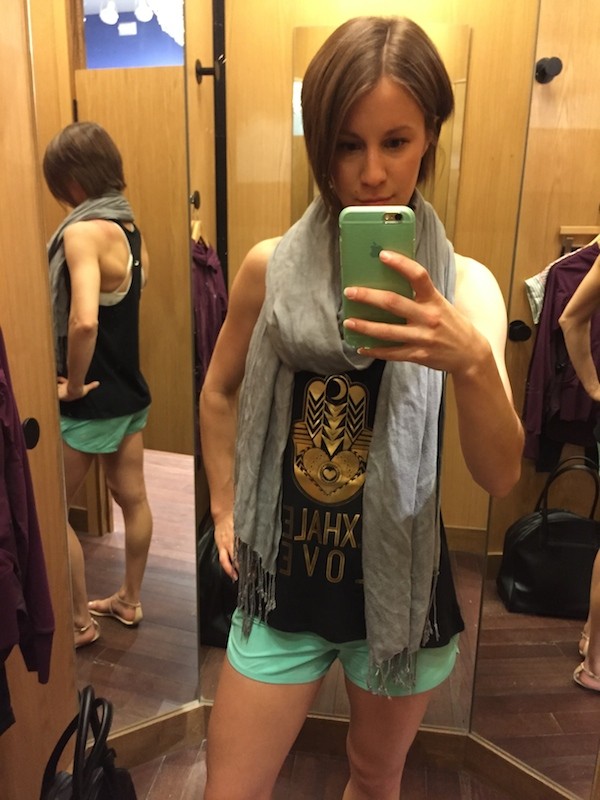 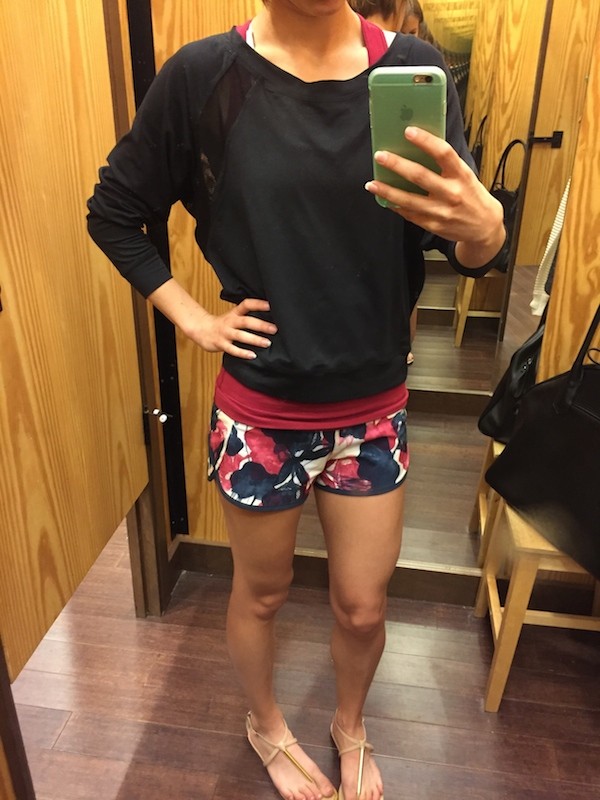 I went on 2 separate store visits (resulting in my recent try-on reviews) to the city aka lulu-land.  Pardon the lulu dressing room photos of these outfits. :) Even though only 150 miles separate them, there is pretty consistently a 30-50 degree temperature swing between my home and the city, so it’s always awkward to dress for these trips.  I often end up having to throw sweatpants and random layers in the car to shed or add as necessary. 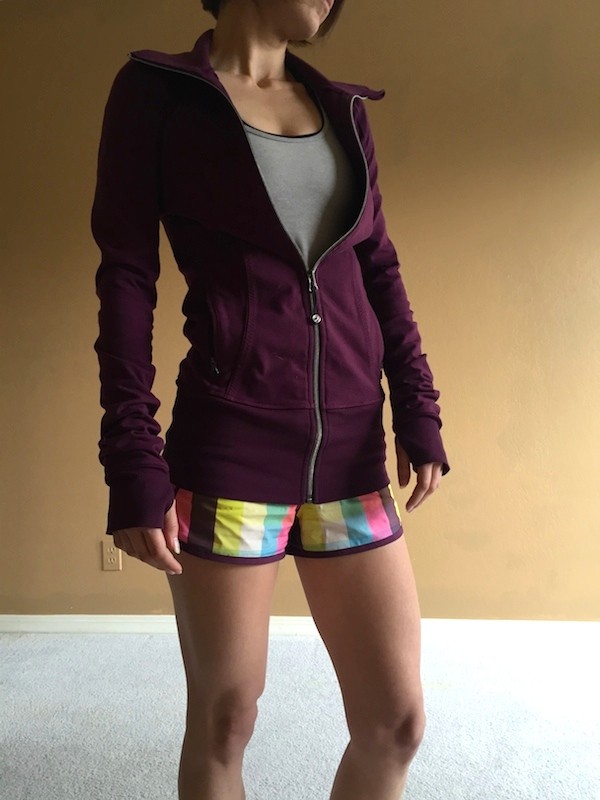 My mom and I drove to Sedona for the day to hike Bell Rock.  We successfully climbed almost the entire way up and shared some beautiful vistas along with a kind of messy chicken mozzarella sandwich.  Bell Rock is one of several vortex areas in Sedona, which are thought by some to hold unique spiritual and healing powers.  Although we didn’t feel any vortex magic, the beauty is still pretty compelling (see below). :) 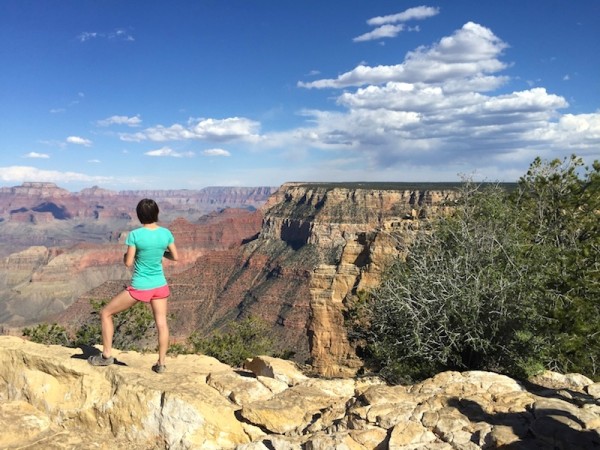 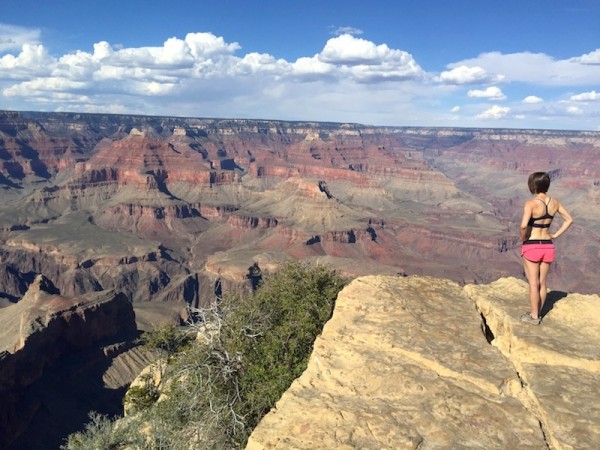 On our last full day together, we went up to the Grand Canyon to soak in more beautiful weather and natural beauty.  I’m lucky enough to live only 90 miles from this famous place, so we were able to decide on a whim to make the trek up.  We hiked about a mile down Bright Angel Trail, which was the first time either of us had actually been *in* the canyon.  Since the view down Bright Angel is the same for the portion that would be feasible for us to complete, we turned back pretty quickly in favor of seeing more varied scenery by walking along the Rim Trail.  Heading up this way was the perfect decision, because along our walk, we saw multiple sightings of at least 4 California condors.  These birds are extremely rare, with only a few hundred known in existence and even fewer in the wild.  This was particularly special for my mom, who has a passion for wildlife.  Since the species came stunningly close to extinction about 25 years ago, the privilege of seeing them in the wild was not lost on her. 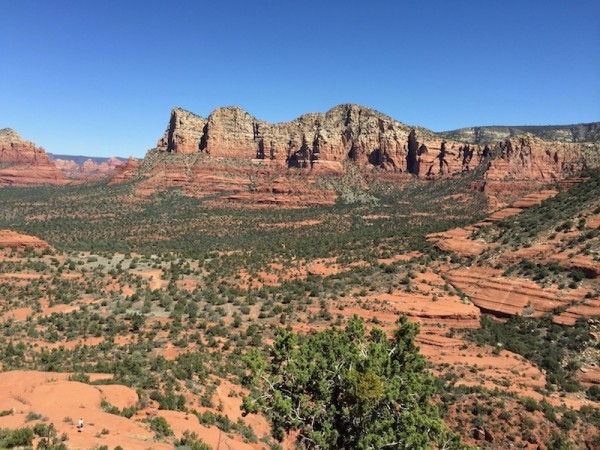 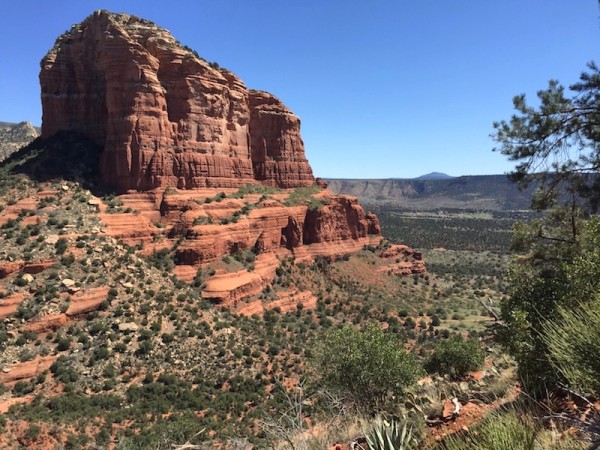 The view from Bell Rock. 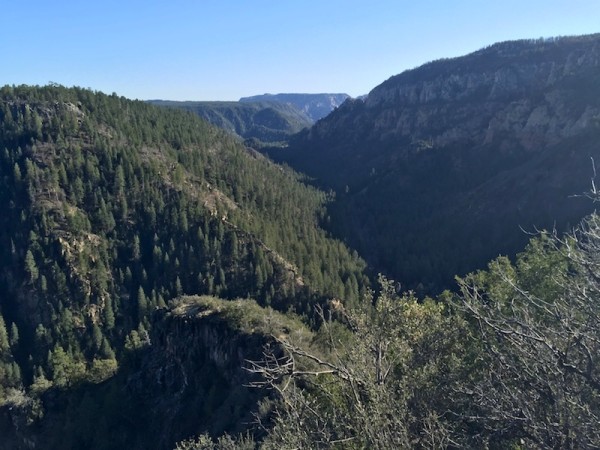 Oak Creek Canyon: on the drive to Sedona, the road plunges 1000 ft in just a couple short miles to reach the bottom of the canyon.  While driving switchbacks along the canyon wall is terrifying the first couple of times, this drive is insanely beautiful. 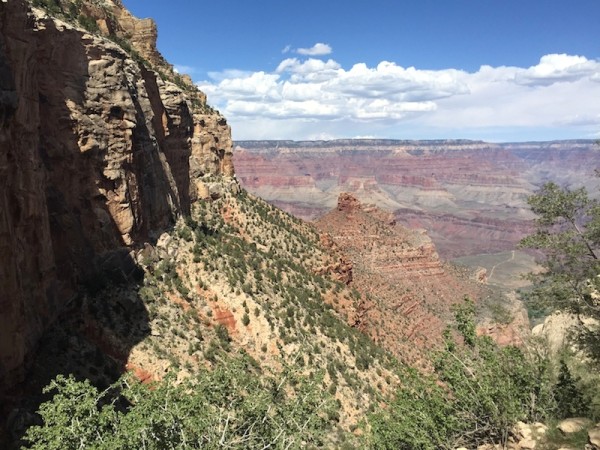 The Grand Canyon from a little ways down Bright Angel Trail. 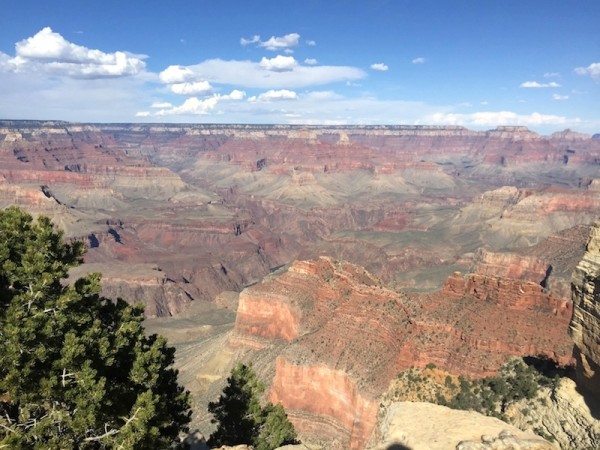 The Canyon goes on and on and on in every direction. 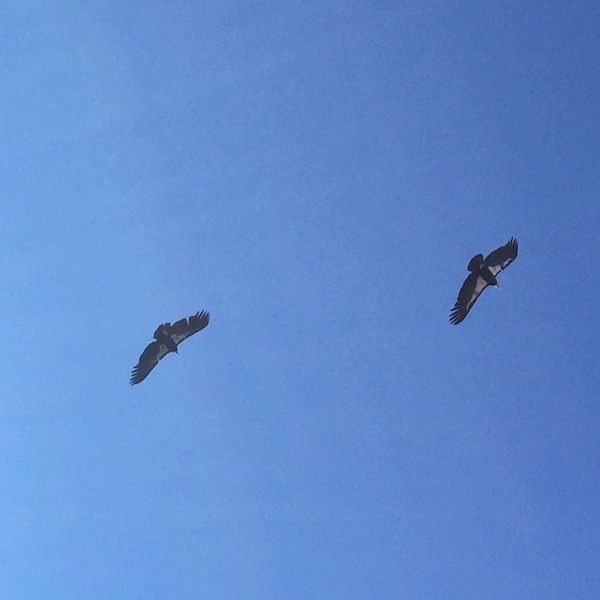 California condor sighting.  Their massive 10 ft wingspan makes them among the largest birds out there. 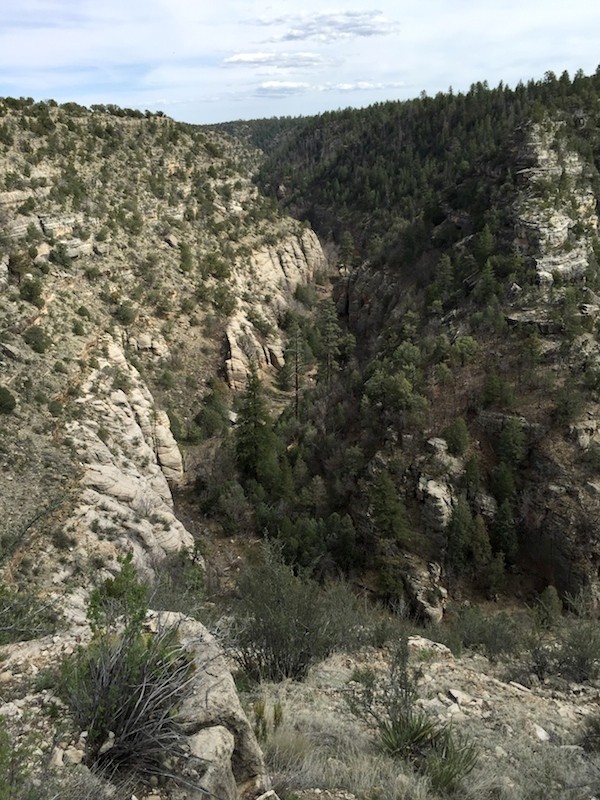 Walnut Canyon, settled hundreds of years ago for a brief period by the Sinagua people, who made unique homes in the sides of these cliffs.  Northern AZ is full of canyons, if you’re not picking up on that. ;) 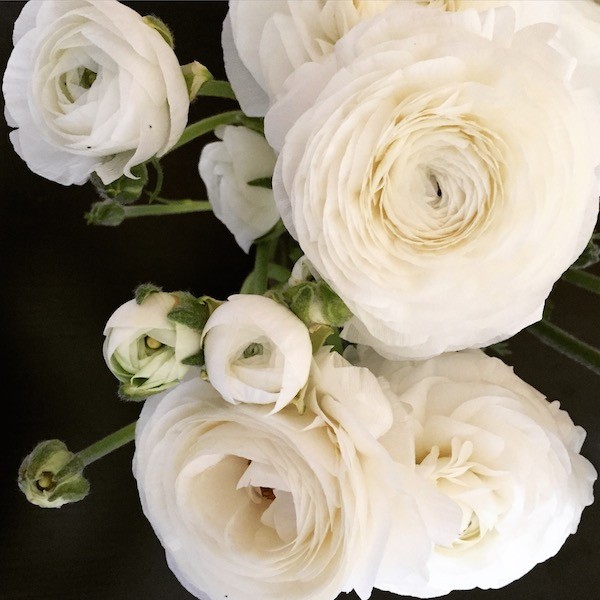 Ranunculus I picked up to brighten up the guest room.