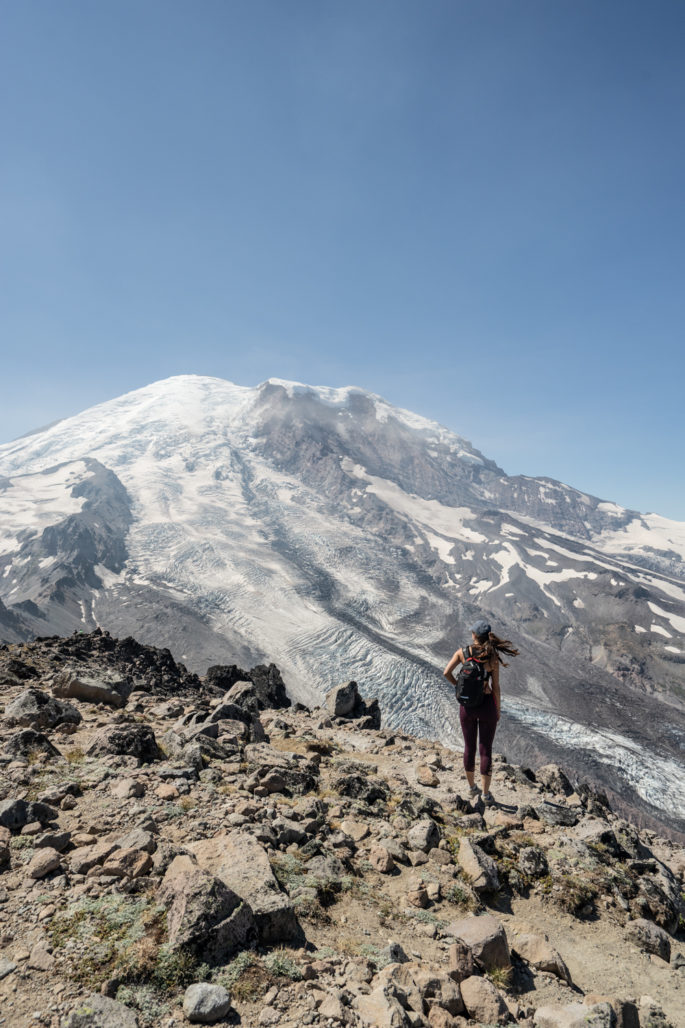 For nearly 5 years now, I’ve lived at 7,000′ above sea level in Flagstaff, AZ.  Before I moved here, I always lived at sea level, and figuring out what the deal was with high altitude was quite the adjustment!  I love living at altitude, but it’s definitely its own beast.

Here are a few facts as well as my own experiences on what altitude is really like.

The percentage of oxygen stays the same, but the number of oxygen molecules doesn’t

The percentage of oxygen at high altitude or at sea level is constant: it’s always about 20.9% by volume.  The reason that there’s “less” oxygen is that the atmospheric pressure and density of the atmosphere is lower.  The decreased pressure means there is less force pushing the oxygen into your bloodstream via your lungs.  The decreased density means that overall, there are fewer of all gas particles in the air, including oxygen.  Both of these make it harder for your body to take up oxygen.

That said, at 7,000′ where I live, it feels like there’s only 16% oxygen due to the lower atmospheric pressure.  That’s about a 23% decrease, which may not sound huge, but it has a pretty enormous impact to your physiology.  Phrased another way, for every 4 breaths you take, it feels like you only took 3.  When you’re working out, you can imagine how that would make things a lot harder a lot faster.

As another reference point, the “death zone”–so named because there is not enough oxygen to support human life without supplementation–starts around 26,000 ft, where it feels like it feels like there’s 7.8% oxygen, about 37% (or a 63% decrease) compared to what you feel at sea level.

The sun will scorch you

No, it’s not because you’re “closer to the sun.”  The distance of the earth from the sun is so enormous that a few thousand feet makes absolutely no difference.  The real reason the sun is stronger is that the atmosphere is thin, meaning there are less gas particles to absorb and block the UV rays on their way to you from the sun.  One way to think of it is that the sun’s rays have a more direct path straight to your skin.

On the positive side, being in the sun feels 10-15 degrees warmer here than it would at lower elevations.  The sun is so strong that even in winter, standing in the sun feels really good and can really help on very cold days.  As a perpetually cold person, the heat of the sun here feels amazing.  I love to bask in it, and so do my dogs.

That said, on the not-so-positive side, you have to be careful, because the hotter sun also means more harmful UV exposure to your skin.  At altitude, you can easily get sunburnt even in the dead of winter.  This also means many people who live at altitude show skin aging faster due to the higher amounts of UV exposure in daily life.

It’s unclear whether high altitude increases your risk for melanoma.  Increased skin cancer rates in certain areas, like Colorado, may be attributable to other factors such as attitudes toward sunscreen and percentage of people who spend time outdoors.  In other words, it’s tough to say exactly whether high altitude is the driving factor or if it’s actually something else.  Even though there’s no empirical evidence that I’m aware of right now, it seems logical that not-so-diligent sunscreen use combined with a lot of time outdoors at high altitude could increase your risk of skin cancer.

You will adapt, but it will never feel easy

Exposure to high altitude, especially for long periods, induces a lot of changes to your physiology.  For example, the amount of hemoglobin (the protein that carries oxygen around in your blood) increases.  So does erythropoietin, a protein that stimulates an increase in red blood cell production.  Besides these and other changes I didn’t include here, there are probably more that aren’t yet understood by the scientific and medical communities.

Although some acclimatization occurs in a matter of a couple of days, full acclimatization takes months.  Personally, I didn’t feel fully adapted until I had lived here for about 6 months.

Most people start to feel the effects of altitude around 4,000-5,000 ft.  Below those elevations, you really don’t notice.  That said, everyone’s body responds differently to altitude.  Some people are like mountain goats and it barely slows them down.  I’m super jealous of these people.  Others feel like it knocks them right on their butt.  I’ve always been a little closer to the second kind of person.  I never like to make things easy for myself when I train, so I welcome the extra challenge of thinner air.

Persistent training helps a lot, but even so, training at altitude always feels a little harder than it should.  You can never acclimatize well enough to completely compensate for the effects.

Coming back to sea level is (usually) awesome

Once you’ve adapted, you get to enjoy the full effects of sweet, sweet oxygen!  Because your body has undergone many changes to more effectively utilize oxygen, those changes don’t disappear as soon as you descend to lower elevations.  For that reason, you get a boost of fitness above your normal, non-altitude level of fitness for a short time, almost like a natural form of blood doping.  That spike is one reason why so many elite athletes train and even live at altitude.

How strong the effects are depends on how long you’ve been at altitude as well as your individual physiology.  On top of that, the effect of coming down to sea level always seem to vary for me.  Sometimes I feel unstoppable, like I can go forever.  Other times I’ve felt no perceptible difference.  Of course, a lot of variables go into this, like travel stress, general fatigue, and weather.  But when it happens, it’s so awesome to just magically feel like a beast for a little while.  Imagine the BEST workout you’ve ever had where you felt rested and super strong.  It’s kinda like that–probably even better!

The “blood doping” effects of altitude last for somewhere around 2-4 weeks upon return to sea level.  I’ve always been curious where the peak effect kicks in (obviously it doesn’t go from 100% to 0% overnight!), but I’ve had a hard time finding information on this.  Personally, I notice I’m most likely to feel the effects on the second or third day.

High altitude effects are not linear

The relationship between altitude and atmospheric pressure is pretty linear, but that’s not the whole story!  When you breathe, the oxygen you inhale sets off a whole cascade of biochemical binding (and unbinding) events, such as the binding of oxygen to hemoglobin, the protein that carries oxygen in your red blood cells.  The less oxygen that’s in your bloodstream, the less tightly that binding occurs.  If you want to visualize the kinetics of how this works, take a look at this graph.  Notice that it’s not linear–it has an S shape.

If physiology isn’t your thing, just believe me (and the scientists who have studied this) that altitude effects on your body get more and more pronounced the higher you go.

From personal experience, I notice a huge difference between 7,000 ft and 8,000 ft.  Things start to get pretty spicy at that point.  Approaching 9,000 ft and higher, I can’t run without losing my breath basically immediately, I can only hike.

There’s a hike here that reaches about 12,600 ft, and climbing that last 1,000 ft is brutally, painfully slow.  It really surprises you how quickly you feel worn out!

Ok, this is a little off-topic, but it matters to me because I absolutely love to bake!  Baking is a science, and the difference in atmospheric pressure has a huge impact on how tasty treats turn out.  As an example, one of the telltale signs is crater-like cakes.  The batter starts out rising too fast, but then it can’t hold its own weight and collapses in the middle.

That said, after years of practice, I’ve learned a ton about the art of high altitude baking.  If you live at high altitude and are looking for tips, I highly recommend King Arthur Flour’s information on high altitude changes.  I follow it religiously, and it works every. single. time.  What’s most helpful is that it breaks things down according to your altitude, which is important because high altitude baking is very much NOT one-solution-fits-all-altitudes.

If you’re a runner, you can use Jack Daniels’ calculator to input a recent result, then guesstimate your pace at a different altitude.  This is handy if you’re ever planning a race at an unfamiliar altitude.  Again, every body is different, but it gives you a reference point so you don’t feel like you’re completely guessing.

My fastest mile at altitude was 9:09, but my fastest mile at sea level was a blazing 7:44!  As you can see, the difference was huge.  Of course, other factors that could be contributing like nutrition, the relative hilliness of the two routes, errors in course distance, and simply the training effects of running a mile 6 times when it wasn’t something I normally did (my last mile was my fastest).  Still, there was no doubt it made me faster.