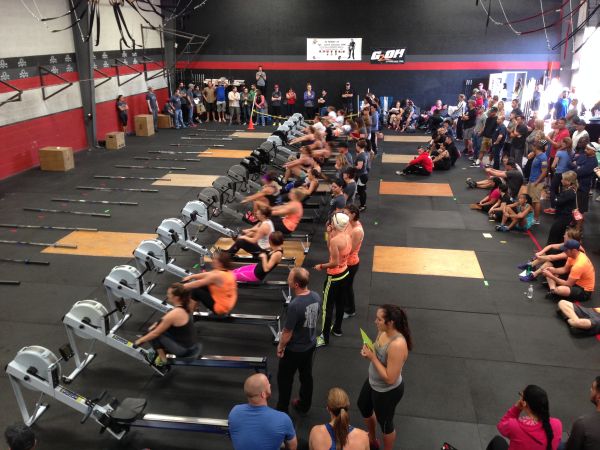 As I wrote at the beginning of this month, I had my first CrossFit competition this month!  This was the scene during “Jackie”, the 2nd WOD of the day.

I wore my Splits59 nova trailblazers in hype, which I bought expressly for the purpose of this competition–first competition warrants new pants, yes?  I kept it simple with a black cool racerback and let the pinkest of pink pants take the spotlight. 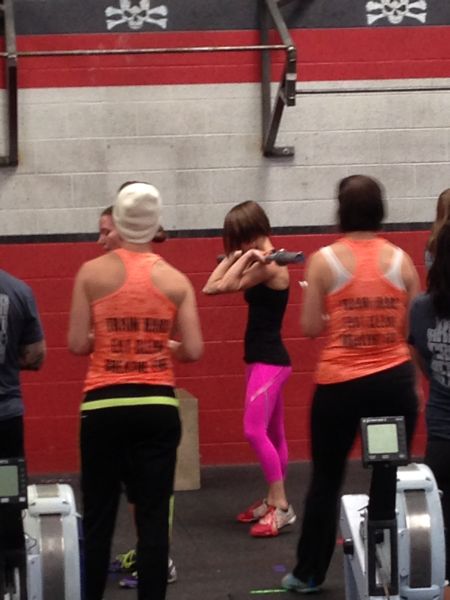 50 thrusters at nearly half my bodyweight was, well, pretty motherloving rough.  The WODs were originally announced with a 15-minute cap for Jackie, and I was really bummed when they cut it to 12 minutes.  The shorter cap didn’t leave me enough time for pull-ups, i.e. the one movement in the WOD where I stood a chance at catching people.  I finished the thrusters with literally 10 or 15 seconds on the clock and was able to knock out 7 of the 30 pull-ups, which was more than I would’ve expected in such a small window, but obviously less than I would’ve liked. 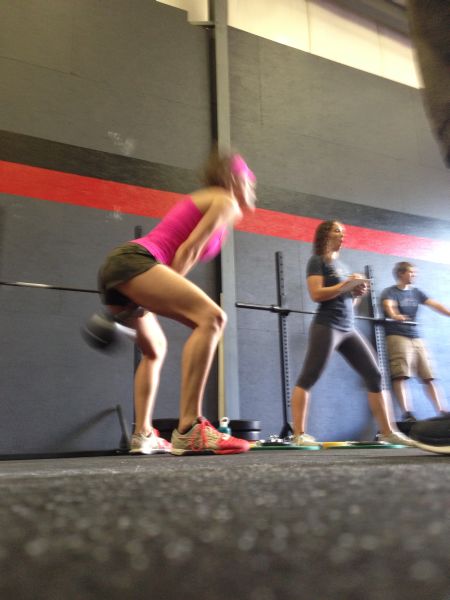 Although it was quite chilly in the morning, it warmed up in the afternoon so I swapped my novas for my trusty speed shorts in fatigue camo and more pink (paris perfection cool racerback).  I spied another lady who had also changed into her fatigue speeds and I nearly swapped them for my inky florals (of course I brought backup), but then I saw that she changed into her fatigue tech mesh crops–HAH, I win!

After Jackie, I had a WOD with 10 minutes to find a 1RM back squat. I easily back squat 140 the last time I went for a 1RM (I might even be able to do 150), but after the thrusters wrecked my legs, I could only muster 125–not very impressive with other girls hitting numbers well over 200.  Right after squatting, we had 2 minutes to accumulate as much kettlebell swing weight as we could.  We chose the bell, and the reps were multiplied by the weight, which I thought added an interesting strategic element.

I gamed the crap out of the final WOD of the day (there were 2 more I didn’t talk about–Annie and a shuttle sprint EMOM–for a total of 5 WODs).  It was an 8 min AMRAP with alternating minutes of bar facing burpees and deadlifts.  The catch: your burpees were scored separately from your deadlifts.  Now, the prescribed 155# deadlifts were way too heavy for me because my deadlift is embarrassingly weak (I squat about the same as I deadlift–what?).  That said, I can cycle bar facing burpees like nobody’s business.

So, I did 0 deadlifts.  None, zip, nada, zilch.  I didn’t even touch the bar and instead took a full minute of rest while everyone else burned themselves out on the deads.  I knew that even with max effort, my placing in the deadlift portion would be last place or close to it, so instead I saved my strength (and my back) and focused on nabbing a super-high rank on the burpees.

It turned out to be a good strategy: I got 2nd place in the burpees* and happily accepted my dead-last deadlift rank.  Considering my average ranking for the WODs was in the bottom half of the pack, averaging these to a rank in the middle was way more preferable than taking 2 low ranks, and it moved me up by a couple slots.

*Some lady beat me out by 1 rep AND she was doing the deadlifts–swear words were uttered.  I mean seriously??  Gawd.

Overall, I have to say I was a little disappointed in the day.  First of all, I had been under the weather 2 days before, so I assume my body had some crap floating around that was stealing some of my energy.  More to the point, basically all of the WODs hit my weaknesses: the shuttle sprints highlighted my slow running, my weaknesses in Jackie held me back such that I got time capped before I could get to my strength, Annie was a disaster with my unfortunate double unders, etc etc.

Going in, I had set what I felt was a modest and realistic goal for myself: I wanted to place in the top half of the female division (due to the structure of the WODs, they didn’t need an RX and scaled division, so we were all together).  Instead, I placed 23rd out of 27, which frankly was not even close.

I love to be great at what I do, and I love competitions because I love measuring my abilities and pushing myself to the limit.  I’ve worked extremely hard in my 1.5 years of crossfitting, and I think it’s safe to say I take it more seriously than many (most?) others.  I don’t CrossFit to “get toned” or even just to “have fun” (although I do!), I’m there because I truly want to perform well.  I know that being the best in the world is not in the cards for me, but I DO strive to be reasonably good at it. (Who doesn’t want to be good at things they like?)

With that in mind, it’s hard to see all my hard work add up to something highly unremarkable.  With a few exceptions, most of the time I perform roughly on the same level as women who are older, pregnant/recently pregnant, new to CrossFit, scared of the barbell, or very much out of shape.  Now, I don’t mean to be rude or condescending, I only say this to point out that I don’t measure up to those who are at similar stages of their fitness journey and/or have similar goals as I do.  In other words, my peers in theory (or who I want my peers to be) are not the same as my peers in practice.  That makes it hard not to feel left out or inadequate.

Being a competitive person, I struggle a lot with this.  You can tell yourself “it’s just you against yourself” or whatever all day, and yes, some days I do feel proud on an individual level, but it’s hard to not be affected and discouraged by the bigger picture.  I wish I had something positive to say here, like “I spent time thinking about it and I had such and such revelation and now I feel great!” but truthfully I don’t.  I’m still trying to figure out how to emotionally reconcile my hard work and my desire to be excellent with my disappointing results in competitions and in daily WODs.

So there you go. #realtalk 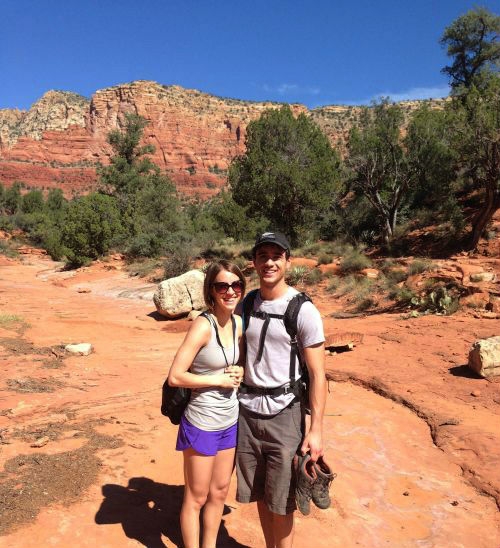 There is really nothing remarkable here about my combo of my heathered medium grey CRB and bruised berry speeds, although what WAS remarkable–in the worst way–was the fact that shortly after this pic was taken, I snagged my speeds on a thorny bush.  There’s about an inch of looped thread sticking out that I haven’t yet mustered up the courage to try to fix.  These are the hazards of wearing 4-way stretch, my friends. 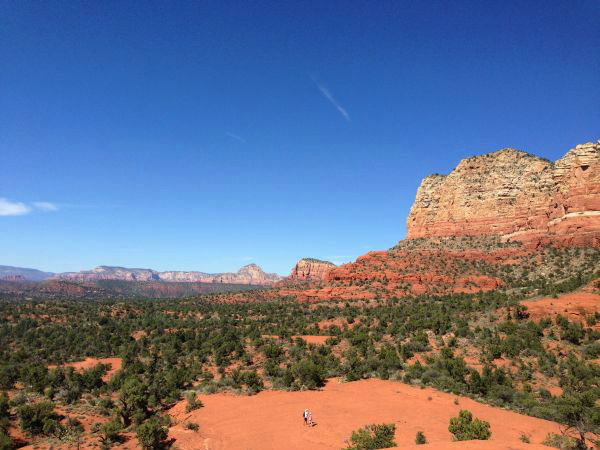 Of course, the remarkable part wasn’t what *I* wore, but what the earth wore, if you’ll excuse the cheesiness.  We drove down to Sedona with a small group of friends for a low-key 6-mile hike.  Sedona is almost other worldly in its loveliness, and I’m lucky to have it basically in my back yard.

Speaking of other worldliness, a lot of people actually believe Sedona possesses extremely strong spiritual qualities, particularly for its vortexes.  The vortexes are sites that are claimed to have electromagnetic properties that greatly enhance healing, meditation, prayer, and experiencing whatever divinity you prefer.  A pamphlet I read from the National Park Service cited one study that found 64% of the many, many tourists who come to Sedona are seeking some kind of spiritual experience.  Our hike circled Bell Rock, a popular vortex destination. 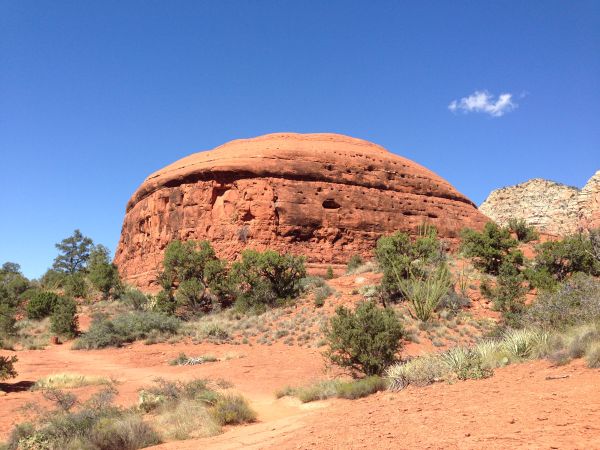 We found this rotunda rock formation along the trail, and it turned out that you could get up on top of it on the back side without too much trouble.  The vistas from the ground were nice themselves, but the top of the rotunda offered even better vantage points (click through for bigger versions, if you are so inclined):

These are the things that make northern Arizona feel like a really cool place to be. …Even though I live 2.5 hours from lulu. 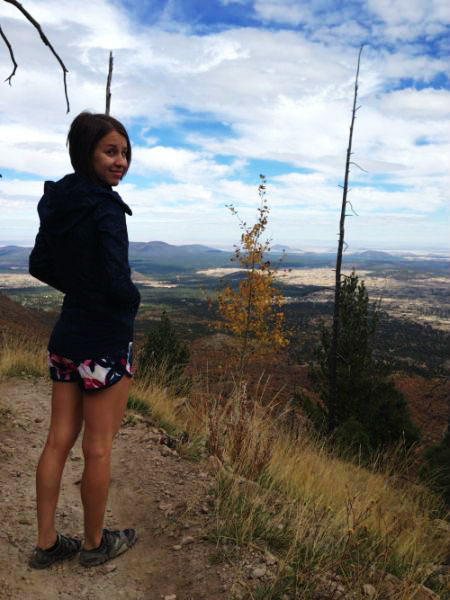 Last weekend, my honey and I went on a 10-mile hike out to the top of one of the mountains in town.  This one is smaller, “only” 9300 ft (keep in mind, we start at about 7000)–we haven’t tackled the other one yet, which is about 12,500 ft.  I wore my laceoflage embossed inkwell keep it up jacket (which I happen to think is a pretty underrated jacket) with a full tilt long sleeve and inky floral speed shorts.  It was a tad on the cold side and cloudy to boot, so this ended up being just the right level of warmth for my core while keeping my legs cool.  Plus, I’ve never really liked hiking in crops for some reason. 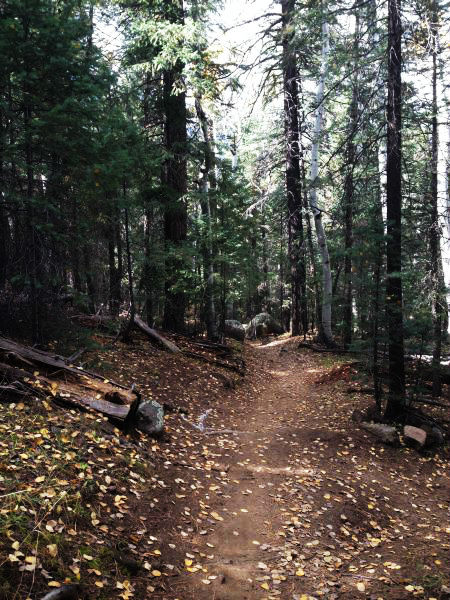 This side of the mountain reminds me a little of the east coast: dense and woody. 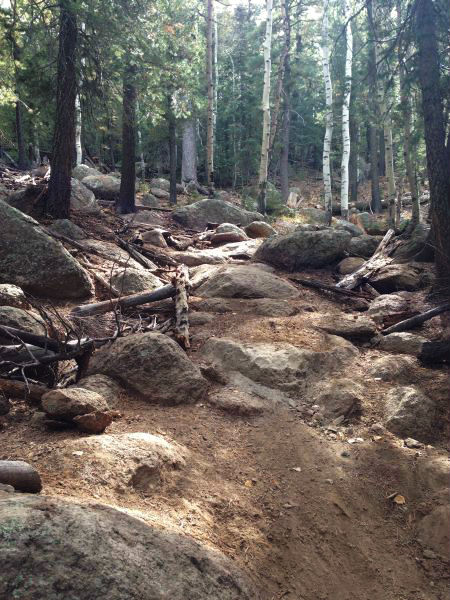 People actually mountain bike through here!  They call it the “hobbit forest”, which is a name I can totally get behind.

In the second half of the hike toward the top of the mountain, we hiked along a ridge with some really cool vistas (click through for a bigger version).  The tip you see near the center of the picture is where we hiked to.  This side of the mountain looks and feels very different from the other–much more exposed and dusty/dry. 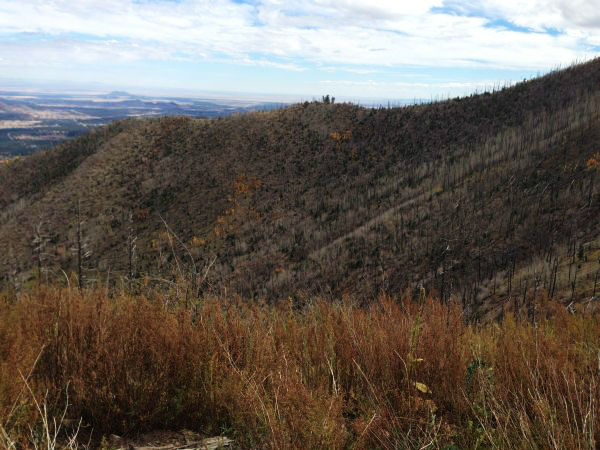 This picture makes Smokey the Bear sad: a 15,000 acre wildfire in 2010 devastated the back half of this mountain from what was believed to be an abandoned campfire.  Some of the vegetation has grown back, but it still has a long way to go. 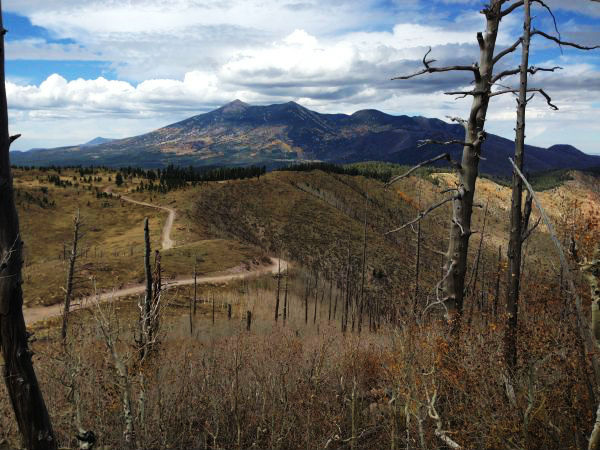 From the 9300 ft summit, looking toward the larger mountain.  There are a lot of radio towers and things at the top, hence the road that leads up to to the top.  If you look left from this vantage point, this mountain overlooks town–we could see our house from the top, and I can see the top where we hiked from the window in the room where I’m typing right now.

Also: I saw a tarantula near this part of the trail, but I’ll spare you the pic. :) 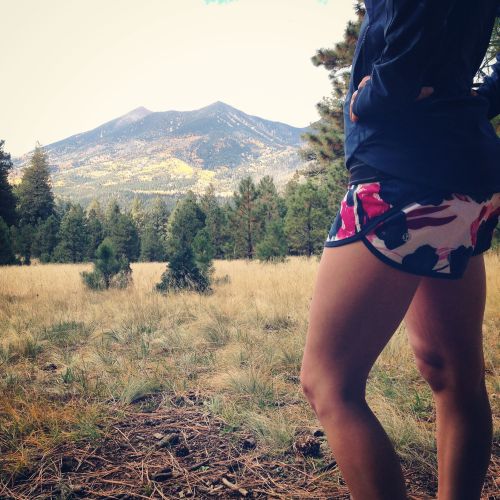 On the way back, I got one of my most favorite picture that I’ve instagrammed so far.  This is in the valley between the two mountains. 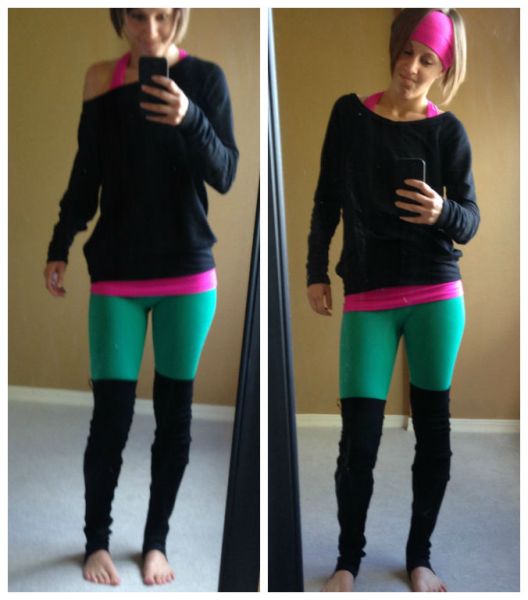 Nope, I did not wear this ironically.  Yup, it is totally 90s fabulous.  That said, I would probably wear this again because apparently I give zero bothers.  Apparently 7-yr-old me is still in there somewhere and she still likes wearing leggings and weird color combos. 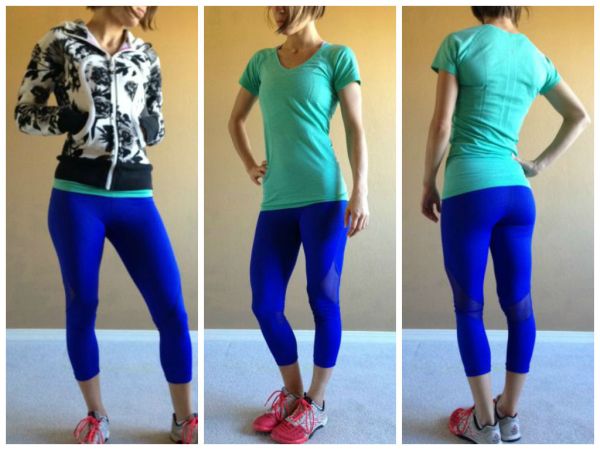 This, on the other hand, came out much more, you know, grown up.  I loved how the bali turned out with the cobalt–I’ve really been liking the way jewel tones pair with a lighter, more airy color for contrast.