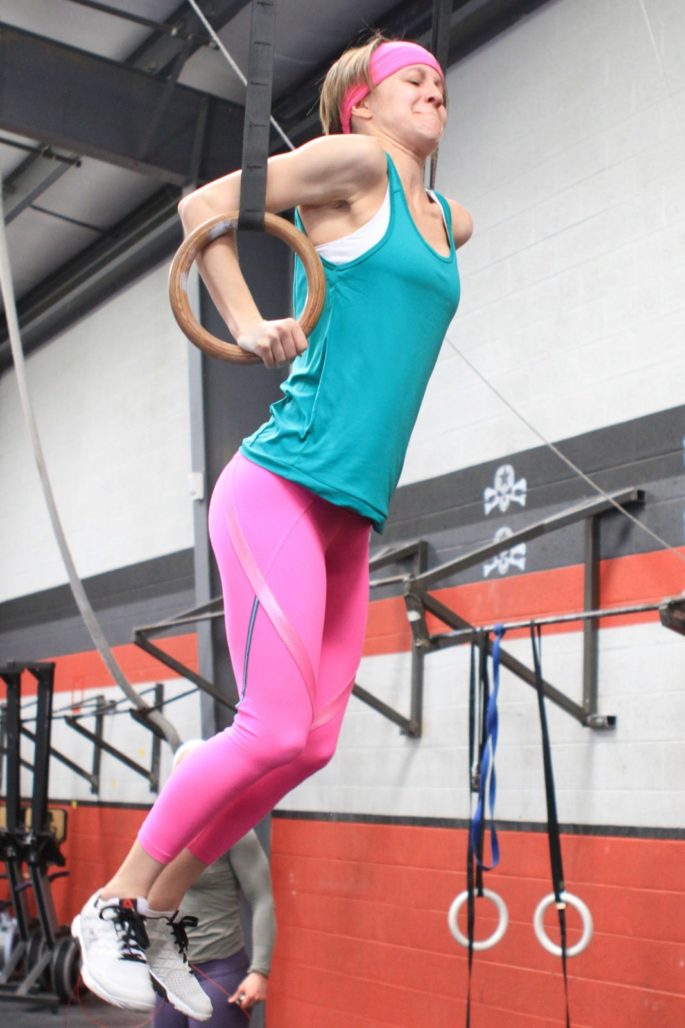 When I started this blog, I was eyeball-deep in the CrossFit world, WODing my heart out every day.  Although I tried hard not to make this space too CrossFit-centric, I occasionally commented on my life in the gym, whether it be Open workouts, outfits, or just the day-to-day grind.

But a few months ago, I quietly slipped away from the CrossFit world.  Here’s the story behind that decision and what I’ve learned from it.

How I started out with CrossFit

I signed up at a CrossFit gym in North Carolina in 2013.  I had been hearing about CrossFit for a while, and I was attracted to the fact that it was a structured group class with an emphasis on heavy movements and variety.  I hadn’t been in the fitness world for very long at that point, and it seemed like a good way to keep progressing my interest in fitness.  Sure enough, I was hooked from the start.

At the time, I was in graduate school, which was an increasingly stressful and negative environment.  CrossFit was my escape.  It was the one hour a day where I didn’t have to think about my research project or my doubts about grad school.  Throwing myself fully into a maximally intense workout was exactly what I needed to keep me sane.

Once I moved to Arizona, CrossFit continued to serve as daily “therapy” as I dealt with a long stretch of unemployment.  At a time when I had a crazy surplus of mental and physical energy to burn, it was the perfect outlet.

Besides the solace it offered, I enjoyed CrossFitting for its own sake, too.  I love having a workout that’s a little different every day, but repeatable enough to see measurable progress.  It’s awesome to have a community where people know your name and are happy to see you when you show up.  Weighted movements make me happy.  I love workouts where I can settle into “the zone” and think about nothing else.  Mr. AA is also a veteran CrossFitter, and it’s been a shared hobby that we could talk about for ages, whether that’s rehashing our daily WODs or commentating while we watch an entire weekend’s worth of competitions on TV.  Not to mention, CrossFit workouts made me look my best, too.

I paused my CrossFitting this past fall after over 3 years.  At the time, it was just a few weeks away from our wedding and honeymoon, and I had way too much on my plate.  I was barely attending WODs at all, which made my $130/month membership feel like a waste, especially with the expense of our wedding/honeymoon to contend with.  That said, I had been considering taking a break for a while.  The impending wedding just provided the extra push I needed to pull the plug. 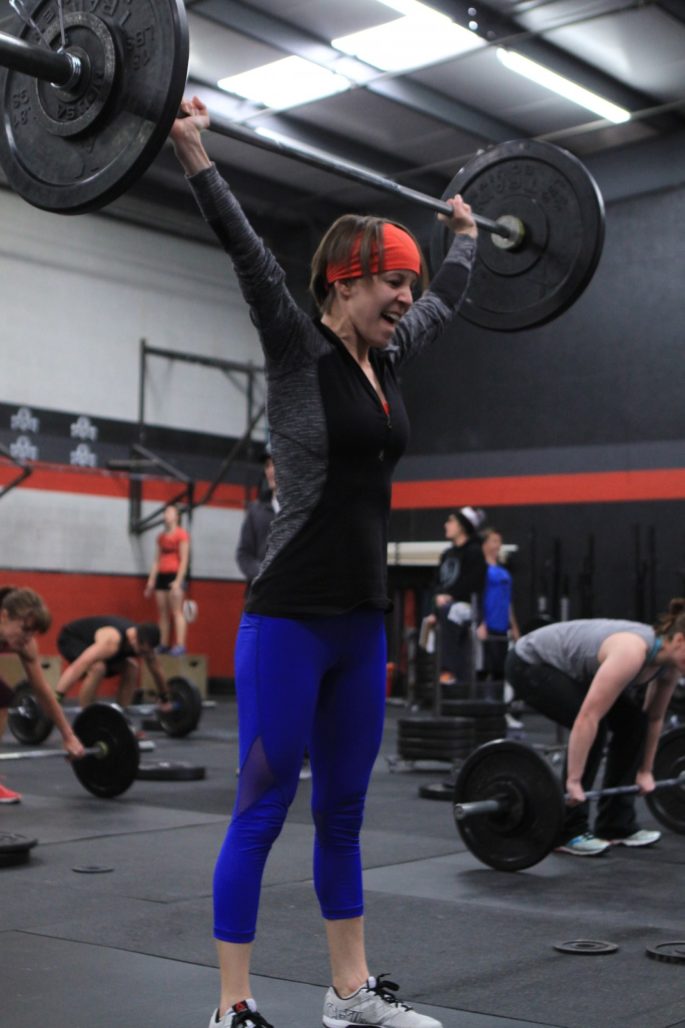 So with all these positives, why did I decide to step away?

The trouble is, many of the things that make CrossFit positive can also be negatives.

For one thing, I’ve always loved variety in my workouts.  Although CrossFit workouts don’t look exactly the same most days, the overall methodology still operates within a finite realm of specified movements and class structure.  After over 3 years, it started to feel repetitive and I itched for something different.

CrossFit had its mental and social strains, too.  I started to feel disconnected from the CrossFit community and felt like I was simply going through the motions.

The competitive aspects of CrossFit proved to be both helpful and harmful.  On the one hand, competition against both yourself and others can and does create a lot of excitement and energy.  On the other hand, for years I struggled with the fact that I felt like I was on the outside looking in, always feeling like a mediocre CrossFitter due to my unusually small stature.  Despite putting in a ton of honest-to-goodness hard work, I felt like I was never viewed as a serious athlete by others.  I’d be lying if I said that didn’t affect my self-perception as an athlete.  Although I tried hard to make peace with all this, some days it felt downright demoralizing to feel like I couldn’t achieve the level of CrossFit mastery that I desired. (I wrote some jumbled thoughts on this in a post about one of my local competitions.)

Setting all this aside, arguably my biggest problem was energy.  When you combine a full-time job, a ton of blog work, and CrossFit training, you’ve got a recipe for serious burnout.  Instead of WODing for stress relief, I had to drag myself to the gym.  Instead of being a source of excitement, hitting the CrossFit gym became a chore that I had to force myself to do.  I rarely felt like I had enough energy for a WOD, and after particularly hard days, I was virtually useless afterward.  CrossFit workouts are not only physically taxing, they can also be very mentally taxing, and I felt both in a big way. (While I was going through all this, I wrote an entire post on burnout and the strategies I was using to try to remedy it.)

It might sound silly, but it was really hard for me to make peace with taking a break.  It felt like I was giving up somehow, or betraying the CrossFit community by bowing out.  That said, now that I’ve gotten some separation, I can say that I made the right choice, at least for now.

After 8 months, I’ve gleaned some valuable insights from my CrossFit hiatus.

Even if you love doing something, it’s ok to take a step back and take a break.  If a workout you once loved (and maybe still love!) is stressing you out, you don’t have to force it.

Yes, it’s totally normal for motivation to be low some days and for you to have to draw on some discipline and diligence.  But there’s a difference between a workout routine that you occasionally don’t feel like doing versus one that becomes a consistent drain that’s always emptying your cup instead of filling it.  Learning to recognize the difference is key.

There’s no shame in taking time to regroup and reassess whether what you’re doing is working for you.  Your workouts are for YOUR health and wellbeing, not anyone else.

What I’m up to now

So if not CrossFit, what have I wound up doing instead?

After our wedding, my fitness routine was pretty hit-or-miss for the few weeks as the holidays rolled around.  I toyed with the idea of going back to CrossFit, but it still didn’t seem like the right time.  Instead, in January, I started Kayla Itsines’ 12-week BBG program.  I completed all 12 weeks of the program, although the last 2 weeks were a little bumpy thanks to a brief bout of illness and injury.

Overall, I really enjoyed the program.  Doing the 12-week challenge along with the Instagram BBG community and having the workout days written into the program (e.g., “Week 2 Friday”) gave me the accountability I needed to stay on track.  BBG did wonders to jump start me back into a consistent fitness routine, which helped tremendously with feeling (and looking) sluggish post-holidays.  I liked that I could do many of the workouts at home or at the gym depending on my schedule, and I liked that the AMRAP structure meant I could modulate the intensity depending on how I was feeling.  That said, the program whet my appetite for trying more new things, so I decided to switch it up again at the end of the program.

For the month of May, I’m participating in a fitness challenge at work, where I’m accumulating the miles for an Ironman’s worth of biking, swimming, and running by the 31st.  It’s been a great way to have a short-term goal to work toward, since it ensures I’m still making it to the gym on the regular to stay on track to hit the May 31 deadline.

In the midst of all this, I’ve been taking aerial silks classes since August.  Silks isn’t as intense of a workout compared to what I’m used to (at least not yet!), but I love taking time for a more artistic, technique-focused side of movement.  I just finished the level 2 series and plan to continue on this summer.

I’ve also started training toward another goal I’ve had for a long time.  This training routine is what will be keeping me busy for a couple months until this fall, but that topic really deserves its own post. ;)

All told, I’m not sure if or when I’ll go back to CrossFit, but what I can say is that taking time off has been really healthy for me.  I feel renewed joy and appreciation for working out.  It’s created space for me to strike a better balance between my energy levels, mental health, and fitness goals.  I’ve been able to explore more types of movement and broaden my horizons.  Although there are definitely things I miss about CrossFit, I’ve gained a lot, too.

Pic 1: an oh-so-close muscle attempt from CrossFit Open workout 15.3. (I eventually got one.  And only one.)

Pic 2: majorly PRing with a 75# snatch in Open workout 15.1, one of my most awesome CrossFitting moments.